The Strengths and Weaknesses of the Declaration of Independence

The Declaration of Independence was written by Thomas Jefferson and four other writers. It was written in June 1776. The Second Continental Congress appointed these men to make a document declaring the colonies independent from Britain. They were first called the Articles of Confederation and after the Revolution, the document was questioned. With the questioning the Constitutional Congress made some major changes. These changes although meant to strengthen, in fact, weakened the government further. The value of The Declaration of Independence depended on the strengths Jefferson gave it by his logical/emotional appeals and parallelism and the weakness that the Congress gave it.

Don't use plagiarized sources. Get your custom essay on
“ The Strengths and Weaknesses of the Declaration of Independence ”
Get custom paper
NEW! smart matching with writer

Jefferson strengthens the document by using logical appeals. But when a long train of abuses and usurpations, pursuing invariably the same Object evinces a design to reduce them under absolute Despotism, it is their right,… to throw off such Government, and to provide new Guards for their future security… such is now the necessity which constrains them to alter their former Systems of Government.

Jefferson is stating that the Colonist right to have a secure future in which there is no tyrant. This is logical because the king has become a tyrant and is pushing his will on the people. So it is the right of the colonist to overthrow the king and make a new government in which the people are ruled by themselves. The Declaration of Independence is also strengthened by emotional appeals. “… dangers of invasion from without, and convulsions within.” Jefferson uses words such as “tyrant and invasions” to make a picture of how the colonists were ruled.

Thomas Jefferson’s use of parallelism strengthened the Declaration of Independence. “He has refused….He has dissolved…He has forbidden…He has made our judges dependent on his own will alone for the tenure of their offices, the amount and payment of their salaries …” Britain’s government was so corrupt that even the judges were supposed to be a help to the people weren’t . Using parallelism, Jefferson has made the document easier to follow and when necessary, change.

The Declaration of Independence was weakened by the changes that Congress made to the document. “He has waged cruel war against human nature itself…” the passion that Thomas Jefferson had in the constitution made in stronger. Taking out these kinds of appeals made the document weaker. Congress took out these kinds of statements because it showed a more hateful past people had in Britain. Congress wanted the document to have more neutrality and be more about new beginnings. Having these points taken out caused the document to be mostly of facts and not have the passion Thomas wanted to have in it.

The Declaration of Independence was strengthened by his logical and emotional appeals and his use of parallelism but the document was weakened by the changes that Congress made. These two appeals strengthened the Declaration of Independence by showing how the colonists saw the British government. Using parallelism, Jefferson has made the document easier to follow and when necessary, change. Congress changed this document so it was about neutrality and new beginnings; they took out the passion that Jefferson had put in.

The Strengths and Weaknesses of the Declaration of Independence. (2021, Jun 15). Retrieved from https://studymoose.com/the-strengths-and-weaknesses-of-the-declaration-of-independence-essay 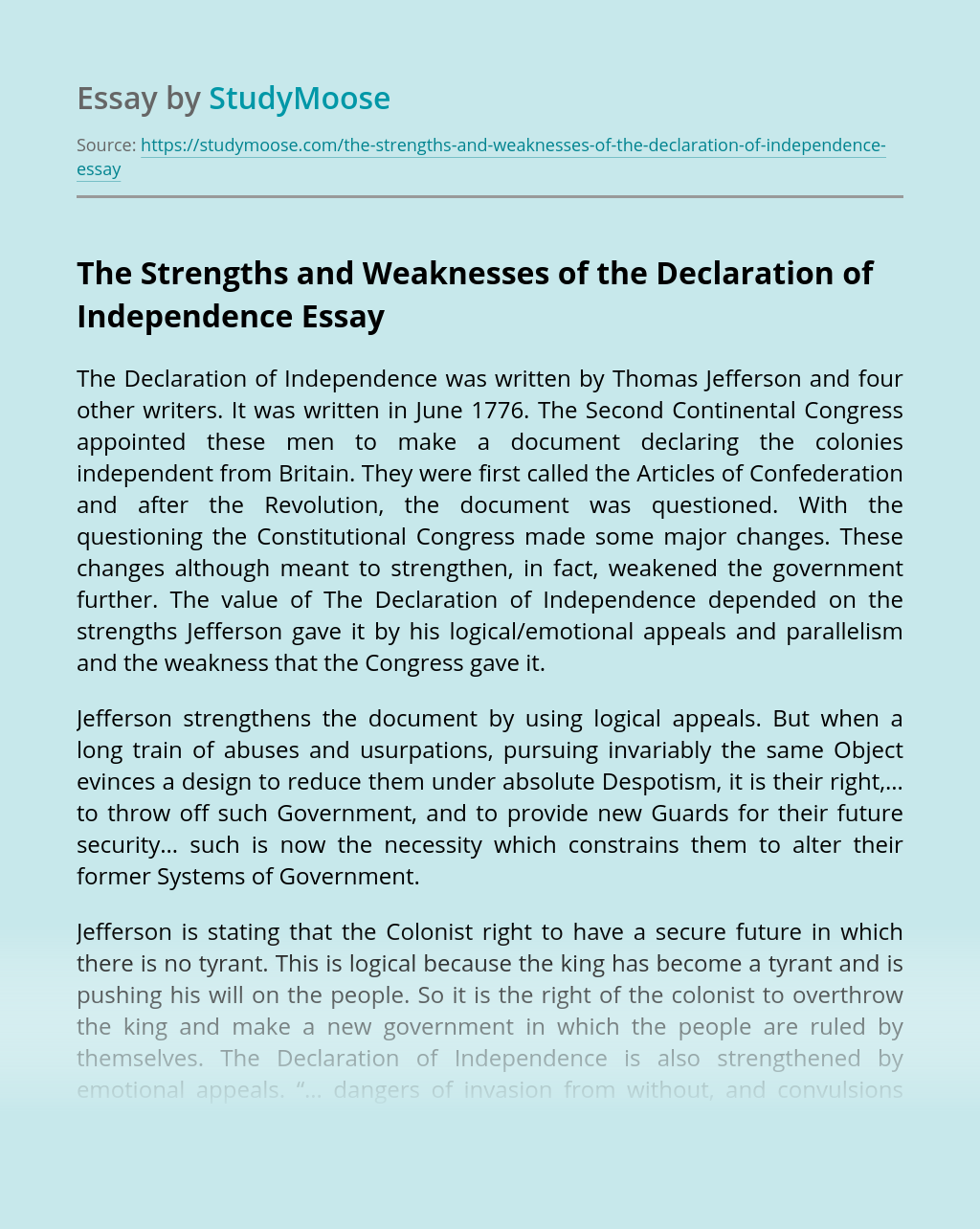