Rhetorical Analysis of the Declaration of Independence

In the Declaration of Independence, Thomas Jefferson, one of the founding fathers of the United States, explains to his readers why the colonies chose to abolish Great Britain’s government. His goal is to inform the readers that the government has certain responsibilities to the governed and that the British failed to adhere to its responsibilities to its colonists. His second goal is to justify their actions by explaining why it was not considered treason. By establishing his credibility and appealing to ethos, pathos and logos, Jefferson successfully wrote an informative, impactful, and inspirational document.

Don't use plagiarized sources.
Get Your Custom Essay on Rhetorical Analysis of the Declaration of Independence Just from $13,9/Page

In order for Jefferson to earn his readers’ support, he needs to establish his credibility. He does so by stating that “it becomes necessary for one people to dissolve the political bands” and “a decent respect to the opinions of mankind.” By acknowledging his needs of explaining to his educated readers the reasons for the colonies’ actions, he shows them that he is an intelligent man of good character and good intentions.

In the second paragraph, Jefferson stated “Prudence, indeed, will dictate that Governments…” to emphasize that he is cautious and reasonable. Before listing the grievances, he stated “let Facts be submitted to a candid world.”

He wishes to share them to an honest and sincere world to establish a common ground with the audience. After listing the grievances, he guaranteed the readers of the colonists’ honest efforts to fix the conflict without having to separate by asserting “We have petitioned for Redress in the most humble terms: Our repeated Petitions have been answered only repeated injury.” He continues by affirming that the colonists have tried to appeal to the King and “our British brethren.” His usage of the word “brethren” shows that he is humble, respectful, and good willed. He concludes the declaration with an honorable avowal which states that the representatives of the United States of America are willing to pledge “our Lives, our Fortunes and our sacred Honor” for the principles spoken in the declaration. In Jefferson’s declaration, both the organization and the use of logic are effective and adequate. He begins with the colonists’ fundamental beliefs that “all men are created equal, that they are endowed by their Creator with certain unalienable Rights.” He addresses that the role of the government is to secure and protect the rights of the people. As he proceeds, he states that if the government fails to “secure these rights,” then “it is the Right of the People to alter or to abolish it, and institute new Government.” Jefferson then creates a list of ways in which the British government has violated and stripped the colonists of their rights.

Through the inductive proof, he explains the reason in which the colonists must become independent from Britain to gain freedom and to be treated fairly. The list of grievances strongly appeals to his audience’s emotions. Jefferson utilizes a powerful, emotional diction to implement the colonists’ sentiments toward the King’s character into his writing. He uses certain words such as tyrants, invasions, murders, abdicated, death, desolation, cruelty, barbarous, and destruction. These words make the audience establish a sympathetic feeling towards the colonists and that the King is “totally unworthy [to be] the Head of a civilized nation” and “unfit to be the ruler of a free people.” Jefferson emphatically proves the injustice and brutality of the King and Parliament.

Based on the Declaration of Independence, Elizabeth Cady Stanton drafted the Declaration of Sentiments and Resolution to express freedom to the American public for equality with men under the law, in education and employment. Stanton explains to her readers why depriving women from their rights is unconstitutional and unjust. Her first goal is to convince the men and women of the United States in the support of women’s rights movement. . Her second goal is to demand the rights of women as right-bearing individuals be recognized and respected by society. By utilizing logical argument, establishing her credibility and appealing to the audience’s emotions, Stanton is able to convey a sense of endorsement.

Stanton modeled her declaration with the Declaration of Independence to illustrate that her list of logical arguments are simple and clear. She states that “we hold these truths to be self-evident: that all men and women are created equal…” to address that every human being is created with the same qualities; thus, women should not be treated differently. She understands that her audience knows the “inalienable rights” that the government must protect and secure. Believing in this belief, Stanton wants the audience to question why women are not awarded with rights when both sexes are claimed to have been given by the Creator. Her references to religion effectively force the audience to believe that the laws created by the government displease God and his law of equality. Stanton proceeds to list the grievances that women experienced in the United States. Her use of diction and syntax evoke certain emotions out of the audience. Similar to the Declaration of Independence, Stanton uses repetition in her list to emphasize and impact the audience emotionally.

In the list, Stanton states that “he has monopolized nearly all the profitable employments…she receives but a scanty remuneration.” This is one of the oppression that effectively appeals to the audience’s emotion. She wants her readers to feel sympathy over what it is like to work tirelessly for long hours to not being able to keep the money. Stanton uses powerful languages such as “civilly dead” and “long train of abuses and usurpations” to persuade the audience to see her point and join the movement. For Stanton’s argument to work, she has to earn her readers’ trust. She knows that most of the women will support her demands; however, she especially needs to gain the support from men for the argument to be more effective. She establishes credibility by utilizing similar words from the Declaration of Independence to demonstrate that she is intelligent. In the last paragraph, she states “we insist that they have immediate admission to all the rights and privileges…” to show that she is humble and courteous. She is not asking to take anything from men, but rather she is simply insisting that women get the same rights as men.

Both drafts consist of definite logical arguments, well-organized ethical and powerful emotional appeals. Thomas Jefferson and Elizabeth Cady Stanton successfully utilize a wide range of elements to draw the audience and convince them to support their cause. Their passion and determination to gain freedom while experiencing the obstacle of unequal rights were strongly expressed in their writings. Although rhetoric is used by many to create a negative connotation, authors utilize rhetorical strategies to achieve their purpose of persuading or informing an argument.

Thomas Jefferson was able to eloquently draft an inspirational and resounding declaration formed the basis for the American Revolution. His declaration became a significant role model for other countries and people who were experiencing similar conflicts such as France and women. By implementing rhetorical devices, he was able to convince many Americans that independence, which they first apprehended as evil, was in truth a benediction.

Rhetorical Analysis of the Declaration of Independence. (2016, Jun 02). Retrieved from https://studymoose.com/rhetorical-analysis-of-the-declaration-of-independence-essay 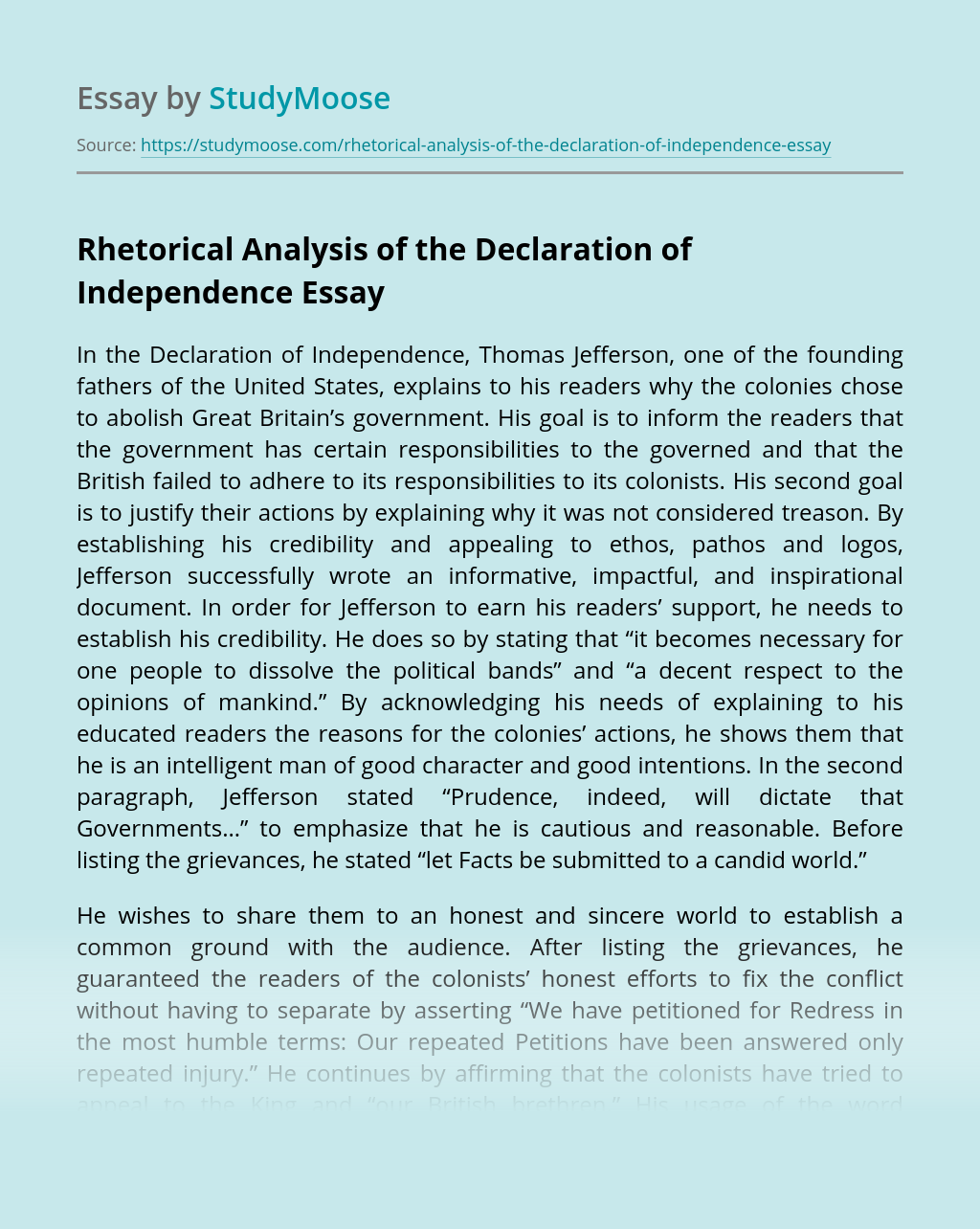 Directions: Answer the following questions, integrating your assigned readings and the videos you watched this week. Seek outside sources, as needed, to support your ideas. Be sure to cite your sources in-text and include a reference page at the end of the assignment, in APA format. When you are finished, upload the completed assignment via...

From day to day, our world has been changed gradually from one condition to another. Nowadays, technology has advanced in huge leaps and bounds. We cannot imagine the world without technological advances such as computer, televisions, and machines and so on. However there are some advantages and disadvantages of technology. First, technologies play an important...

View sample
Get Essay
The Purchase of Alaska

My dear countrymen, I strongly believe that the purchase of Alaska will help America in a number of ways. This bargain will prove fruitful for our country geo-strategically, in respect of natural resources and open numerous business avenues as well. At present our country is passing through difficult times and this move is definitely in...

1.1 Explain what reflective practice is It means focusing on how we interact with others. Thinking about how we could have done things differently, in a better way. This allows us to improve the action we take. 1.2 Explain the importance of reflective practice in continuously improving the quality of service provided see more:explain how...

At present, there is a rising load demand for electric power which can lead to major problems, such as voltage collapse, blackout, grid outage. The most important constraint in the power systems is a huge transmission capability joint through a voltage shape surrounded by the boundary at which consumers function. To overcome from this problem...