Students motivation is one of the most important factors influencing how much they learn. As you read the following case study, which involves a world history teacher who has her class involved in a unit on the Crusades, consider what she does to influence her students motivation. Motivation is a force that energizes, sustains and directs behavior toward a goal ( Brophy, 2004; Pintrich & Schunk, 2002), and researchers have found a positive and robust correlation between motivation and achievement ( McDermott, Mordell & Stoltzfus, 2001; Wang, Haertal & Walberg, 1993; R.

Don't use plagiarized sources. Get your custom essay on
“ Students Motivation ”
Get custom paper
NEW! smart matching with writer

Children’s motivation to learn lies at the very core of achieving success in schooling. Given rapid technological advances, an ever-changing knowledge base, and shifting workplace needs, a continuing motivation to learn may well be the hallmark of individual accomplishment across the lifespan. In general, motivated students have more positive attitudes toward school and describe school as satisfying. Other than that, persist on difficult tasks and cause fewer management problems. Students also able to process information in depth and excel in classroom learning experiences ( Stipek, 1996, 2002) .

Not surprisingly, motivated students are a primary source of job satisfaction for teachers. Motivation can be described in two broad categories. Extrinsic motivation is motivation to engage in an activity as a means to an end, whereas instrinsic motivation is motivation to be involved in an activity for its own sake.. extrinsically motivated learners may study hard for a test because they believe studying will lead to high test scores, for example; intrinsically motivated learners study because they want to understand the content and they view learning as worthwhile in itself.

Research indicates that intrinsic motivation is preferable because of its focus on learning and understanding (Brophy, 2004). Extrinsic and intrinsic motivation are also contextual and can and can change over time. Researches have determined that learners are intrinsically motivated by activities or experiences that * Present a challenge. Challenge occurs when goals are moderately difficult, and success isn’t guaranteed. Meeting challenges is also emotionally satisfying. * Provide the learner with feeling of autonomy.

Learners are more motivated when they feel that they have command or influence over their own learning. * Evoke curiosity. Interesting, novel, surprising or discrepant experiences create intrinsic motivation. * Involve creativity and fantasy. Experiences allow learners to personalize content by using their imaginations. In addition, some researches suggest that aesthetic experiences those associated with beauty that evoke emotional reactions may be intrinsically motivating as well ( Ryan & deci, 2000).

Behavioral view of motivation Behaviorism views learning as a change in behavior that occurs as a result of experience. An increase in studying or learning behaviors is viewed as evidence of motivation ( Pintrinch & Schunk, 2002), so reinforcers, such as praise, comments on homework, high test scores, and good grades, are motivators. Using Rewards in Classrooms Although the use of rewards in classrooms is controversial ( Kohn, 1992, 1993b, 1996b), it is still common ( Eisenberger et al. , 1999).

Rewards commonly used in elementary classrooms include * Approval, such as teacher praise or being selected as a class monitor * Consumable items, such as candy or popcorn * Entertainment , such as playing computer games * Success in competition, such as being the first to finish a game or drill In middle and secondary classrooms, common rewards are * High test scores and good grades * Teacher comments on papers * Teachers compliments delivered quietly and individually * Free time to talk to classmates

Criticism of Behavioral Approaches to Motivation The use of rewards as motivators as criticized on three grounds. One is philosophical; critics argue that schools should cultivate intrinsic motivation and believe that using rewards sends students the wrong message about learning. A second is based on research indicating that the use of rewards decreases interest in intrinsically motivating tasks. A third and perhaps the most significant, is the fact that behaviorism provides an incomplete explanation for motivation.

Behaviorism treats learning and motivation in the same way and although they are closely related, they are not identical. Reinforces can be extrinsic motivators, but their effects are not automatic; rather, they depend on learners, expectation, beliefs and other thoughts. If students reinforcement histories are inconsistent, if a student believes he cant complete a difficult assignment, he will be unlikely to work hard on it despite being reinforced in the past for completing assignments.

Since behaviorism doesn’t consider cognitive factors such as learner beliefs, the theory cant explain why the student isn’t motivated to complete the assignment. Humanistic Views of Motivation In the first half of the 20th century, our understanding of motivation was dominated by two major forces: behaviorism and psychoanalysis. As we saw in the previous section, behaviorism focuses on reinforcement as an explanation for motivation. Psychoanalysis, influenced by the famous Sigmund Freud (1856-1939), described people as motivated by unconscious drives and directed by an id, ego and superego.

Humanistic psychology developed as a reaction against this “reductionist” thinking; instead, it emphasizes the total person – physical, social, emotional and intellectual. Abraham Maslow ( 1968, 1970, 1987) one of the founders of the humanistic movement, developed a hierarchy reflecting the needs of the “ whole person”. For instance, we see the physical person in survival and safety needs; the social person in belonging needs; the emotional person in self-esteem needs; and intellectual, aesthetic, and self-actualized persons in growth needs.

Maslow’s work , while attractive, is controversial. The lack of research evidence to support his description of needs is one of the most commonly voiced criticism ( Pintrich & Schunk , 2002 ) . A second is his hierarchy’s inconsistency and lack of predictive ability. For instance, we’ve all heard of people with serious illness or disabling conditions which suggests that their deficiency needs are not being met- who accomplish significant intellectual or aesthetic achievements and who seek order, truth and beuty in their experiences.

Maslow’s work would predict that this could not happen. Cognitive Theories of Motivation Cognitive theories of motivation focus on learners beliefs, expectation and needs for order, predictability and understanding. The need to understand is at the heart of cognitive motivation theory: “ Children are naturally motivated to learn when their experiences is inconsistent with their current understanding”. Cognitive theorists suggest that each is motivated by the new understand and make sense of the world. Piaget described the need for understanding in his concept of equilibrium.

When people cannot experiences using their existing schemes, they are motivated to modify the schemes. The cognitive motivation theories discussed in this section describe general patterns of motivation. However, not all students or groups of students will fit these patterns. These behaviors all indicate an innate desire to understand the way the world works. In the following sections, we examine five cognitive theories of motivation: Expectancy x Value Theory * Develop expectation for success by giving students only as much help as they need to make progress on challenging tasks.

Teacher’s personal characteristic, the kinds of classroom environment they create, and the way they teach can have important influences on their students motivation to learn. To develop belief in students heart teachers have to create a learning- focused environment. A learning-focused environment emphasizes effort, continuous improvement and understanding. It is very different from a performance-focused environment, which makes high grades, public displays of ability and performance compared to others priorities ( Covington, 2000; D. M. Ryan & Patrick, 2001). 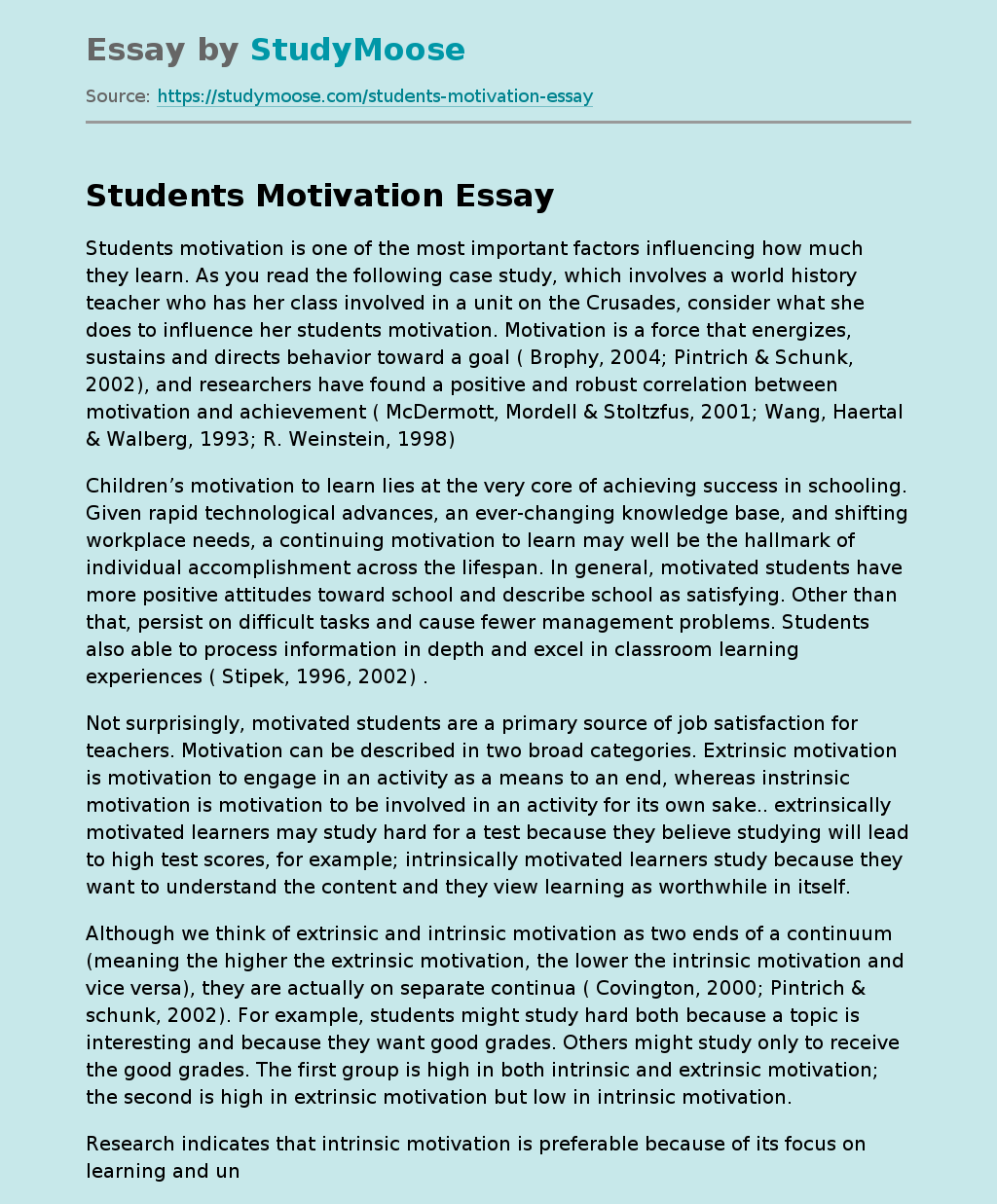