For my art observation I went to preschool. I observed a Jr. Kindergarten class that consisted of 12 students between the ages of 4 and 5. It was a Monday, Tuesday, Wednesday class. The day that I observed the students and teachers sometimes (as well as the whole school) were a little distracted, because it was picture day. So after the students took their pictures they did their art activity so that they wouldn’t have to stop and they wouldn’t get dirty for the picture.

Don't use plagiarized sources. Get your custom essay on
“ Art Observation ”
Get custom paper
NEW! smart matching with writer

Overall, the art activity was enjoyed by both teacher and student and was developmentally appropriate. First, the teacher got the children to sit down at their table before she stared to explain the activity. The tables were side by side with 7 chairs around each table. (The tables were also covered with a plastic to help make the clean up easier. ) Their letter of the week was “g”, so the teacher started out by asking them what words started with the letter “g”.

Many students raised their hands and answered correctly.

They had been learning about the letter “g” all week, so they were able to recognize a few words. Then, the teacher brought out an example of a picture of a goat on a brown paper lunch bag, and the students started to ask her what color a goat was. She had the paper helper pass out the papers to the children, which caused a little dilemma of “that paper wasn’t for you” ,”but you put it in front of me”, etc.

Each student had already brought out their separate pencil boxes filled with crayons, markers, scissors and glue sticks.

The children started color their goats any color they wanted without really referencing to the example. While the children were working the teacher read the story of The Three Billy Goats Gruff. The children were interested in both activities. Sometimes they would stop to ask questions about the book and the pictures. The book was small though, and students complained about not being able to see. The teacher had to walk around and show them the pictures.

The students were happy to have the story. The students had done this art project before, but with different animals that started with different letters. After the students were done coloring, they cut out the pictures without having to be told to. Then they used the glue sticks to attach them to the brown bags. The teacher was continuously asking questions about the letter “g” and goats. When they were done with the project, they put their names on it and put it in their cubbies. hose who were done earlier than other moved on to the next activity and then after that free play. They were all excited to show off their goat puppets. During the whole activity, the children were talking to each other and telling stories. The teacher was constantly walking around helping and observing. In this activity the children were cutting, gluing, coloring, and writing their names. There were things that I did not agree with , such as the example and the repeat project, but the experience was entertaining for all in the classroom. 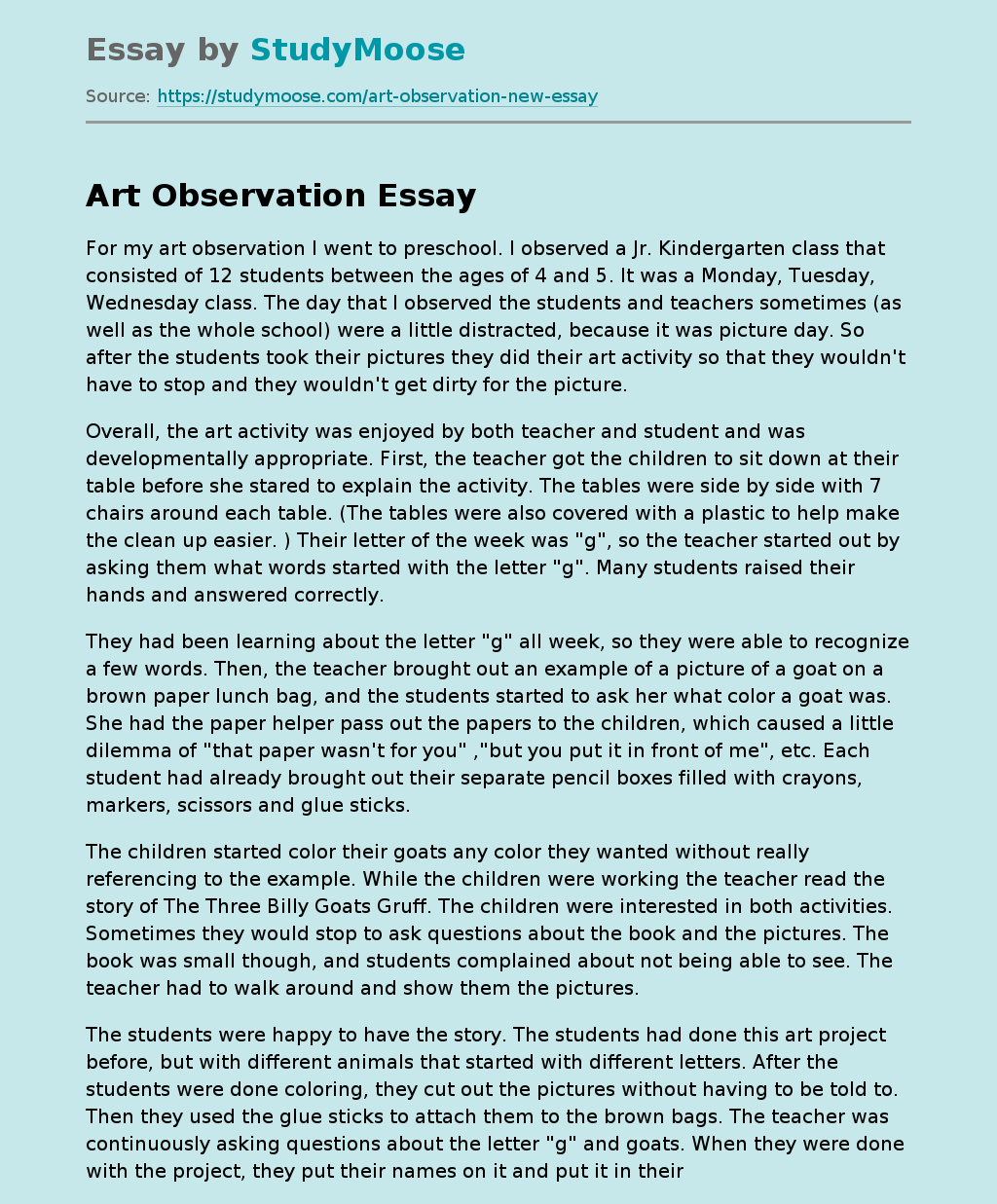