In the words of Socrates, the Great Greek philosopher, “The unexamined life is not worth living”. One of the major things that distinguish man from other animals is his ability to ruminate. To be is to be conscious and to be conscious means to be fully aware and thoughtful. In a world where different belief systems are flying around, man needs to test all things and hold on to that which is certain. We should pattern our lives in such a way that we separate truth from illusion and make decisions after careful or critical consideration.

Turn in your highest-quality paper
Get a qualified writer to help you with
“ Philosophical Reflection ”
Get high-quality paper
NEW! AI matching with writer

Philosophical reflection is the careful examination of life situations. This involves the weighing of several alternatives and using specific standards to evaluate one’s actions. A man reflects philosophically when he is able to build on previous actions, events, or decisions. This essential attribute spells the difference between man and other lower animals whose basis of action is their feeling. Making an assessment of my life, i will say that philosophical reflection has been a part of my life.

I learnt the importance of making the right choices early in life. My father used to tell me; “You are what you do”. I guess this made me develop a cautious attitude towards making decisions and evaluating issues before coming to a conclusion. I have grown up to see things from different points of view. I do not accept a view because of who said it, rather, i put all things into scrutiny in order to hold on to that which is true.

Before making a decision, i draw up a probable conclusion on the eventualities and weigh up the effect of my actions. I believe the wisest of men can learn from a fool and in view of this, i do not write-off anybody. I carefully and critically examine a pre-existing belief before incorporating it as my belief system. As i have discovered, many of the things people believe are lies and illusions. I do not attach sentiments to whatever i do because this will lead my judgement astray.

The Oxford English Dictionary defines philosophy as “Knowledge, learning, scholarship; a body of knowledge; spec. advanced knowledge or learning.” By this definition we can gather that philosophy is, essentially, the pursuit of knowledge or understanding on a much higher level than usual. In the following paper I will present my views on philosophy as a whole by examining what I believe philosophy is supposed to do, as well as how it can benefit the life of any individual willing to invest time in it and the societies that promote such thoughts.

Ever since its very beginnings in 6th century BCE, philosophy has been used as a tool to help better understand complex questions regarding logic, knowledge, truth, and even human existence itself. I have long considered philosophy to be a method of deeper understanding when it comes to the human life. Why is this? Perhaps it is because a large part of philosophy is focused on argument, debate, and overall interaction with fellow humans, as opposed to other methods that do not focus on these aspects. It is my belief that if we were to attempt to answer by ourselves the difficult questions life poses, then our lives would be very dull and difficult to properly question.

Allow me to expand on what I briefly mentioned at the end of the previous paragraph. Each and every one of us is, in my opinion, a prisoner of our respective perception. From birth our minds are plagued by outside influences that shape our mind regardless of how much we try to avoid it. These influences can take on many different forms such as: media, parents, teachers, etc. What ideologies these influences plant in our minds also depends on a number of variables such: nationality, class, race, etc. This, in turn, leads to bias and prevents anyone from being 100% subjective in any matter. We cannot know any one thing or pass off one of our perceptions as absolute truth.

In fact, what you are currently reading is only my interpretation of what I have perceived. Therefore, the only way to truly gain an improved understanding of our life and the world we live in is to explore our different perceptions by sharing and challenging these views with others in debate and/or argument. As Socrates once said, “The unexamined life is not worth living.” In other words, if you are not going to break out of your own prison of perception, then your life will be bland and very difficult.

Approaching matters in a philosophical fashion is great for people as individuals, but it is also extremely important in societies as a whole. When members of a particular society strive to be thoughtful of their own views instead of just bashing the views of others, then there is an increase of tolerance and open-mindedness. Through this tolerance the society can then obtain a higher sense of fraternity and respect for one another. Societies that promote debate and an open-minded outlook tend to be more democratic and infringe on the rights of the people less.

Take Ancient Greece for example, Ancient Greece is where philosophy was born and just also happened to be unlike any other society at the time. Slavery did exist and the women were not considered true citizens, but when compared to other, much more tribal cultures at the time, the Greek people experienced a freedom unheard of in any other part of the world. Modern countries would do well to incorporate philosophy in areas such as: government/politics, education, etc., and thankfully many do.

Given the topics discussed in this paper, I find it hard to believe that the introduction of philosophy into one’s life would not be beneficial in many ways. Analysis and consideration of all views, the careful contemplation of oneself and the environment around them, and the intellectual freedom and open-mindedness that such a practice lends to the societies it is promoted within. I can say with confidence that I believe philosophy is an integral part of human life and should be promoted on an international scale in order for countries to work together to logically solve global problems. 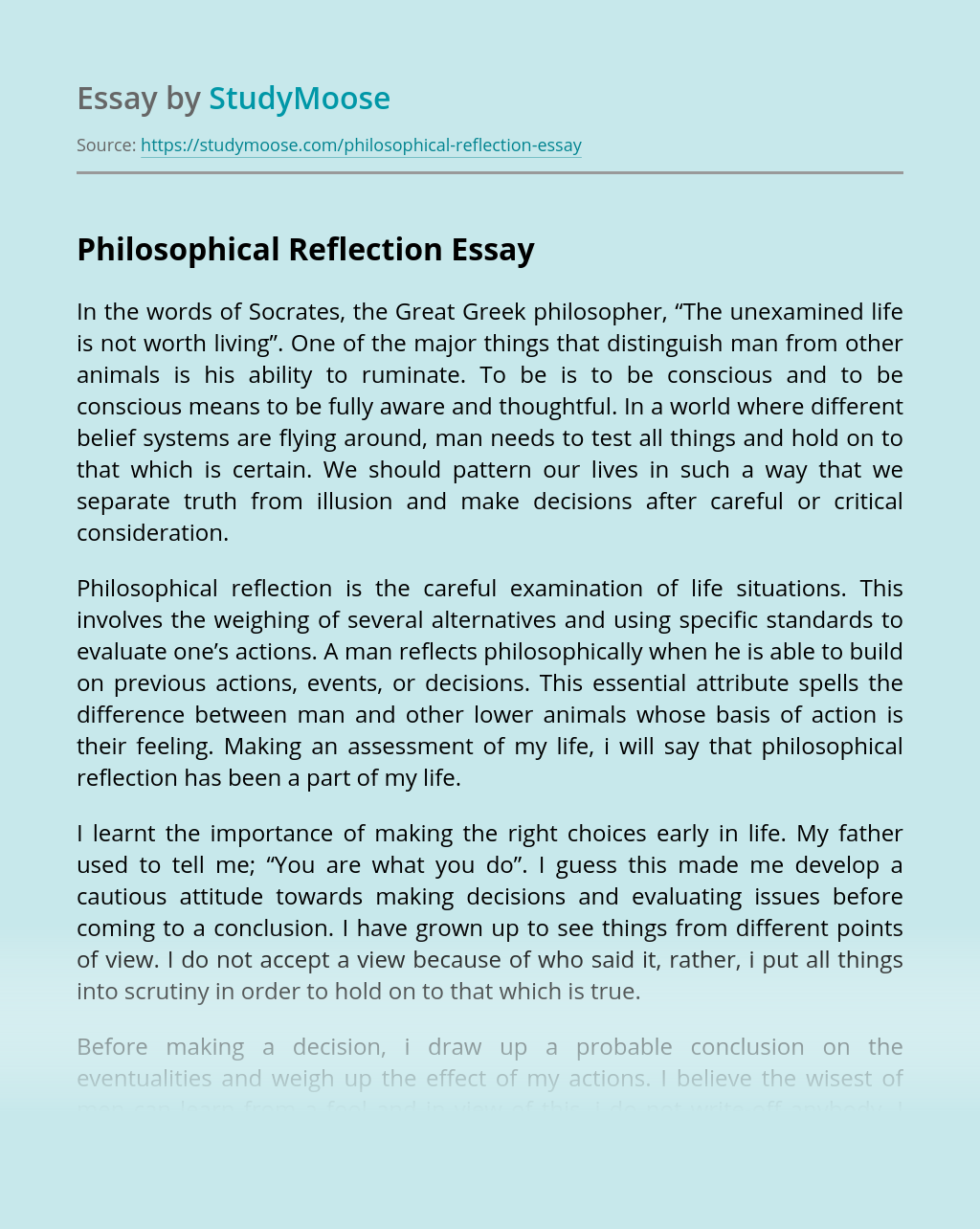 Turn in your highest-quality paper
Get a qualified writer to help you with
“ Philosophical Reflection ”
Get high-quality paper
Helping students since 2015
Stay Safe, Stay Original