Paz Marquez-Benitez, a Filipina writer born in 1894 in Lucena City, Quezon, authored the first Filipino modern English-language short story, Dead Stars, published in the Philippine Herald in 1925. Born into the prominent and affluent Marquez family of Quezon province, she was among the first generation of Filipinos trained in the American education system which used English as the medium of instruction. She graduated high school in Tayabas High Schooland college from the University of the Philippines with a Bachelor of Arts degree in 1912.

Don't use plagiarized sources. Get your custom essay on
“ About Dead Stars ”
Get custom paper
NEW! smart matching with writer

She was a member of the first freshman class of the University of the Philippines, graduating with a Bachelor of Arts degree in 1912. Two years after graduation, she married Francisco Benitez, with whom she had four children. Márquez-Benítez later became a teacher at the University of the Philippines, who taught short-story writing and had become an influential figure to many Filipino writers in the English language.

The annually held Paz Marquez-Benitez Lectures in the Philippines honors her memory by focusing on the contribution of Filipino women writers to Philippine Literature in the English language. Though she only had one more published short story after ―Dead Stars‖ this of which is entitled ―A Night In The Hills,‖ nevertheless, she made her mark in Philippine literature because her work is considered the first modern Philippine short story.

For Marquez-Benitez, writing was a life-long occupation. In 1919, she founded ―Woman’s Home Journal‖, the first women’s magazine in the country. ―Filipino Love Stories‖, reportedly the first anthology of Philippine stories in English by Filipinos, was compiled in 1928 by Marquez-Benitez from the works of her students.

When her husband died in 1951, she took over as editor of the Philippine Journal of Education at UP. She held the editorial post for over two decades. ―Dead Stars‖ is the 1925 short story that gave birth to modern Philippine writing in English.

TRIVIA: Dead Stars had been praised as ―a model of perfection in character delineation, local color, plot, and message.‖

Since the author’s life and experiences is not significant to the content of the short story, MoralPhilosophical as a literary lens was applied. This is an approach that puts literature as one that teaches morality and explores philosophical issues. By looking and analyzing Benitez’ ―Dead Stars‖ the short story reflects the time in which the literary work was written along with the language, the norms and the way people think. It serves as a literary time machine for readers as it enables them to understand how courtship, marriage and fidelity were viewed through the early 1900 standards. It renders a sound comparison between the past and the present, the existing modern culture and the fading, almost obsolete tradition.

I could say that the philosophical principle of the story is love. This is further compared to the concepts and dialogues of the characters in the story like the concept of engagement and marriage, the dialogue of Esperanza which is ―I am not blind, or deaf; I see and hear what perhaps some are trying to keep from me‖ and also ―If you are tires of – why don’t you tell me you are tired of me‖, the words of Alfredo to Julia which are ―I could study you all my life.‖ and ―Nothing? There is you.‖ and the concept in which Alfredo had been seeing light of the dead stars and the immense sadness that invaded his spirit. These concepts and words from the characters of the story bring the force this unifying thread: Love is like a puzzle, it is confusing and mind blowing for it can be gained and it can also be lost in a snap of a finger.

EXEGESIS ―Was he being cheated by life? Love—he seemed to have missed it! Or was the love that others told about a mere fabrication of fervid imagination, and exaggeration of the commonplace, a glorification of insipid monotonies such as made up his love life? Was love a combination of circumstances, or sheer native capacity of soul? In those days love was, for him, still the eternal puzzle; for love as he knew it, was a stranger to love as he divined it might be.‖ –Alfredo Julia is quite different from Esperanza—―a girl striking and vividly alive, the woman that could cause violent commotion in his heart, yet had no place in the completed ordering of his life.” The rare-turnedregular neighboring trips lead Alfredo to deep conversations with Julia and hence, develop an admiration for the woman. Sometimes, he would forget he is engaged, continuing his meetings with Julia while thinking that Esperanza ―was not prone to indulge in unprovoked jealousies… (for) she was a believer in the regenerative virtue of institutions, in their power to regulate feeling as well as conduct‖.

Unfortunately, he also forgets the fact that Esperanza is a woman and, being so is already a risk factor for jealousies, provoked or otherwise. ―I do not understand you at all! I think I know why you have been indifferent to me lately. I am not blind, or deaf. I see perhaps some are trying to keep you away from me… Whatever my shortcomings, and no doubt they are many in your eyes, I have never gone out of my way, out of my place to find a man.‖ – Esperanza Julia is in love with Alfredo. That much is pretty obvious in the story, especially after learning belatedly that Alfredo is engaged. An unconscious believer himself in the regenerative virtue of institutions, Alfredo still marries Esperanza. Over the years, he becomes an impassive husband. I feel sad for both of them but must I say they brought it upon themselves? Alfredo, for one, does not really know what he wants and so he lives his life as it comes. He was not unhappy in his marriage. He felt no rebellion: only the calm of capitulation to what he recognized as irresistible forces of circumstance and of character… From his capacity of complete detachment he derived a strange solace… At such times did Esperanza feel baffled and hopeless; he was gentle, even tender, but immeasurably far away, beyond reach. –Alfredo Eight years later, he still could not forget Julia. So while on business, he makes a side trip to Julia’s hometown to check if he had meant anything to her and her to him. Julia has not married. This implies many things—one of which could be that she is still in love with Alfredo but chooses not to fight for that love because she was taught that the act of giving through self-denial is a good thing and so she turned from a spirited young woman into a boring one living a boring life after she lost Alfredo to propriety and social order. What did Alfredo find during his meeting with Julia after his marriage?

Dead stars So that was all over. Why, why hade he obstinately clung to that dream from the weariness of actuality? And now, mere actuality had robbed him of the dream. So all these years—since when?—he had been seeing the light of dead stars, long extinguished, yet seemingly still in their appointed places in the heavens. -Alfredo Alfredo has been clinging onto something that is unattainable because he is bored with the predictability of his life. Julia was a like a star, brimming his dull life with light and excitement for a short time. Because of the choices they made, Julia and Alfredo (and even Esperanza) become dead stars.

It is in this section of the paper where Formalism as a literary lens was used. This is the key to grasp the meaning of the text exists within the text itself. It involves elemental exploration of the literary piece via explication and exegesis. If one will look and interpret the story, Dead Stars is a love story written in prose with a heart-warming message. It is told from the perspective of Alfredo Salazar who is in personal conflict with his feelings towards two women—Esperanza, his fiancée of four years, and Julia Salas whom he met while ―neighboring‖.

Esperanza is the embodiment of the ideal wife to the ideal man, and so they make an ideal couple in the eyes of society. Alfredo has pursued her at the start of their relationship with intense courtship, but later on, the feeling seems to subside. These interpretations of the poem based on the views of the author bring to the force unifying thread: Our decisions or choices in life can make us dead stars – we are living in our delegated places in the society but not actually glimmering, not actually living our lives.

It is in this part of the paper where STRUCTURALISM as a literary lens was employed. This is an approach which asserts that literature is a text. A particular structure of language produces reality. This further includes literary interpretation via binary opposition (concepts in opposition) and signification (signifier and signified). Through simply looking into and interpreting the lines of the short story ―Dead Stars‖, we could say that the two opposing concepts are NEED and WANT which we could say that these two entities are powerful and supreme. These interpretations of the poem say that: For the sake of reputation, a man will do the things he ought to do even though he does not wholeheartedly like what he need to do thus he is not living and building a life rather he is just living to survive. 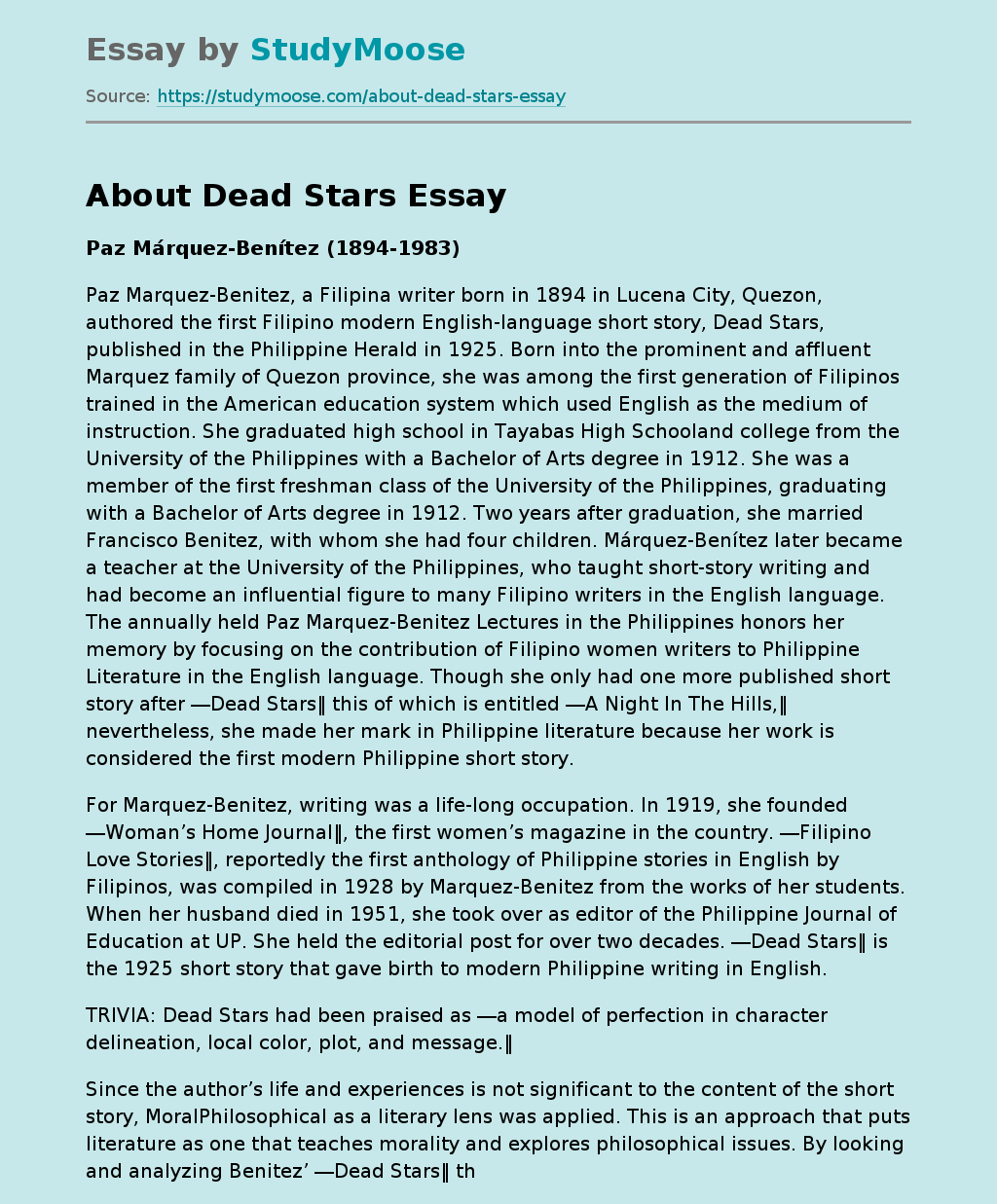