The Fault in Our Stars

John Green is the New York Times best-selling author of Looking for Alaska, An Abundance of Katherines, Paper Towns, and The Fault in Our Stars. John Green has written some very unique pieces of literature, such as; This Is Not Tom, which is written completely in riddles. He also wrote a long short story called Let It Snow. John Green has done several radio interviews and he has done several interviews with young fans of his. John Green is a very popular and talented author; reaching the hearts of many teenage boys and girls because his novels relate to all of the issues that teens go through.

In the novel The Fault in Our Stars written by John Green, the main character and narrator of the story, Hazel Grace, is cancer ridden and is terminally ill. Hazel is like any typical 16 year old girl; constantly thinking and worrying about love, boys, and lust. Hazel attends a support group that is necessary to help her fight the cancer that has taken over her body, according to her parents.

At support group she meets this charming, handsome, irresistible boy whose name is Augustus Waters. Augustus had cancer and is attending the support group because his friend Isaac, who has cancer of the eye, made him go.

Augustus takes Hazel to his house to watch a movie and Hazel begins to fall for him immediately. Augusts begins to fall for Hazel, too. Coping with illness and death is a difficult issue for anybody but it is particularly harder for teenagers to cope with.

John Green focuses on the complex issues of life, death, and love in teenage boys and girls. Coping with illness and death is a difficult issue for anyone but particularly with teenagers. In Chapter six, Hazel says, “I’m like. Like. I’m like a grenade, Mom. I’m a grenade and at some point I’m going to blow up and I would like to minimize the casualties, okay?” Hazel feels like she is a grenade because she is terminally ill so she does not want to hurt anyone, especially Augustus and her parents. Hazel ends up in the hospital because her lungs were filled with fluid again and she could not breathe, compliments of the cancer, and she began to wonder if Augustus would really be okay if she died.

She wanted so badly to not be a grenade and a malevolent force in the lives of the people that she loved. Hazel wanted not to love Gus and did not want to fall for him, but it was too late. So, she gives up that thought and wants to be with Gus because he wants to be with her. The novel touches on subjects that most teenagers relate to or have dealt with, such as: love, life, illness, and eventually death. Teenagers deal with some serious turning points in their lives that will have an impact on them until the day they die. First loves, deaths, life itself impacts every teenager. Coping with illness and death is a difficult issue among Hazel and Gus. While Gus and Hazel are in Amsterdam, Gus starts to feel the cancer creeping up on him; getting ready to snatch him from Hazel’s arms. Hazel begins to realize why she never wanted to love anybody or have anybody love her. She is a grenade and Gus is a grenade. Hazel uses this to describe herself because she is going to die, and it is inevitable. When she does die, she will hurt everyone that she has ever known in many ways.

Hazel is so afraid of being hurt and taking risks and she does not want Augustus to be her grenade. Hazel realizes that Augustus’s death is inevitable. As Gus’s condition worsens and he starts to deteriorate, all of his friends and his loved ones begin struggling to cope with the reality that he is going to pass away fairly soon. Augustus tries very hard to be strong for Hazel all throughout the novel. Gus supports her and shows that he really does care about her. In Chapter four, Augustus explains to Hazel and his friend Isaac, “That’s the thing about pain… it demands to be felt.” Gus tries to convince Isaac, who had just lost both his eyes due to cancer and Hazel who was just in the hospital, that pain needs attention. Pain can never be ignored, it will always be felt, and everyone dealing with pain just has to know how to make it into something positive. In Chapter two, Augustus and Hazel are talking and he says to her, “Don’t tell me you’re one of those people who becomes their disease. I know so many people like that. It’s disheartening… But surely you haven’t let it succeed prematurely.”

Gus shows that he is strong and shows that he can make the best of the time that he has left to live. He does not want to become like most people, suffering, laying around, and letting their disease prohibit the activities they could be participating in. After Augustus asks Hazel if she has become her disease, she realizes that she has let her disease control her. After Hazel comes to this realization, she begins to get out of the house more and enjoy life. Coping with death is a very touchy and sensitive subject among teenagers. Death is very hard to cope with for anyone, no matter how old. Everyone deals with death in some point in their lives. With the coming of death, comes the realization that in everybody’s life, there will be that one grenade. Poor Augustus had already had one grenade blow up. His ex-girlfriend, Caroline, died of cancer in her brain, and he was hurt beyond repair. Gus stayed with Caroline until the very end and he had wanted to be able to support Hazel when she was in need. Gus learned to take his suffering and turn it into something positive. Gus learned how to take death and turn it into inspiration.

For me, I would never be able to have a positive outlook on death. Death is the hardest thing to cope with. Losing somebody you care about is the hardest thing I have ever had to go through. Hazel feels the same way. Losing Gus turns her into a mess and I believe when Gus passed away, her condition started to deteriorate. Hazel did not have her sunshine anymore. Gus gave her hope and when they were together, infinite happiness. Gus realizes that he is going to die soon and organizes a pre-funeral so he can hear Isaac and Hazel’s eulogies’ for him. Both Isaac and Hazel are very upset while they are reading their eulogies.

Hazel pours her heart out and describes her love for Gus and how unique he is and how wonderful and how much of an honor it was to love him. When Gus dies, at his funeral, Hazel tailors her eulogy because Gus is no longer suffering and can hear nothing she says. What she said to him was for him and only him to hear. Hazel did not want to make Augustus’s parents suffer any more than they already were. Death, although inevitable, has a positive impact on some aspects of life. Many people realize things about themselves they never would have if the one they loved never passed away. Death is a good thing; it keeps equilibrium in the human mind and physically on Earth.

Love is ultimately complicated by illness and death. To be in love is every teenage girls dream. To be in love with a guy like Augustus Waters, any girl would kill for. While reading the novel I fell in love with Gus because of how sweet and charming he was. Gus’s personality was so similar to a guy that I fell for. I could relate to Hazel. While I was reading, sometimes I felt like I was narrating my own story. Hazel fell in love with him because he was sweet, charming, funny, and he understood her. John Green creates the perfect characters for teenagers to relate to on the topic of love. Augustus will do anything to get Hazel’s attention and he will do anything to make her happy. Augustus shows his love for Hazel in many ways. For example, Hazel shares her favorite book with him called An Imperial Affliction and Gus went through the trouble of reading it and finding the deranged author of the book so Hazel could have all of her unanswered questions answered. Gus uses his wish in order to fly Hazel and him to Amsterdam to meet the author of the novel. While they are in Amsterdam, Hazel and Augustus fall deeper in love.

Gus is hiding something crucial in their relationship from Hazel. Gus had just gotten more X-rays done before the Amsterdam trip and the results showed that his cancer had come back. His cancer spread all throughout his body and there was absolutely no possible way to cure it or prolong his life. Hazel thought she was going to die far before Gus would. This news took her by surprise and made her realize she would be in existence without the love of her life fairly soon. This news made Hazel’s love for Gus grow even more because now the time spent together between the two of them was cut short. Teenage love is a confusing subject. So many mixed emotions are associated with loving somebody. In this novel, death is associated with love, unfortunately. In the end, Augustus Waters and Hazel Grace had a love that was “bigger than other infinities” (259). Hazel loved Gus until the end of her “infinity.” Some loves are better than others and their love was like no other.

Hazel and Gus had a bond that nobody would understand; just as it should be, only the two lovers understanding each other, completely. In Chapter twenty, Hazel is reading Gus his eulogy she wrote for only his ears. Hazel says, “But, Gus, my love, I cannot tell you how thankful I am for our little infinity. I wouldn’t trade it for the world. You gave me a forever within the numbered days, and I’m grateful.” Hazel begins to cry after reading Gus’s eulogy. Love is a confusing subject. Illness and death are inevitable and more difficult to cope with when losing a loved one, as Hazel discovers. The title of the novel comes from a quote from Shakespeare in Act 1, scene two, Cassius says, “The fault, dear Brutus, is not in our stars, But in ourselves, that we are underlings;“ meaning that it is not fate that will doom somebody.

The person has doomed themselves. John Green does not agree. In his novel, he shows that it is not the person’s fault sometimes. All bad things cannot be avoided. Some fates are easier to avoid than others, but death, is not one of those. Death is inevitable. Hazel and Augustus never did anything wrong to deserve the fate they got handed to them. They could not avoid it or change it. Gus and Hazel found a way to love still, despite their faults. Death and life itself could not change the way Gus and Hazel felt about each other. Neither death nor illness could ever take away the joy Hazel and Gus felt from being in each other’s presence. 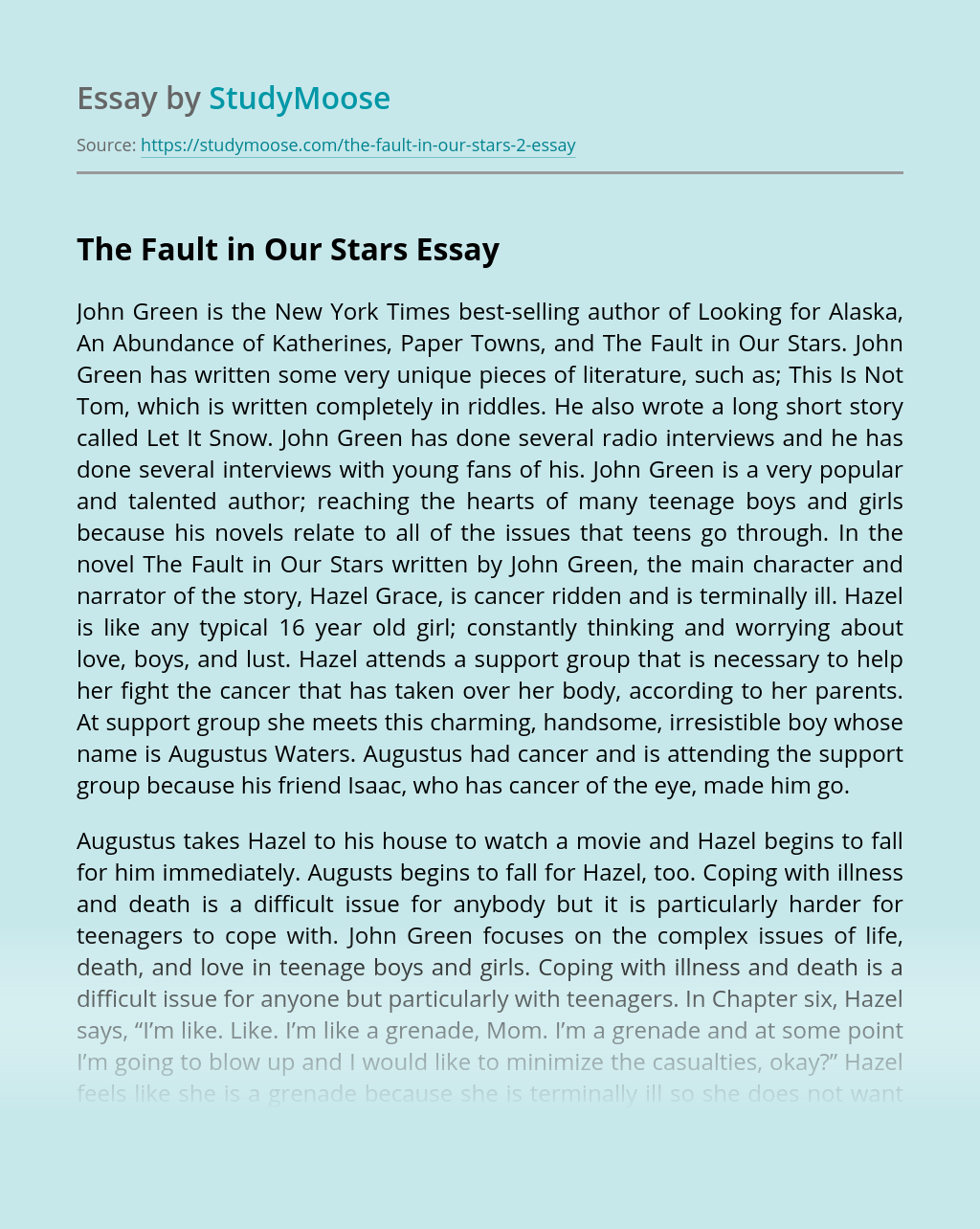 Don’t waste time
Get a verified writer to help you with The Fault in Our Stars
Hire verified writer
$35.80 for a 2-page paper
Stay Safe, Stay Original