Critical Review - "The Fault in our Stars" by John Green

The Fault in our Stars is a young adult novel written by John Green. It is based on the remission of a 16-year-old Thyroid cancer patient, Hazel Grace who relentlessly struggles to breathe. She attends a Cancer Kid Support Group where she meets Augustus Waters, a 17-year-old guy diagnosed with osteosarcoma. They form a close relationship and constantly share their love for a book called “An Imperial Affliction” written by Peter Van Houten who resigned from writing it halfway. Upon the desperation in finding out the ending, the two protagonists set off to Netherlands to meet the author.

Don't use plagiarized sources. Get your custom essay on
“ Critical Review – “The Fault in our Stars” by John Green ”
Get custom paper
NEW! smart matching with writer

Their journey together reveals the themes of love, grief, loss, and both physical and mental pain. Throughout the book, there are reoccurring metaphors of water and stars; water representing death and stars signifying hope, hence the name ‘The Fault in our Stars’. Each of these themes along with the repeated motifs the author creates, reaches out to the reader and causes them to be drawn into the lives of the characters and their relation to each other.

The two protagonists dread each day with the constant worry that they’d pass away any minute. Augustus and Hazel’s love for each other triumphs over struggle and hardship but “… yet still [they] worried… Worry is yet another side effect of dying.” The times when they are not contemplating what it means to be gone, they’re drawn into ‘An Imperial Affliction’ (AIA). John Green purposely made the characters metaphorically relatable to those in AIA so there is a meaning to the existence of the book.

The two sweethearts chase their dreams all the way to Netherlands in order to meet up with Peter Van Houten, a “…rude, abrasive, and utterly drunk” father of a departed cancer kid. Hazel and Gus both reminded him of her, and the “circumstances that made him so cruel” and caused pain in his life. John Green intended on Peter Van Houten’s charisma to be the way he wrote it as he himself also “intellectualize[s] emotionally painful experiences so that [he doesn’t] have to confront/process them emotionally.” Both authors are somewhat related with their thoughts and feelings.

The Fault in our Stars introduced many deeper topics on various themes relevant to today’s society. John Green “wanted to be ambiguous”; therefore he was able to accurately depict the characters in their current age, with their strong personalities, which were present through the whole novel. There are no negative aspects of the text, as every part was crucial in showing different emotions, and character traits. Hazel Grace had a strong personality, a complex train of thoughts, and thyroid cancer, as it’s “fairly similar to what [Green’s] close friend, Esther had”. The novel was mostly influenced by Esther, who died of thyroid cancer in August 2010, and “after she died, [Green] had to write [his] way through it, desperately looking for some hope in it.” The setting is also inspired by her; the problematic occurrences that cancer plays in the character’s lives.

The many times throughout the novel where every character experiences love, grief, loss and pain causes you to “laugh… cry, and then come back for more” – Markus Zusak. John Green does this by presenting many heart wrenching events, where physical pain is shown. The pain of Hazel suffering from breathing everyday, but the unconditional love between Hazel and Augustus over power all the sadness. He also explores motifs of stars and water, very deeply. He has metaphorical words for the stars and water. Stars representing wishes and water, representing the proximity of death, which is frequently talked about throughout the book as Hazel “…devotes quite a bit of [her] abundant free time to thinking about death.”

Another heart throbbing novel, Looking for Alaska also by John Green is similar in a way where there are two protagonists who frequently engage in conversations, drawing them closer to each other, and allowing them to explore the different themes of love, loss and friendship.

In summary, the author has successfully written a gripping novel. John Green presented situations relatable to the current teen culture by speaking in the mind of a teenager. I therefore applaud to his ability to write with every word sticking to the specific character trait each of them are supposed to portray. He has engaged the readers in every page, entitling it to being an award-winning novel.

Critical Review - "The Fault in our Stars" by John Green. (2016, Mar 29). Retrieved from https://studymoose.com/critical-review-the-fault-in-our-stars-by-john-green-essay 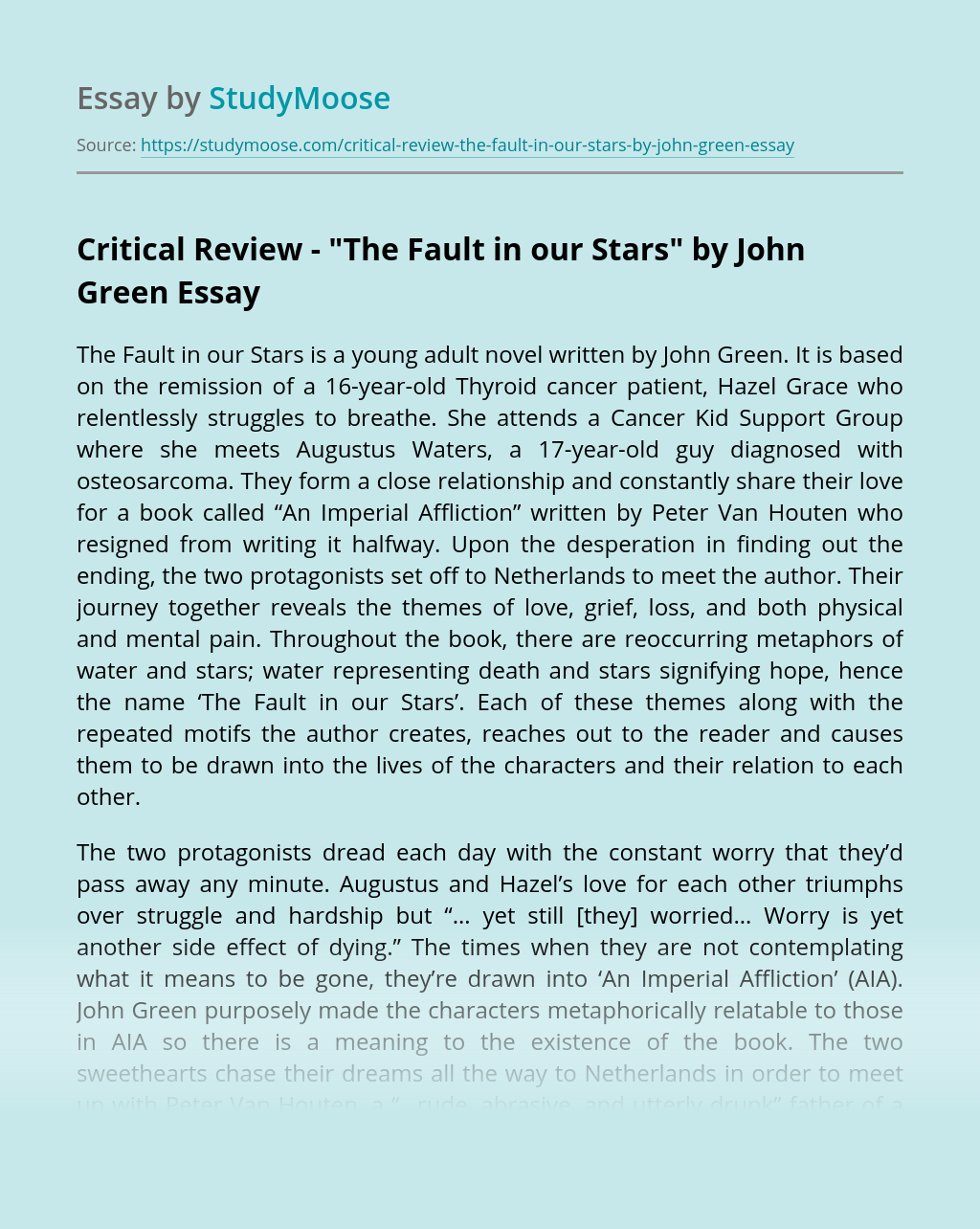