In the 1960 film “Little Shop of Horrors”, the main character, Seymour acquires a strange plant, which, we find out later, talks, lives off blood and eats people. The main idea of this film is when you try to please everyone without regard to yourself you end up loosing yourself. The other characters in the story revolve around Seymour and this bizarre plant. He names the plant after his crush Audrey, who is an assistant in the flower shop where he works.

Don't use plagiarized sources.
Get Your Custom Essay on Themes in “Little Shop of Horrors” Just from $13,9/Page

The owner of the shop, Mr. Mushnick, is a greedy man with a Russian accent, who comes to see the plant as a way of making money. Another main character is Seymour’s mother, who is an eccentric hypochondriac who tries to keep Seymour with her, to “take care of her”. Seymour tries to please the people around him, even though most of the time he ends up bumbling any task he is given. He has a good and innocent heart and genuinely cares for people.

The plant represents both Seymour’s mother and Mr. Mushnick, also all of the other people in the world who take advantage of Seymour and other innocents like him. The plant lives off of blood and bodies, and it only opens and feeds at night. This is a vampiric reference, however it is not only sucking the blood and eating from others, it is also figuratively sucking the life out of Seymour, making him do these things to keep the plant alive. The plant forces Seymour to feed it more and more people to keep it alive, Seymour does this because he thinks the plant will make all his dreams come true. He wants to keep Mr. Mushnick happy so he can keep his job, and he wants to be able to make money to take care of his mother. He also sees how much Audrey likes the plant, so he wants to keep it around to please “his girl”.

This film is much like the short film “Amelia”, in that Seymour’s relationship with his mother is similar to the relationship Amelia has with her mother. Though in the movie, we never see Amelia’s mother, we can tell a lot about their relationship from the one-sided conversation they have on the telephone. Amelia’s mother seems to be a very controlling person, using guilt to sway Amelia to her side. Seymour’s mother is the same way, using her “illnesses” to keep Seymour around. Being a hypochondriac, she thinks she is sick or even dying all of the time, when in fact she is perfectly healthy.

In some ways the plant is also like Seymour’s mother, or at least like his relationship with his mother. This is akin to how the Zuni fetish doll represents Amelia’s mother and her relationship with her. Where the doll keeps relentlessly attacking Amelia, gnashing its teeth, it is like her mother constantly nagging her and not letting her alone. The plant in “Little Shop of Horrors” cannot move around (thank God), but sits there nagging Seymour to feed it more and more. This is like how his mother is always asking Seymour to get her medical supplies or medicines to take. His mother is using him to, in effect “keep her alive”, even though she is well. The plant is doing the same thing. It uses and even forces Seymour to bring it more food to sustain itself.

“Little Shop of Horrors” is also similar to the short and silent film “Two Men and a Wardrobe”. The main idea of that film was that if you have high ideals in a corrupt society you would be alienated for it. The two men walk around with a very large wardrobe between them, which symbolizes their high ideals, morality, dreams and the like. Wherever they go, they are kept at a distance from other people, pushed away and even beaten up for their ideals.

If we think about the evil plant in “Little Shop of Horrors” the same way as we do about the wardrobe, it would seem that Seymour is like the two men. Seymour places all of his high hopes and dreams with the plant, wanting it to grow and live and make everything better, but as it turns out, it is the one thing that makes his life worse in that society. Of course the wardrobe in the other film doesn’t eat people, but it does set them apart from everyone else around them, making the different and keeping them isolated.

“American Werewolf in London” is also a comparable to “Little Shop of Horrors” in that it is a story about a journey from innocence. In the first film, David finds out who he really is by the symbolism of turning into a werewolf, or what he refers to as a monster. He and his friend start out in the movie as carefree average teenagers on a trip overseas. A werewolf attacks David and his friend Jack, Jack is killed while David runs away, leaving him. As the movie progresses, David has to deal with the reality that he is a coward who left his friend to die. His turning into the werewolf metaphorically shows this visually.

Seymour in “Little Shop of Horrors” also begins the film as an innocent youth; you can first hear him in the back of the flower shop singing very gaily. His life seems very carefree for the time, he has a job and lives with his mother and he gets to spend time with the girl he loves. When he brings the plant into the shop, things start to go down hill. He finds out that in order to keep his job, he has to keep the plant alive, and to do that he has to kill. Seymour is at first very upset after his first kill, but as the killings continue, he becomes more and more deliberate. Seymour has to deal with his new reality of being a killer, just like David has to deal with being a monster.

Another similarity between these two characters is how they deal with finding out who they really are. Both try to ignore and run away from their new problems. David uses television and books, but Seymour uses simple denial. Both also use romance as a way of escaping. David falls in love with Nurse Price, and Seymour admits his love for Audrey. However, both of their problems come back to bite them. Nothing they can do can make the issue go away, so eventually they have to face it. In the end, Seymour tries to kill the plant, but is eaten himself, being consumed by his problem. David is killed in his werewolf form, sacrificing himself so he wouldn’t kill any more people, especially his love.

Michael Jackson’s “Thriller” music video depicts young love in two situations, both turning out to be something other than they appeared. When they young men turn into their respective creatures, it shows the viewers that no one really knows another person entirely; they can be someone, or something, completely different. This is like “Little Shop of Horrors” because of the relationship between Audrey and Seymour. Seymour is trying to be the romantic, wooing his girl, while at the same time killing people to keep his evil plant alive and growing, even though it is growing out of control.

Dysfunctional families are perfectly depicted in the movie “Burnt Offerings”. When the mother becomes obsessed with a massive house and material things, her family suffers, they become isolated from each other and eventually she becomes one with the house, or in other words, consumed by it all, and her husband and son die for it. It is a story about materialism, greed and relationships. This is very similar to “Little Shop of Horrors” in that Seymour seems to come from a dysfunctional family himself, his mother being a hypochondriac and no father to speak of. His employer is greedy and only wants him around for his plant that brings in visitors to his shop. Seymour himself has great ideas and wants to achieve his dreams and will do anything to gain them, even kill it would seem. If you want something so much you will do anything for it, you will end up loosing yourself and even the ones you care for.

Themes in "Little Shop of Horrors". (2016, Jul 21). Retrieved from https://studymoose.com/themes-in-little-shop-of-horrors-essay 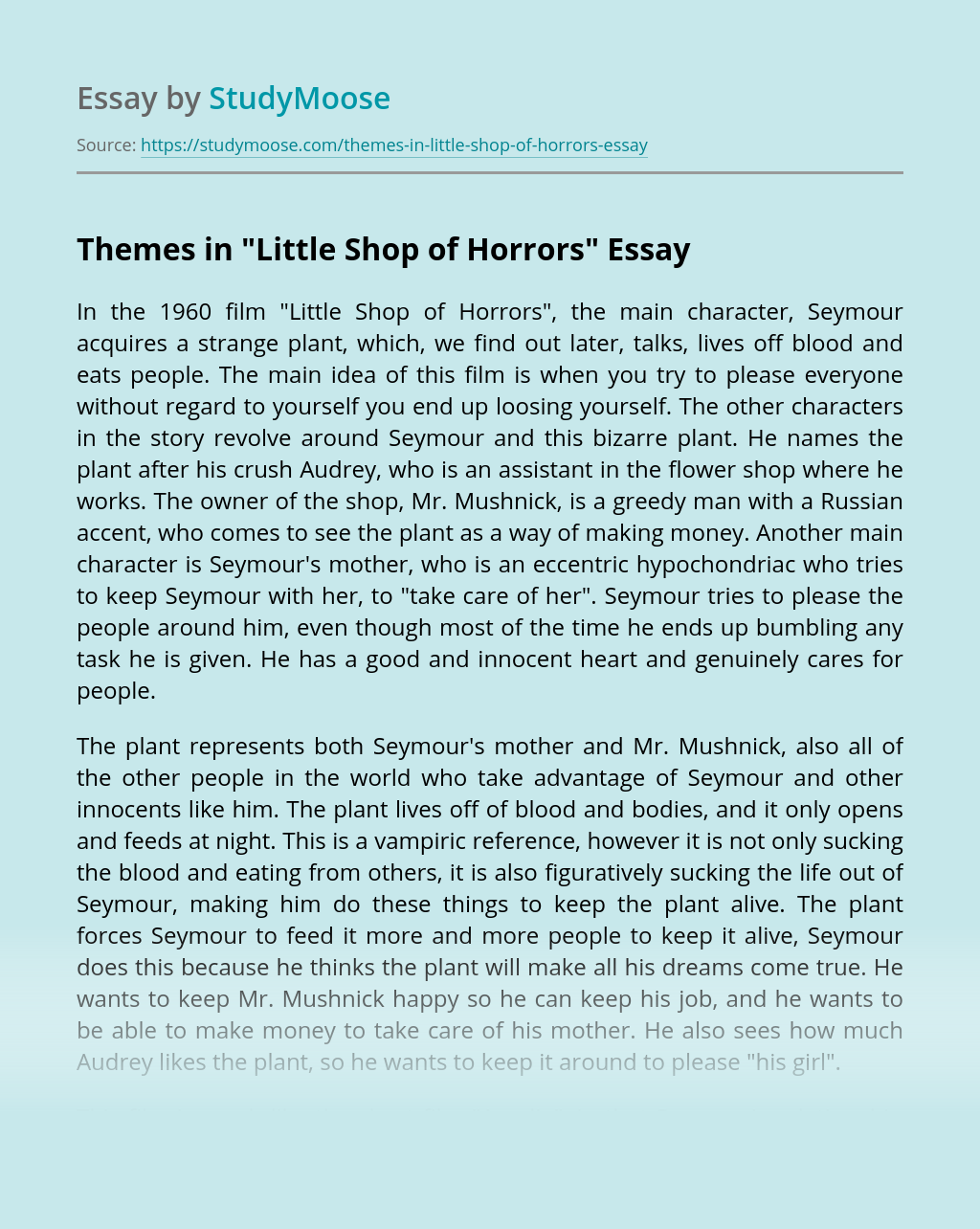 Mississippi Burning directed by Alan Parker is a film set in the mid 1960’s. It was set in the time of the Civil Rights Movement and throughout the film it is shown how badly coloured people were discriminated against during those times. The major theme in the film is racism and segregation between the white... VIEW ESSAY

Prompt 3 “Read carefully paragrphs 11-13 of Orwells Shooting An Elephant. THen write a well-organized essay explaining how the author uses stylistic devices and rhetoical strategies to convey his attitude toward the shooting of the elephant. Elephants were once, and are currently, considered prized possessions in some parts of the world. The taming of these... VIEW ESSAY

I watched the film; And Your Name is Jonah. My initial reaction to this movie in the beginning was frustration. This boy was clearly not meant to be in a mental hospital for the mentally challenged. He had the full capabilities of a normal child and it was not so hard to see. I don’t... VIEW ESSAY

View sample
Pros And Cons Of Being Famous

Almost everyone of us, at least once, woolgather a life of being rich and famous. But analogous many other things, as we are witnessing on nigh daily basis, that class of life brings both lordly and detrimental sides. Having gold and being famous certainly contributes to plenty who film that in many different situations, making... VIEW ESSAY

The movie Finding Neverland is about the writer J. M. Barrie and his journey of writing plays about imagination and happiness. Barrie has a close relationship with Sylvia Llewelyn Davies, and her sons, who give Barrie the idea of the well-known play Peter Pan. J. M. Barrie attends the reception of his latest play, ‘Little... VIEW ESSAY