Hamlet represents many things: tragic hero, over-thinking educated man, and poor friend. He is also a revolutionary, a philosopher, and a dreamer, and reconciling these good qualities with the bad proves as maddening for the audience as it does to Hamlet himself. However, what is often lost in the shuffle of Christian theologies in the play is the fact that nihilism as a persistent force, guiding Hamlet’s actions (or inaction, as the case may be) and serving as the catalyst for tragedy.

Turn in your highest-quality paper
Get a qualified writer to help you with
“ Hamlet Analysis: Characters, Themes, Main Conflicts ”
Get high-quality paper
NEW! AI matching with writer

Nihilism serves in the play as a kind of spiritual nether region into which men like Hamlet can find themselves being pulled into. It represents something that, to Hamlet and those like him, comes across as something off a salvation: it represents an opportunity to free one’s self from the need to act, and instead welcomes someone to become completely absorbed in the world of contemplation. This seems ideal for Hamlet the student, but when he is asked to take action by his spectral father, he is torn between his true nature and that which others expect of him.

Unable to believe in himself, Hamlet becomes unable to believe in anything at all, which forms the crux of the play’s tragic moral dilemma. Whether Hamlet was intended to be a nihilist or the work nihilistic in nature is a question ripe for debate. According to Donald Wehrs, Placing the threat of nihilism at the heart of tragedy, Shakespeare seems to anticipate, if not inaugurate, Romantic and Modernist vocations for literature—offering literature as the site where significance after the debunking of myth and metaphysics may be reclaimed (68).

According to such a reading, one of the purposes in the narrative of Hamlet is the debunking of mythology. This would reconcile some of the odder features of the play—for instance, the very non-Catholic ghost of King Hamlet (himself seemingly a remnant from the notions of purgatory) juxtaposed with very Catholic concerns of whether Claudius will ascend to heaven or descend to hell based on the exact moment that he is killed: he can’t be killed, according to Hamlet, when he is “fit and season’d for his passage.

However, Wehrs points out that nihilism is the threat, and not the goal: Hamlet’s tale is not nihilistic simply for the sake of riveting storytelling, but because it reveals that when lives unravel (as they do in all tragedies), a belief in nothingness effectively leaves nothing behind; no substance lurking behind the shroud of life. Why, then, the debunking? Why bother lampooning the absurdity of certain metaphysical notions/superstitions while still adhering to the Christian belief structure?

The answer is as simple as it is striking: through the story of Hamlet, Shakespeare attempts to create a system of morality that is independent of religion of spiritual affiliation. After all, Hamlet is shown as someone torn between moralities, weighing the social responsibility of honoring his father’s request for revenge with the spiritual responsibility of avoiding bloodshed and murder.

He is a man torn apart by his multitude of beliefs, not his lack of beliefs…the famous “to be or not to be” speech represents a descent into nihilism, but it is an abyss that he was driven into by trying to follow the often-arbitrary dictates of what is right and what is wrong. It is no coincidence that the best intentions of Hamlet consign many more souls to death than the deliberate machinations of Claudius. According Tzachi Zamir, some of Shakespeare’s tragic characters (such as Macbeth) are able to resolve nihilistic navel-gazing by virtue of action.

Hamlet, on the other hand, is “more interested in escaping” (537) the physicality of the world: his philosophical nature lends itself more readily to the nihilism that he stumbles into. This is found in the “to be or not to be” speech, as Hamlet notes “With this regard their currents turn awry / And lose the name of action. ” It is interesting to note that the nihilistic Hamlet causes more death and destruction than other tragic characters who have a spiritual belief structure in place: Claudius, as written above, is a cold-blooded murderer, but also a repentant man who does not let his life be consumed by forces beyond his control.

Macbeth readily admits that the violent murder that begins his own tragic downfall will send him to hell, but he cannot help himself. In this spectrum of morality, Shakespeare seems to be implying that good actions can be tainted (following Aristotle’s Poetics, his tragedies almost always feature glorious characters being brought low) and bad actions can be redeemed (the counterpoint of Shakespeare’s tragedies are, of course, the comedies, in which everyone is a case of mistaken identity or two away from true love and happy marriage).

Hamlet seems to perceive this on some level: ““I must be cruel, only to be kind. ” The worst sin, then, becomes inaction: Hamlet’s inaction is a result of his inability to believe in anything, and it seems to clog up the very gears of Hamlet’s world: it is unsurprising, then, that the entirety of that world grinds to a halt from this disruption. Worse still, he tethers the inaction to his ability to reason, when in truth, it is only reasoning that can save one from nihilism.

As Grace Matthews points out, “Hamlet, a religious young man, vacillates between faith and atheism, he becomes vulnerable to the deception that evil offers us… it is only by resisting succumbing to nihilism through thinking that we can protect our spirituality and live meaningfully as a result. ” Hamlet’s sin is not thinking; Hamlet’s sin is overthinking. Perhaps the most strident voice in declaring that Hamlet is a nihilist play is that of Harold Bloom.

According to him, “Shakespeare invented what Nietzsche, and Dostoevsky, and others afterwards started to call nihilism. It’s a pure Shakespearean invention. ” He links this rather explicitly with the character of Hamlet himself: “I’m not sure that until you have the representation you call Hamlet, that you have anywhere…someone who changes every time he or she speaks, and who does it by this weird thing of overhearing oneself, which I can’t find before Shakespeare.”

For Bloom, the notion of Hamlet being nihilistic lies in his personal inability to create an identity for himself: his mind is tugged by reason in one direction, by honor in another direction, and by loyalty in yet another direction. As cliche as it may sound, Hamlet is unable to believe in anything else because he is unable to believe in himself. Aside from the obviously bloody consequences, how does this further the notion that Shakespeare intended this to be a negative thing—a nihilism to be avoided at all costs, instead of an existential safety blanket for individuals to hide themselves in?

The answer to this is the fact that Hamlet is portrayed as less than a person throughout the entirety of the play. In point of fact, his spectral father actually displays much more personality and substance than his son does. Hamlet’s identity is in reflection: he can be a jocular young man with Rosencrantz and Guildenstern, an educated conspirator with Horatio and an angered son with his mother. Without them, though, Hamlet is unable to be anyone at all.

Shakespeare’s Hamlet as a play, and his Hamlet as a character, will remain the center of debate for centuries more to come. However, it is important that the discussions of fate and philosophy—the very kind that Hamlet would have delighted in at Wittenberg—do not overshadow the small things that comprise his tragedy. Shakespeare dangles both Lutheran and Catholic theology in front of both Hamlet and the viewer, but does not advocate one over the other. Rather, both serve as a warning for the only real spiritual evil: the inaction of nihilism.

Ironically, it is only through the use of reasoning that one can overcome the temptation of nihilism…the temptation of surrendering all responsibility and simply succumbing to the ebb and flow of the tides of the world. However, through Hamlet we see that an overabundance of reasoning can actually cause this effect: if one overlaps spirituality and secular education, then everything is thrown into disarray, and the moral compass is not simply broken…one’s entire sense of a true moral north is thrown right out of the window. In its place is a path that can lead only to heartbreak, bloodshed, and chaos. 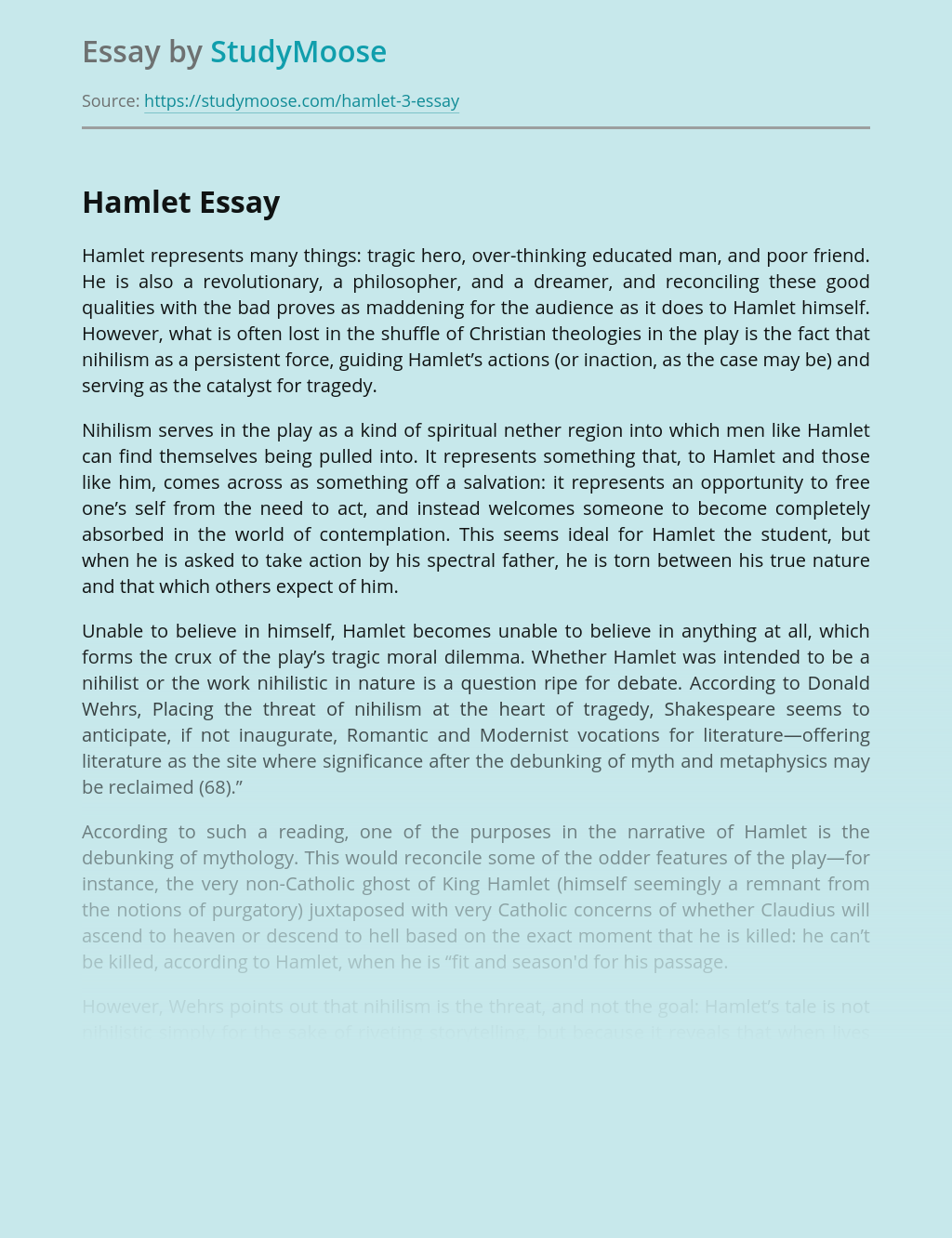 Turn in your highest-quality paper
Get a qualified writer to help you with
“ Hamlet Analysis: Characters, Themes, Main Conflicts ”
Get high-quality paper
Helping students since 2015
Stay Safe, Stay Original