Synthesis of Truman Show and Plato's Allegory of the Cave

Critical Analysis of “The Truman Show” and Plato’s “Allegory of the Cave” When “The Truman Show” was released in 1998, it was just another popular Hollywood flick, but its story is closely related to Plato’s “Allegory of the Cave. ” The plot line for the movie follows this classic tale in many ways, some more obvious then others. As with most cinematic treachery, the movie’s similarities are no coincidence. The writers drew from Plato’s classic because it is such a universal story and is something that everyone can relate to in some way.

Don't use plagiarized sources. Get your custom essay on
“ Synthesis of Truman Show and Plato’s Allegory of the Cave ”
Get custom paper
NEW! smart matching with writer

When the film was released, the general viewing public didn’t attend the theater with the intent to analyze and critique the film in relation to an ancient, revered, and highly intellectual tale. Rather, they attended in order to gain a laugh or two from Jim Carey’s psychotic antics; but, many of the ancient and universal thoughts and ideals can be skimmed from this Hollywood piece.

In Plato’s “Allegory of the Cave,” the ideas that present themselves in “The Truman show” are described in detail.

The idea that we are all interpreting a shadow as reality, and that when we see reality for the first time we don’t believe it to be true. And the fact that after we have seen reality, the shadows, that we used to believe in, don’t satisfy us anymore. In Plato’s story there are men who are chained to a cave wall with not the slightest ability to look but straight forward at a wall of stone.

There is no light, except for the grimy shadows on the wall from the manipulative “puppeteers” that control the shadows and cause them to dance and perform, all of which is perceived by the prisoners as reality.

“… their legs and necks chained so that they cannot move, and can only see before them…. ” (Jacobus 446) Because these captive men have never known anything but the sight of these shadows on the wall, they perceive this as reality. If they were to perceive the real world, they would at first be utterly confused and wouldn’t accept it, they would revert back to their known universe of shadow. But, if they were subjected to reality for long enough they would start to question their current situation and their idea of reality would change.

And after this epiphany they would never accept their previous reality ever again. They would risk everything to experience their new found world of truth. The movie begins with Jim Carey happily involved in his normal daily activities. But unknown to him he is really the star of “The Truman Show” that has him under constant surveillance and broadcasts his life to viewers around the world. Every aspect of his world is formulated in a manufactured set and his entire life, including all his relationships are artificial.

As in “Allegory of the Cave,” he is so accustomed to his life that he doesn’t question for a second that there could be a bigger world outside of his island town. He has always been there, and knows nothing more; just as the prisoners chained to the wall perceive their reality as normal and don’t question the fact that they are seeing shadows and perceiving them as reality. He is perfectly contented with his life and doesn’t see anything wrong with his present situation. When he interacts with his world, he acts like any normal person would, but he is essentially interacting with a wall of shadows.

He receives reactions but these are only be the shadows of the puppeteer and aren’t truly genuine. Every aspect of his life is controlled, but he isn’t aware of it so therefore his is continent to live in a fake world. It is only when he starts to observe some queer happenings that he suspects something is wrong. As in Plato’s story, he feels completely contented until he starts to see a few aspect of the real world. This is when he begins to feel that there is more to reality than what he sees.

When he sees his father as a bum on the side of the road, and when trying to confront him his father is forced onto a bus and taken away. He sees an elevator that leads to a room of people, but is quickly escorted away by armed guards. He begins to think he is involved in some sort of conspiracy, but he doesn’t yet quite understand of what magnitude. As in “Allegory of the Cave,” even when he sees reality, he doesn’t see it as reality, but because his fake reality is so ingrained, he tries to relate these new found phenomena as anomalies in his reality.

“When he approaches the light his eyes will be dazzled, and he will not be able to see anything at all of what are now called realities” (Jacobus 447). His reality is all he believes in so any anomaly to it aren’t perceived as the real reality even though they are. This proves that our reality is only the comfort and familiar things that we have experienced and therefore, each individual’s reality is somewhat different because some traits that are familiar to one individual’s reality, are completely abnormal and unrealistic in another’s.

As with how the character’s in Plato’s story who had seen the light and perceived reality couldn’t relate to the people who were still in the cave. In the end Truman (Jim Carey) begins to realize his folly and realizes that his world isn’t as whole as he had once thought. A dedicated cast member who meets with Truman in order to warn him of his cage appears completely insane but is the spark that is needed to start Truman’s ascent into reality. As in “Allegory of The Cave” he begins to abandon his world and reaches out into another.

But in doing so he becomes discontented with his current situation because he accepts that there is a better world that his is isolated form. He now wants nothing more than to ascend to reality and he is completely dissatisfied with his fake world. He is willing to sacrifice his entire life, which is quite good, for something that he knows nothing about. All he knows is that he is living a lie and there is reality out there that he isolated form. His quest for truth is all that matters now. He, like the character’s in Plato’s story, is stuck in a cave, forced to perceive shadows.

The irony is that these shadows once completely satisfied him but now that he knows there is something more he is completely discontented. Now he needs something that he never needed before, as much as he needs air to breathe, his awareness has caused him much anguish and pain. He makes many futile attempts to escape but they are all foiled by the master plan of the director. He is under constant surveillance and is required to convene an elaborate plan but he prevails and reaches the end of his universe.

Just as he is about to leave the director speaks to him, telling him that even though his world isn’t reality it is better than the outside and he will be more contented if he stays than if he leaves. Truman understands this possibility but the quest for truth and true reality is enough for him to risk a harder life. “The Truman Show” speaks to us in a more understandable context that “Allegory of The Cave” but they both contain similar meaning. Our reality is only what we have perceived and what we believe to be true. It is only until we see concrete proof of another reality that we begin to question our present one.

And even then, because our sense of reality is so utterly complete, our minds are quick to judge new information that contradicts our reality. But, once we have had a taste of reality there is no way that we can be comfortable going back to our old situation. It is human nature, if we are aware of freedom, we will risk everything to obtain it, even if it means compromising our comfort, security and life. Works Cited Jacobus, Lee A. , ed. A World of Ideas: Essential Readings for College Writers. Boston: Bedford/St. Martins, 2006. Plato. “Allegory of The Cave. ” Jacobus. 443-453.

Synthesis of Truman Show and Plato's Allegory of the Cave. (2016, Dec 03). Retrieved from https://studymoose.com/synthesis-of-truman-show-and-platos-allegory-of-the-cave-essay 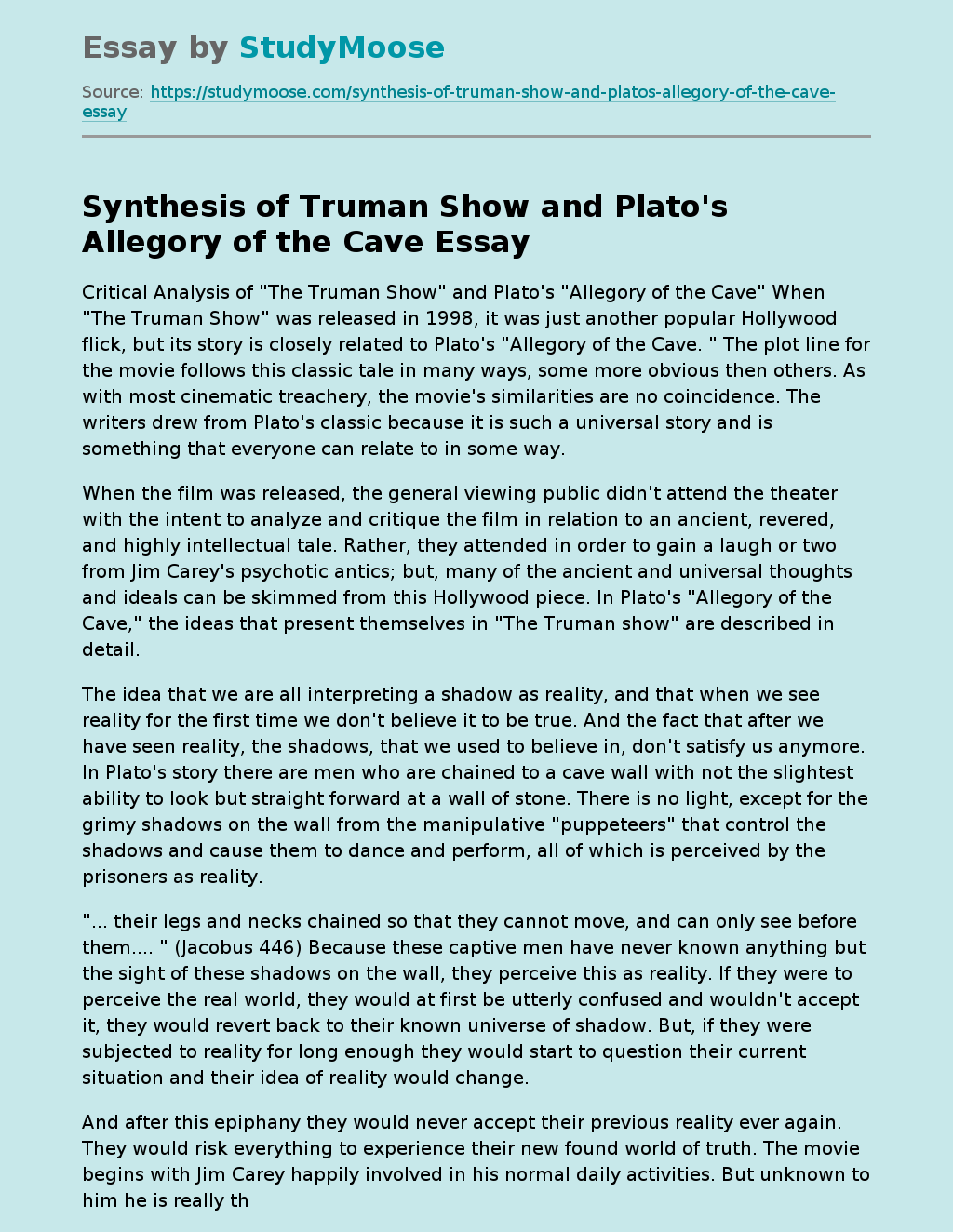