Most people remember and liked the movie, “The Titanic”. Perhaps this was because the movie was based on a real story. And, of course, it was a movie that contained drama; action, adventure and we cannot forget the romance.

Titanic, had been branded as the ship of dreams and was also known as being “Unsinkable”. The ship was beyond doubt considered to be unsinkable by all passengers aboard on its grave departure to Cherbourg, France and then to Queenstown, Ireland to pick up additional passengers on April 10th, 1912.

Don't use plagiarized sources. Get your custom essay on
“ “The Titanic” Critical Review ”
Get custom paper
NEW! smart matching with writer

During this epic journey a poor thriving artist named Jack Dawson (Leonardo DiCaprio) and a 17 year old rich girl named Rose DeWitt Bukator (Kate Winslet) fall in love, until one tragic night, their enchanted love for one another turned into a desperate struggle for survival on a ship that was about to plummet to the bottom of the North Atlantic Ocean.

During the film Rose had found several different ways to escape away from her former fiancée Caledon Hockley to be with Jack, but when the Titanic suddenly collides with the gigantic iceberg on April 14th, 1912, and then swiftly sank on April 15th, 1912 at 2:20 in the morning, Jack died and Rose survived along with about 700 other members that were aboard the ship.

Then Rose came back 84 years later to recapture the story about her life aboard the Titanic by telling the delightful tale to her granddaughter and friends explaining to them how it was the first sight of Jack that helped her fall hopelessly in love and she then continued to discuss with them her fight for survival.

With knowing that the Titanic was the largest and most luxurious moving object ever built by the hand of man, the writer and director James Cameron tried to recapture the true life of this fabulous ship. The Titanic included various amenities that many of its passengers had never enjoyed in their own homes, such as electric lighting and heat in every room. The size and magnificence of the Titanic swiftly acknowledged this ship as being a legend, even before anyone had been on the ship. Of course it would have been quite difficult for James Cameron to rebuild the actual Titanic so he had a replica built of this amazing beauty just shy of 775-foot. It was truly inspiring to watch the passengers board the ship, being able to see a piece of history come back to life.

Cameron accurately used his ingenious technological experiences towards this film by the structure of the magnificent rooms, the glorious ballrooms and chandeliers, and the unmistakable differences between the many classes of society aboard the ship really showed that he knew what he was doing when creating this film. From the explicit details of the ship to the smallest trinket seen it was truly a delight since I do not get to see such astounding gems very often. Cameron had made sure that this film was very defined and detailed you could see every pore on DiCaprio’s face, every rivet of the ship, and every droplet of sea spray.

Not to mention that the sinking of the ship was every bit as spectacular as it would have been to see it on the giant theater screen. (Armstrong, 2007)Cameron’s cast selection was a great choice by placing the young DiCaprio with the new talents of Winslet was truly captivating. Though this was the breakthrough for Winslet she was a bit rough-edged for some of the scenes, making the 1920’s figure of a women look a bit uncontrollable. Then with Leonardo DiCaprio this too was one of his biggest eye openers to the public, but to me he has performed better in different roles since his role in the Titanic.

The soundtrack that was chosen for this film was a true and amazing piece of work. This soundtrack truly highlighted and enhanced every portion of this film. Cameron could not have picked a better group of musical talent to put into his film, with Céline Dion, Michael Smith and many more artists. The soundtrack CD for Titanic was the biggest selling primarily orchestral film score in history.(Wikipedia)The Titanic has become a classic movie mainly for its focus on the historic disaster and this tragedy as being a classic tale and now it has become one of modern day folktales, but like many folktales it has been somewhat clouded by the way the distaster has been recounted over the years.

This movie will always be remembered not only for its memories of this tragedy but for the being known as the one of the Best Films Ever. Titanic eventually won 87 awards and had additional 47 nominations from various award giving bodies all around the world. I would recommend this movie to everyone and hope it gets passed through the next generations to come. 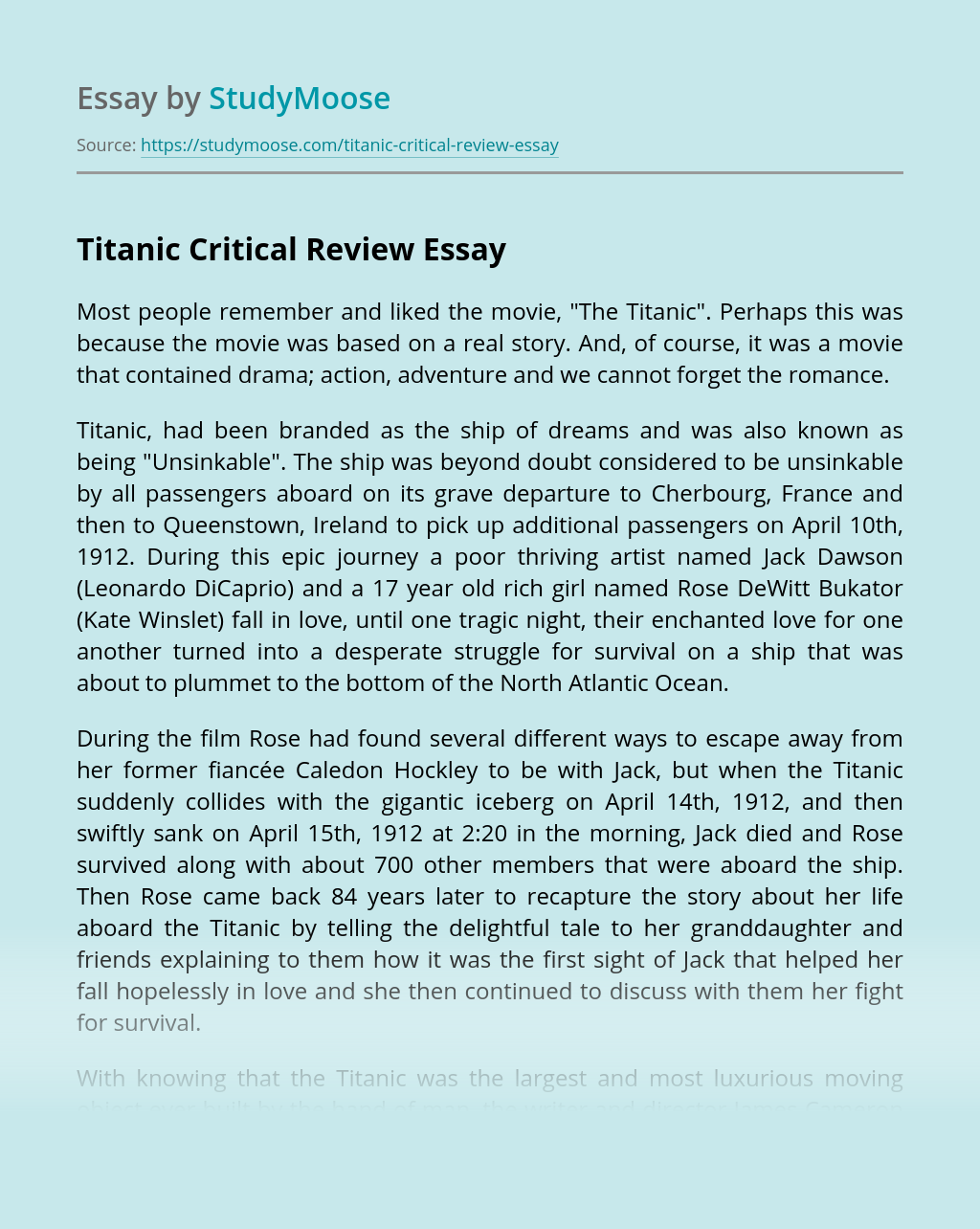