Utilitarianism Look at the Titanic
When engineers design a product many things go in to the decision making process when it comes to selecting materials, design, and the manufacturing processes. One concern that has always been in the decision making process is trying to make sure the outcome will always be ethically good, although this isn’t always the case. Try as they might, no person is perfect, and accidents do happen. When engineering disasters happen there are many factors that may be involved, such as human factors, design flaws, extreme conditions, and materials failures.

Don't use plagiarized sources. Get your custom essay on
“ Engineering Ethics of Titanic Sinking ”
Get custom paper
NEW! smart matching with writer

When these things do happen it is important to look at the ethical aspect of each part of the failure and try to analyze if any one person could be put at fault.

One very famous and very disastrous engineering failure was when the “unsinkable Titanic” hit an iceberg and sank. The Titanic was a British ship originally conceived in 1907 to be a mail and passenger line to go from England to New York by the Harland and Wolff Irish Shipbuilding Company and The White Star Line to compete with the Lusitania and Mauritania which were the two biggest and fastest steamships at the time.

When the Titanic was constructed weighed and astounding 46,000 tons, which was one and a half times heavier than the Lusitania and Mauritania. The Titanic was to be far more extravagant than its counterparts. It had luxurious accommodations for its first class passengers including on-board swimming pools, a gymnasium, bathrooms with stained glass windows and comfortable furniture, and even the styles of decor differed from cabin to cabin.

The Titanic also had a great number of less glamorous rooms to accommodate middle class passengers, which is where they planned to make a lot of their profit. Although it was more luxurious, the Titanic was slightly slower than its competitors.

The ship set sail on April 10, 1912 for its maiden voyage. It stopped at Cherbourg, France and Queenstown, Ireland to let on more passengers and mail before setting off for its final destination around dusk of April 11. The next afternoon, reports of an ice in steamship lanes were heard over the radio, but this was not unordinary for the time of year. As time went on more detailed warnings were being received and it became apparent that an ice field lay in the path of the Titanic. The ship tried to divert its path twice to miss the ice field, but on the night of April 14, lookouts spotted and iceberg in the immediate path of the Titanic. The ship tried to reverse directions when the warning came but it was too late. The Titanic struck an iceberg estimated to be six times more massive than it. This caused the hull, which had become less ductile due to the freezing water temperatures, to buckle allowing vast amounts of water to fill the ship. The Titanic was constructed with 16 watertight compartments, and four would be able to flood without incident, but this collision caused six of the compartments to flood. In less than three hours the massive shia form of ethics in which the aim of action should be to create the largest possible p carrying more than 2,200 people sank in below zero water. Only 705 passengers and crew survived and were picked up by the liner Carpathia the next morning.

To fully understand this disaster and its possible causes and alternate outcomes it is important to look at the possible causes individually as well as a whole. It is also important to look at them from many different ethical perspectives, although, for this look at the sinking of the Titanic I have chosen to focus on a utilitarianism standard. Utilitarianism is a type of ethics popularized by Jeremy Bentham and John Stuart Mills in which the aim of action should be to create the largest possible balance of pleasure over pain or the greatest happiness for the greatest number of people. In other words, each decision should be made to result in the most happiness for the most people. This makes it a form of consequentialism, where the consequences of one’s conduct are the ultimate basis for any judgment about the rightness of that conduct. Jeremy Bentham created an algorithm to determine the degree or amount of pleasure that a specific action is likely to cause. He called this Hedonic Calculus and it was divided into seven different categories. Bentham based this calculation off of intensity, or the strength of the pleasure, duration or how long the pleasure will last, certainty or how likely it is pleasure will occur, propinquity or how soon
the pleasure will occur, fecundity or the likeliness it will be followed by pleasures, purity or probability that feelings of the opposite will occur, and extent or how many people will be affected. I will try to put some of the major failures of the Titanic in to these categories to determine the ethical standing of the engineers responsible for the Titanic.

When analyzing this disaster the first thing to consider is the engineer’s design of the Titanic. The Titanic was employing many new and innovative designs that were believed to make the Titanic the safest ship ever built at that time. The engineer’s of the vessel made claims that the Titanic was “unsinkable” and that “even in the worst possible accident at sea, the ship should have stayed afloat for two to three days.” One of the features that lead them to this claim was the 16 watertight compartments in the hull of the ship. The way they were designed allowed for up to four compartments to be breached and they ship would still carry on. This feature of the ship would be a good act when looking at it from a utilitarianism view because in all categories of the hedonic calculus it seems like it will cause the most pleasure for the most number of people. Although the idea was good, it could be argued the execution was not. The compartments were made watertight by watertight doors that could be dropped manually if flooding occurred. This allowed for the compartments to be watertight horizontally, but the rooms had no ceilings, and the walls only went a few feet above the water line. This meant if a vast amount of water flooded a compartment it could flow over the top of one and spill into another. When applying the calculus to how the compartments were constructed the duration was medium because the walls at least slowed the water down some and hindered the sinking. The certainty and propinquity were good because it allowed for immediate pleasure, conversely the fecundity and extent are poor because the pleasure will be followed by pain when the compartments begin to spill over which would cause for a great number of people to experience pain, with a fewer number experiencing the pleasure.

Another decision that led to the eventual demise of the Titanic was the materials chosen for the very important rivets. The flash of the Titanic also made it quite expensive to construct. To cut some costs the 3 million
rivets used were made of two different materials, one stronger than the other. Steel rivets were only used in the central hull of the ship because this is where the engineers thought that the strongest rivets were needed. Weaker iron rivets were used in the stern and bow of the ship. This low quality metal used on these parts lost their integrity and became brittle in extremely cold waters, like the ones the Titanic would be travelling through. When applying to utilitarianism to this decision it is clear to see that this was a bad action. The duration of the pleasure would only be until something threatened to break the weaker rivets, but this is where you would want pleasure the most. It is unlikely that pleasure would continue throughout the life of the ship or happen suddenly so the certainty and propinquity are also bad. It is not likely that the pleasure of cutting costs would be followed by other pleasures so the fecundity and purity would be low. The extent of this possible pain would be very great while the pleasure of saving money would only help a few which is also very bad in a utilitarian sense.

The last oversight I will look at is the number of life boats on the Titanic. There was a law that required all vessels over 10,000 tons to have at least 16 life boats on deck. These were considered to be unappealing to the eye, so to try and give the greatest pleasure to their passengers the Titanic only had 20. Even though its massive size would have required over four times as many boats. This decision was made because the Titanic was “unsinkable” so the life boats were more on board to help save survivors of other boat crashes. This decision was initially pleasurable, but due to the circumstances turned out to cause great pain. The duration of the pleasure would be great as long as the boats were never needed. The certainty, propinquity, and extent were all high as long as the boat was above water. But if a crash happened all of these along with the purity and fecundity became very low. This action would have to be considered a bad action because when designing a ship you must consider the worst possible situations.

When looking at all these flaws from a utilitarianism view it is clear that short term pleasure was always chosen over the possibility of long term pain
or pleasure. This resulted in many thing being pleasurable up until the crash, but when designing a product where people lives may be at risk it is important to base your decisions on what would cause the greatest pleasure for the greatest number of people in all possible situations and outcomes. The hubris of the engineers clouded their vision and they failed to do this which resulting in the death of 1500 of the 2200 people on board the Titanic when it sank. 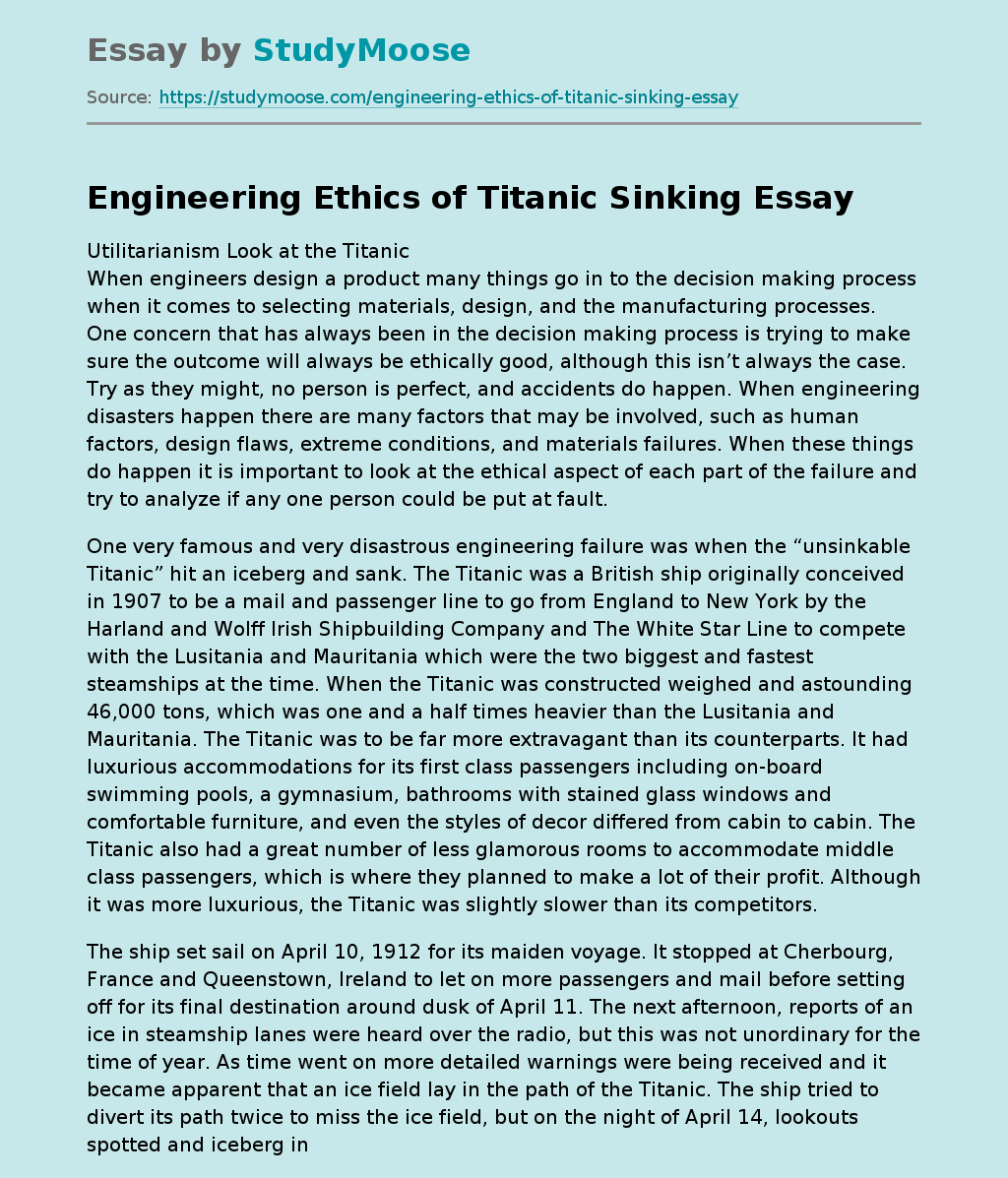