A Poem After the Titanic by Derek Mahon

The poems begins by stating, “They said I got away in a boat.” The use of the impersonal pronoun, “They,” conveys a sense of paranoia, and, “got away,” implies criminal activity. He claims to have, “sat shivering,” and, “turned to ice.” The sibilance in the first statement serves to emphasise how desperately cold it was, and the clichéd ice metaphor that follows is highly ironic considering the fate of the Titanic.

The speaker uses bleak imagery to convey his trauma, such as his use of cacophonous words like, “Pandemonium,” and “Shredded.

” These convey to the reader how chaotic that night on the ship was and how it continues to haunt the speaker even now. When he describes the night he uses alteration twice: “Prams, pianos,” and, “Boilers bursting.” The use of the verb, “bursting,” conveys a violent image and could also serve as a metaphor for how the speaker’s life fell apart after the Titanic and became as useless as a broken boiler.

He uses pathos to incessantly make emotional appeals the reader in an attempt to evoke feelings of sympathy and pity. We see this when he bemoans that his, “Poor soul / Screams out,” and that he, “Sank as far as any / Hero.” By likening himself to a, “Hero,” we realise that he is unrepentant of his actions that night. We get a sense that he is unceasingly haunted by the events of the Titanic and sees remnants of the experience everywhere, such as the, “broken toys and hat-boxes.

” This emphasises the guilt he feels over the fact that women and children died and he survived. He speaks of, “Lost faces I never understood.” There is a constant repetition of, “I”, as if the speaker is attempting to justify himself.

We are given a sense of how pitiful the speaker’s life is when we read that every time there is a storm outside he cowers inside and, “Takes his cocaine and will see no-one.” He has taken to substance abuse to dull the pain of metaphorically drowning over and over again. The poem is an extended metaphor of how the speaker did not drown physically, but instead drowned in depression in the aftermath of the disaster. The tone throughout is dark and self-pitying, which reflects these feelings.

The structure of the poem has a similar effect to the language. The poem frequently uses enjambment, giving the poem a broken and melancholic structure that aptly reflects the content of the poem. There is a regular but not constant meter. The poem has a lack of both stanzas and a rhyme scheme, creating a sense of discord. This could be a metaphor for the Titanic, whose maiden voyage was supposed to be regular and predictable but turned out to be anything but.

To conclude, in the final line of the poem the speaker expresses a wish to be remembered in his sadness and to be included in our lamentations. It could be argued that the poem’s main purpose is to convey to the reader that the survivors of the Titanic are in a worse position than those who died due to the stigmatism and survivor’s guilt that wrecked their lives.

A Poem After the Titanic by Derek Mahon. (2017, Nov 06). Retrieved from https://studymoose.com/a-poem-after-the-titanic-by-derek-mahon-essay 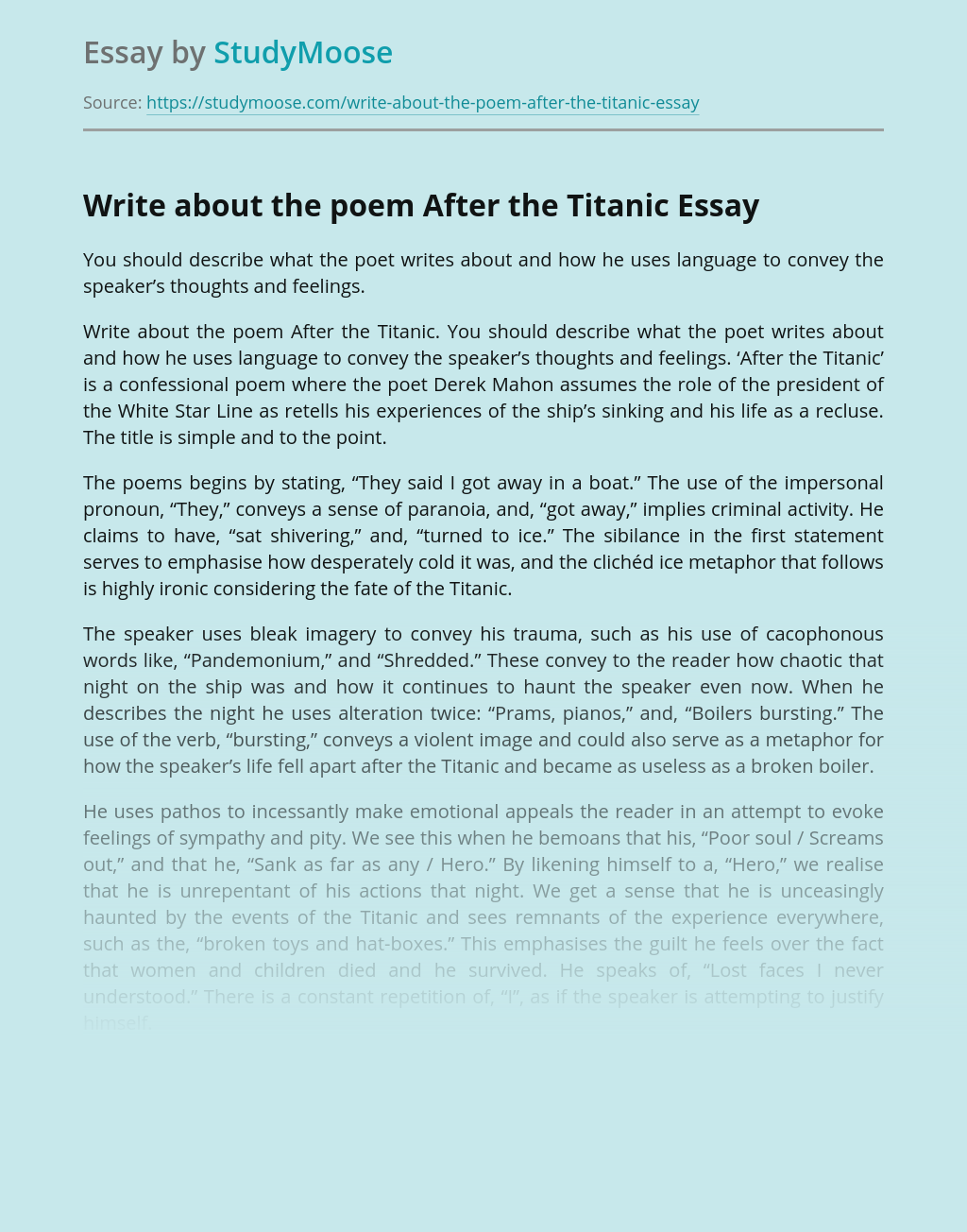 Rate this post Abstract This paper raises important questions concerning the “ethics” of criticism with reference to Wordsworth scholarship. Reviewing the major critical approaches to Wordsworth’s canonical poem “Tintern Abbey,” I explore their implications for doing literary criticism today. I begin with an analysis of the polemics between the New Historicists and their opponents regarding...

Rate this post The first three quatrains or line 1-12 of William Shakespeare’s Poem My Mistress’ Eyes are Nothing Like the Sun can easily be seen as an insulting and negative tone “ If snow be white, why then her breasts are dun” “Than in the breath of my mistress reeks” . But in truth...

Rate this post Robert Frost’s poetry is always simple and direct, yet strangely deep. Everyone can read into his poem but with different kind of expression. Frost has been discovering the world. He likes to explore relationships between individuals and between people and nature. One of his famous poems, ‘Mending Wall’, reveals his feelings and...

A Poem I Wish I Could Remember

Rate this post Christina Rossetii had expressed her regret and longing to recall the “first day, first hour, first moment” of the “unrecorded” first meeting of her youthful love. She consider the first meeting “mean so little” in the old days, she thought it was “dull” to remember the youthful love that she knew would...

The Importance of Determination

Rate this post Everyday people face challenges, but it is important that one does not give up, and to keep trying until they successfully overcome the obstacles that stand in their way. “Mother to Son” by Langston Hughes and “Still I Rise” by Maya Angelou are two different works written by two different authors yet...

Rate this post Throughout this essay I will be looking at how the theme of conflict is presented in the poem ‘Flag’ written by John Agard. ‘Flag’ is a poem that is presented as a conversation between a naive questioner and a responder about the power that a national flag or symbol can have over...

Rate this post Plath’s arrival of the Bee Box is a poem which depicts a box containing bees. In regards to this theme, it is not the only poem that Plath has approached bees as she wrote The Beekeeper’s Daughter. Additionally this poem can also be seen as a classical allusion to Pandora’s box as...

Rate this post The poem ‘Dover Beach’ by Mathew Arnold communicates the disturbing views of the poet that the world is turning its back on religious beliefs. Informed mostly in first person viewpoint, we see a change in the speaker’s perception from seeing the world as soothing and hopeful however his thoughts turn to disgust...