Review “Titanic” is a long, colored romantic drama film. Released in the 1997 in the USA, this highest-grossing film has earned millions of dollars and, which is more valuable, great love of the viewers all over the world.

The movie was written, directed and co-produced by James Cameron. He managed to make a wonderful, exciting and very romantic movie. Its plot is based on a famous story about the liner named Titanic which was wrecked in the ocean after a collision with an iceberg.

For those times, and that was the beginning of the XXth century, Titanic was a great achievement and thousands of people tried all their best to travel on board of this craft. So its wreck was a shocking accident for most of the people.

However, Cameron’s problem was not only to show the great and unforgettable sinking of a huge liner into the black depth of the ocean, but also to include into this story human feelings.

So he has written the scenario of the movie according to all rules of a romantic film.

The main characters are Rose DeWitt Bukater and Jack Dawson who fall in a forbidden love on the board of the Titanic.

Rose’s fiancée Caledon Hockley knew about it and even tried to kill Jack who managed to save himself. The end of this story is rather mournful, because Jack Dawson drowns. The story is narrated by aged Rose to a group of explorers who wanted to know more details about the wreck of the Titanic.

Leonardo Wilhelm DiCaprio (as Jack Dawson) is an Academy Award-nominated American actor well known for his roles in blockbuster movies like “Romeo and Juliet” (1996) and “The Aviator” (2004), and was famed for his global celebrity influence dubbed as “Leomania” in the late 1990s.

Kate Elizabeth Winslet (as Rose DeWitt Bukater) is a BAFTA Award-winning British actress. She is noted for having played a wide range of diverse characters over her career and she is also highly regarded for her first role as Juliet Hulme in “Heavenly Creatures”.

William George Zane, Jr. (as Caledon), better known as Billy Zane, is an American actor and director. He is perhaps best recognized for his role as the Phantom in the eponymous 1996 film based upon the comic book superhero. Up to and including 2006, Zane has appeared in over 50 films and numerous TV-series.

The film about Titanic was splendidly directed. The photography is really excellent. Every shot of the movie can seem to be a separate magnificent picture. The majestic views of the sunset in the sea, the scenes inside the Titanic, in luxurious halls, and of course the great view of a sinking liner – these pictures can’t make you indifferent.

The sound effects of the movie are also very realistic. Besides the speech of main actors we can hear the splash of water, or the music and speech of the passengers in the restaurants. The main theme of this film is the famous touching soundtrack “My Heart Will Go On”, performed by Celine Dion. James Horner wrote this song in secret with Will Jennings because Cameron did not want any songs with singing in the film. Dion agreed to record a demo with the persuasion of her husband Rene Angelil. Horner waited until Cameron was in an appropriate mood before presenting him with the song. After playing it several times, Cameron declared its approval.

Titanic received a great deal of negative advance publicity for its budget overruns and delayed release. When it was released, reviews were favorable. Roger Ebert said: “It is flawlessly crafted, intelligently constructed, strongly acted and spellbinding.” Some reviewers felt that the story and the dialogue were weak while the visuals were spectacular. Jeff Millar of the “Houston Chronicle” wrote, “When the ship does hit the berg, at the one-hour-and-45-minute point, we are immediately compensated for the padding in writer-director James Cameron’s basic narrative a shipboard romance.”James Berardinelli gave the film four stars out of four, placing it second of the year 1997 after “The Sweet Hereafter”.

However, the film also received many negative reviews. Kenneth Turan’s review was particularly scathing. Dismissing the emotive elements, he says: “What really brings on the tears is Cameron’s insistence that writing this kind of movie is within his abilities. Not only isn’t it, it isn’t even close”. Barbara Shulgasser gave Titanic one star out of four, citing a friend as saying “the number of times in this unbelievably badly written script that the two lead characters refer to each other by name was an indication of just how dramatically the script lacked anything more interesting for the actors to say.”Nevertheless, the general impression, this film has made on people is indelible. It’s no doubt, that everybody has already seen this movie, and I hope not once and even not twice. And I think that many people all over the world will agree with me if I say that the “Titanic” film is worth seeing. 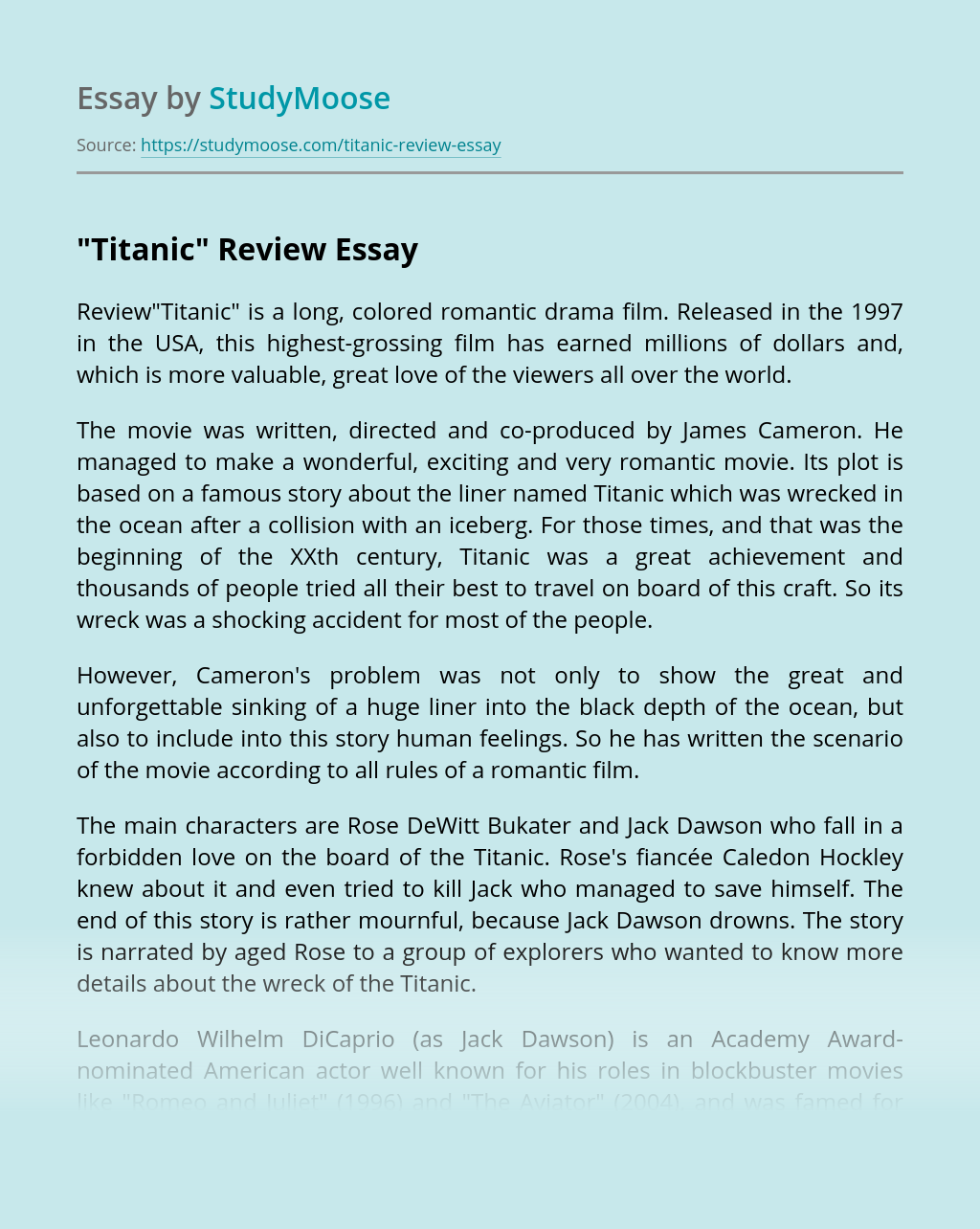