Sonnet 116 was written by William Shakespeare and published in 1609. William Shakespeare was an English writer and poet, and has written a lot of famous plays, amongst them Macbeth and Romeo and Juliet. Shakespeare lived in the Elizabethan era. At that time, the literature and art was in bloom, and his works are clearly characterized by that era both as language and theme goes.

A sonnet is a poem consisting of 14 lines, three quatrains and a couplet, in which the beat follows the iambic pentameter.

Don't use plagiarized sources. Get your custom essay on
“ Shakespeare – Sonnet 116 Analysis and Interpretation ”
Get custom paper
NEW! smart matching with writer

Sonnet 116 is, like the most of Shakespeare’s sonnets, about love. In this sonnet, Shakespeare tries to define love by using comparisons, metaphors and personification. The theme of the sonnet is definitely “true love” because of all his attempts to define it by describing what true love means, and why it is so important to human beings.

The couplet in the end is the conclusion, and is used to sum up and close the sonnet. In Shakespeare’s sonnets, the last two lines are often about Shakespeare himself in some way. Either by sharing his own opinion on the topic he is writing about, or to praise himself as an artist. In the first one and a half line, he says “let me not to the marriage of true minds admit impediments”. That means, that he won’t declare any reasons to why two people with true love towards each other shouldn’t get married.

He continues with: “love is not love which alters when it alteration finds, or bends with the remover to remove”, which can mean that love is not love if it changes or fades away when a better opportunity comes up. He elaborates this in the next quatrain, where he uses a metaphor and compares love to an ever-fixed mark, leading the ships like the North Star. The ships are meant to be the human beings lost in the search for life’s true meaning. The last line of the quatrain says: “whose worth’s unknown, although his height be taken”, which is a clear comparison to love, and how it is measurable, but still more valuable than words can ever explain.

This metaphor makes the message more clear, because you can imagine this star guiding the lost sailors in the middle of the ocean and you understand the meaning of the words in an other way than if he had just written: “love is priceless”. In the third quatrain, he begins with: “Love is not Time’s fool, though rosy lips and cheeks within his bending sickle’s compass come.” First of all, “Love is not time’s fool” is a personification, because “time” is given a human quality by being a fool. The whole sentence means, that time is meaningless to love and that love doesn’t care about aging or death. The next two lines: “Love alters not with his brief hours and weeks, But bears it out even to the edge of doom.” Empathizes the fact that love is a constant concept and goes beyond death. This last quatrain is really powerful and to say that not even death can stop love makes it even stronger. This is actually the whole message in the sonnet, that true love is so strong, not even death can defeat it. With the couplet in the end, he turns the focus on himself by saying: “ If this be error and upon me proved, I never writ, nor no man ever loved.” He kind of says, that if what he has just written is proved wrong, no one has ever loved, and he isn’t a poet. He probably means that he is so certain about this never-ending true love, that he would swear on his most precious ability, namely his skills as a writer. In some way, you can say that he ends up praising himself a little bit in this sonnet too. The same thing happens in the couplet of sonnet 18 “shall I compare thee..” where he ends up proclaiming that his poems makes people immortal. Another thing that sonnet 18 and sonnet 116 has in common is their many comparisons. Although the comparisons in sonnet 18 are a little more obvious in sonnet 116, it is still kind of the same concept, comparing love and beauty to nature. And of course, the theme of love is consistent through so many of his sonnets. The difference between these two sonnets is mostly the fact that sonnet 18 is written to a specific person (at least, we assume that), while the receiver of sonnet 116 can be anyone who is curious to know the definition of true love.

The “love” issue takes up a lot of space in both Shakespeare’s sonnets and plays, and I think that it is the reason that his works never go out of fashion. It is simply a timeless theme, interesting no matter what race, age or gender you are. His works are known around the world, and can be
interpreted so it fits every mind everywhere in the world. With this sonnet, Shakespeare has defined love for the entire human race. 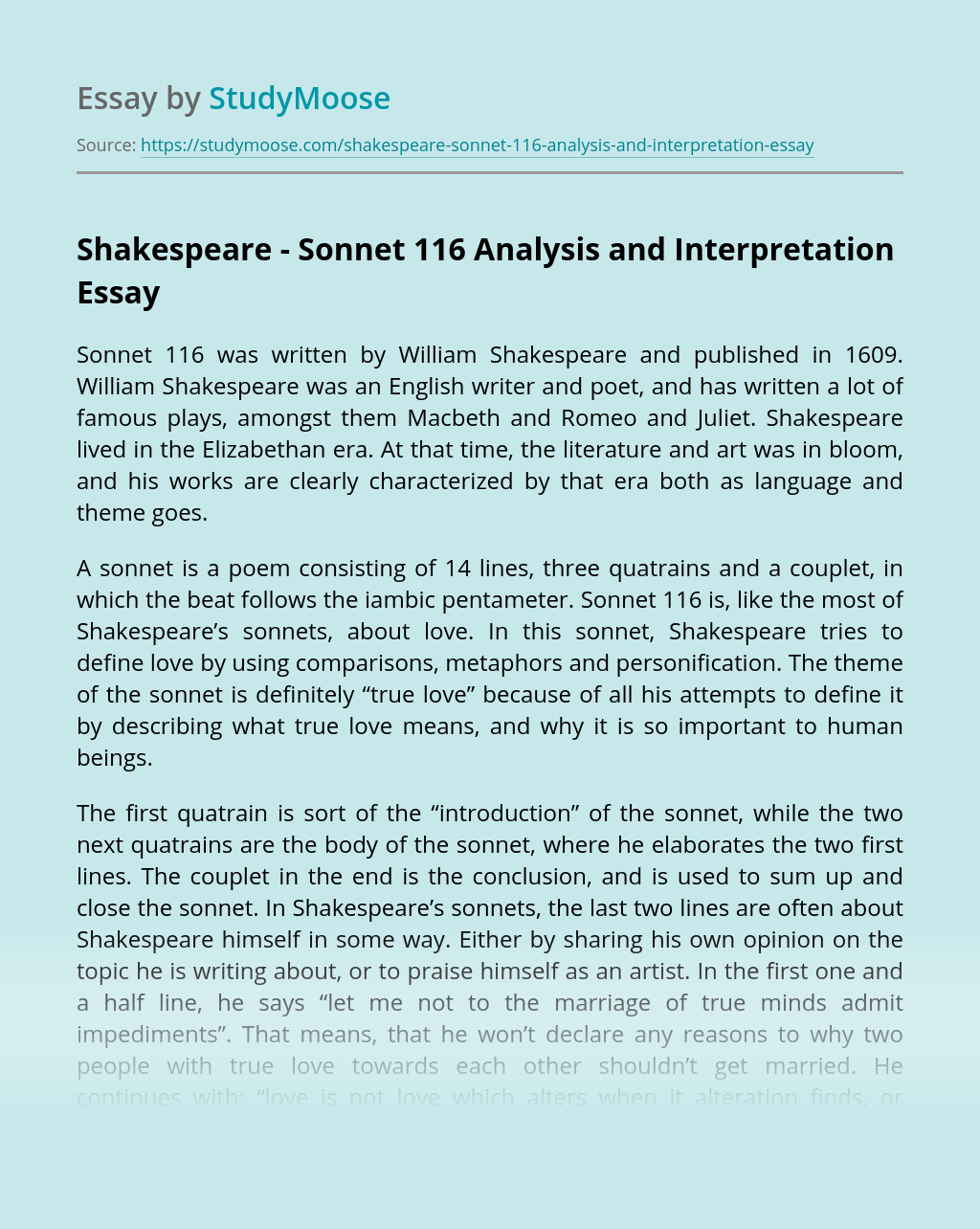