Tsotsi is a exceptional film by director Gavin Hood, the film tells the story of a South African criminal whose life changes after a robbery. A young man that goes by the name “Tsotsi” is a street thug, who he and his small crew commit petty crimes. One night during a robbery, Tsotsi shoots a woman while taking her vehicle, little to his knowledge there is a baby in the back seat. Tsotsi faces a dilemma and he decides take the baby with back to his home.

Don't use plagiarized sources.
Get Your Custom Essay on “Tsotsi” Film by Gavin Hood Just from $13,9/Page

Through out the film you see that the baby changes Tsotsi for better, Tsotsi regains his humanity. Gavin Hood did an amazing job on this film, he used lighting, sound,music, flashbacks, and more to communicate the theme and message of the film. Tsotsi is a cinematic master piece with an ending that will surely leave an imprint on its viewers. Director Gavin Hood uses a lot of literary elements, however the most important is the flashbacks the protagonist experiences.

These flashbacks helps the audience better understand the complex history of the central character. The first flashback occurs when Tsotsi is running through a field terrified and then it cuts to a flashback of Tsotsi as a child running in field also terrified. Another flashback is when Tsotsi and his are talking and it cuts to them as children living together in a tube. Finally, we see what makes Tsotsi the way he is now; in this flashback we see a young Tsotsi holding his sick mothers hand. His drunken father comes in and demands that he gets away from his ill mother. Tsotsi refuses then he get dragged out by his father; while his dog is barking.The father demands the dog to be silent,when the dogs dosent the father crushes his spine. Traumatized, Tsotsi flees from home and starts his new life on his own. These flashbacks shows Tsotsi’s traumatic childhood and why he is a emotionless criminal.

Hood uses very little camera angles in the film, however the ones he uses are effective. Hood uses a lot of close up shot on the actors faces to capture their facial expressions and emotions. One example of this the bar scene, after killing a man on a train during a robbery gone bad; one of the characters “Boston” is in rage. Boston in this scene yells and questions Tsotsi on his motives. The camera focuses on Boston and Tsotsi’s faces, Boston facail expressions show that he is upset and guilty of what had happened, while Tsotsi kept a blank and emotionless face. Tsotsi does not say anything during the sense but his silence says a lot. Loud sounds and music plays a key role in the film. The scene where they plan to rob a man on the train, suspenseful music builds up and sets the tone.

The same music occurs when Boston and Tsotsi are arguing and then leads to Tsotsi attacking him. There is a lot of loud and angry music through out the film, these sounds depict the life style of the township they lived in. The main characters live in township that is stricken with poverty and violence, so violent music syncs with the setting perfectly. After caring for the baby for most of the movie, Tsotsi develops a bond with the baby. At the end of the film Tsotsi decides to give back the child, but you can see the emotion and sadness in his eyes when he gives the child to his parents. Director Gavin Hood used all these literary elements such as flashbacks, camera angles, music,etc to show the meaning of the film which is no matter what people went through in their lives they can a have a second chance a redemption. 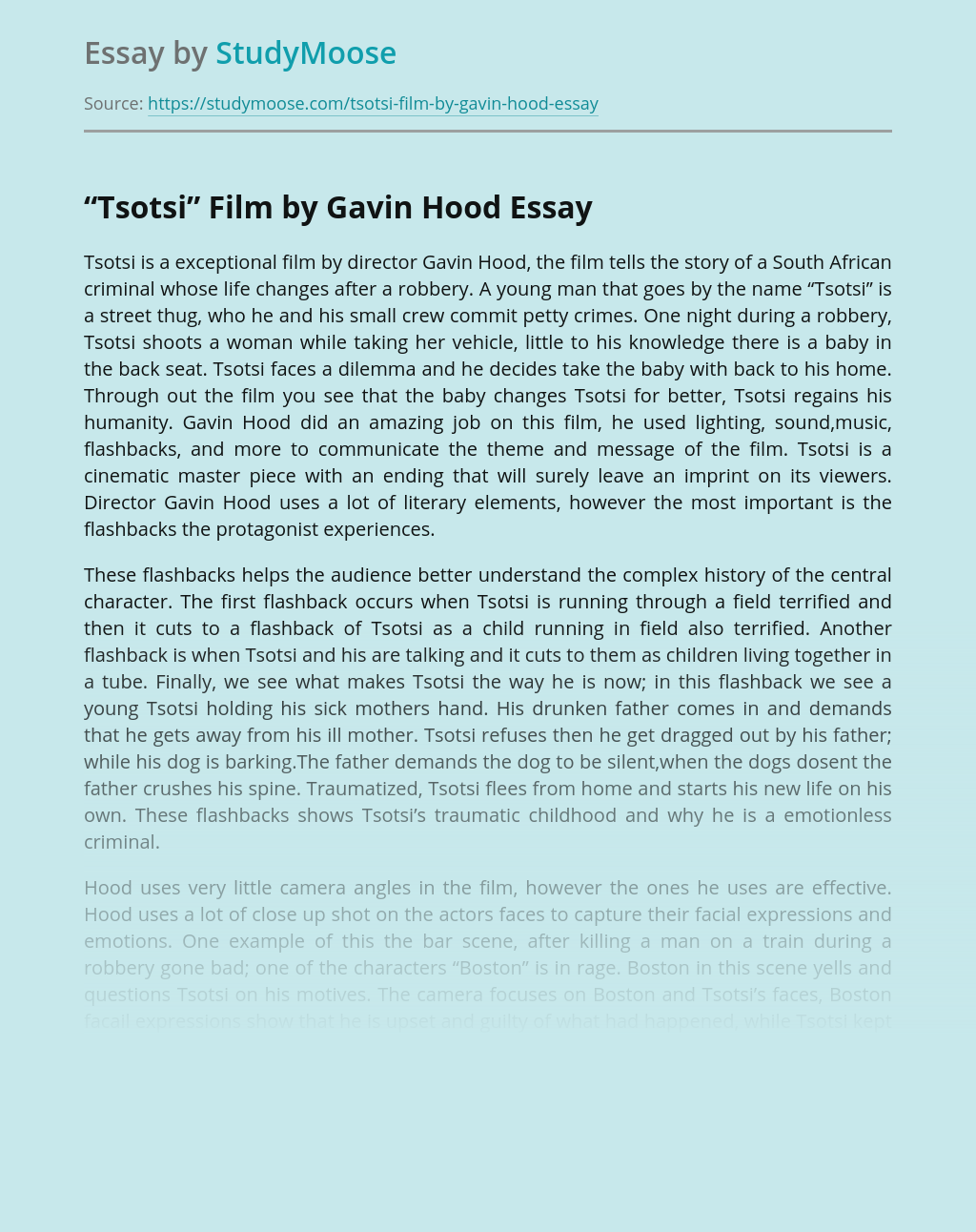 Rate this post This was my second time watching the movie called “The Great debaters,” but it seemed like it was my first time since the emotional scenes and the profound aspect of the movie left me amazed and inspired once more. All the characters in the movie had their own moment to shine which...

A Reflection Paper of Mumbaki film

Rate this post The film Mumbaki is about the conflict of modern and folk beliefs being faced by an Igorot named Joseph (played by Reymart Santiago). He was given the opportunity to study Medicine in Manila. The problem here is caused by the different socialization or culture that occurs in the Philippines. There came the...

Rate this post The passage taken from “The Comfort of Strangers “by Ian McEwan essentially describes the want of two sisters Eva and Maria to look beautiful and furthermore the denial of their parents towards the girls’ desires. It is written in the third person i.e. the omniscient. The passage conveys few symbols: Beauty through...

The Man Who Lived Underground Analysis

Rate this post As the story begins, a unnamed man is hiding from the police. He is tired of running and has decided that he must either find a hiding place or surrender. At that moment he sees a manhole cover in the street. He lifts the cover; the water below is deep and fast....

Rate this post The movie ‘The Hunger Games’ directed by Gary Ross is an extraordinary fictional tale. A tale set in a futuristic dystopia society called ‘Panem’. This nation is divided into 12 districts and a capitol. Every year each district must offer two tributes a male and a female that must fight to the...