‘Finding Nemo’ (2003) was written and directed by Andrew Stanton and Lee Unkrich. This is a computer animated movie that takes you into the breathtaking underwater world of Australia’s: Great Barrier Reef. That is an amazing story between a bond for a parent and child. In the movie the father fish Marlin a clown fish voiced by Albert Brooks loses his wife Coral and 499 of their 500 children to a hungry barracuda fish. Marlin then becomes an over protected father to his one short fin remaining son also a clown fish Nemo that is voiced by Alexander Gould.

Don't use plagiarized sources.
Get Your Custom Essay on “Finding Nemo” Introduction to Film Just from $13,9/Page

However, Nemo gets annoyed by his father’s over protected ways and rebels and swims past the drop-off of the coral reef to touch a boat.

Although Nemo touches the boat Nemo gets swept up by a scuba diver dentist from Sydney Australia on his way back to his father Marlin. In this animated movie the directors then goes to tell an amazing story of adventure, determination and the love of a father while Marlin takes on the big bad sea to find his son all while his son takes on an adventure of his own to find his father.

There is no wonder why this was an Oscar winning movie and even ten years later this is still amazing families everywhere.

As a mother of a five year old ‘Finding Nemo’ came out before my son was born but that has not stopped my son from watching it over and over again. This is one classic movie that Pixar decided to re –release this movie in 3D in 2012 nine years after it was released originally. In Marlin’s adventures to find Nemo he encounters Dory voiced by Ellen DeGeneres which is a regal blue tang fish that suffers from short term memory loss. Marlin and Dory then grow a great friendship as they battle all the unknowns of the barring sea. They friend both scary and nice creatures such as: sharks, whales, jelly fish, sea turtles, pelicans and much more all in their pursuit to find Nemo. All the while Nemo finds himself in a dentist office fish tank. Nemo just as egger to get back to his dad Marlin, Nemo befriends the other fish in the tank to help him try to escape. They come up with different ideas both good and bad to help Nemo try to get to his dad.

After both Marlin and Nemo go through all the trials and tribulations of trying to find one another the movie then ends by Nemo’s last attempt to play dead to be taken out of the fish bowl to be flushed down the toilet which enters a pipe that lands him in the ocean once and for all and where he gets reunited with his dad and new friend Dory. At the end of the movie it shows Nemo’s dad Marlin and Dory dropping Nemo back off to school to go out and learn yet this time both Marlin and Nemo are much more relaxed and ok with Nemo starting school. Where the director then shows that the dad is finally letting Nemo be a kid and give him some independents. He shows that Nemo is finally understands his dad’s worries from the beginning. This movie is a one of a kind and will always be part of my family as well as others. This is the one movie my son always wants to watch when he is sick and makes him feel better and he loves every moment of it. Pixar has stated that all characters are signed up to star in Finding Nemo 2 and will be released in 2016.

‘Finding Nemo’s ‘“director /writer Andrew Stanton’s riveting story, filled with good humor, wrenching emotions, charming characters and a gently place message about the bond between parents and children.” (Salt Lake Tribune). I think the director nailed this one on the nose. This movie to parents is a tear jerker and to a child they see how much parents will go thought to save them from anything good and bad. This movie is such like a cartoon for kids but at the same time this is a computer animated movie that both kids and adults love this movie. The director put just enough adult humor in the movie that kids loves it just as much as the adult.

‘Finding Nemo’ to me as well as many other is such an epic movie to see and feel what each characters feels at that moment. The music and pictures flows with the movie and is just brilliant. The colors of the movie are vibrant and show the breath taking version of the ocean. The characters that are in the movie where once scary such as sharks but the vision of the director shows there is a good and a bad side to these once vicious creatures. As one cite explains ‘Finding Nemo’ is perfect it “will forever be a Disney-Pixar favorite. It’s hard to resist its brilliant storytelling, clever dialogue and unique characters.” (Veneziani).

In conclusion, most people think that “Animated films are often dismissed as children’s entertainment” (Goodkootz & Jacobs). This film once consider great for all ages. ‘Finding Nemo’ once was and still is ten years later a figment in many homes as well as children location such as hospitals, dentist offices and schools. This is a great film for kids to learn the great meaning of parents. People have come up with great line such as Abraham Lincoln with saying “this too shall pass.” However, Dory in the movie said it better with “just keep swimming.” 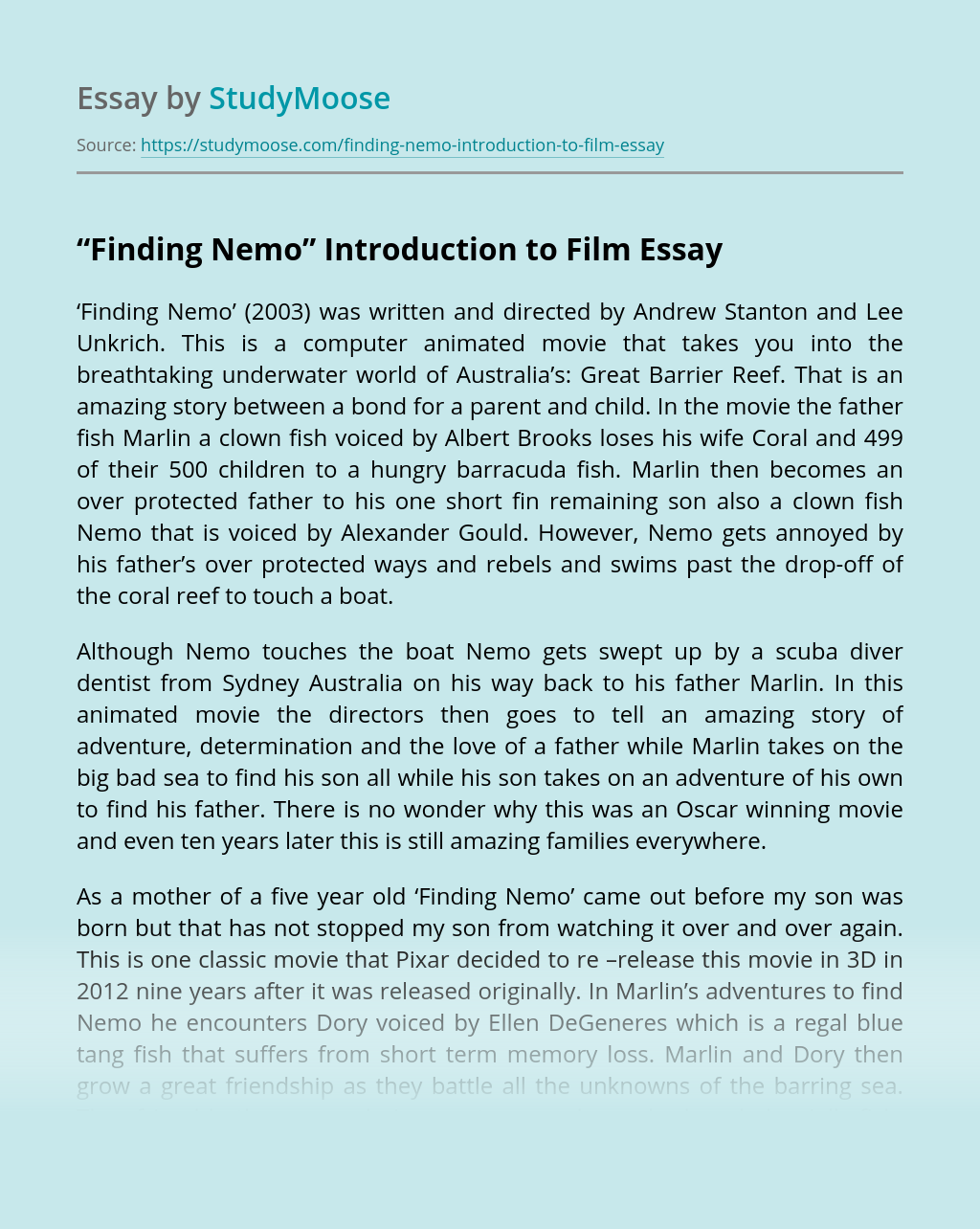 Memento (2001), a film that was written and directed by Christopher Nolan, has captivated the attention of movie and puzzle enthusiasts everywhere. Some may call it a Drama or Mystery, or even a Thriller or a Neo-Noir film, whatever the case is, this film fits most, if not all, of these categories. Memento is a...

Juno The film I have chosen for this paper is the drama-comedy Juno directed by Jason Reirman. It is a domestic comedy with anarchic elements. In the film, you get to follow Juno MacGuff, a 16-years-old girl, as her life changes when she finds out that she is pregnant. It’s a realistic film told from...

View sample
Get Essay
"History vs Hollywood: The Truth Behind Braveheart"

For the a lot of part the History surrounding “Braveheart” is accurate, however there are a number of substantial individuals and events which just do not match up traditionally. After watching the movie and evaluating the history behind it, it ends up being clear that Hollywood felt they needed to change several things in order...

This is a story of Annie Suvillan and her struggles in teaching a blind, deaf and mute girl. At a very young age Helen Keller had experienced an illness that cost her three senses, her sense of sight, hearing and the ability to talk. Since her illness has taken place she hasn’t communicated with her...

View sample
The Film Is Not Yet Rated

At some time in your life, you probably have been prohibited from watching a movie either by a doorman at a movie theater or by your parents, simply because of the rating. I have to say, I never really paid attention to how films were rated, or who was behind the rating process, until viewing...