The film Finding Forrester was an interesting, eye-catching, attention grabbing and exciting movie. The writer Mike Rich did a great job of creating the plot to be funny and fast paced. The director of the film, Gus Van neatly directed the scenes characters to make the film more entertaining. Producers Sean Connery, Laurence Mark, and Rhonda Tollefson had made a great decision on investing what they could into this film which was released on December 19, 2000. Jamal Wallace is an inner city kid who is from Bronx, New York and is an exceptionally good basketball player, and is a genius at writing.

Don't use plagiarized sources.
Get Your Custom Essay on Finding Forrester Film Review Just from $13,9/Page

Always as a C student and not being challenged at his old school because his school sees he is capable of more than what he does, but when he scores highly on his standardized tests, Jamal comes to the attention of the prestigious prep school in New York Manhattan to further his education and play in the school basketball team.

One night, Jamal and his friends decided to break into somebody’s house and steal a letter opener, but a man comes out and frightens Jamal away.

Jamal later returns to the old man’s apartment to apologize and retrieved his backpack. Jamal then returns home to find out that the old man had read and written in his journal entrées. When Jamal again returned to the apartment of the old man, he soon befriends the reclusive writer, William Forrester. The friendship leads to William to overcome his reclusiveness and for Jamal to overcome the racial prejudices and pursue his true dream. Forrester helps Jamal to improve and forward his writing, but Jamal’s English teacher does not believe that Jamal is capable writing so well and assumes that Jamal has been cheating. Enraged, Jamal copies some of what Forrester had once written, but he gets caught for plagiarism. In the end Jamal gets Mr. Forester out of his old apartment into the real world to read something that Jamal had written and also to say that he had given Jamal the right to take his ideas.

There were many themes displayed throughout the film such as friendship, and overcoming, struggles and obstacles and finding real friends along the way. Bothe William Forrester and Jamal Wallace find friendship in an unlikely way because of their passion for reading and writing. Although they are different form each other, they are drawn together by similar interests. In the movie Finding Forrester, William Forrester would not have been able to confront his fears or reconnect with the world if not for his friendship with Jamal. For example, at one scene at the end of the movie, In Forrester’s Will, Jamal is given a package, keys to Forrester’s apartment, and a letter. In the letter, Forrester thanks Jamal for helping him revive his desire to live. Also the package had the manuscript for Forrester’s second novel, called Sunset, for Jamal to complete onward.]

There were many film techniques that the filmmaker had used throughout the movie to explain the theme of friendship and overcoming obstacles and struggles. In addition, the filmmaker used the technique of point of view which is shown in the movie when the camera was trying to make us feel what it was like to see things from the person’s eyes. The setting was in New York City specifically in the Bronx. Shot Aerial was shown when Jamal and his friends were playing basketball; the filmmaker was showing the relationship between Jamal and his friends in the Bronx. A shot, Close-up was shown when Mr. Forrester was looking through the peep hole showing how hard it was for friendship to be form.

Shot, slow motion was shown when Jamal’s basketball team was entering the gym for the game. Shot, tracking was used by the filmmaker when he showed the city at the beginning. Sound, Diegetic was show when the boys were at a party and music was playing in the background. Sound, Nondiegetic was shown when Jamal was talking about the girl who heard sounds. Light, back was shown when Jamal was at Mr. Forrester house and stands next to the window. Light, Source was shown in Mr. Forrester’s house there was a lamp in the background. Motif as shown in the film when Jamal starts using the typewriter that Mr. Forrester was using before and it’s significant because on that typewriter is where Jamal learned how to become a better writer.

The filmmaker was successful in my eye because he truly captured every little moment Jamal and Mr. Forrester had while on their journey to success in finding a friend and overcoming struggles they face. The film was a well-made movie with great actors.

The Film Finding Forrester was a great movie for young adults like to watch because it has a strong theme of how to overcome hurdles and struggles and making new friends along the way. If it was not for William Forrester taking in Jamal Wallace as his protégé, Jamal would not be going to a really great school which challenges him and would not become the amazing writer he has become, most importantly made such a good friend like Mr. Forrester. In the movie the filmmaker incorporated the ten film techniques to show how Mr. Forrester and Jamal worked together to help each other out in overcoming obstacles and struggles. 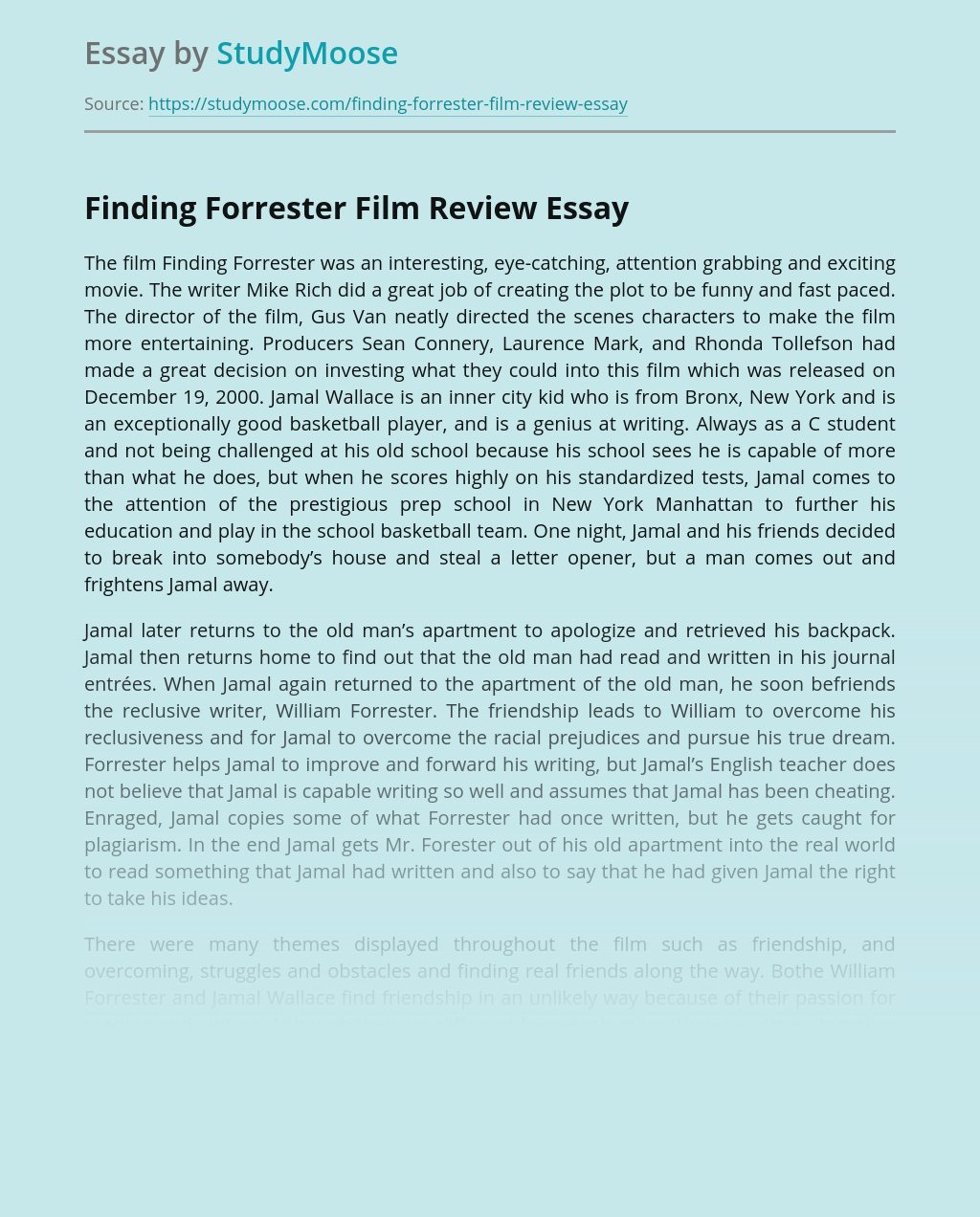 In The Diamond Necklace by Guy de Maupassant, Matilda one of the main characters is very frustrated with how her life is. She was born a very elegant woman but in here day and age women are not recognized on a social scale. Unfortunately she was born into a family of clerks, no way to...

The Devil Wears Prada is a 2006 comedy-drama film, a loose screen adaptation of Weinberger’s 2003novel of the same name. It stars Anne Hathaway as Andrea Sachs, a college graduate who goes to New York City and gets a job as a co-assistant to powerful fashion magazine editor Miranda Priestly, played by Meryl Strep. Emily Blunt and Stanley Tucci co-star, as co-assistant Emily Charlton, and Art Director Nigel, respectively....

Get Essay
﻿The Effects of Horror Movies on Children

The implicit, and often explicit, intention of horror movies is to scare people. The fright engendered by horror movies can have residual psychological effects for years. Two studies, “Tales from the Screen: Enduring Fright Reactions to Scary Media” and another, funded by the National Institute of Mental Health (NIMH), both concluded that exposure horror movies...

In the 2003 film “Gothika” Halle Berry plays a psychiatrist who loses her memory and wakes up in an insane asylum, the same one where she had previously been a staff physician. She is confused, disoriented and has lost time. Pete, a psychiatrist played by Robert Downey Jr. , is the doctor assigned to her...

Reflection of the Film's Every Child Is Special

We all know that there’s a difference between special children and normal children but both have similarities. For instance, they both have talents and perspective towards life. They can play and have fun in their own. Both need attention and discipline from their parents to avoid any misconception while they are growing and guide them...