Racism has raised conflicts in different communities around the world throughout history. Texas is just one of the many places that it occurs. The movie Lonestar portrays this racism in Texas throughout the movie. The movie takes place in present time Texas. The movie is about a 40-year-old murder that is being investigated by Sheriff Sam Deeds. He wants to find out the truth behind the murder. He believes that the murder has to do with two law officials from back in the day, Sheriff Wade and Buddy Deeds, Sam’s father.

Turn in your highest-quality paper
Get a qualified writer to help you with
“ The Movie “Lone Star” ”
Get high-quality paper
NEW! AI matching with writer

Throughout the movie clues fall in place that show the murder was race related. Sam believes that his father, Buddy Deeds, was in fact the murderer, but he finally learns that he is wrong. Sheriff Wade’s own partner, Hollis, kills Wade to stop him from murdering an African American. This movie accurately portrays race relations in Texas during the 20th century. It evaluates how Hispanics and African Americans were subject to hatred, and racism.

Racism is a serious problem that has been around for hundreds of years. It has been in Texas just as long. One reason for this is the fact that Texas and Mexico border each other. This brings many Hispanic immigrants to Texas legally and illegally. As read in the newspaper article, the population from 1970 to 1999 has increased from 11.2 million people to 26.3 million people.(Winslow 55) And also in this article author stated “The Lone Star State also stood out in terms of the size of population growth, with five of the 10 cities and towns that added the most people over the year,” the census bureau said in a statement.

The increase in students causes over crowding of schools and which lowers the amount of education achievable. The increase in population also causes wages and salaries for the labor force to drop drastically. There are so many more people to work now that a job can offer much lower pay and there will still be people who need the money that will take the job. This angers many Texas residents because they feel they are the ones suffering because of the immigrants. This causes somewhat of hatred towards the Hispanic race by many whites. Lonestar depicts this hatred in the movie with a specific scene. A Hispanic man named Eladio Cruz is smuggling illegal immigrants in his watermelon truck. The truck gets a flat tire and Eladio is forced to stop and try replace the tire. While stopped, Sheriff Wade decides to investigate.

He asks Eladio if he is smuggling illegal immigrants and Eladio replies that he is not. He checks the truck quickly and sees nothing. He then asks Eladio if he is carrying a firearm. Eladio goes to his truck to show Wade his shotgun and when he reaches in the truck, Wade shot him in the back of the head. This scenes indeed shows how minorities were treated extremely harshly, even by the law. Hispanics are not the only sufferers in Texas, though. African Americans have to endure violence and hatred, as well. African Americans may have been free by the 20th century, but they were not always treated as if they were. Whites often looked on them has an unequal race. African Americans were often subject to violent crimes. As I read and learned in Horowits e-book, the Ki Klux Klan was responsible for much of the violence on the black community. The KKK discourage blacks from trying to gain more rights in the community.(Horowits 71-72)

This racism towards African Americans is shown in Lonestar,as well. Wade and his partner go into a bar and order a beer. In the bar,Wade encounter a cocky young black man by the name of Otis Payne. Wade orders him to bring his beer,and then forces him to poor it in a glass for him. When Otis is pouring the other beer,Wade intentionally makes him spill it on the table. Otis refuses to clean the mess and smarts off to Wade, who quickly reacts by hitting Otis in the face. Wade then tells Otis that he better remember who he is dealing with and to remember that he is black. This shows how blacks were abused for no reason by many members of the white society. It also shows how they could not stand up for themselves. African Americans were afraid to stand up to the white community because they knew it would bring nothing but more troubles for them.In our days it still happens,Hughes in his article The University of Texas,one of the largest colleges in the USA, is at the center of a series of seemingly racist attacks after black and Asian students were attacked with balloons filled with bleach.

Minorities are not only mistreated by whites, but also occasionally mistreated by members of their own race. In the movie, Mercedes Cruz calls members of her own race “wetbacks” when they are trying to cross over the Mexican American border illegally. She then calls the Border Patrol to deport them back to Mexico. She also talks about how most of the workers in her Mother’s restaurant are illegal and didn’t even have green cards. This shows how minorities often caused problems and spoke out against members of their own race.

The racism in Texas caused much of the people to be very segregated. Races believed that they should not mix in order to strengthen their own race. So everyone pretty much stuck with their own kind. The movie shows how interracial relationships were not allowed to occur during this period of time. Sam Deeds remembers back when he had a crush on a Hispanic girl when he was much younger. Sam’s father forbade him to date the girl because she was Hispanic, and the girl’s mother reacted much in the same way.

The girl also thought it to not only to be wrong, but a sin as well. This scene shows the cultural barriers that existed between the races during this period of time. Racism is a problem that has been around for many years. Although it is not as strong as it was years ago, it still exists and will most likely continue to exist throughout our life-time. Hate and violence has been linked to this racism and segregation has been a result of both. Lonestar effectively portray much of the different forms of racism throughout the movie as well as accurately showing the audience what kind of things the different minority groups had to endure. 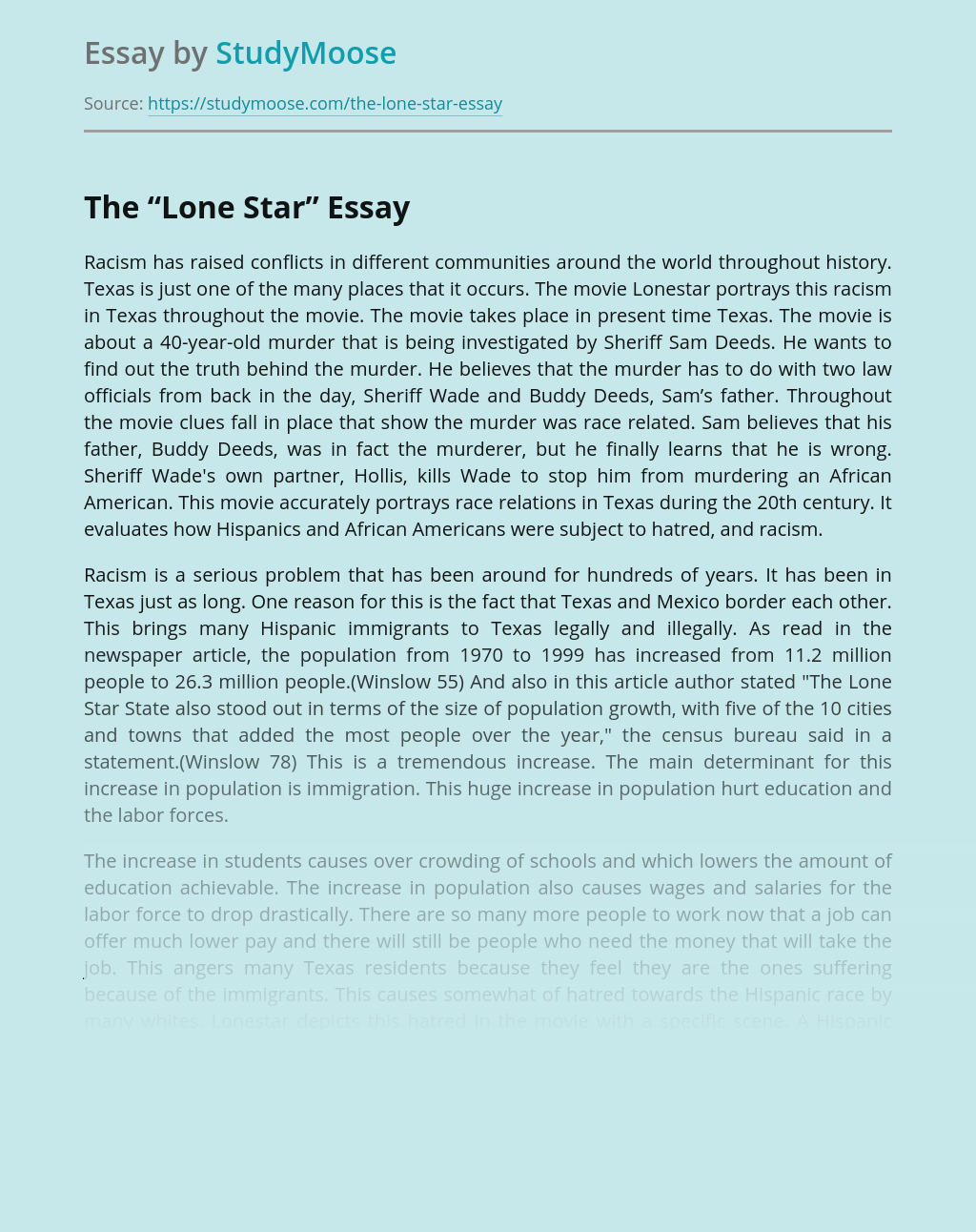 Turn in your highest-quality paper
Get a qualified writer to help you with
“ The Movie “Lone Star” ”
Get high-quality paper
Helping students since 2015
Stay Safe, Stay Original