John Steinbeck was an American author of twenty-seven books, including sixteen novels, six non-fiction books, and numerous short stories. Steinbeck is widely known for the Pulitzer Prize-winning novel The Grapes of Wrath, East of Eden and the novella Of Mice and Men. Born in Salinas, California in 1902, Steinbeck spent most of his life in Monterey County, the setting of much of his fiction such as the novel Cannery Row, a novel depicting the canning Co in Monterey at the time. He attended Stanford University between 1920-1926.

Don't use plagiarized sources. Get your custom essay on
“ Grapes of Wrath: Book and Film Comparison ”
Get custom paper
NEW! smart matching with writer

Steinbeck did not graduate from Stanford, but instead chose to support himself through manual labor while writing. Being part of the labor force during this time greatly influence many of his novels. Steinbeck’s first novel, Cup of Gold, was published in 1929, and was followed by The Pastures of Heaven and, in 1933, To a God Unknown. Steinbeck married Carol Henning in 1930 and lived with her in Pacific Grove, California. He spent much of his time in Monterey.

Steinbeck received the Nobel Prize for literature in 1962, and died in New York City in 1968. The Grapes of Wrath, is written by Steinbeck and published in 1939. Steinbeck does an excellent job in this novel by capturing a significant event in history, the Dust Bowl, which displaced millions of Americans.

The agricultural industry changes and bank foreclosures forced tenant farmers of the land they’ve live on for generations as depicted in the novel with the Joad Family. As the novel opens, Tom has returned home after serving a jail sentence.

The Dust Bowl has decimated the region; foreclosures have forced the farmers off the land. Tom and the a retired preacher Jim Casy decide to accompany Tom’s family to the promise land of California where work is plentiful and wages are high. Things however are not the way they’ve been told. The constant inflow of displace tenant farmers has dramatically increased the demand for work while also deflating wages. Upon arrival, the Joad family are purposefully made to feel unwelcome. Desperate for work, they submit themselves to the abuse from the Californian employers. The Grapes of Wrath exhibits several American themes such as of hard work and self-determination. This realist novel is really the first literature to shed light on life during the Dust Bowl. The book won the National Book Award and Pulitzer Prize for fiction. In 1940, a film adaptation is made. Its directed by John Ford. The screenplay was written by Nunnally Johnson and the executive producer was Darryl F. Zanuck. This film is loosely based on the movie with countless differences, including an entirely different ending.

As the film progresses, it veers further and further away from staying true to the novel. Overall the film brought an interesting interpretation to the novel and even introduced some of its own ideas and themes. The movie won Oscars for best director and best actress (Jane Darwell as Ma Joad) and was nominated for five others, including best actor for Henry Fonda and best picture. The book and film of Grapes of Wrath contrast in numerous ways. Since that book is so long, dozens of scenes have been excluded from the film so that it keeps the audience’s attention. The film excludes all of the inner chapters, short stories that depict what it was like during the great depression. Some inner chapters are merely stories that represent something much bigger. The lack of inner chapters removes Steinbeck’s political references to events occurring during the time. Both book and movie fulfill the title’s symbol. At first the grapes represent promise: the fertile valleys of California, but then, they represent the wrath of the migrants as they realize that they have been lured unjustly to the West. Survival now becomes a challenge. One thing that the film did that the novel didn’t is it used flashbacks as scene in the scene where Muley Graves is explaining to Tommy and the Reverend how him and his family helplessly watch their house destroyed by a tractor.

This is displayed in an obvious manner when looking at the John Ford’s movie made for the classic book The Grapes of Wrath, written by John Steinbeck. Although both texts follow a similar story line, a stronger rhetorical message is delivered to the audience in the book compared to the movie. Both the book and the movie portray parallel themes, however, specific illustrations in the book both strengthen and sensitize the meaning derived from the text, making it easier for the audience to fully grasp the emotion of the story. These specific illustrations found in the book include the diction used in dialogue, the apparent division between the rich and the poor, the importance of unification as a family, and the benefits of being resilient. While these ideas are touched upon in the movie, they are included in a more passive fashion, taking away from the dominance of the message. 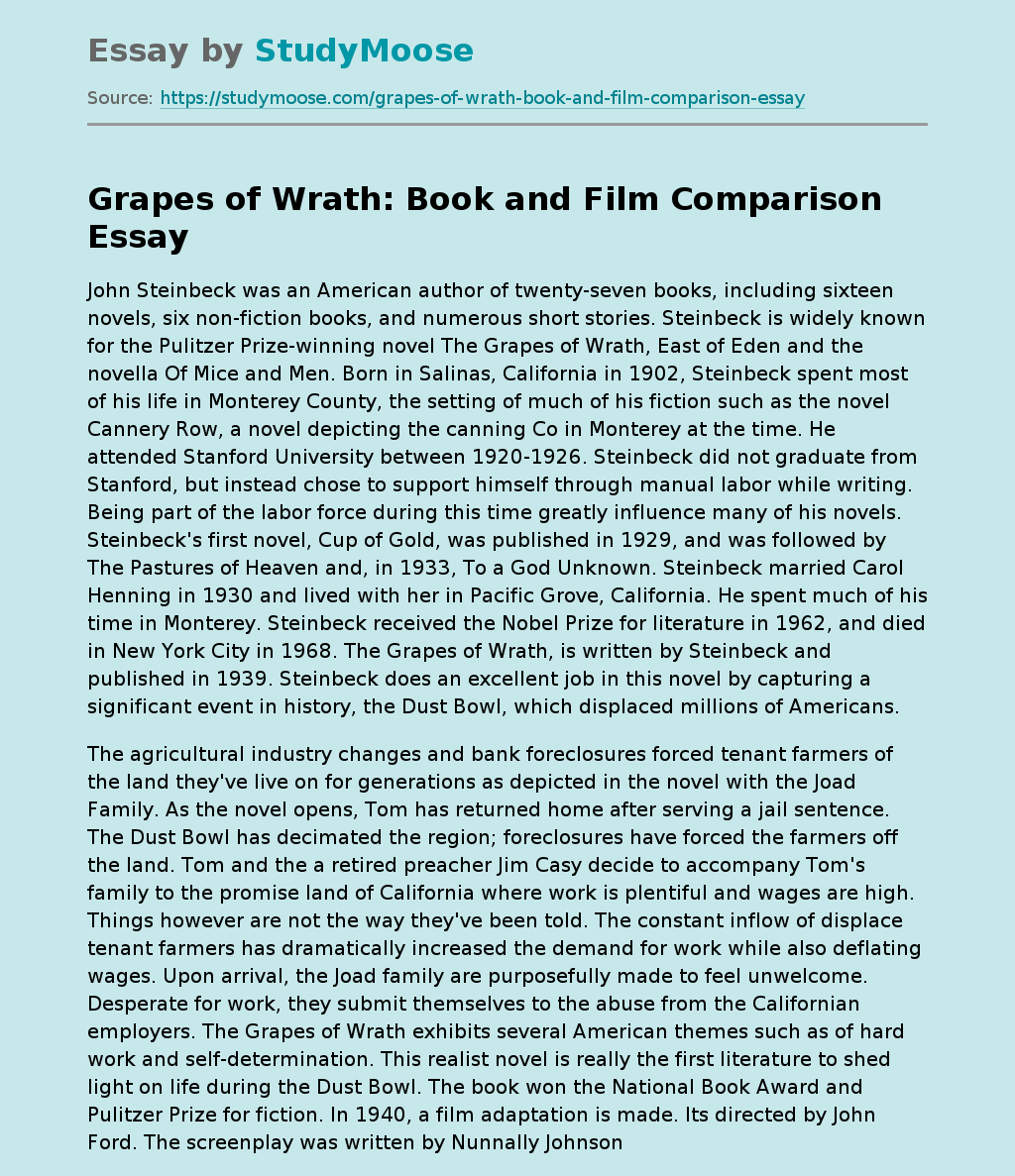