The Great Economic Depression in Novel "The Grapes of Wrath"

The Great Economic Depression affected everyone, it affected countless people of all kinds of different backgrounds. It started out in America and spread to other countries around the world. It lasted from 1929-1939 and was one of the longest and deepest depressions of the 20th century. The Great Depression significantly influenced one writer, John Steinbeck. He wrote The Grapes of Wrath and Of Mice and Men, both of which were influenced by and takes place during The Great Depression.

Don't use plagiarized sources. Get your custom essay on
“ The Great Economic Depression in Novel “The Grapes of Wrath” ”
Get custom paper
NEW! smart matching with writer

Both books tell how life actually was during The Great Depression.

Then, 1930 to 1936, severe drought plagued the Great Plains of the American Midwest, which at the time was mostly farmland (History, 2009). The drought killed the crops, and with no plants to hold the soil down, the dry dirt would swirl up into dust storms when the winds would kick in (History, 2009). That entire area became known as the Dust Bowl (History, 2009). Many farmers lost their homes since all their crops were destroyed. They were forced to migrate in search of work (History, 2009).  John Steinbeck was born on February 27, 1902 in Salinas, California (Biography).

He was the second child out of four, and he was the only boy. As a child he lived in a small rural town. He always had a fond love for books (Biography). In early adolescence, he started to become very interested in writing (Biography). By the age of 14, he knew his calling in life was to be a writer (Biography). In high school, he would stay up late and invite his friends over to his attic to hear the stories he has written (Biography). He was also an associate editor of his school’s newspaper (Gale). He used to spend his summers working on nearby farms, then later with migrant workers on a farm (Biography). Working there showed him the darker side of human nature and all of the harsh working conditions and lives for the migrants (Biography). That is what gave Steinbeck inspiration to heavily get into writing (Biography). After high school, he attended Stanford University Steinbeck was a very successful writer (Biography). During his writing career, he wrote 27 books (Biography). They were all social novels dealing with the economic issues and problems with rural labor in the United States (Biography). He lived through the Great Depression, so it is no surprise it had a huge impact on his life (Biography).

One of the books John Steinbeck wrote, The Grapes of Wrath, is an important novel that really depicts the Great Depression (Bloom). It was published in 1939 and is about Tom Joad who had just been released from prison, and is making his way back to his family. Once he gets back to his family, he learns they had lost their farm and are making preparations to sell their belongings and move to California in search of promised work (Bloom). He then joins his family on their journey to California, where they hope to find a better life (Bloom). They come across many different obsticles on their way to California. Steinbeck masterfully showed the struggle of The Great Depression through this work (Bloom). He was able to show what life was really like during the 1930’s (Bloom). He shows how the Great Depression impacted the lives of manufacturers and the common people in a positive and negative way (Bloom). He wanted the people who read The Grapes of Wrath to be able to show how harsh life was for the Dust Bowl migrants (Bloom).

Of Mice and Men is another powerful work in which the Great Depression influenced Steinbeck (Telgen). Published in 1937, it was the first of his pieces to bring him national recogntition for his writings (Gale). Of Mice and Men is set on a ranch in Salinas California during the Great Depression (Gale). George Milton and Lennie Small, the books main characters, are migrant workers during the Great Depression (Gale). At the beginning of the novel they’re on their way to work on a ranch in Salinas, California (Gale). The two have always wanted to have their own farm, they want to achieve the American dream (Gale). They are being held back from getting to their dream by Lennie, who is mentally disabled (Gale). He does not mean to but he is always getting into trouble (Gale). After the men were working on the farm for a little, another character named Candy, offers to pitch his life savings of $350 along with George and Lennie so they could get a farm, in return for letting him live with them (Telgen). They were so close to achieving their dream (Gale). They end up not getting to their dream because Lennie, who is mentally disabled, likes to pet soft things and is always getting into some kind of trouble (Gale). First he got a puppy, because it was soft, and he was playing around with the dog too rough and accidentally kills his puppy (Gale). Then, another character, Curley’s wife, walks into the barn where Lennie killed the puppy, and he tells her how he likes to pet soft things, and she tells him he can pet her hair (Enotes). He once again got too rough, and she told him to stop (Gale). He panics and breaks her neck, and she dies (Enotes). George ends up killing Lennie because he can not take care of him anymore (Gale). This novel really shows us how harsh life was during The Great Depression (Gale). The ranch in Salinas Valley gives us a look at the social realities and problems that took place during The Great Depression (Gale).

The Great Economic Depression in Novel "The Grapes of Wrath". (2021, Mar 05). Retrieved from https://studymoose.com/the-great-economic-depression-in-novel-the-grapes-of-wrath-essay 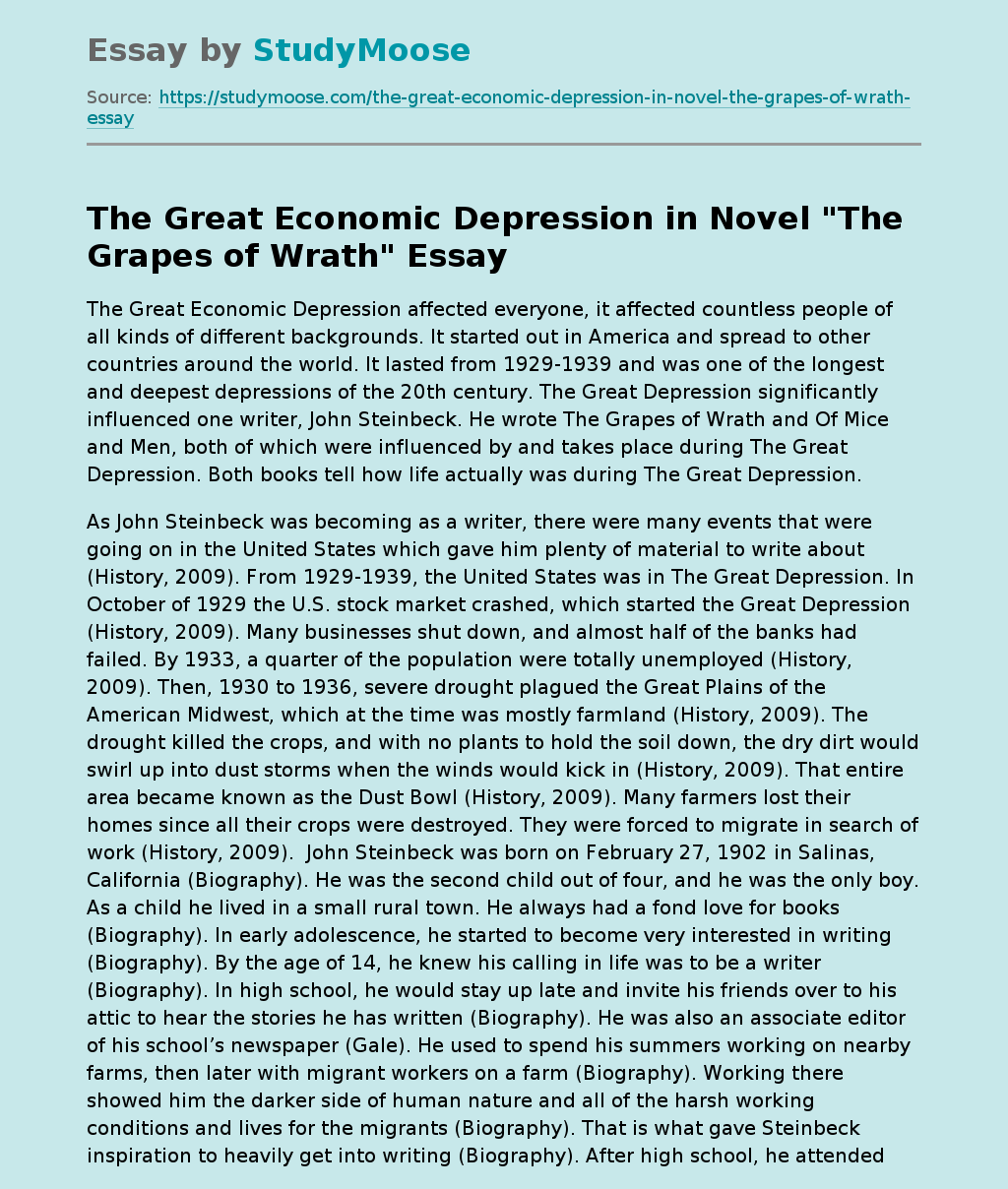