In the 1920s the American economy was headed towards an economic depression. The tariffs passed by the government and actions of proprietors had led to the downfall of the American economy. On October 29. 1929, the stock market crashed, officially signaling the beginning of the depression. During the period of the Great Depression, Herbert C. Hoover and Franklin D. Roosevelt were presidents. Both presidents had programs that were set to mollify the depression and to take the economy out of it. The actions they took and the goals they set, labeled them as either liberal or conservative.

However the characterizations of these two are valid only to a certain extent because both took actions that showed they were both liberal and conservative. Neither President Hoover nor President Roosevelt can be strictly labeled as a conservative or a liberal because they were a little bit of both.

It is commonly thought that President Herbert Hoover is a conservative. He believed in less government participation in the people’s daily life.

In his candidate speech, he renounced liberalism because it set bounds to the liberties of the people. He felt a great need to take government out of peoples lives [Doc A]. This is shown with his “hands off policy” during the depression. He believed in the business cycle and that the country would pull its self out of the depression. He did not want to use government power in dealing with this. In his message to Congress Hoover stated that the, “economic depression cannot be cured by legislative action or executive pronouncement.

As the depression worsened Hoover did begin to see that the government was needed in helping the economy speed up in the business cycle. In the 1930s, Hoover’s liberal side emerged. He saw that he could not maintain this “hands off” policy and went to help out the people. He first started helping out by merely encouraging voluntary groups in the community to help out the less fortunate. He felt that “government -national, state and local-can join with the community in such programs and do its part.” He put people to work in construction and doubled the government expenditure [Doc B]. He supported and signed into law programs and acts that offered assistance to farmers and businesses. One program that helped farmers was the Federal Farm Board. The board was authorized to help farmers stabilize prices by temporarily holding surplus grain and cotton in storage. Another was the Reconstruction Finance Corporation, created in 1932; it was a federally funded institution. It helped railroads, banks, and other financial institutions by giving out loans. The Federal Home Loan Bank Act further helped people avoid foreclosures, by making loans to building and loan associations, banks and companies.

Franklin D. Roosevelt became the president in 1932, in midst of the Great Depression. This labeled liberal believed that his program, the “New Deal”, would solve the problem of the Great Depression and restore the American economy. This plan included programs that would help the unemployed get jobs, social security issues, housing and agricultural recovery, and programs to help the banking system. Roosevelt’s New Deal assisted both businesses and individuals. For individuals, between 1933 and 1934, Congress passes many pieces of legislation to assist the poor, refinance mortgages, and create jobs in public works and government projects. For banking, Roosevelt requested Congress to approve the Emergency Banking Relief Act, the Federal Deposit Insurance Corporation, the Homeowners Loan Corporation and the Farm Credit Administration. For farmers, the Agricultural Adjustment Act set up the Agricultural Adjustment Administration in 1933 to pay money for farmers who reduce their production to increase the price of agriculture products. The National Recovery Administration (NRA) carried on its campaign for industrial production limitation and promoted a code of fair competition, which regulate prices, wages, and working hours.

For the unemployed, he established agencies and boards like the Civilian Conservation Corps, Civil Works Administration, and Public Works Administration to provide jobs. . However, as Roosevelt rolled out his “New Deal”, it became apparent that he was contradictory to himself. In his election speech in 1932, liberal Roosevelt attacked the Hoover administration for their increased government spending and involvement in people’s lives. [Doc E]. However Roosevelt’s administration had a larger debt in it first year than any of Hoover’s years; and it continued to rise at dramatic amounts, unlike Hoover’s, which didn’t have great deficits [Doc F]. Another contradiction to Roosevelt’s liberal beliefs lie in the same candidate speech of 1932.This speech could allow him to be defined as a conservative because he stated that he believed in “eliminating functions, by abolishing innumerable boards” [Doc E].

This is not first time in history, where the ideals of one party combines with an opposite party. The first two parties of America, the Federalists and Democratic-Republicans, is a prime example of this. The Democratic-Republican Party was victorious over the Federalists. However in their administration, they often used Federalist ideas in their reforms. To say that President Franklin D. Roosevelt is a liberal and that President Herbert Hoover was a conservative is only half-true. Both Hoover and Roosevelt were men of one political stance but had to use the practices of another in order to salvage the nation. The Great Depression called for the use of many different methods and approaches. Without the ambivalence of both men, they would not have been able to lead the country through the perils of the depression. 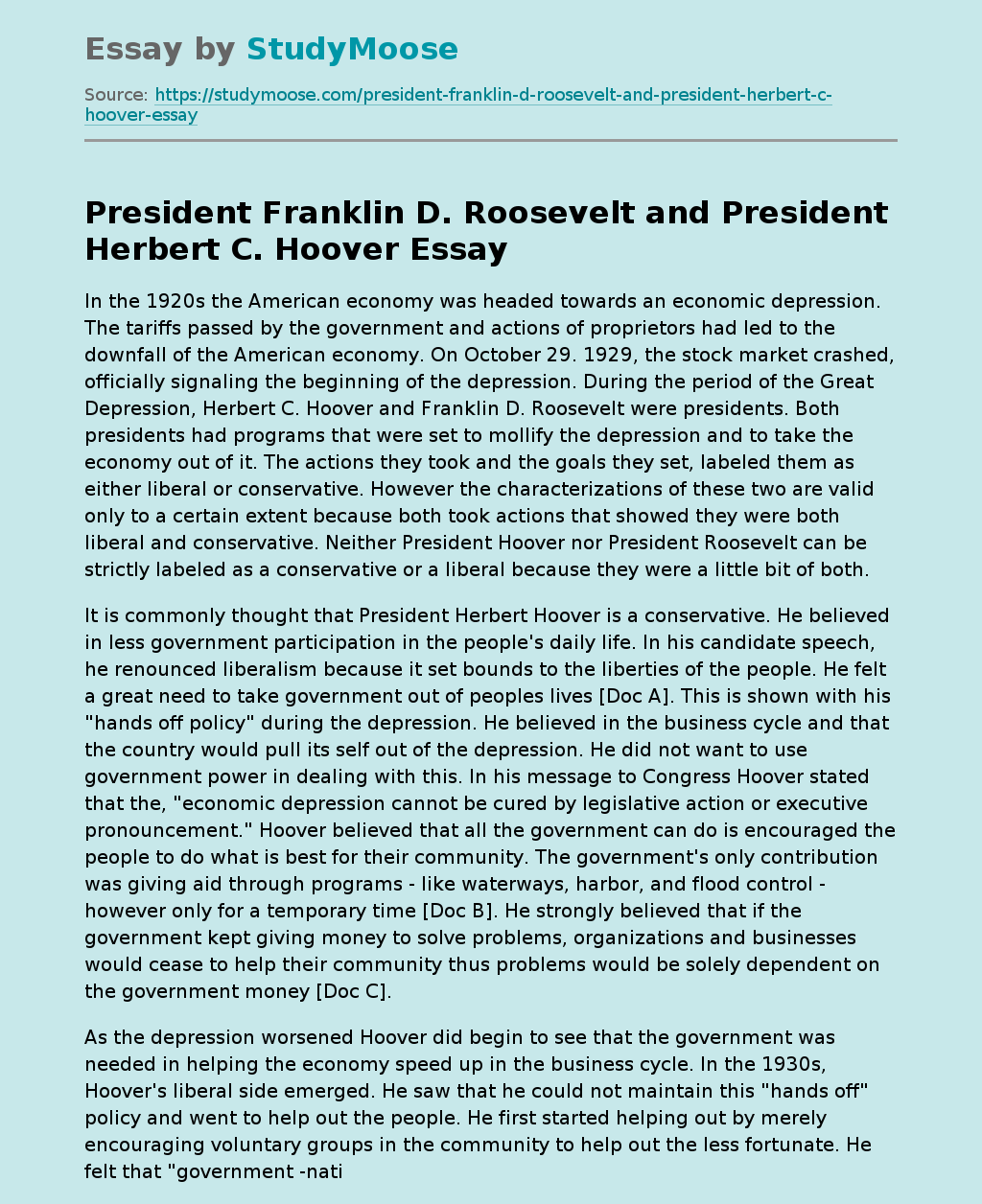