Friendship Between George and Lennie

In the novel ‘Of Mice and Men’ Steinbeck stresses the importance and abnormality of the friendship between George and Lennie by using a variety of methods. They are complete opposites, yet they share a journey through the struggles of The Great Depression as friends and have faith in the same dream. This pulls them together through the most stressful parts of the novel. These two itinerant workers meet many people along their journey, but the bond between them doesn’t weaken.

Don't use plagiarized sources. Get your custom essay on
“ Friendship Between George and Lennie ”
Get custom paper
NEW! smart matching with writer

Right from the beginning of the novel, Steinbeck has portrayed the relationship between Lennie and George appears abnormal. Steinbeck uses dialogue as a method to show the father and son roles between Lennie and George, “Look, George, look what I done”. This suggests that Steinbeck wants to show Lennie as having the mind of a little boy; when he says this, you think of when a son would say this to a father figure – in this case George – in order to get some kind of reaction.

It is as if Lennie is trying to impress George. This is quite strange, between grown men of around the same age – remembering that Lennie is a fully grown man, but has the mind of a five year old. The author uses historical context as a method and 3rd person narration to allow other people’s views about George and Lennie to be expressed, “I never seen one guy take so much trouble for another guy.” This implies, that even form one of the first characters that George and Lennie come across, we already get the impression that others think that Lennie and George have a weird friendship and an unlikely bond.

A lot of the characters have a tone made to sound suspicious, which I think is purposely written in to the novel be John Steinbeck. People found it unusual because at the time of the Great Depression, no one had friends because everyone was in competition for the same jobs. The other characters noticed this and thought that it was strange. John Steinbeck uses description as a method to emphasise the unusual nature of the friendship between George and Lennie, “Behind him walked hi opposite, a huge man, shapeless of face, with large, pale eye…”

This suggests that these two men completely contrast each other in looks, as well as state of mind. This makes you wonder why George sticks around Lennie, if he is according to the book, a handsome, smart man. They are opposites in everything, but love each other like brothers. George is very fit, healthy and ready to brace anything thrown at him, whereas Lennie is described as much more careless and in a world of his own. This shows contrasting personalities. From the start of the novel, Lennie is shown to be very childlike. John Steinbeck used metaphors as a method to show this, “dabbed his big paw”. A big paw is suggesting that Lennie has animalistic qualities, whether that is looks or behaviour; I think it is both. Because of these animalistic qualities, I think that Lennie is immature and hard to handle.

This makes the friendship between Lennie and George seem strange because I think to myself “why would George want to stay around Lennie?” Even though Lennie could wind George up and test his patience, they stick by each other. Throughout the novel, Steinbeck uses foreshadowing as a method to portray how weird Lennie and Georges friendship is, “He aint no good to you, Candy.” Earlier in the story, Candy’s old dog was shot dead by Carlson, because they decided that he was of no use to anyone anymore. Candy then told George that it would be more comforting to know that he shot the dg himself. At the end of the novel, George shot Lennie “and he pulled the trigger” because he knew that Lennie didn’t need to live anymore and would be better in heaven. George killed Lennie himself because he remembered what Candy told him about the dog. This is a perfect example of the author using correlation. Also, at the start of the novel, they were on the run and if George hadn’t shot Lennie, they would have to run again.

This shows a cyclical occurrence. Steinbeck’s idea about this friendship makes me realise that it would be extremely unusual to form a friendship during the Great Depression due to everyone fighting for jobs at the same ranches. However, Lennie and George did not compete, they stuck together and found jobs at the same ranch. Lennie treats George like a father and George needs Lennie as a companion. I think this is why they work so well together; it is because they need each other. Their friendship reaches its ultimate test, when George has to choose whether or not to shoot Lennie, as self-sacrifice. However, everything that George does for Lennie is in Lennie’s best interest. John Steinbeck makes the friendship seem unusual, but deep down, I think that it is really just natural for them to need a companion.

Friendship Between George and Lennie. (2016, Dec 28). Retrieved from https://studymoose.com/friendship-between-george-and-lennie-essay 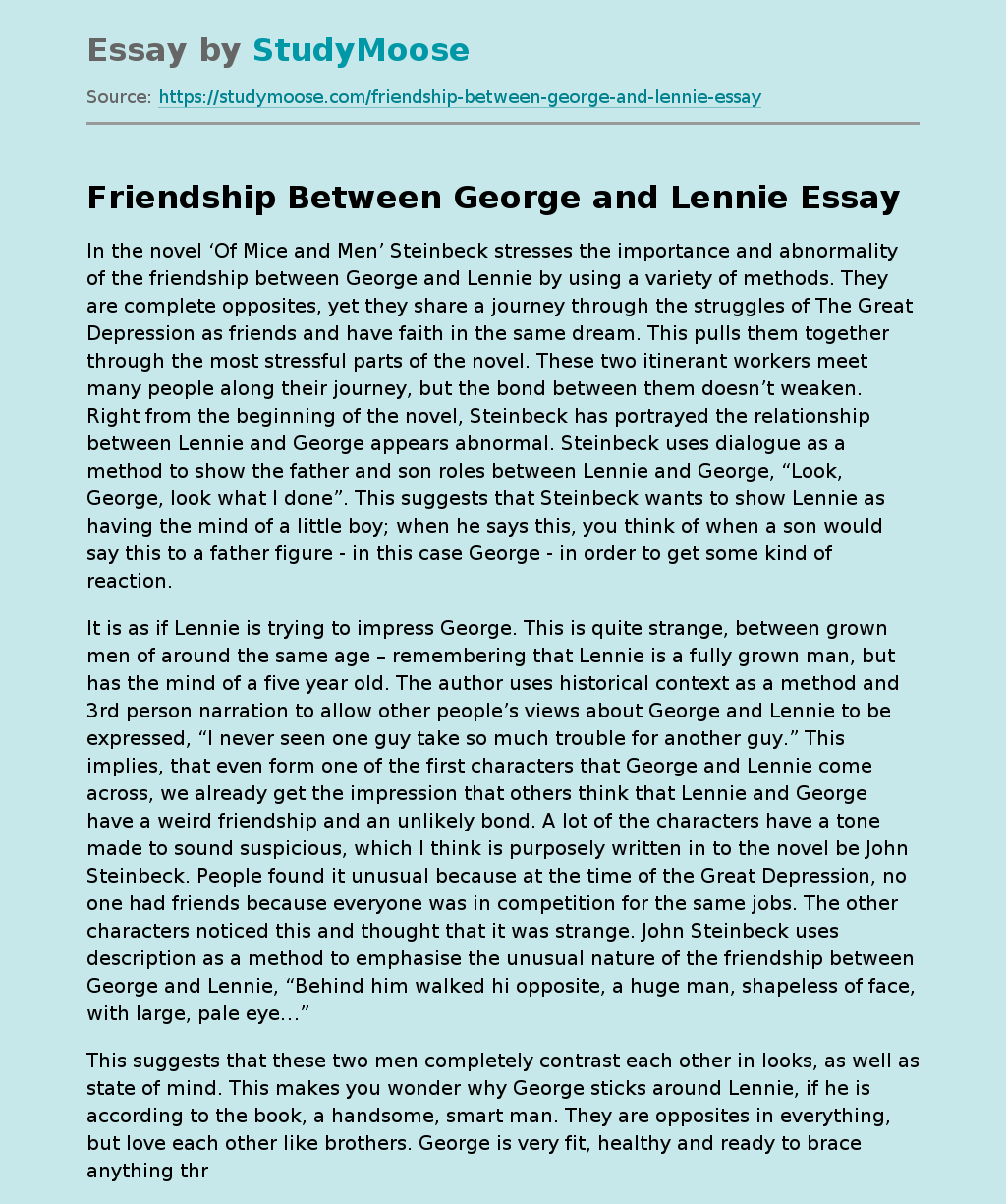