In John Steinbeck’s The Grapes of Wrath, Steinbeck uses several characters and situations to symbol something greater. The character, Jim Casy, is portrayed as an allegorical figure that represents Jesus Christ. Casy’s ideals and beliefs are very similar to those of Jesus Christ. Jim Casy is used to represent Jesus Christ, and to give the people going through a hard time a glimpse of hope and strength. Steinbeck portrays Jim Casy as Jesus Christ. The first notable comparison between them would be their initials.

Don't use plagiarized sources. Get your custom essay on
“ Jim Casy as a Jesus Christ Figure ”
Get custom paper
NEW! smart matching with writer

Both Jesus Christ and Jim Casy have the same initials.

They also both have a strong love for humanity and saw the good in people. Jim Casy let people around him know that it shouldn’t be God that they should lean on, but on each other.

In the novel, he says, “It’s love. I love people so much I’m fit to bust, sometimes. ” (23) This showed that Casy wanted people to lean rely on each other. He believed that people struggling together was by far better than one person struggling alone. Both Jesus Christ and Jim Casy go to the wilderness to get their thoughts and beliefs together. Casy’s main goal was to find the meaning of “holy”.

Casy tells the Joad family, “An’ I went into the wilderness like Him, without no campin’ stuff. ” (81) While in the wilderness, Jim Casy realizes that holy is when mankind is united as one. He believed that every person was just one piece of a universal soul and that people could only be holy if they were united.

Both Jesus Christ and Jim Casy also sacrificed themselves to protect others. Tom Joad, who already committed the crime of breaking his parole and leaving Oklahoma, knocked out a deputy. He was then instantly put in the danger of going back to prison.

Jim Casy selflessly offers to take the blame and go to jail instead of Tom so that Tom would be able to lead the family. Lastly, both Jesus Christ’s and Jim Casy’s beliefs are spread after their deaths. When Jim Casy is brutally murdered, Tom Joad vows to spread Casy’s beliefs onto more people. Jesus Christ and Jim Casy share many similarities, a few being in their names, their love for humanity, their wilderness experiences, and their sacrifices. Steinbeck portrays Jim Casy as Jesus Christ in order to show that people working together will give them hope and strength.

Steinbeck sends the message that people must always look towards a brighter future and stick together. He says, “But when they’re all workin’ together, not one fella for another fella, but one fella kind of harnessed to the hole shebang-that’s holy. ” (81) Although the Okies were being driven off their land, Casy worked hard to get the people to work together. One of the many ways Casy reaches out to people is by taking the blame and going to jail instead of Tom. By doing so, Tom was able to carry on with his journey and guide his family as well.

This gave people the incentive to start working together and relying on each other. Casy desperately wanted to give his people some hope and spirit that would allow them to look towards a brighter future. Casy says, “I gotta see them folks that’s gone out on the road. I got a feelin’ I got to see them. They gonna need help no preacher can give ‘em. ” (52) Casy knew that his purpose in life was to help those people in need. Therefore, he took every opportunity he could to help. He organized a group of migrants to picket outside a peach picking camp.

By working together, the migrants managed to keep reasonable wages for their work. Even though he knew the risks of going to jail if there was ever a leader, he still did not stop fighting for his people. Jim Casy fought for his people till death. His message, however, remained alive and touched the hearts of many of the Okies. Before Tom leaves his mother, he says, “But I know now a fella ain’t no good alone. ” (418) This showed that Casy was successful in spreading his message. He was able to make Tom realize the importance of a community during desperate times. 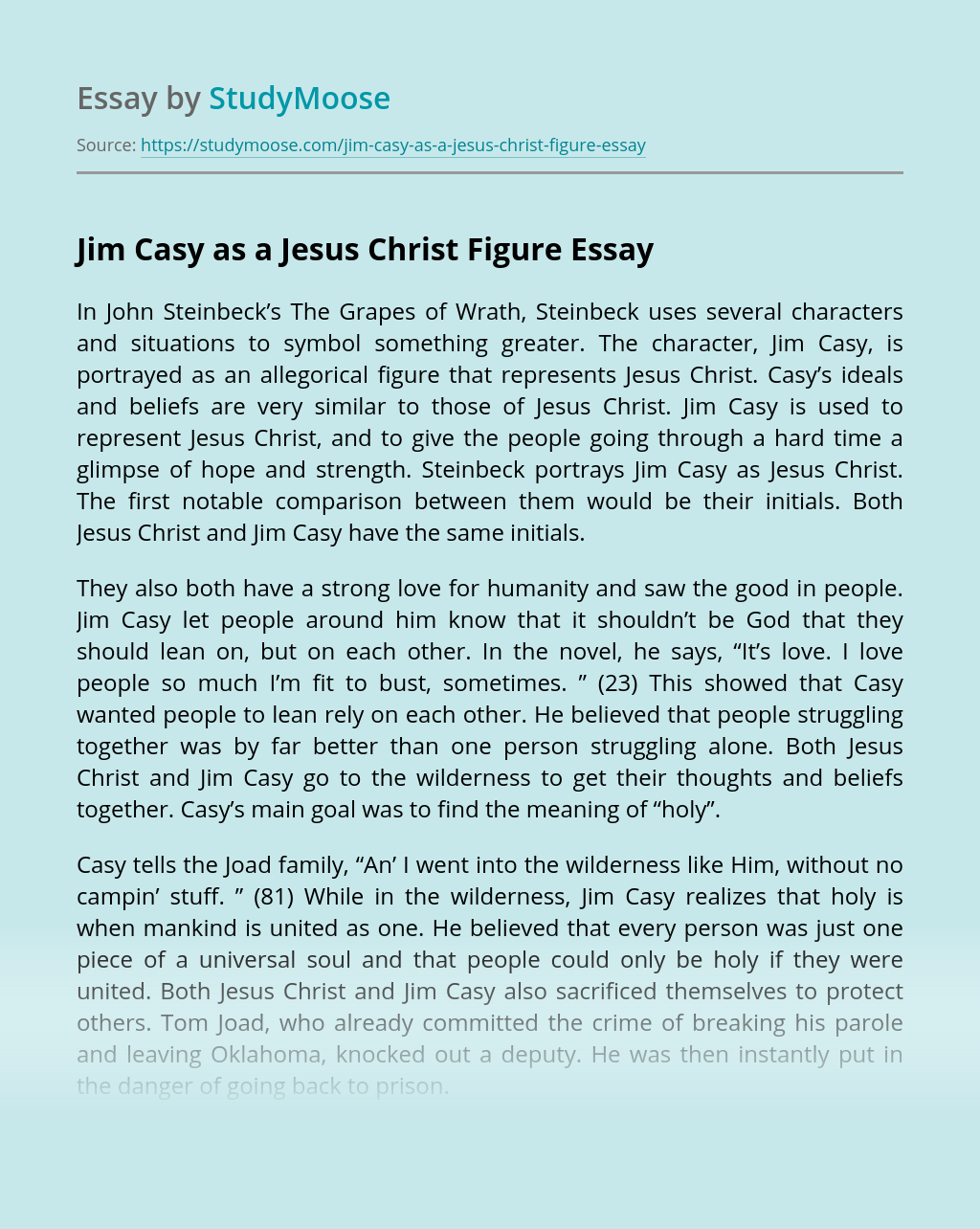