“Schizophrenia” by Jim Stevens is a poem depicting the way a schizophrenic person’s brain works. In the first line of the poem Jim Stevens says “It was the house that suffered the most”. Although he is using the visualization of a house, I believe that he is really just using imagery to portray a human. I believe that each stanza portrays a different symptom of Schizophrenia. Through my studies of this poem, I was unable to find any documentation of the poet, Jim Stevens; therefore I was unable to assess his life and his reasoning behind writing this poem.

Don't use plagiarized sources. Get your custom essay on
“ “Schizophrenia” By Jim Stevens ”
Get custom paper
NEW! smart matching with writer

Because of this I have had to make my own assumption that Jim Stevens might be writing this poem about himself. His lack of publication leaves a rather eerie air to the poem. All I found was purely speculations, of what the poem could mean or why it was written, no assurance. The second stanza tells of slamming doors, angry feet, and slamming dishes.

This portrays the behavior of a schizophrenic person. It is reckless for no reason. This is a symptom called “catatonia” CITATION Psy14 l 1033 (Psych Central), which is when the subject moves excessively and has violent behavior.

The greasy stains spreading on the cloth is imagery for disease spreading over the body. “Certain doors were locked at night, feet stood for hours outside them” this depicts paranoia; this is another symptom of Schizophrenia. Many people will have delusions that there are other people around; therefore the writer felt that he needed to lock the doors in order to keep people out.

He believed that people stood outside for hours. “Dishes were left unwashed; the cloth disappeared under a hardened crust.” Many people with schizophrenia are not concerned with their hygiene or their own well being CITATION Psy14 l 1033 (Psych Central). The writer didn’t care about his home being clean or even the state of his home in general. “The house came to miss the shouting voices, the threats, the half-apologizes, noisy relocations, the sobbing that followed”. The writer is giving into the mental instability, he is not fighting it anymore, and he’s letting it take over.

I believe that the writer is becoming so consumed with his disease that he is too weak to fight back. “Then lines were drawn, borders established, some rooms declared their loyalties, keeping to themselves, keeping out the other”. The word schizophrenia in Latin is broken up to (skhizein) and (phrēn) which literally means ‘to split’ the ‘mind’ CITATION Oxf14 l 1033 (Oxford Dictionaries). These lines signify the borders being drawn, the mind splitting up into two. Each part of the mind is choosing its side and staying there. In line 15 it says “the house divided against itself”, I believe this is directly related to the first line where it says “it was the house that suffered the most”. The author is demonstrating how the mind will split into two or more conscious personalities or “thoughts”. The house essential divided against itself becoming two different sides. The fifth stanza is physically depicting a person with Schizophrenia.

“Seeing cracking paint, broken windows, the front door banging in the wind, the roof tiles flying of, one by one”, each one of these visuals shows us a different physical attribute of schizophrenia. I think this signifies frail cracking hands, bloodshot eyes, a babbling mouth, and thinning hair that slowly falls out. Each of these is common symptoms of schizophrenia and I believe this is what the author is trying to get across. It is an extension of lack of hygiene and physical well being. The last two lines are in my opinion, the strongest, “the neighbors said it was a madhouse, it was the house that suffered most”. Instead of literally calling the house mad, the author is trying to tell us that the “neighbors” don’t actually understand what goes on inside the house. They just say they are “mad” without actually understanding what is happening inside the person. I think he is trying to make us see that it is not always as it seems on the outside, that there is more going on inside.

"Schizophrenia" By Jim Stevens. (2016, May 19). Retrieved from https://studymoose.com/schizophrenia-by-jim-stevens-essay 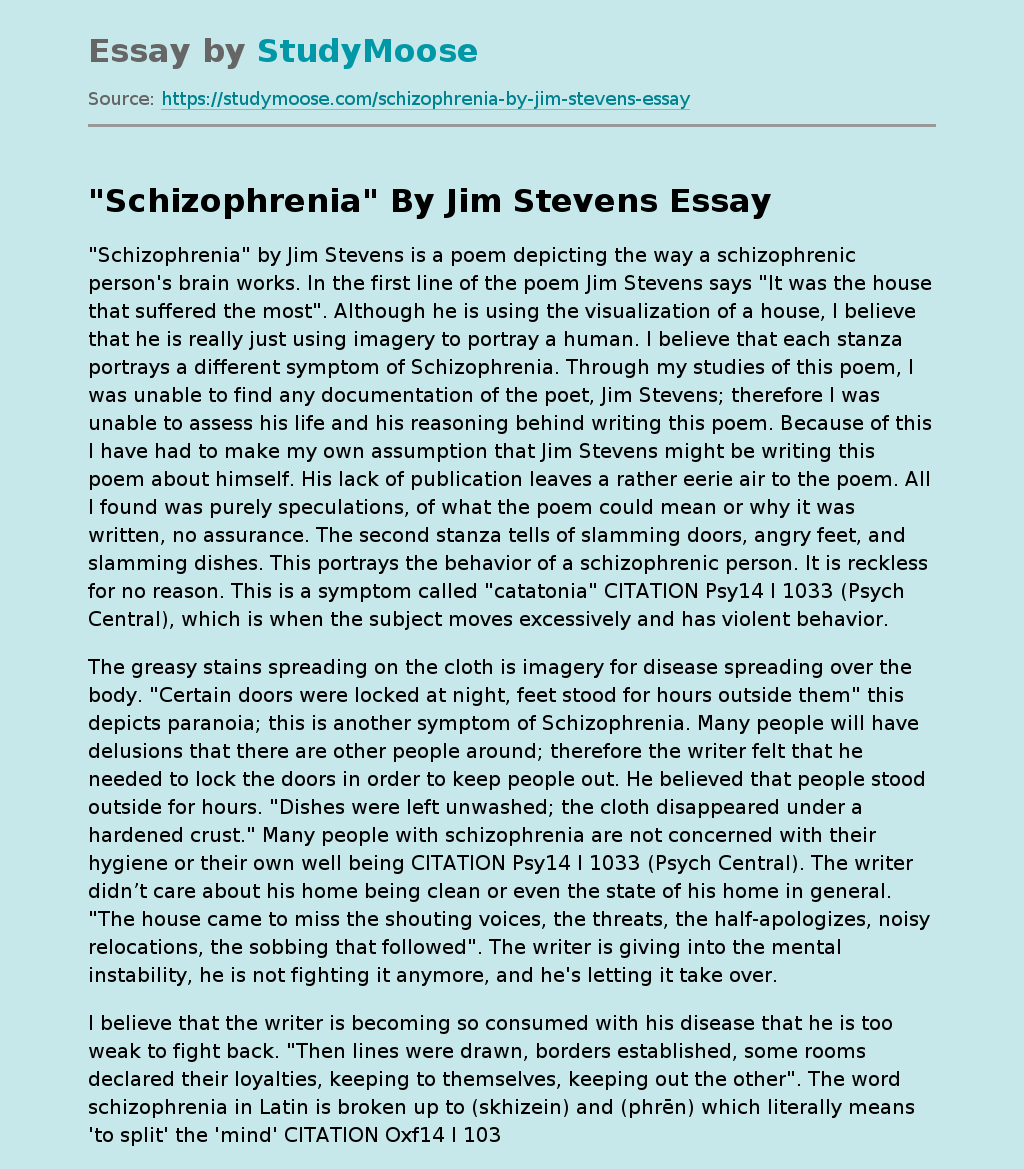