Many theories have been challenged throughout the history of psychology. Mind vs. Body is one of the most important issues that has formed the basic foundation in this field today. One of the central questions in psychology and philosophy concerns the mind-body problem: Is the mind part of the body, or the body part of the mind? If they are distinct, then how do they interact? And which of the two is in charge? (McLeod, 2007). Philosophers have examined the relationship between the two and have proposed a variety of approaches to support their arguments.

Don't use plagiarized sources. Get your custom essay on
“ The Mind-Body problem ”
Get custom paper
NEW! smart matching with writer

Another benefit that comes from studying the history is the formation of new ideas that can be discovered and the natural curiosity that arises from something thought to be important (Hergenhahn, 2009, p. 23). As modern psychology evolved, everything from sense perception and motor reactions was studied, and this study gave birth to experimental psychology. Experimental psychologists were interested in learning what was true about human consciousness in general. While some philosophers claimed that psychology could never become a science, psychologist Wundt believed that experimentation could be used to study the basic processes of the mind.

The route of the mind outlined psychology mainly through philosophy, while the route of the body traced the evolution of it through biology. The technique introspection was then introduced and used by St. Augustine. Augustine used this technique to explore the mind to find the core of God. He believed that one’s knowledge of God was accomplishable within an individual’s lifetime (Hergenhahn, 2009, p. 80). His introspection became a means of achieving a personal communication and relationship with God. He believed that the feeling of God’s love surpasses any great human emotion that there possibly is. Augustine determined that the human mind is able to know itself without confronting the experimental world. He also used the idea of Trinity, which referenced memory, mind, and will being the three qualities that we share. Each in respect to itself is life, three in one. The soul was a single unity and it is not divisible into parts. It is singular, just as the three persons are not three gods, but one God.

The route of the mind and the technique introspection then became important to modern psychology because it is a major method used by Structuralists (Mind-Body, Slide 6). During the 17th century Rene Descartes’ introduced the idea of dualism. This approach was explained in his Sixth Mediation, which he described through two main arguments. Dualism argued that the mind and body were two separate entities that interact to form the human experience. Descartes’ first argument was on his observation that minds and bodies have at least one different property. If these two things have different properties then it is impossible for them to be the same thing so therefore they are distinct (Kulstad, 1997). He claimed that the human body is a physical substance but the mind is not a physical substance. The mind has no shape, color, or mass and since it is a non-physical substance, it is not equivalent to the brain. Descartes’ second argument, attempts to prove that the mind and body are without a doubt distinct.

Descartes’ then goes on to argue that the nature of the mind is completely different from that of the body, and it is possible for one to exist without the other (Esser, 2013). He believed that if it was possible to imagine that these two substances can exist apart then God must surely be able to bring it about. Furthermore, if God is able to bring this about then this proves that they both are indeed distinct from each other, which then leads to the conclusion that they both have unique properties that cannot be shared with the other (Esser, 2013). Many problems arose from Descartes’ dualism and critic’s questioned this approach. He then questions the separation of his idea later on in the Mediations, and goes on to say that the mind and body are connected somehow, but ultimately he claims that the connection is mysterious. St. Thomas Aquinas reintroduced a sense of dualism in which the body and soul are separate entities, but he believed the soul to be immortal. Aquinas believed that the soul is something capable of living on its own. He argued that although the soul is capable of this, that capacity to exist on its own is not distinctive of a substance (Look, 2013).

Just like if an arm or leg were to be detached from the human body, it is still subsistent. This does not mean that it will work like an attached bodily organ normally would, but it still does not cease to exist from which it was formerly a part of. He then went on to say that the soul is the form of the body; it is how the body lives. This confused some and led people to believe his arguments were controversial. Aquinas then answered to this tension by saying that the soul has its own act of existence that communicates to the body, but that, without the body, it is not a complete substance (Magee, 2013). Without the body our soul is not able to exercise any of its natural activities. The rational soul can exist without the body, but it is not capable of doing anything. The separated soul can only exist but needs one of God’s supernatural gifts. Although some of Aquinas arguments have confused some, his teachings became the official philosophy of the Roman Catholic Church.

Leibniz’s philosophy on the mind-body problem proposed that the there is no mind-body interaction, but only a non-casual relationship of harmony, parallelism, or correspondence between the two (Kulstad, 1997). Leibniz believes that the mind and body do not have a casual interaction because that would mean that there is a transmission of properties from one to the other and properties cannot be detached from one substance and passed on to the other. Leibniz still did not fully agree with Descartes concept of dualism; he insisted that the mind and body are ultimately composed of the same simple substance. This simple substance was called a Monad. Monads have no extension, so there is no extended substance. God is the only Monad that can live without a body; he is capable of thinking of the universe in terms of monads.

Humans can only think of the universe in terms of complex substances or bodies. This is what leads Leibniz to believe that only we can have the problem of the mind/body interaction and this is a result of a human’s limited knowledge. He then advanced the theory of “Pre-Existing harmonization”, which claims that there is no interaction at all between the substances (Look, 2012). The soul follows the laws of final cause, and the body follows the laws of efficient cause, but they do so in perfect harmony created by God. God has set up the mind and the body so that there is a correspondence between their states.

Spinoza’s philosophy on the mind-body problem also goes against that of Descartes claim on the two being composed of two different substances. Spinoza argues that we are not substances, for only God or nature is truly substantial. He believes that the mind and body ‘run’ in parallel. Although there can be no casual interaction between the two, the order and connection of their subjective elements are perfectly correlated. The body is very complex and can be affected in many different ways. The mind works the same except with different ideas. Spinoza argues that our ideas are caused by impressions external bodies leave on our own body. Ultimately, the mind and body are united; Spinoza concludes that the ideas in our heads are always connected to the status of our bodies.

The history of the mind-body problem has had a huge influence on the emergence of academic psychology. The philosophical writings addressing this problem has shaped and set a foundation for modern psychologists today. Although each philosopher shared different views in one way or another, they all provided strong arguments on their beliefs. Today, the mind-body problem raises many questions, and with no absolute solution, it still remains a mystery. 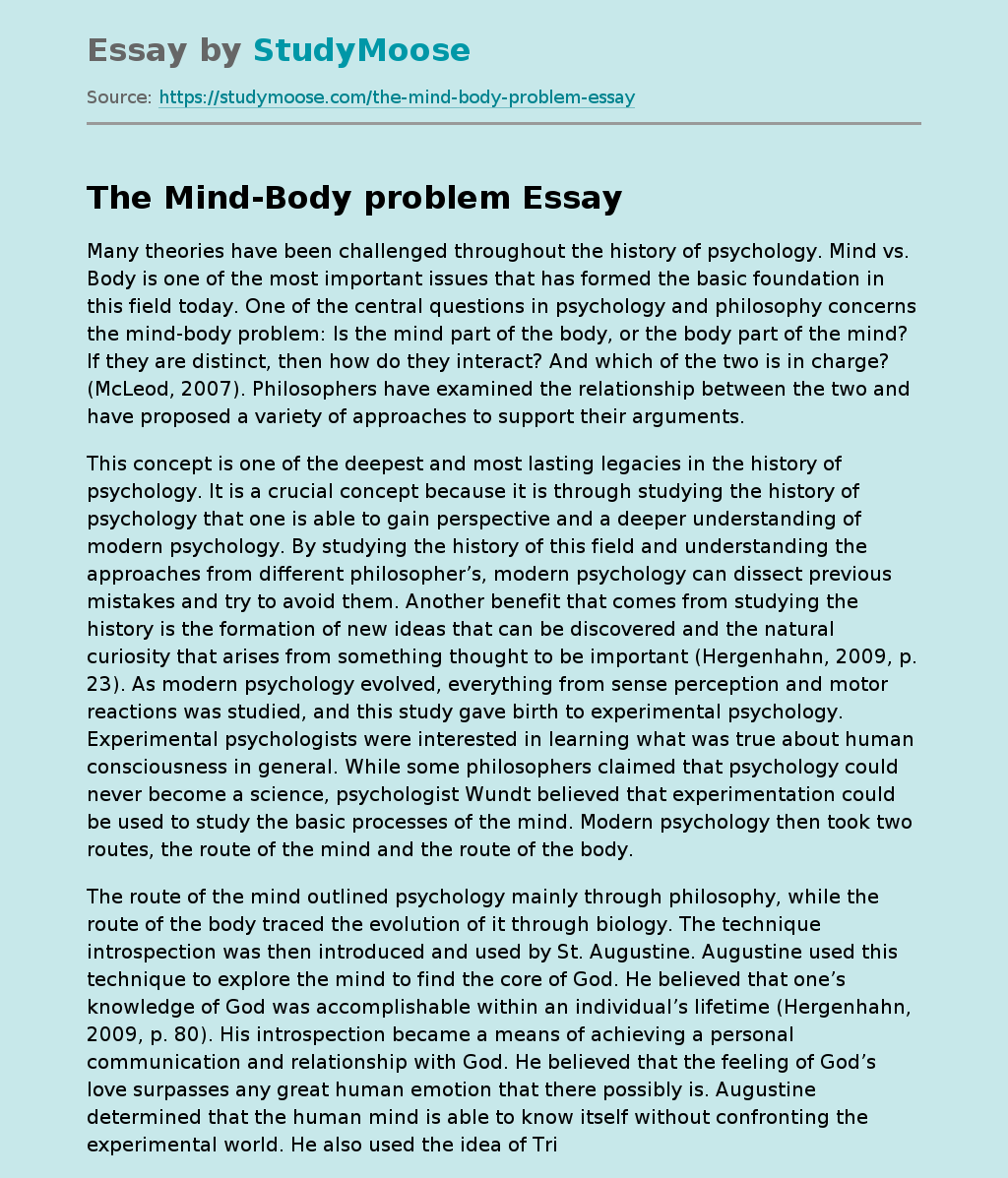