The Problem with Lying

Consider thinking about the controversial issue on lying. People usually don’t particularly care about the little white lies, but lying is never a good solution in any situation, because whether it’s a small lie or a big lie, there is always some form of consequence to each and every fib. There are a few certain articles such as, “A Philosopher on Lying,” by Immanuel Kant who also believe lying should not be tolerated in any way.

Just like in the article I mentioned earlier, “A Philosopher on Lying,” a German philosopher, Immanuel Kant, explains his point of view on lying.

Don't use plagiarized sources. Get your custom essay on
“ The Problem with Lying ”
Get custom paper
NEW! smart matching with writer

Every lie is dangerous; the size of the lie doesn’t matter. As Kant states in the article, “Don’t tell someone a lie, because then you are not treating the person with respect, as an individual.” If everyone would just imagine the person who they’re lying to, using that same lie towards themselves, they wouldn’t feel very good.

If someone believes that the right thing to do is lie, no matter the situation, then everyone else should get the right to lie too. One lie leads to another in most cases, which turns into a huge mess of lies, and that could end up hurting everyone in the end.

If someone lies to protect a friend or a family member, is it really being used in the proper situation? Well, it’s only going to hurt the person more in the end, rather than telling the truth in the beginning.

If they attempt to keep in a big secret, especially from a close one, it may tear their relationship apart just knowing how long they kept that information from them. It would be much easier and highly worth it to just get the secret over with in the beginning. Keeping in a huge secret from someone has many bad side effects; however, people need to keep in mind that if that person kept something from them, they wouldn’t be happy either. According to an interview, “Brad Blanton: Honestly, Tell the Truth,” Blanton states that “Delivering the truth is easier, takes less time, and is less stressful.”

Telling the truth sounds easier than it actually is; because action speaks louder than words. That is the main reason majority of people choose to lie. Many people disagree that every single small lie is a bad thing, because they don’t want to cause any pain or harm to the person they are fibbing to. According to the article, “It’s the Truth: Americans Conflicted about Lying,” Randy Cohen says that, “Not only is lying justified, it is sometimes a moral duty.” This basically states that people are only trying to protect loved ones from any serious harm.

Lying is an issue that people have dealt with for as long as any living person could remember. It creates problems, and that’s pretty much it. I have never seen a lie that led someone to success and have it all work out in the end. Lying isn’t the right way to go, because someone will always suffer from some kind of consequence, big or small. It is much easier to tell the truth and get it over with, rather than keeping it away as a secret and end up spilling the truth out later. Fibbing is dangerous and always messes with peoples head, ending up in a line of regrets. If someone’s like me, lies almost never work out like how they’ll plan it in the end. Always tell the truth, because it gives respect, receives respect, and it’s definitely worth it in the end.

The Problem with Lying. (2016, Feb 22). Retrieved from https://studymoose.com/the-problem-with-lying-essay 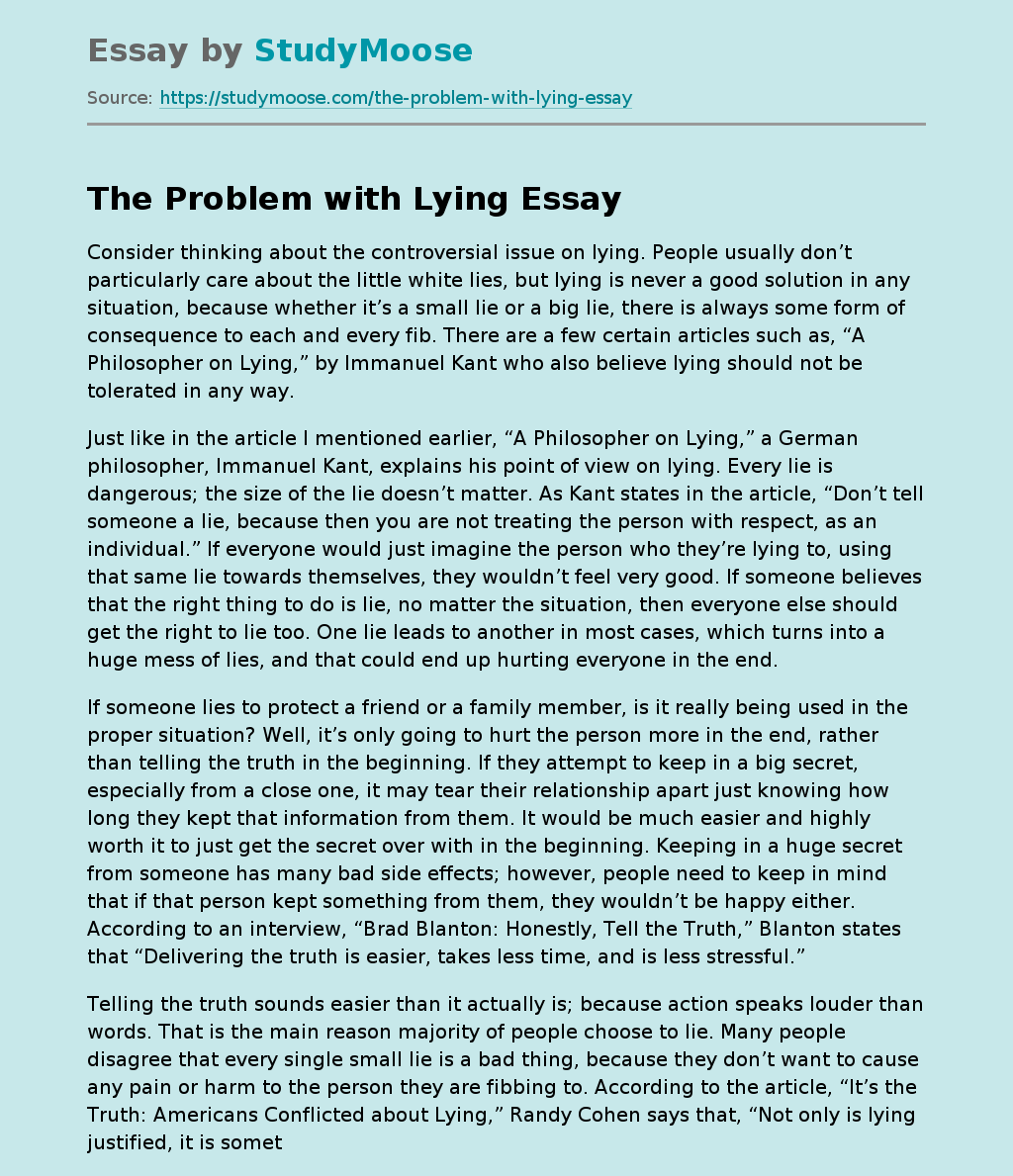