Rene Descartes six meditations Distinction of Self from the Body

Rene Descartes was a French Mathematician and a modern Philosopher who developed an original philosophy based on sciences aimed at being stable and likely to last. His method was based upon premises of senses, reason, doubt and belief. Like most philosophers his quest was for Truth and knowledge. However the nature of Truth and knowledge remains debatable among philosophers to this day. It is worth noting that a contemporary modern philosopher said at the beginning of the 21st century, the beginning of ‘ Information Age ‘ , “ Study of philosophy is now reduced to the study of language.

Don't use plagiarized sources. Get your custom essay on
“ Rene Descartes six meditations Distinction of Self from the Body ”
Get custom paper
NEW! smart matching with writer

We are distinct from our bodies ! Since the advent of human civilization many men have preoccupied themselves with philosophical thoughts of the distinction of self from the body. These metaphysical ideas , sometimes ontological, lie on the borderline of religious theology and philosophy. With discoveries in the field of physical sciences like Einstein’s ‘ Relativity ‘ the human conception of space, matter, time and forces has become clearer.

This has further fuelled interest in the field of philosophical investigation of the relationships between mind, matter and the supernatural.

This activity is a commonplace past time of the educated and curious. The scientific and methodological study of any branch of knowledge involves the formulation of – Thesis, Hypothesis and Anti – Thesis. Every Thesis has an Anti–Thesis. Is the self distinct from the body ? The senses are deceptive! What we see is spurious. Our memory deceives us. Hence a Truth that can be established is that nothing is certain. Hence it can be assumed for the time being that our senses and bodies are not true.

We are probably distinct from our bodies. Rationality is questionable ! Man is known as a ‘ rational animal’.

But the idea of rationality and the distinction between a man and an animal are debatable. Man certainly has to face an obvious ‘ identity crisis’ if material knowledge is to be trusted. The idea of a soul distinguishes self from the body ! All phenomena can’t be explained by sense-perception, thinking and physical bodies. They have to be attributed to a super-natural phenomena , ‘ the soul’. If the self is to be distinct from the body it could be in the form of the soul. The power of self-movement, sensation and thought as according to the judgment of Rene Descartes are foreign to the nature of body.

These conclusions are based on Descartes philosophical experiments with himself using the faculty of his mind. He uses his mind to probe the co-relation between subjectivity, objectivity and their distinctness from body. This method has been Descartes most powerful tool and which makes him unique in the family of modern philosophers. The awakening during sleep is an experiment. Descartes argues that when asleep he has perceived through senses many things he can’t perceive through senses while awake. These are once again Descartes experiments with himself. Descartes is careful nough to recollect his thoughts and experiences for the object of philosophical study.

‘Thinking’ is separate from ‘being’. Descartes uses his imagination to conclude that he might exist separate from his body as a source of ‘thinking’. In his legendary famous statement he once declared , “ I think therefore I am. “ Human mind and judgment are prone to error . Hence the truth has to be away from the Human mind and body. Descartes reached a conclusion that there does exist a God. God is perfect in his judgment because his mind is infinite. This is obviously not true with human beings. Hence their judgment is subject to errors and faults.

There is also a philosophical method of reaching the Truth by elimination of errors. Considering the belief that their does exist a Universal Truth away from the limitations of the human body it is reasonable concluding that we are distinct from our bodies. The existence of God is an irrefutable evidence ! Thesis that there does exist a God strengthens the concept of distinction of self from the body. It would be contradictory associating God to a body; God, Descartes assumed is infinite.

Also, the idea of life after death in the form of soul which is the belief of literally every religious heology strengthens the belief that we are distinct from our body. Rene Descartes experimented with the mind ! Descartes claims in ‘ The Fourth Meditation’ that he has trained his mind to separate from his senses and dwell only in the intellect. The result were observations and conclusions that he was totally separate from matter. Descartes uses his ability at philosophical meditations, the popular method of study and research by a philosopher. The Human Will Descartes concludes extends beyond the bodies. With the human will, many philosophers believe it is possible to meditate and separate the consciousness rom the body. Modern Science refutes distinction of body from mind thesis. Descartes himself was once a scientist before he took to philosophical pursuits.

A scientist, for example a Doctor would immediately rubbish the claims of the separation of self from the body citing encyclopedias of scientific evidence. Carl Jung’s Experiment nulls the idea of a soul. This famous Psychologist conducted an experiment and concluded that there is no soul ! The distinction between self and body is not recognized by modern psychology books. Philosophical methods might be fallacious. Philosophers employ methods based n speculations and subjectivity. These might be inaccurate and also subject to a difference of opinion even amongst philosophers. Whereas science is based on empirical experiments which no one can challenge once accepted and established. There is a self – concept in the science of Psychology. The self concept has an aura of mysticism associated with it. No one can see, feel or touch the self concept. It is reduced to ‘I’ and ‘me ‘ from the common sense point of view by nearly all domains of knowledge.

Popularly the psychologists associate the self concept , the I – Self, with the ndividual and his states of mind – Conscious, subconscious and the unconscious. Body- Ego concept can be an evidence of self and body singularity. The genesis of mental structure advocated by Hartmann, Kris and Loewenstein advocate an ego state known as the Body Ego. They suggest with impressive arguments that the ego and the id should be conceived the result of an undifferentiated state.

Our intuition equates ourselves with our consciousness. A point to be noted is that there is a dualism not only between mind and body but also between consciousness and mind ! The ancient scholarly philosophical debate ‘ Self is distinct from the body ’ is a challenging interdisciplinary study. However, the philosophy student is best equipped to handle it. The debate seems to have no end. That is what makes a debate an interesting academic field of study. Philosophers and philosophy students have to be cautious that in their xuberance they do not unwittingly clash with scientific evidence or infringe with cherished religious and theological beliefs.

The society punished Galileo because he was ahead in time than the people. The times have changed remarkably. These days society is more tolerant to new ideas. Even blasphemy against Jesus doesn’t shock the West anymore. Recent headlines of a popular newspaper says that the church has forgiven Beatles for claiming they were more popular than Jesus. Philosophers and philosophy students can play a timely role in all ages. The clear message is that they need not ostracize themselves from the society.

Rene Descartes six meditations Distinction of Self from the Body. (2016, Nov 28). Retrieved from http://studymoose.com/rene-descartes-six-meditations-distinction-of-self-from-the-body-essay 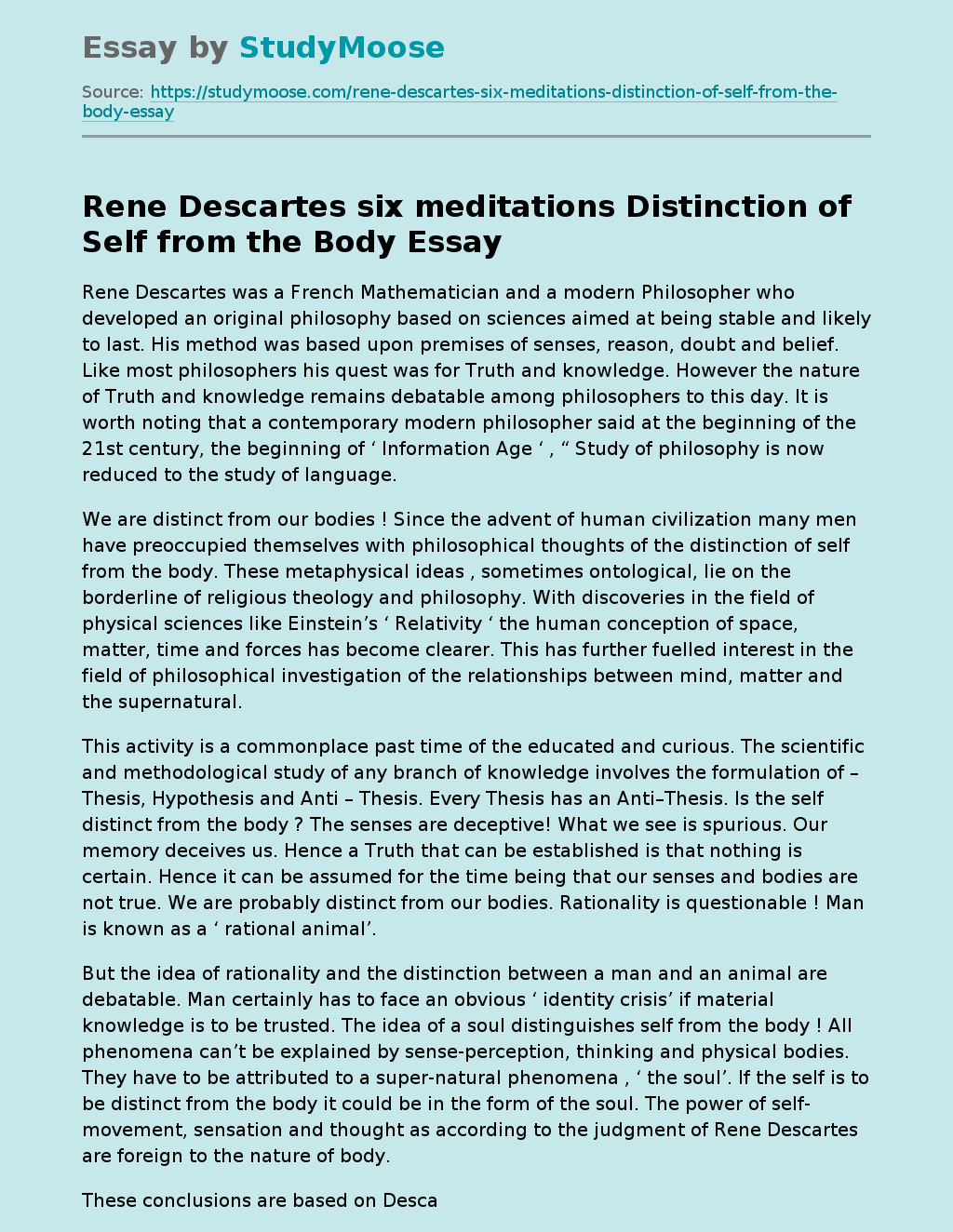