Though considered one of the founders of theology, specifically in terms of Christianity, it is also widely accepted that St. Augustine played a large role in philosophy as well. In being familiar with total skepticism, the idea that nothing can be known, Augustine advised that this thought could be disproven in at least three distinct ways. According to Augustine, these “three refutations” of skepticism are the principle of non-contradiction, the act of doubting and refutation relating to perception.

The first refutation illustrated by Augustine is that of non-contradiction.

Turn in your highest-quality paper
Get a qualified writer to help you with
“ Augustine’s Philosophical Views Against Skepticism ”
Get high-quality paper
NEW! AI matching with writers

This principle explains that when examining and presenting an idea, only the suggestion or the contradiction may be true, but in no instance, can both be true. For example, if one were to state that “I am here,” the idea presented is that the statement is true. As a result, it would be impossible to follow that idea up with the statement “It is not true that I am here.” According to Augustine, the idea may be true or the contradiction of that idea may be true, but never both.

This refutation is an attempt to prove that although total skepticism dictates that nothing can be known, its nearly impossible to argue with both the proposition and the contradiction-surely, one of them must be known as truth. This seems to be a fairly valid principle, as it leaves little room for argument in the idea that something is either true, or it is false, but rarely ever is there an alternative that could be true.

The second refutation is the act of doubting, an idea arguing that through doubting, we ultimately defeat the purpose of total skepticism. For example, if one was to argue that through total skepticism, it is impossible to know anything or that they “doubt” something to be true, in essence they are conceding to the idea that at the very least they are certain of their own existence-otherwise, how would their be any validity in their doubts? A “non-existent” person, would not be able to illustrate doubt or explain that nothing can be known, therefore, Augustine attempted to state that one’s existence negates the act of doubting anything can be known, because at least the idea of their existence is known.

While this concept is an interesting one, the validity of it seems to be questionable because it does not take into consideration that ultimately the concept of existence is not being disputed, but rather the idea of what can truly be known is in question. The act of doubting, does not seem to disprove total skepticism as much, but rather seems to be a blanket contradiction against it.

The final refutation of Augustine revolves around perception, especially sense perception, and the idea that perception in its most basic form is a type of knowledge. While we may not be able to conclude the essence of an object or concept, we can describe our own perception of it, in which case, we make no error in judgment. If we saw a pond that seemed shallow and assert that it only seems shallow, we make no mistake. Only when we conclude that the pond is shallow, with no certainty or proof to support that idea, are we mistaken. This opposes the idea of total skepticism, in that we can know at least what our perceptions allow us to determine. In my opinion, this is a valid argument because ultimately it does not profess what we know or do not know fully, but rather states that our knowledge of anything is based on our own perception of it.

Although the ideas of academic and total skepticism sought to disprove a need or even the logic behind philosophy, scholars such as St. Augustine attempted to prove that despite the fact that we do not have total knowledge in everything, we are not totally void of knowledge. The three refutations of Augustine serve to help us remember that just as there is an opposite to nearly everything, the concept of skepticism can always be rebutted when it comes to knowledge and our understanding of the world.

Augustine's Philosophical Views Against Skepticism. (2016, May 01). Retrieved from http://studymoose.com/augustines-philosophical-views-against-skepticism-essay 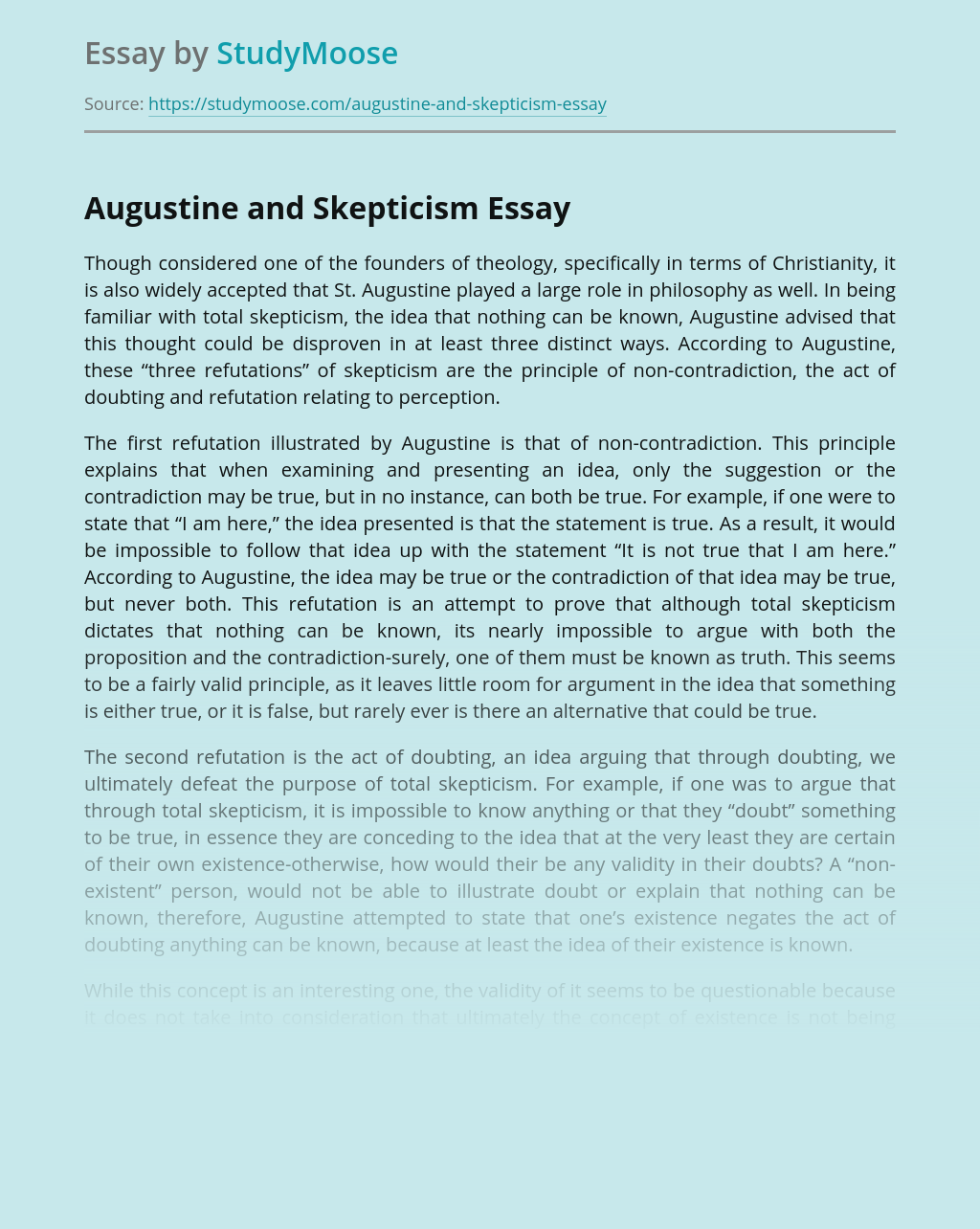 Turn in your highest-quality paper
Get a qualified writer to help you with
“ Augustine’s Philosophical Views Against Skepticism ”
Get high-quality paper
Helping students since 2015
Stay Safe, Stay Original