Plato vs. St. Augustine of Hippo

Our world has developed and flourished by the thoughts and contributions of many leaders. Among those leaders were Saint Augustine and Pluto. For many historians, Plato’s Allegory of the Cave and Augustine’s The City of God, are historical pieces that point out what had happened during ancient times. These pieces are significant because they shed some light on different thoughts and beliefs of people. Even though these works do not have similar world views, they attempt to show guidance to human life and to their beliefs.

In Plato’s Allegory of the Cave, he teaches a world view with an example of a cave filled with darkness that people inside should get out by finding the truth and seeing the light. On the other hand, in Augustine’s The City of God, a Christian author, perceived this world as a place where the heavens and the earth coexist. Even though they both showed some similarities on the concept of dualism, these two philosophers had quite different principles and foundational beliefs.

Augustine lived in the time around the fourth century. He was born in Tagaste, a Roman province in northern Africa. During his life time, the Roman Empire was on the verge of weakening and later collapsed for good. And according to Brian Levack, one of the main reason for the collapse of the once great empire was due to invasion from many sides in addition to the “unwise decisions, weak leadership, and Military Failure” in the empire (Levack 190). During this time, Constantine (AD 272-337) strived to Christianize the Roman Empire and thus Christianity was spreading all over the empire; however, there were debates and disagreements in the doctrine of Christianity and thus there existed splits among Christians that gave rise to the division in the Roman Empire.

It was during this time the idea of Monasticism and Donatism flourished. Greek and Roman philosophical thoughts existed in the fourth century. The origin of the philosophy is traced back to the classical age of Greece. At that time, many thoughts emanated from different philosophers, each with their own views. However, as many would agree, Plato (ca.429-327 B.C.E) was the most prominent philosophers in the realm of ancient philosophy. He was influenced by the scientific thoughts of people that existed long before him. Since Plato was a student of Socrates, his teachings and beliefs have paved a way for Plato which in turn influenced Aristotle.

Plato’s Allegory of the Cave, clearly explains his philosophical thoughts and understanding. Basically, this work is a dialogue between Socrates, his mentor, and Glaucon (Plato’s brother). The work paints a picture of prisoners tightly chained in a cave in an attempt to describe the nature of justice –one of the “absolute forms.” Above these prisoners is a fire that casts a shadow of objects that pass through the way between the fire and them. He describes that for the prisoners that are unable to see anything but only the shadows casted by the objects on the wall of the cave. Plato further explains that if any one among the prisoners is set free and is forced to look up to the light, he will be suffer from its glitter on his eyes till he adjusts to it. If told that what he used to observe in the caves was an illusion, he will not be well convinced and would rather choose to go back to the cave where he will claim what he sees in the cave is a reality.

However, if he is forced to stay in the world above, he will see the reality, the objects themselves: “And first he will see the shadows best, next the reflections of men and other objects in the water, and then the objects themselves.” After having a thorough understanding of the reality in the above world, if he returned back to the cave, his vision will be filled with darkness and requires time to adjust. And even if he does, he, along with his ideas and believes will not be accepted among other prisoners. As mentioned above the works and contributions of these philosophical thoughts and ideologies had shaped influential people in the world of Christianity and among them was Augustine. In his early days, his parents sent him to Carthage for his rhetorical education. During his stay, he was struck by the search for truth. And this quest led him to the probe in to the Manichaeism ideology which was widely spread at the time.

However, after discovering that the ideology could not bring the solutions what he was longing for, he become interested in neo-Platonic ideas while he was in Milan. This interest of his compelled him to become a Neo-Platonist
(Gonzalez 210). During the time of Augustine, Christianity was spreading through the Roman Empire before the time of its downfall. Also, divisions occurred in the Empire after the death of Constantine, who is credited for his attempt to unify the churches in the Empire. Levack mentions that the Huns, Alaric and Vandals played great role that contributed for the collapse of the once great empire in the year A.D 410(191). In addition to this, many sources point out many reasons for downfall of the Empire, but most of them point their fingers at the transformation of the Empire to Christianity. According to historians, Polytheist claims that Christians were more interested to serve God than the Empire and have a sense of forgiveness towards enemies. Therefore both polytheist and pagans stressed that the Christian God failed to protect the Empire.

In an attempt to prove Christianity was not a threat, and also to clear the misconception about the allegation that the Church profoundly contributed to the Roman collapse, Augustine wrote The City of God. Basically, the work mainly revolves around two cities: The Earthly city and the Heavenly city. The earthly city is a typical example of a place, presumably inhabited by pagans and polytheist and is found on earth. On the contrary, the heavenly city sojourns on earth. He makes a comparison between the two. He says that both are formed by two loves: “the earthly by the love of self” and that of the heavenly by the love of God. While the earthly city pleasures from the glorification of itself and its men, the heavenly counterpart pleasures in the glorification of God. The earthly operates on its own; that is, with the power, wisdom and rule of men while the heavenly is fully dependent on God. Augustine criticizes men of the earthly city for excessive pride in their own wisdom and for unthinkable representations of the image of God they made to worship, and this men that he is referring to are neo-Platonists.

Augustine explains the two opposing aspects that exist in the city: peace and Conflict. He mentions that the earthly city is characterized by arguments, wars, and quarrels. Although victories over such aspects exist, he claims that it is either “life destroying” or “short-lived.” On the contrary, he points out that the heavenly city is characterized by the existence of everlasting victory and “never-ending” peace. He sets a clear demarcation between different aspects of both the heavenly and earthly cities. He explains the necessity to live by faith so as to escape the distraction of that surrounds to deceive families. During his time, since the idea of monasticism and pilgrimage was well known, he encourages that families practice these idea to their advantage to gain heavenly blessings and everlasting peace, and lessen the burdens of the body, a prominent goals of all human beings that live in both cities. However, he contends that their approaches are totally different: the earthly city has its own set of rules designed by the will and desires of men.

Also, the earthly city has ideologies and principles set forth by philosophers, such as polytheists, who Augustine thinks are foolish for their earthly wisdom and understanding of the truth, and yet deceived themselves would also deceive the inhabitants of the earthly city: “the earthly city has had some philosophers whose doctrine is condemned by the divine teaching, and who, being deceived…supposed that many gods must be invited to take part in the interest in human affairs…” furthermore he explains that there would always a discord between both cities, and everlasting peace on earth could be attained through the unity in worshiping one God. Augustine’s City of God was one of his influence works that left positive marks on the thoughts and beliefs of many generations after him. According to Michael W. Goheen and Craig G. Bartholomew in Living at the Crossroads, he played a vital role in influencing the thoughts of many that provided structures for medieval culture. But still they point out that this work of his is a combination of elements of Scripture and neo-Platonism (77). This shades some light on how he was deeply influenced by Greek and Roman Philosophical thoughts prevalent during his time.

Besides, Goheen and Bartholomew argue that Augustine’s deep immersion in neo-platonic thoughts had an adverse effect on the development of western culture (77). This is evident in most of his works that “bore a [n]eo-Platonic stamp” (Gonzalez 212). Finally, if it was not for Augustine’s works, the Christianity that we have today might be different. It was through his work that became an influential theologian that paved the way for both medieval and modern Christianity: Walsh and Middleton label him as “the father of middle ages” (111). Although some say that his immersion in neo-platonic thoughts had negative consequences, Gonzalez points out that he was the most quoted theologian in the Middle Ages and thus “became one of the great doctors of the Roman Catholic Church” (216). It cannot be denied that his biblical world view has some stains of platonic philosophical views; however, some of these thoughts have some similarity to the bible.

For instance, Plato assumed that there is a supernatural power which he labels as the “One” which is the reason for the existence of everything. Besides, he point out that there is another world beyond human existence –a world which he calls the “above world,” which exists at a higher level beyond the existence of humans. This assumption is akin to that of what the bible states as the Heavens. Thus, although Augustine’s works, thoughts and world views are deeply influenced be Greek and Roman Philosophies, he is still the “favorite theologian” and the most prominent figures for his significant contributions profoundly contributed to the realm of Christianity. As a Christian, I was surprised to discover that how these works are still influential in our world today. Furthermore, these works will broaden the minds of Christians in terms of the history of Christianity and its doctrine. Finally I contend that these historical pieces will give a slight sense of the theological and philosophical world views and broadens ones understanding.

Plato vs. St. Augustine of Hippo. (2016, Apr 01). Retrieved from http://studymoose.com/plato-vs-st-augustine-of-hippo-essay 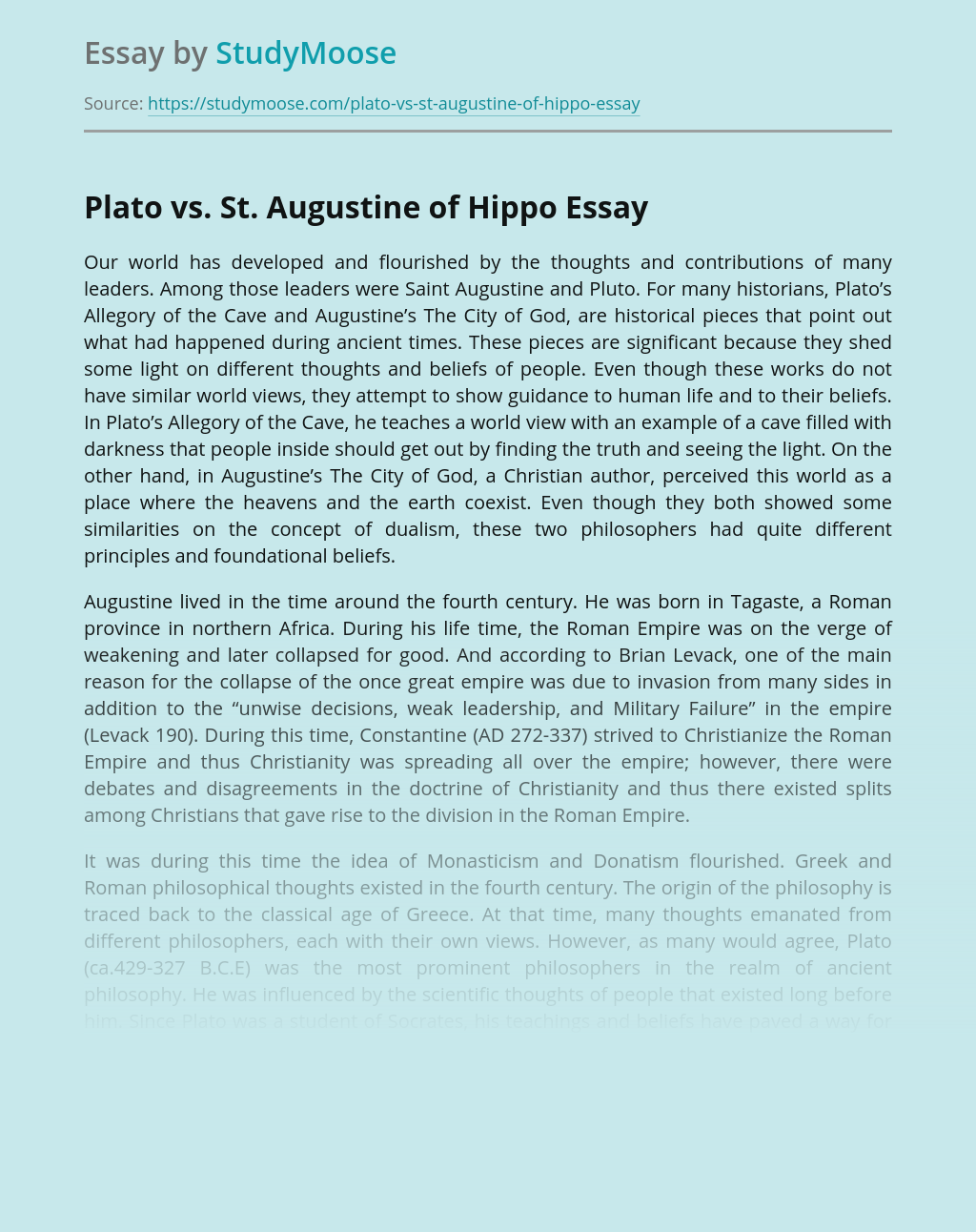 Don’t waste time
Get a verified writer to help you with Plato vs. St. Augustine of Hippo
Hire verified writer
$35.80 for a 2-page paper
Stay Safe, Stay Original