Marketing with Unabashed Humour: The Art of the Soft Sell

Marketing with Unabashed Humour: The Art of the Soft Sell

Advertising as it does in Western markets that remain reticent about the product category, Belgium-based Zazoo needed to accomplish several tasks in this TV advert:

Marketing goal: expand the market of condom users whilst gaining a larger share of current users.

Limitation: product cannot be shown in its proper usage context (man and woman being intimate) without inviting a backlash.

Convey the benefits of using a condom by exaggerating the downside, the strain and stress that children bring to the life of a young adult parent.

Don't use plagiarized sources. Get your custom essay on
“ Marketing with Unabashed Humour: The Art of the Soft Sell ”
Get custom paper
NEW! smart matching with writer

Call to action: By dint of the sardonic humour the execution portrays, make it so striking and memorable that target users will remember “Zazoo” on the next purchase occasion.

Wind up with a voiceover about the brand being “fun, sexy, safe”.

This wonderfully high-impact advert works on several levels with its humour and empathy.  The humour works to provoke attention and interest, making it likely that the target audience will listen to the branding and brand imagery messages, thrown in almost as an afterthought in the last seconds of the commercial.

In standing out from the awful sameness of commercial TV spots, secondly, the comic dramatization of the hapless father is apt to get talked about (Marketing News Blog, 2006).  To an adman, word-of-mouth is worth its weight in gold.  Thirdly, the advert disguises with sardonic wit the morally-unacceptable message that children can be such a bother, one had better use contraception.

The most persuasive element of the advert lies in the empathy it creates.  Every parent watching this will agree that children can be insufferably bratty.  For all the tantrums of the child, what plays out is, in effect, a dramatic vignette that shows, rather than tells us, the unanticipated consequences of unprotected sex.  Aristotle himself had already recognized the power of the really effective drama to provoke horror and pity.  There is as well, the dramatic build-up.  For 90% of the advert, we are left wondering what it is all about.  There is an awful suspense to the execution as the audience wonders how long before the parent can bring himself to put a stop to the tantrum.  The emotional affect is all the more telling for the surprise sprung on us (Stern, 1994) and the irony of cause and effect the advert communicates: this is what happens when you do not “USE CONDOMS”, the sole sub-title we see just before the advert closes with brand name and key retailer chains.

Advertising effects research recognises that drama encourages consumers to perceive products as solutions to problems.  On a rational level, the audience attributes positive causality to the condom brand.  In terms of affect, attribution theory suggests that such executions provoke a great deal of empathy and sympathy.  It is very likely that the Zazoo approach will come across very well in many cultures because the problem situation, the comedic contrast, and the irony of condom-as-solution will be recognized by target parents everywhere.

One may also postulate, as Hobbes did, that the effectiveness of this physical comedy lies in audiences achieving “a sudden glory”, the abrupt realization that one recognizes the problem and has hit upon  the solution (Stern, 1996) whereas the glum father obviously does not.  That it is too late for him but we in the audience can still take steps to avoid such mishaps in the future contributes to self-satisfaction, to patting ourselves in the back for being so clever, and thence taking the recommended action.

Perhaps the ultimate testimony to the impact and persuasiveness of this advert is the accolade of harsh peers in the industry who are not easily impressed.  This work garnered a Silver Lion at the 2003 Cannes International Advertising Festival and a Golden Shark at The Shark Awards at Kinsale/Ireland and a Gold at Eurobest 2003 (Viral Video Ads, 2007).

Marketing with Unabashed Humour: The Art of the Soft Sell. (2020, Jun 02). Retrieved from https://studymoose.com/marketing-with-unabashed-humour-the-art-of-the-soft-sell-new-essay 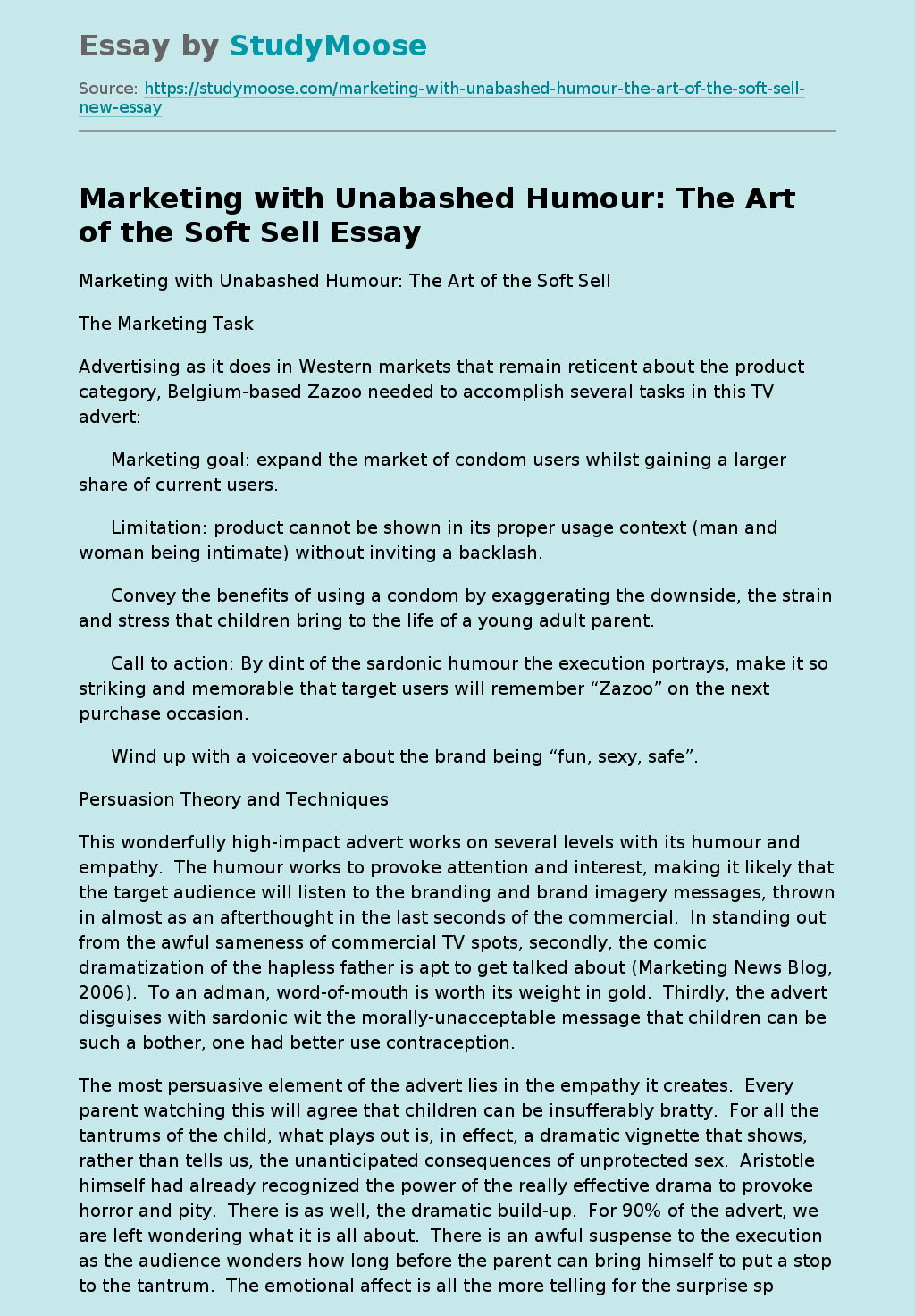