'With These Words I Can Sell You' by Lutz

Professor Lutz’s article ‘With these Words I can sell you Anything’ describes many of the advertisement business tricks to draw consumers into buying their products. He describes the advertiser’s tricks as Weasel words, which are words that seem to mean one thing but really mean the opposite. To avoid falling into these traps of advertisers he stressed that consumers need to be educated consumers. The language he uses is very informative and persuasive to let the consumers know that they must pay attention to these Weasel Words.

Don't use plagiarized sources. Get your custom essay on
“ ‘With These Words I Can Sell You’ by Lutz ”
Get custom paper
NEW! smart matching with writer

The structure of the article is very straightforward and easy to follow and to stay focused on the topic. On each topic Lutz gives plenty of examples of how advertisers use these weasel words along with stories of how people get caught up in these tricks.

When in actuality help means the total opposite. Advertisements usually put this word in front of very powerful words so that the consumer doesn’t pay attention to the word help. Meaning it ‘may’ help but isn’t in fact guaranteed. Another weasel word is virtually; this word is used just like the word help. One example of how they use this word to fool people is the case of the lady and her birth control.

When she read the birth control box it said that it provides virtually 100% protection, being an uneducated consumer, she thought that would grant her immunity from getting pregnant. When she took this to court she lost because the definition of virtually gave the product room for certain incidence of conception.

‘With These Words I Can Sell You Anything’ is an article written by William Lutz, explaining the tactics of marketers to sell their products. It is an excerpt from his book Doublespeak, published in 1990. William Lutz has been called ‘the George Orwell of the 1990s’, and indeed many of his books are titled in direct reference to Orwell’s works. Lutz claims in his article that there’s a big conspiracy where the people trying to sell us things are giving us ineffective products disguised as something much better. Unfortunately, he comes off as paranoid; someone making a big fuss over that which in reality isn’t a big deal and as someone late to the party, only discovering something long after everyone else.

The first issue with Lutz is his hatred of the word help’. He says that when a product claims to help relieve your cold fast’ that consumers should be wary before buying the product. He says that the word help’ doesn’t mean cure’, and at best this medicine will only relieve your symptoms. He also claims that fast’ could really be any period. Unfortunately, if people stop beating up the advertisers and look at their words rationally there’s no problem with buying their product at all. There aren’t many products out there that will instantly cure a cold the moment it’s taken, and surely it isn’t cheap. If there’s an alternative that can relieve the symptoms, hasn’t it basically helped to cure the cold? If someone buy this medicine and takes it for the duration of a colds natural cycle, that person is much better off than if they took nothing at all. Of course, fast’ could mean any period, but if it took more than a day to take effect nobody would buy it more than once. See, Lutz has the proper idea when it comes to paying attention to words, but he fails to see the big picture when it comes to how effective the product is despite the words.

An unpopular product would never last on the market. Lutz gives numerous examples of ‘weasel words’, which are defined by him as words meant to seem reassuring but in reality, mean nothing.He devotes paragraphs to each phrase, such as virtually spotless’, new and improved’, and like magic’, picking them apart like a vulture until nothing left remains. Again, using common sense it’s almost insulting to think that anyone would be fooled by these words. When someone sees an ad for something and its bottom line for making you buy a product is that it works Like Magic! ‘ how could they help but laugh? It’s disturbing to think that anyone would be fooled into buying these products multiple times if they’re so ineffective.When a person see a product they need like laundry detergent that claims it can completely erase stains, why wouldn’t they go test it? It can clean their clothes like any other detergent, and if it removes stains they might have a great product on your hands. If it doesn’t, they simply look for a different product. Lutz acts like once something is bought the consumer gets stuck with that for life, with no alternatives.

The beauty of a free market is that there are countless products for the same thing, and they all work differently.Nobody will be fooled into buying something that doesn’t work more than once. While Lutz does correctly examine that advertisers use different methods to persuade consumers to buy products, he falls flat on his face when he takes up 11 pages explaining things that should be obvious to any high school graduate. If you pick apart someone’s words enough you can make anyone seem like the devil, and unfortunately that’s what has happened here with advertisers. Consumers have friends and family buying alongside them and all of them can communicate what’s effective and ineffective to each other.It’s simply foolish to assume that a product that does nothing is going to get more than a few purchases before the word gets out that it’s worthless. Hopefully people learn to determine the effectiveness of products for themselves, and not look up to a pale imitation of Orwell, who uses the better mans words in an attempt to further his own career. Use your own judgment, not that of someone who ends their articles in a ridiculous and amateurish parody of Twenty-third Psalm.

'With These Words I Can Sell You' by Lutz. (2020, May 08). Retrieved from https://studymoose.com/with-these-words-i-can-sell-you-by-lutz-essay 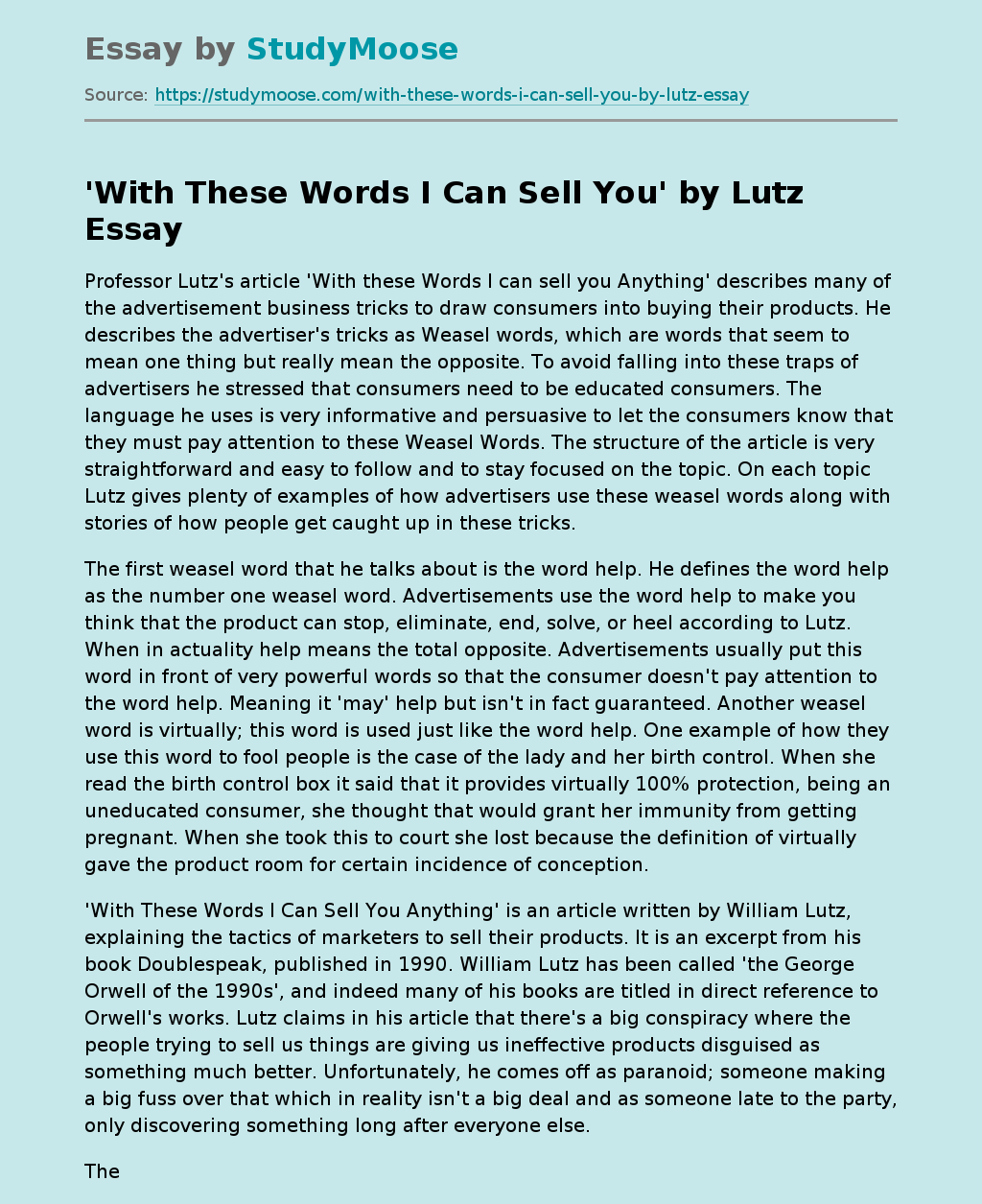