Analysis of the story “Can-Can’’ by Arturo Vivante

The story under the title “Can-Can” was written by Arturo Vivante. He was born in Rome and got a medical education but left his medical practice in the mid – 1950 when his short stories began to be published. Though Vivante writes in English and has lived in America for much of the last 35 years, his Italian heritage has an undeniable presence in his fiction. His short stories often are read like reflections or memories of a distant and foreign past that a reader cannot help but link to the life of the transplanted author himself.

Don't use plagiarized sources. Get your custom essay on
“ Analysis of the story “Can-Can’’ by Arturo Vivante ”
Get custom paper
NEW! smart matching with writer

The story “Can-Can” runs about a man that is going to the secret meeting with the other woman. But before seeing off he watches quite an interesting scene: his wife dances can-can. Suddenly it occurs to the man that he doesn’t want to leave but the date is already arranged. So having arrived to the summer cottage with his girlfriend the man finds himself thinking of his wife and that surprises him greatly.

The story “Can-can” by Arturo Vivante is of social-psychological genre. Here can be observed such social themes as the role of faithfulness and attachment in the family life. But in the same time this story can be considered to be of psychological one as here is shown the feelings and thoughts of the protagonist of the story. The story “Can-Can” is mostly a narration which is rather dynamic and gives a continuous account of events (husband talks to his wife, leaves the house, calls his girlfriend, waits for her at the café and then goes to the summer cottage).

It has some elements of description (such as “she had no stockings on, no shoes and legs looked white and smooth, her eyes had a mockery in them”) and also dialogue and monologue. Firstly the atmosphere of the text can be considered to be bright as everyone smiles at each other, wife dances can-can, children are glad, but it is only outside, in inside it is very grievy.

The matter is that the husband cannot understand his emotions, his feelings. He cannot understand why everything has suddenly changed for him: he doesn’t want to leave any more, he doesn’t want even to think about forthcoming petty intrigue but nothing can’t be changed. The date is already arranged and he should go. But even being already in embraces of another woman the man cannot get rid of an image of his wife dancing can-can, smiling so careless, with no stockings and shoes on, and her legs that looked so white and smooth. All these make him feeling lost, confused and grievy. It can be seen quite clear that the husband suffers because of forthcoming unfaithfulness and that’s why during the story the mood is getting more stressed. The text touches upon the issues concerning family ones such as unfaithfulness. The problem raised by the author is quite clear and understandable: the husband intends to have a love affair and is already unfaithful to his wife.

However some feelings of upset, comprehension of the fact that his wife is still a beautiful and pretty woman, not broken by a small stuff, a woman that is still able to give him love and firmness – doesn’t allow him stay calm. The reason of these doubts becomes the very dance can-can, to be more specifying not so much dance as the fact of execution of this dance by his wife has surprised him, has unsettled him. He expected her doing sewing or washing, doing something uninteresting or unattractive but not doing can-can, not doing the dance of passion and feelings. And the rhetorical question “Why was she doing that of all times now?” shows the husband’s condition of confusion at the sight of this unexpected scene which shows familiar for a long time and already such habitual wife in absolutely new shape. The protagonist of the story “Can-Can’’ is the husband. He doesn’t often leave the house, spends his time hanging around and helping his wife.

His speaking name is Mr. Fix-it. But the most indicative feature of his character is his work – he is a painter and the very fact can explain the aspiration of the husband to something new in his life. May be he is in the search of muse that will inspire him for new creative labors and it has incited him to the faithlessness. He can’t derive inspiration from his wife any more, she is an endured image for him and he can’t draw nothing new from her, and that why he resolves to such an act. But that dance has ruined all his plans, has frustrated all his tensions, has overturned all his conceptions. Even being with his mistress the man can’t efface the image of his wife who has revealed absolutely in new light. Here can be pointed out quite ironical moment: when Sarah comes she finds the man in thoughtful condition. Firstly she becomes quite upset as she assumes that the man thinks of his wife. But after the man says that he thinks of somebody doing can-can Sarah feels relief saying “I was afraid you were thinking of your wife”. In the story “Can-Can” we can observe the clash of two types of women.

The wife is a householder with children, that all day long is busy with sewing and washing and the mistress is a kind of serious businesswoman. Talking about a wife we should point out that she is fairly a wise woman. Being jealous, she doesn’t show it her husband and remains quiet and funny. We can see that she loves her husband as any woman does, she feels safer with him at home and the husband in his turn helps her with looking after the children. This woman is depicted in the image of the loving wife and careful mother that dances with her children “…can-can, kicking her legs up high in his direction”. As for the other woman, Sarah, she is also married. She is described as a selfish woman that envies the wife of the protagonist as she says: “Oh, for a moment I was afraid you were thinking of your wife”.

In conclusion, jealousy to the husband is the only correlation between these two women, in all remaining they are completely opposite. One of the most important moment that should be discussed is of course the role of the title of this story. First of all I was interested why the author had chosen the very dance for influence on the husband. For this purpose I had addressed to the history of this dance. Can-Can is is a high-energy and physically demanding music hall dance, traditionally performed by a chorus line of female dancers who wear costumes with long skirts, petticoats, and black stockings. The main features of the dance are the lifting up and manipulation of the skirts, with high kicking and suggestive, provocative body movements. The cancan first appeared in Paris.

Firstly, can-can was a scandal dance but nowadays this dance is a symbol of feminity, passion, bright fellings. So we can say, that the title plays here a symbolizing role. Also it is very important the role of the author in this story. During the whole story I can’t get rid of the feeling that the author stands beside his characters. His presence is noticeable, it is not expressed directly, but it should be experienced. The author sympathises with the protagonist, without condemning his act, understanding that as a creative person, changes are simply necessary for him.

The author knows every thought of the protagonist but doesn’t interfere with him, allowing such a way to make up a decision independently. Very interesting device is applied in the story: the end is absent. So we can’t learn precisely what will happen then, what will be the decision of the man, whether he will continue his love affair or stop it, but we can make the finish of the story ourselves. As for me, I hope that everything will be as in melodrama: the man will proudly rises, tell his girlfriend that he will be a rascal if he does such a thing with his wife, will return to his family and will never think about unfaithfulness any more. May be it is naïve but a really believe in such a course of events.

The story under the title “Can-can” was written by Arturo Vivante. Born in Rome in 1923, Arturo Vivante graduated in 1949 and practiced medicine in Rome until 1958 when he ended his medical career and moved to America to pursue a career as a professional writer.

Vivante has since been on the faculty of several American universities and is now retired and living in Wellfleet, Massachusetts.

Though Vivante writes in English and has lived in America for much of the last 35 years, his Italian heritage has an undeniable presence in his fiction. His short stories often read like reflections or memories of a distant and foreign past that a reader of Vivante cannot help but link to the life of the transplanted author himself.

The plot of the story under the discussion is quite interesting and I dare say close to our reality. A man is going to the secret meeting with the other woman, leaving his house, wife and children. Suddenly it occurs to him that he wants to stay, but the date is already arranged. So, having arrived to the summer cottage he finds himself thinking of his wife and that surprises him greatly.

The problem raised by the author is quite clear: the husband intends to have a love affair and is already unfaithful to his wife. However some feeling of upset, comprehension of the fact his wife is still a sweet cherry, not broken by a small stuff, a woman able to give him love and firmness – doesn’t let him stay calm.

Awaiting the woman at the café he hopes she wouldn’t come and he would return home easily and happily: “How strange he should be hoping for her absence.” Even spending time with the lover he misses his wife and thinks of her. How is that possible?

Let’s characterize the wife. First of all we should say she is fairly a wise woman. We see she loves her husband and wants to have a happy family as any woman does: “she felt safer with him at home, and he helped look after the children, especially the baby.”

Analysis of the story “Can-Can’’ by Arturo Vivante. (2016, Aug 19). Retrieved from https://studymoose.com/analysis-of-the-story-can-can-by-arturo-vivante-essay 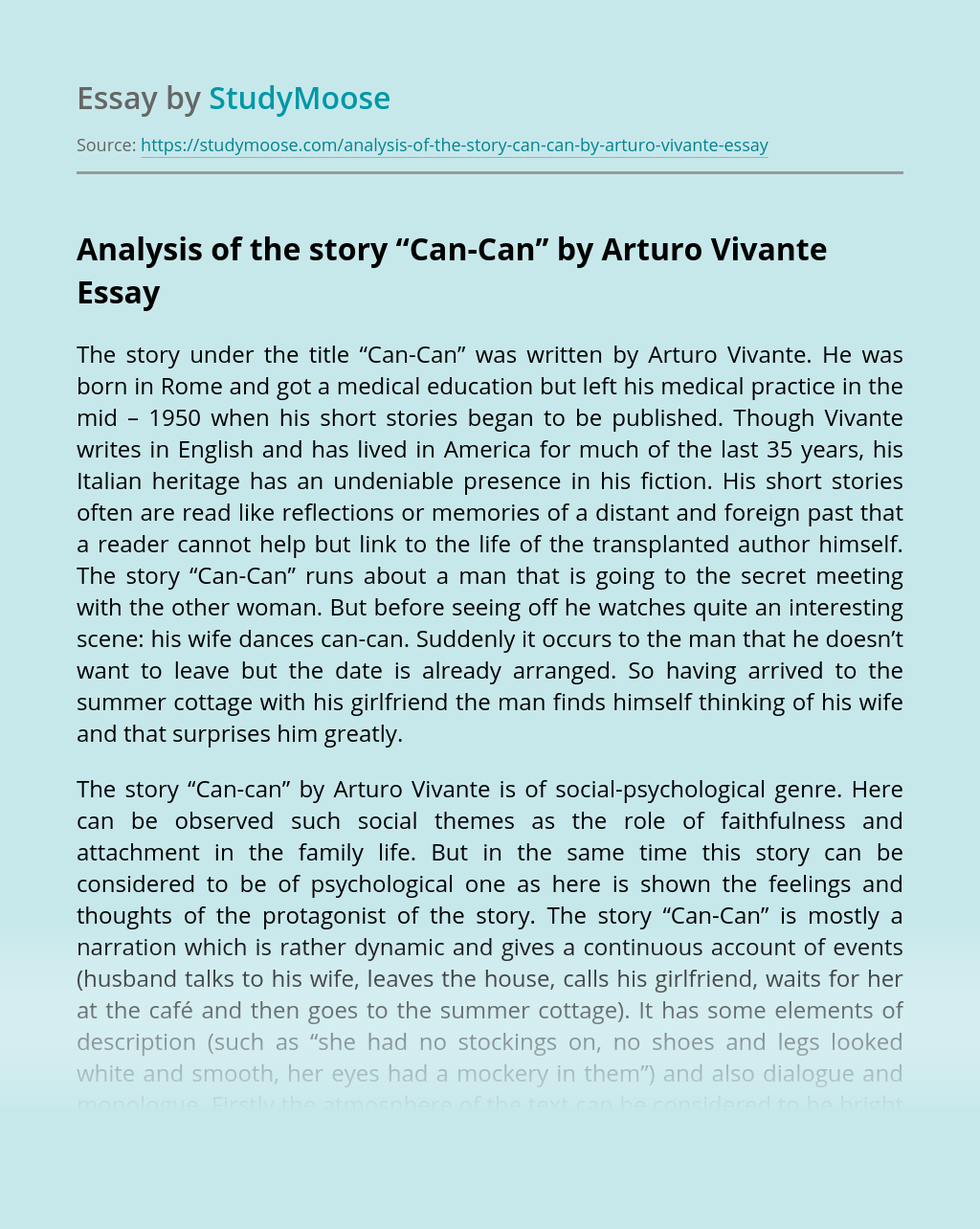