The World is a Smaller Place these Days

Good morning to the respected panel of judges, teachers and fellow competitors that is present for the Public Speaking competition today. My name is Saratha, and I’ll be representing my beloved school Dato Bentara Dalam. Public speaking is the “sine qua non“of leadership. Without it, you cannot lead. With it, you can “lead nations, raise armies, inspire victories and blow fresh courage into the hearts of men” as Adlai Stevenson eulogized Sir Winston Churchill and with this I’d like to begin.

Don't use plagiarized sources. Get your custom essay on
“ The World is a Smaller Place these Days ”
Get custom paper
NEW! smart matching with writer

This fine morning, I’d like to divulge my ideas with you on my chosen topic which is “The world is a smaller place these days.” Globalisation has played a large part in making our seemingly large world shrink. Our world is a smaller place, now as you all may know that the word “World” actually represents the whole of human civilization since the beginning of time, our experiences, history and also the human condition in general.

The human race is divided by continents, space time and economic differences that should actually enlarge our world instead of the opposite but well, “Globalisation” as I said is the drive that makes us humans break boundaries that have been set up by nature. Human population to this date stands at 7 billion and still increasing slowly but steadily and so are the technological advances of mankind. First of all, we humans have learnt to break the boundaries of being across various continents by the invention of the airplane or aeroplane.

We have the Wright Brothers to thank for that although we might be a little bit late but these aviation pioneers have managed to make the world a little smaller in size. Humans can now travel the world and stay connected to their next of kin that may be living in others parts of the world.

Then comes the inventions of other simpler but extremely useful vehicles such as motorcycles, cars, trains and watercrafts. These simple but useful machines make our lives easier and also keep us connected to people all around us without having to worry about the distance. Technology is another culprit behind the act of making the world a smaller place; this has been done by the invention of new gadgets and gizmos that enable us to reach out to one another. We have already, on many occasions, reached new heights and breakthroughs that diminish space time.

For example, the biggest breakthrough of all time by Mark Zuckerberg that has connected millions “Facebook”. The term “Facebook” might not be foreign to all of you because I’m sure each of you might have a Facebook account or have tried this amazing application. Other than Facebook, applications such as Twitter have also garnered followers around the world and the numbers don’t stop at thousands but amount to millions. Well, millions? Doesn’t that explain a lot to you? Now with billions of people connected on the same server, we could have all the friends in the world without having to even travel. Now that what I call a major breakthrough.

Then comes the epitome of inventions “The Internet” and the “WiFi”, these are two other factors that caused our world to shrink into a very small size in terms of connections. For example, Google’s latest brainchild, the “Google Street View” as of 2014 this site enables us to view places all around the world by just typing out the names of places one would like to view. The distance to the Eiffel Tower, Taj Mahal, Angkor Wat or even Mount Fuji can be measured by the number of steps you need to take to reach your electronic devices such as smartphones and laptops. We are now able to look and connect to people all around the world, with the invention of applications such as “Skype”, “Whatsapp” and “LINE” that gives us the key to communicate. In the meantime, “WiFi” acts as a bridge for us to stay connected on the Internet.

I’m sure some of you might already be on Whatsapp while I’m giving my speech, right? Well, you might be texting someone in Australia, India or even China and that’s what makes our world a smaller place. We are crossing boundaries even as I speak, being able to use technology and innovative ideas, we are able to make people connect without the hassle and troubles that may be time consuming. Everything is just a ‘Click’ away when it comes to technology. I hope I have already convinced you that our world as we know it is changing; we are entering the Golden Age where material frontiers aren’t going to stop us. Through all the examples, I believe I have given you some points to ponder and while I take my leave I hope my speech has made an impact on everyone present here today. Thank you to the respected judges, teachers and the competitors for lending your ears to listen to my humble speech.

The World is a Smaller Place these Days. (2016, Sep 22). Retrieved from https://studymoose.com/the-world-is-a-smaller-place-these-days-essay 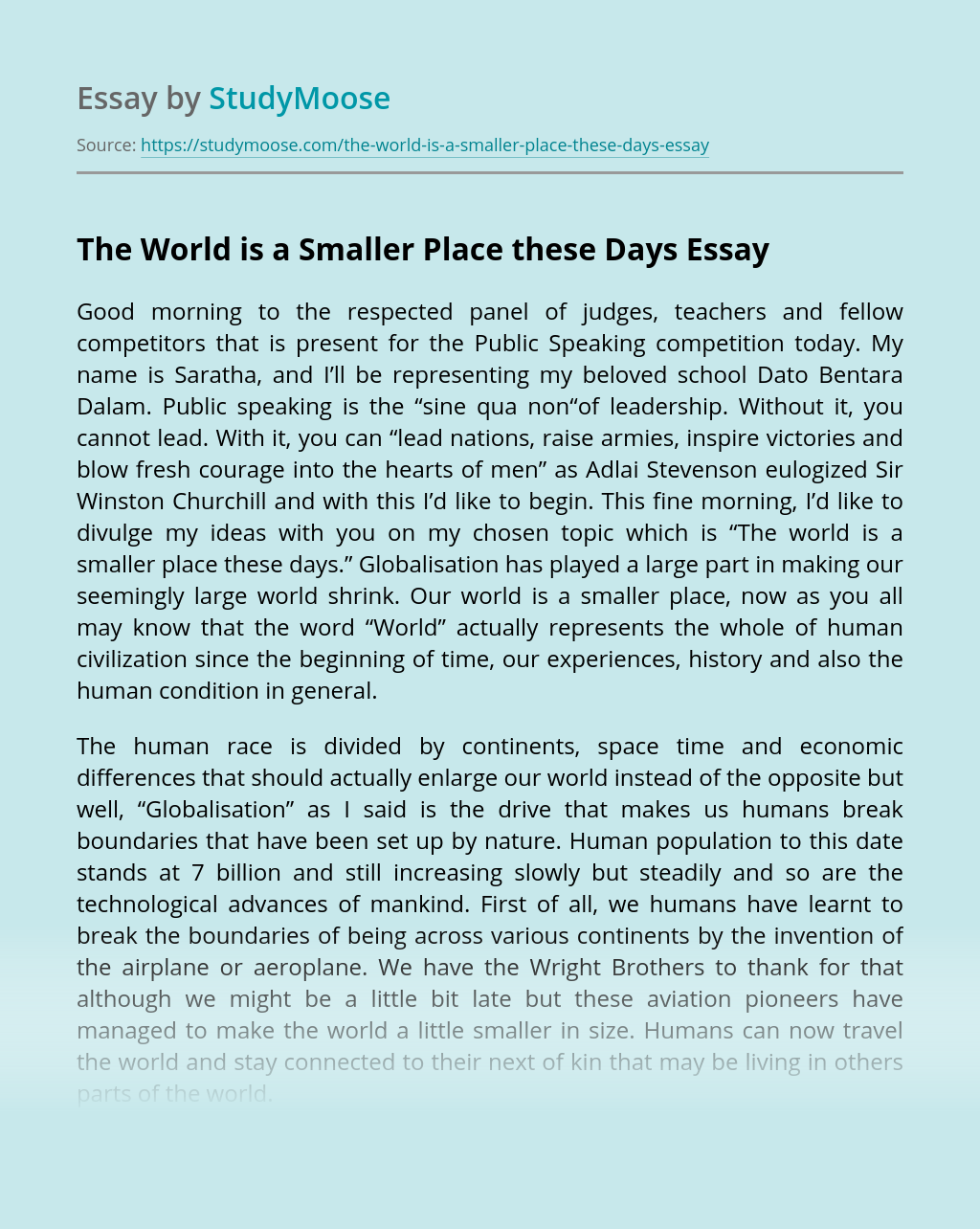