Hamlet peacefully passed away on March 18, 1585. He was born, and raised, in Denmark. He was born on March 19, 1555. Hamlet is survived by his one and only true friend Horatio. Hamlet was loved by his mother, Gertrude, a lot. Sadly She passed away minutes before he had. Hamlet had many hobbies, which included, fencing, forging letters, hanging out with his friend, and talking to ghosts. He studied in Germany. Hamlets funeral will be on March 22, 1547 at 9:00 pm.

Don't use plagiarized sources.
Get Your Custom Essay on Hamlet Obituaries Just from $13,9/Page

Ophelia passed away by drowning on March 13, 1585. She was born, and raised in Denmark. She was born on October 21, 1561. Ophelia is survived by her brother, Laertes and her close friend, Hamlet. Ophelia was loved by Polonius, Laertes and Hamlet. Sadly, her father rejected Hamlet so she could never love him. Ophelia never really had any hobbies, but she had a mad love for flowers because they always soothed her like nobody else. She also played the guitar. Ophelia’s funeral will be held on March 15, 1547 at 6:00 pm.

Claudius passed away minutes before Hamlet on March 18, 1585. He was born, and raised, in Denmark. He was born July 3, 1534. Claudius is survived by Ophelia and Gertrude. Claudius was loved by the one and only Gertrude because Hamlet knew that he killed Hamlet Sr. Claudius cheated his was to the throne. Claudius also never really had any hobbies, but what he did like when he was younger was fencing and reading, but other than that, he just took care of Denmark. Claudius’s funeral will be held on March 24, 1547 at 7:00 pm.

Gertrude had also passed away minutes before Hamlet on March 18, 1585. She was born on January 23, 1537. Gertrude was born, and raised, in Demark. Gertrude is survived by the one and only Hamlet, and also Claudius. She knows that Hamlet told her that Claudius killed Hamlet Sr. Gertrude, like Ophelia and Claudius, never really had any hobbies, except for helping manage Denmark with Claudius because he can’t do it alone. Gertrude’s funeral will be held on March 23, 1547 at 6:30 pm 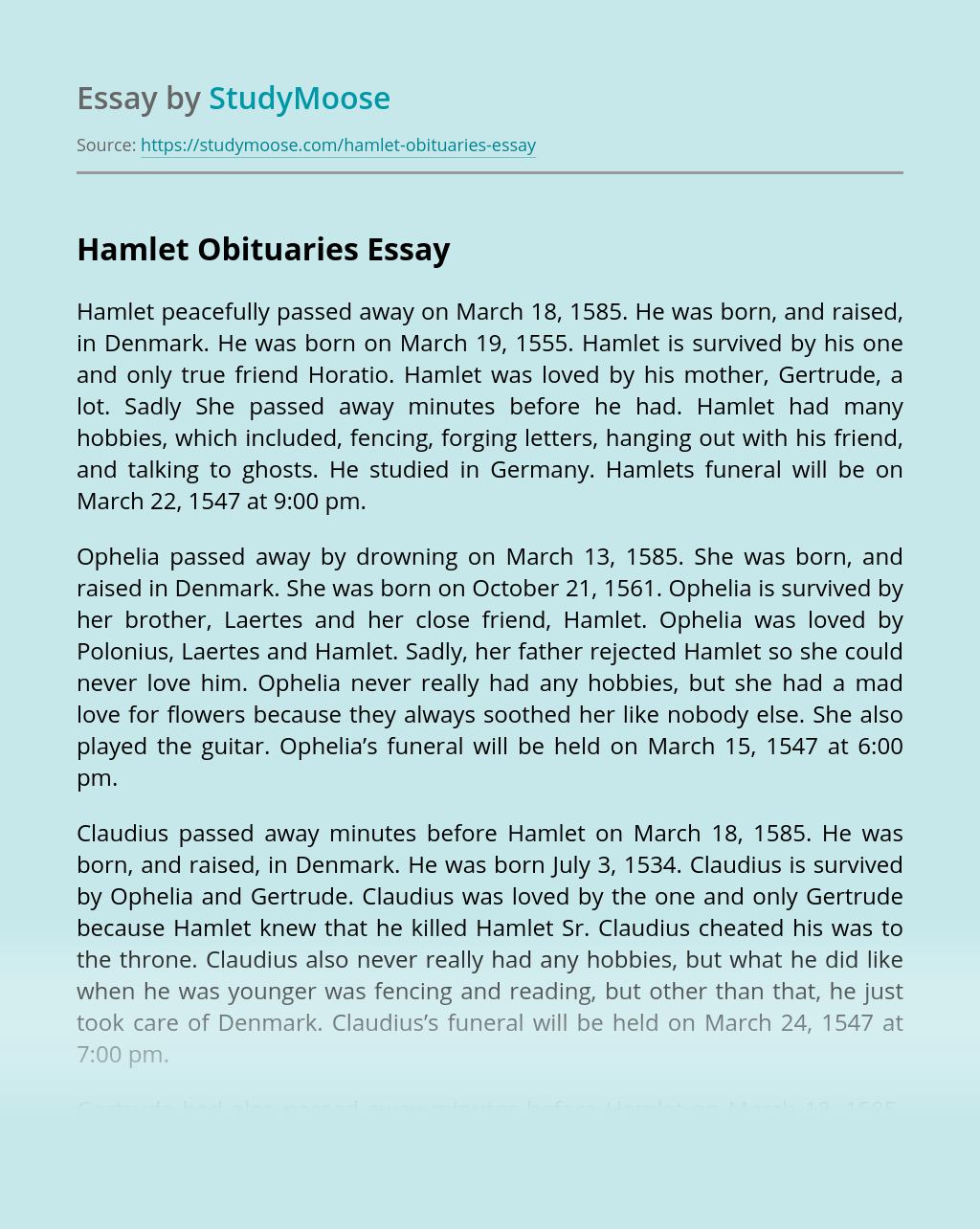 Honor in Othello and Hamlet

Rate this post Being one of the central themes in Othello and Hamlet, honor is used in very strange ways by Shakespeare. He has a way of showing how his characters can be very honorable or have a lack there of. He displays how honor is interwoven with personal integrity and how acts of attempting...

Rate this post Before Hamlet I had read three other Shakespeare plays – Romeo and Juliet, Macbeth and King Lear. Hamlet is often renowned for being one of the best if not the best of Shakespeare’s plays. At the same time it is a notoriously difficult play to study because of the complex themes and...

Get Essay
Lord Chamberlain Polonius Gets Murdered By Prince Hamlet

Rate this post Polonius, who was at one time, a useful, high ranking state officer, much respected by the late king, is murdered by Prince Hamlet. He has worked his way up through a lifetime of service to the court, culminating in duties which involved the effective management of the royal household. After the death...

Rate this post Polonius’ statement, found in Act Two, Scene Two, reflects the symmetry and order of the society he lives in. He inhabits a world of certainty and medieval convention. The play can be seen to challenge the statement, both in the action and in the characters, particularly in the character of Hamlet himself....

Analysis of the story "Shakespeare in the bush"

Rate this post In the story Shakespeare in the Bush, author Laura Bohannan has an argument with a friend about the interpretation of Shakespeare’s literature. Her friend stated that Shakespeare was “a very English poet” and that people of other cultures could certainly misunderstand his literal meanings. The author then argues that the plots and...