The first part of the theory is that of Divine Intervention – this being the easier of the two parts to explain.

This works off the idea that some manner of God or All-Powerful Force does actually exist. Divine Intervention is, therefore, the notion that this God can manipulate the world either through direct or indirect action.

Don't use plagiarized sources. Get your custom essay on
“ Hamlet: Divine Intervention and the Natural Order ”
Get custom paper
NEW! smart matching with writer

The second part of the concept is the Natural Order of the world. This can be brought down to its base form as: ‘What is supposed to happen.’ Unfortunately, it isn’t that simple. The Natural Order exists always, however is not always followed. This ‘breaking away’ from the Order is usually the result of Human Intervention, developing one of two outcomes.

These are: either the Natural Order is re-aligned, or the world remains a corrupt and terrible place until such time as the first outcome is realised. So, the world is repaired, or an unending loop of badness ensues until it is.

In the play, the Order was broken when Claudius killed King Hamlet, and from the opening lines the ‘wrongness’ that lingers in the air is noted, setting the mood for the remainder of the play: “…’tis bitter cold and I am sick at heart.

” (I,1,8-9) said Francisco as he was relieved from watch-duty. Also, in the film, these words are greatly aided in their purpose by the images of snow-covered Denmark. Another line, in the fourth act: “something is rotten in the state of Denmark” (I.4.67) reaffirms this mood and goes further to place Francisco’s sickness at heart down to a rottenness in Denmark.

Now, how the world is realigned with the Natural Order is the link back to the first part of the concept: Humans are the creatures, knowingly or unknowingly, that fix the problems that throw the world out of Order in the first place. In Hamlet, this is the case. Without Divine Intervention, however, Denmark would have remained in a state of malaise:

The Ghost, you see, gave Hamlet the one piece of information that was needed to manipulate him into action: That his father, King Hamlet, had been murdered. With this knowledge, Hamlet was able to mould his grief into anger – albeit slowly – and fulfill the will of the God by realigning the Natural Order in Denmark.

There are two parallels running: the first from King Fortinbras to Fortinbras and the second from King Hamlet to Hamlet. Both are disrupted, causing not one, but two interlocking lines of Natural Order to be upset. This is, perhaps, the reason Divine Intervention was necessary to fix it; Claudius’s murder of King Hamlet gave him power not only over Denmark, but Poland also.

As can be seen, the major character that the concept of Divine Intervention and Natural Order can be related to is, or course, Hamlet. He is the most interconnected character in the text; the manipulated being used indirectly by God, and also the one to realign the natural order. But why? This quote, from Philip Edwards, explains: “What is unendurable to heaven is not to be endured by men. Evil is not ineradicable, and heaven may appoint an agent of its justice to pluck it out – Hamlet.”

Thus, Hamlet is Divine Justice, charged by the Ghost of his Father – a messenger from God – to cleanse Denmark of evil. “Revenge his foul and unnatural murder.” (I,5,71) And he goes about it with a passion. From Philip Edward’s essay this quote is taken: “The voice he hears gives him his mission, which he rapidly expands into a cleansing of the world, a setting right of disjointed time. As the scourge and minister of heaven, he willfully seeks his own salvation by flailing others with his tongue for their moral inadequacies and redirecting their lives as he moves forward to a killing which will re-baptise the state of Denmark.” To which I add, not just one, but seven killings.

The realignment of the Natural Order is realised in the final scene in the final act, just before Hamlet’s death: “The rest is silence.” (V,2) As there is no definite in-text acknowledgement that the Natural Order was upset, conclusions can be drawn from other lines, the descriptor of rottenness in Demark being one of them. And so it is that, although there is no line saying “The world is now in alignment with the Natural Order”, we can say “The rest is silence” is the realisation that the world is right again. There is no more chaos, no trouble, just peace – usually equated with silence and calm.

The major impact of the Divine Intervention and Natural Order theory is upon the audience’s perception of the play after its conclusion. The dominant view taken is that Hamlet, although achieving his goal of revenge, caused a chaotic mess of death that was, in itself, meaningless. This view lends itself to a play-given moral of ‘revenge is bad’ or some other similarly droll statement of absolutes.

When applying the text to the Natural Order theory, the deaths of the six apparently innocent characters – Gertrude, Polonius, Ophelia, Laertes, Rosencrantz and Gildenstern – can be justified. All were wronged by Claudius’s misdeed, all were in the wrong in some part, and thus, all had been moved out of the Natural Order – even if it was without choice.

Their deaths are integral to the realignment of the Order; if they remain, the corruption lingers also. In death, they are no longer tools of Claudius – who is the cause of the disruption – and do not obstruct Hamlet’s duty as divine justice.

Rather than a purposeless bloodbath, the deaths of the six were actually a necessity to achieving peace and new Order:

Gertrude had married her brother-in-law, and it is quite likely had been seeing him before the death of King Hamlet. Incest, in the time of Hamlet (and, of course, in the current time) was looked upon with great distaste and marrying one’s brother-in-law was seen as incest – unlike now.

Polonius had spied on Hamlet as well as having plotted with Claudius to partake in many misdeeds. His faults are, perhaps, the most blatant.

Laertes, after the death of his father, consents to follow the whim of Claudius and poison Hamlet. A big mistake, for he ends up taking the life of another human – a cardinal sin.

Lastly, Ophelia; although there is no hard evidence in the play, she may have slept with Hamlet. If this is the case, and sex before marriage is her “wrong”, then Shakespeare’s search for evil – and successive eradication of it – was very thorough.

As well as altering the perception of the audience, the play itself can be viewed in a new light: Shakespeare’s Hamlet had yet another underlying meaning. Along with concepts of revenge, ambition, love, marriage, gender, class structure, morality, betrayal and deceit, appearances and reality and madness, the idea that evil does not go unpunished can be expounded to include God as a punisher, hunting down every little transgression and demanding payment in triplicate; payable with ones eternal soul.

Finally, “what about Hamlet’s death?” I hear you ask. Charged with the responsibility of divine justice, it would seem wrong that he should die, right? His death was one big accident, occurring because Laertes was persuaded by Claudius to poison the sword he used to fight Hamlet.

No. Such a simple and… slack answer does not support the theory of Divine Intervention and Natural Order. Hamlet’s death was also necessary to fixing a jaded world.

As can be seen from the flowchart, King Fortinbras’ power passed to King Hamlet with his death – not to Fortinbras as must be assumed it would have.
When Claudius gained power, not one, but two Kings had been wronged – their command stolen by evil.

Hamlet dying, after killing Claudius and retrieving the power of the Kings, was the final piece in the puzzle. Control passed to Fortinbras – the only major character not to have committed acts of… poor judgement (to put it lightly), and the Natural Order was truly repaired. Both Denmark and Poland had a ruler of integrity and the eternal loop of badness could be overcome, allowing the world to move into new times of industry and wonder. 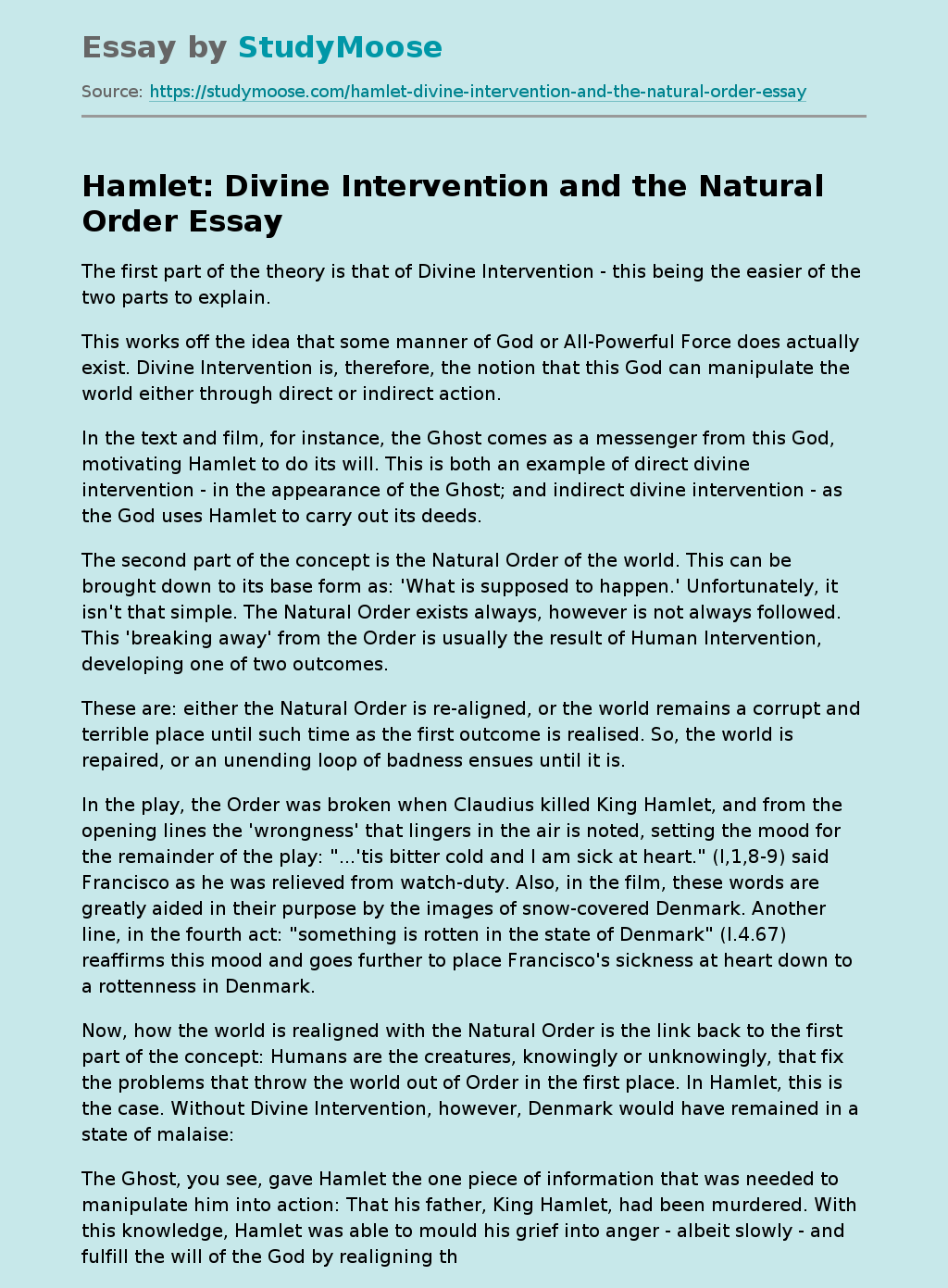