In environmental cases, a policy framework is sometimes more effective when there is less government intervention. As the level of government intervention diminishes, this allows more flexibility for corporations to achieve efficiency. Furthermore the traditional command and control approach has proven to be costly, bureaucratic and often inefficient. It is important to address the fact that there are numerous benefits that can be achieved for both policy makers and industries, if a policy framework is based on market forces. However it is important that there is a need for some government intervention, but should be as minimal as possible.

Don't use plagiarized sources. Get your custom essay on
“ Role of Government Intervention in Environmental Issues ”
Get custom paper
NEW! smart matching with writer

I have chosen to examine the article from the New York Times entitled RU.S. Seeking Options of Pollution RulesS. Although pollution is detrimental to our environment, you have to take into account that it is almost impossible to entirely prevent pollution. This is scientifically impossible and it would have severely negative economic impact on the industries. So the core issue becomes the fact no matter what, there will always be pollution, as long as these industries exist.

So we should focus on how we can minimize this and yet at the same time have an efficient market system? Furthermore, we should also focus on how we can accomplish this so that sustainable growth and development can take place. So there is definitely a need for some form of government intervention to enforce and monitor this. Reason being that there is always an element of equality that has to be enforced, when dealing with cases such as this.

For instance, larger corporations may have an advantage over smaller corporation, since they have stronger influence on politicians and lobbyists. So the governmentUs role should be to ensure that all industries (regardless size and/or power) have equal opportunities to benefit from this type of approach. In another words, the government should simply be a RwatchdogS. Government should monitor so that the distribution and transaction of the permits are done in an appropriate manner. The case of Minnesota Mining & Manufacturing Corporation is a classic example of tradable permit approach.

Under this model corporations are able to buy, sell and trade permits that legally allows emission. Many economists have favored this approach because this also provides incentives for technical improvement. So the aggregate effect would be that most industries would try to maximize their profits by trying to come up with new techniques to reduce the level of emission. This in turn would allow them to reduce the cost that they would have to pay from polluting. Norm Miller also endorses this approach by stating that Rperformance-based approaches are more efficient, both for industry and for governmentS. Allowing a company to devise and manage their own pollution control plan is another effective (and Rde-regulativeS) approach. In the article, this was exemplified in an Arizona based company called Intel. Individual companies such as Intel knows what is best for the company. This means that each individual companies know what the best equipment is and what the best procedures are to achieve established standards. Rather than having the government telling them what to do, the people at Intel were able to devise their own plan. This saved them a great amount of time with out the usual cumbersome, bureaucratic procedures.

The Intel company, in this case, bought the effluent from the cityUs waste water treatment plan. This allows corporations to work more closely with the local communities. Usually, the result is that both parties would benefit and even achieve a common goal. There are, however, potential problems that may occur from this. Although we can presume that market forces will allow everything to work itself out, it may still promote degradation. Reason being that, under this model there is still a notion of Ryou can pollute as long as you can pay for itS. So if a great number of corporations are financially able to pay for their level of emission, the aggregate effect on our environment would be devastating. Under this model, it is also difficult to penalize the polluters. Where as under the command and control approach, severe fine or even imprisonment can be imposed to prevent pollution. There is also a possibility that this may lead to individualistic attitude. In a competitive market, everybody (or every corporation) tries to maximize their gain by acting in an individualistic manner. Individualistic type of behavior has been known to lead to greater level of environmental degradation.

Market based approach is definitely an economically liberal (and also RReagan-esqueS) approach, since there is the Rhands-offS notion. But if the initial framework is implemented in an appropriate manner, this can turn out to be very flexible, user friendly and environmentally friendly approach. In my opinion, government role should simply be initiating, implementing and monitoring with minimum regulatory intervention. However, government should set forth some sort of environmental goal before implementing a regulation. If this prevails, it will allow growth in a sustainable manner. Paper #2: Global Economy and the Environment As the global economy gets integrated, national or local corporations will gradually transform in to a multinational corporation (MNC). When this type of development occurs, the host countries are usually the ones that become the immediate stake holders. This is because when a MNC sets its foot into a host country, there are economic, political, social and environmental impacts that result from their corporate actions. In many cases, it is certainly possible that it can end up in a win-win situation, if the host country and the MNCUs both work mutually.

However there have been unfortunate examples, where this has not been the case. In general, international agreements have its advantages, due to the fact that we can harmonize international standards. Therefore environmental concern is one of the key issues that the policy makers and MNCUs should set a high priority on. This is because growth and development is strongly correlated with environmental degradation. Furthermore, it is fair to say that the MNCUs are more likely to have a more harmful environmental impact from growth and development, as opposed to the local corporations. This is because MNCUs may not be as knowledgeable as local corporations in resource utilization and land management. This also refers to the notion of Rthe locals know their land better than anybody elseS. The tropical rain forest of Brazil is a good example of this. The RindigenousS or the local people have a good understanding of how to extract and utilize its resources in a very sustainable manner. However when a multinational timber company comes into Brazil, result of their actions will probably be more harmful, due to the fact that they are not complying to the RtraditionalS methods.

Another important aspect is the fact that in any international trade agreement, a MNC is most likely going to shift their production to a lesser developed country. This is because LDCUs are a good target for cheap labor and low start-up costs. In Robert PastorUs essay, he mentions the term maquiladoras; Rcheaper labor that allows them (Mexicans) to assemble parts, import from the U.S. and then reexport the assembled productsS. In places such as the maquiladoras, safety standards are not as rigid and this puts the local workers in a serious health risk. The Rblack lungS case is an example where miners in Latin America contracted respiratory diseases from working at unsafely regulated coal mines. Since it was in a lesser developed country, occupational health standards were lower than the usual. The Union Carbide incident from Bhopal, India is another example, where the explosion took place due to lack of safety and precautionary measures. Many experts have commented that the Union Carbide incident could have been completely avoided, if the plant was located elsewhere, in a more developed country, where they have more strict standards. So there is a need for universal standard on these types of issues.

Unless this is achieved, the LDCUs would be placed in a vulnerable situations as more and more MNCUs will take advantage of this. When MNCUs come into a host country, this increases their revenue and their GDP. However this does not necessarily mean that everyone benefits from it. This is especially the case in the most third world countries. The benefits usually go to the elites or sometimes to the ones living a more urbanized areas. This disrupts the level of equality as the few rich individuals get richer and a great number of poverty stricken individuals get poorer. This also increases political corruption. A good example of this is the case in Brazil with the discovery of oil in the late 1960Us. The level of corruption resulted in an unprecedented amount of national debt, leaving them worse off then before. In addition the Brazil suffered a great deal of environmental and resource degradation as a result of unsound environmental activities from the MNCUs . As Walter Reid puts it, there a need for Rgovernments to have a responsibility to invest a share of the national benefits in rural developmentS. Most free trades also make it more difficult to push a political agenda.

Major power such as the U.S. use economic sanctions on other countries to enforce their political agenda. Not too long ago, the French government was engaged in funding for nuclear testing. Most U.N. officials as well as the U.S. were outraged by the fact that France was not complying with the international arms agreement. As you know nuclear testing not only encourages the international arms race, it also has a detrimental effect on the global environment. However, because U.S. was engaged in a heavy free trade with France, this made it more difficult to impose an economic sanction. So there is also a need for more serious political considerations, when being engaged in a free trade. In this case, the Department of Commerce should have carefully reexamined the political and military criteria, before a high level of free trade took place between the U.S and France.

But as the world becomes more integrated socially and economically, the idea of expanding the international trade will have numerous benefits, if they are carried out in an RappropriateS manner. After all, free trade promotes transfer of living in LDCUs as well as improving economic efficiency. This also allows increase in efficient use of natural resource, which can have numerous environmental benefits. NAFTA is a good example of an environmental success where the U.S. EPA and MexicoUs SEDESOL worked closely together to achieve common environmental goals. Free trades can serve as an instrument that can increase international cooperation. However it can have an enormous unintended consequences. Therefore there is a need for more scrutiny in the decision making process. 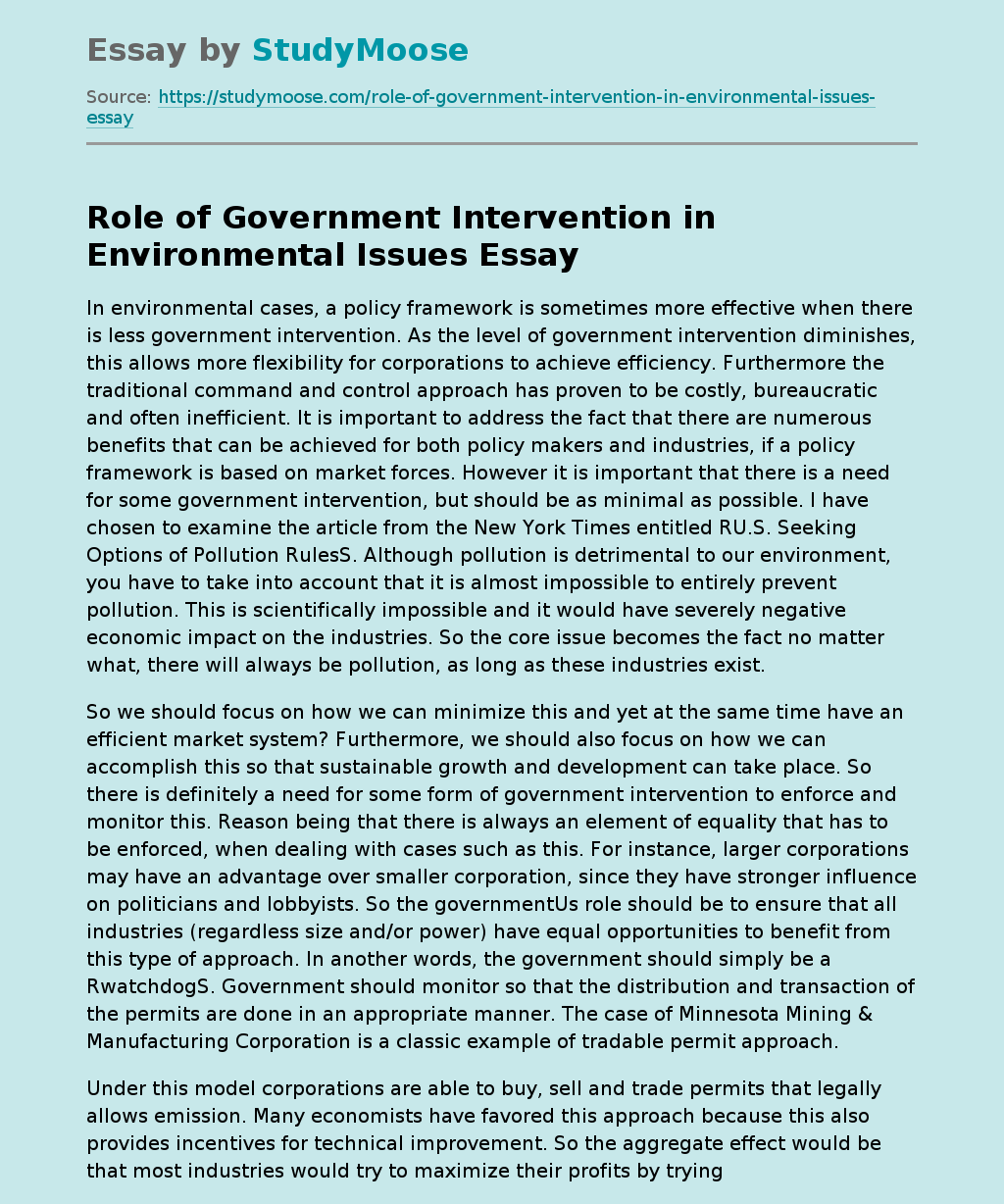