Frankenstein: The Danger of Knowledge

“It was on a dreary night of November, that I beheld the accomplishment of my toils. With an anxiety that almost amounted to agony, I collected the instruments of life around me, that I might infuse a spark of being in to the lifeleless thing that lay at my feet. It was already one in the morning; the rain pattered dismally against the panes, and my candle was nearly burnt out, when, by the glimmer of the half-extinguished light, I saw the dull yellow eye of the creature open; it breathed hard, and a convulsive motion agitated its limbs” (Shelley, 34).

Don't use plagiarized sources. Get your custom essay on
“ Frankenstein: The Danger of Knowledge ”
Get custom paper
NEW! smart matching with writer

Thus begins the horror in Mary Shelley’s well-known gothic, romantic fiction, Frankenstein. This literary work, published in 1818, tells the story of a young scientist who comes upon the secrets to create life. The novel begins with the correspondence of letters between Captain Robert Walton, a young English explorer in pursuit of discovering the Northwest Passage, to his sister Margaret Saville.

The first few letters in the novel recount to Margaret the progress of Walton’s voyage.

Upon reaching a plot of impassable ice, Walton encounters Victor Frankenstein upon a slab of ice, and brings him aboard the ship. As Walton nurses the dreadfully weakened Frankenstein back to help, his vigor for seeking success and the unknown leads Frankenstein to relate the story that led to his misfortune. Frankenstein begins relating his story to Walton. He tells Walton about his family and childhood in Geneva. Frankenstein recounts of his love for science and seeking out the causes of things since he was very young.

Upon coming upon the works of Cornelius Agrippa, Frankenstein is enraptured with philosophy and the thought of creating life. This love led Frankenstein to attend the University of Ingolstadt, where he studied chemistry and natural philosophy. As his time passed there, Frankenstein became increasingly obsessed with discovering the secret of life. This led to a continual pouring and dedication to that one area, until he at last discovered it. Upon discovering the secret of life, Frankenstein poured himself into forming a human from old, decaying body parts and brings to life his creation.

Though he initially began praising his creation, his joy soon turns to horror at realizing the grotesque, appalling being he created. Frankenstein flees from the creature, and returns to find it gone. As the novel progresses, each of Frankenstein’s loved ones is killed, and he vows himself to seek out the creature and destroy it. The novel shares the story of the incidents that led up to the creation of the monster and the sad destruction of the innocent affected by one man’s unharnessed passion to seek knowledge no matter the cost. Throughout the novel, Shelley portrays the theme of the danger of knowledge in the characters of Walton, Frankenstein, and the creature. Mankind, since its beginning, has always had a great thirst and craving for knowledge. In Frankenstein, Shelley seems to question the wisdom in such a pursuit and sends a precautionary warning to those who read it. This thirst for knowledge, though it can be a blessing and beneficial, can become a dangerous endeavor.

The first character that Shelley introduces that shares this passion for knowledge and the unknown is Robert Walton. At the beginning of the story, Walton begins by writing to his sister and informs her of his yearning to seek out the unknown. Walton expressed to his sister how she cannot imagine the benefit that he would, “confer on all mankind to the last generation, by discovering a passage near the pole to those countries, to reach which at present so many months are requisite; or by ascertaining the secret of the magnet, which, if at all possible, can only be effected by an undertaking such as mine” (Shelley, 20). This quote exemplifies from Walton’s letter how passionately he sought out after knowledge. After Walton finds Frankenstein and brings him aboard, he explains his pursuit to Frankenstein. Walton expresses that he would sacrifice, “my fortune, my existence, my every hope, to the furtherance of my enterprise.

One man’s life or death were but a small price to pay for the acquirement of the knowledge which I sought for the dominion I should acquire and transmit over the elemental foes of our race” (Shelley, 11). This quote foreshadows the dangerous path Walton is treading upon. Once compared to the story of Frankenstein, the reader can understand that the dangerous road Walton was on, could ultimately lead to a similar result as Frankenstein’s. Both men fervently sought knowledge without mind of the end result. Walton and Frankenstein shared a concern only for the present and the fame and knowledge that could be attained now, without considering the possible deadly fruit of their labor. Thankfully, Walton heeded the advice of Frankenstein, and was spared a possible dreadful ending. Unfortunately, Frankenstein had not been given the same warning in advance, and was forced to reap the fruit of his pursuit. The second main character that Shelley introduces that contains a passion for knowledge and the unknown is Victor Frankenstein. When Frankenstein is found by Walton, he relates his story to him after perceiving that Walton walks on a similar path as he once did.

He expresses his horror in the thought when he cried out, “Unhappy man! Do you share my madness? Have you drunk also of the intoxicating draught? Hear me,- let me reveal my tale, and you will dash the cup from your lips!” (Shelley, 12). Frankenstein wished to save Walton the agony and pain from walking along the stinging road that he had traveled upon. Frankenstein soon begins his narrative of his story and related to Walton how his thirst for knowledge and the unknown had begun while he was yet a young child. He tells of how he became obsessed with natural philosophy and chemistry, and the elixir of life upon entering the University of Ingolstadt. As he knowledge and intelligence grew, so his infatuation with the human frame and discovering the secret to create life. At last, Frankenstein came upon the secret that led him to begin the construction of a creation- a being that he could breathe life into. As he worked, he was blinded to the thought of what may result of this creation, and he worked continually. Not for a moment did Frankenstein step back to rationalize what he was creating.

He was blinded to all except the thought of success and creating life. As a result, Victor’s creation was formed. As the monster came to life, only then did Victor understand what he created. He abhorred his own creation, and could not lay eyes on it for fear and horror. Frankenstein’s uncontained ideas and thirsts caused him severe pain as his creation destroyed all he treasured. The third and final example in Shelley’s novel that displayed a desire for knowledge was the Frankenstein’s creation- the monster. When the monster was first created, he was as a newborn babe. Unable to distinguish his surroundings and completely defenseless, he wandered around searching for comfort. Like a child, he grew in knowledge as he roamed, and soon was able to distinguish between simple items such as the sun, moon, berries and fire. As the creature continues to learn and fend for himself, he came upon the hovel of the DeLacey family, where he remained for quite some time, observing the family. The monster becomes fascinated by the family, and begins to learn from their example.

As he learns, he strived to be able to communicate with them and to share a relationship with someone, such as they had. The more the monster observed the family, the more he longed to be accepted and human. When Safie joins the DeLacey family, they begin teaching her how to read and speak, and so also do the lessons of the monster begin. As he grew in knowledge, his eyes were opened to understand more and to believe that if the humans were rationalized with, they would come to love him once they realized the kind heart inside of him. Contrary to what he hoped, the monster was rejected by the DeLacey Family, and sought after the creator who brought him into his miserable existence. The monster had sought for the knowledge of love and acceptance, but never found it. He himself states that though he destroyed Frankenstein’s dreams, “I did not satisfy my own desires. They were for ever ardent and craving; still I desired love and fellowship, and I was still spurned” (Shelley, 165). The monster had sought for the knowledge of love and acceptance by perceiving humans, but realized that he alone would always be separate from that gift.

This knowledge and revelation led to his anger and hatred towards mankind and his creator, who also abhorred him. There was no one left to love him, and for that he swore anger and vengeance on his creator who had created him and left him in that state. As the monster grew in knowledge, he grew in bitterness and hatred knowing that all mankind had to offer was exclusively kept from him. His anger came from his rejection and dissatisfaction of knowing that he alone would never be able to experience love, kindness, and sympathy from another fellow human being for as long as he lived. Mary Shelley sent a very clear message through her novel, Frankenstein. She warned that those who seek knowledge and secrets might attain them, but lose everything they treasure and care for in the process. Just as in the case with Victor Frankenstein, sometimes unharnessed thirst for knowledge can lead to a devastating end that not only hurts the person seeking knowledge, but all those around them.

Shelley sent a message that, like Walton, one must take the time to sit and consider the cost of their enterprise before it is too late. If they are blinded by their goal, they will not see the cost of their search until they cannot turn back. Shelley’s message was not only for those in the 1800’s, but can be said for those in the twenty-first century. In a time when new discoveries are being made every day, is anyone taking into account the detrimental costs that it may have on those in society? Advancements are being made every day, but so many of them have been used to harm society, more than advance it. Shelley’s warning is one that needs to be taken into consideration even today. If not, who knows how many monsters and creations will be released into this world.

Frankenstein: The Danger of Knowledge. (2016, Jun 06). Retrieved from https://studymoose.com/frankenstein-the-danger-of-knowledge-essay 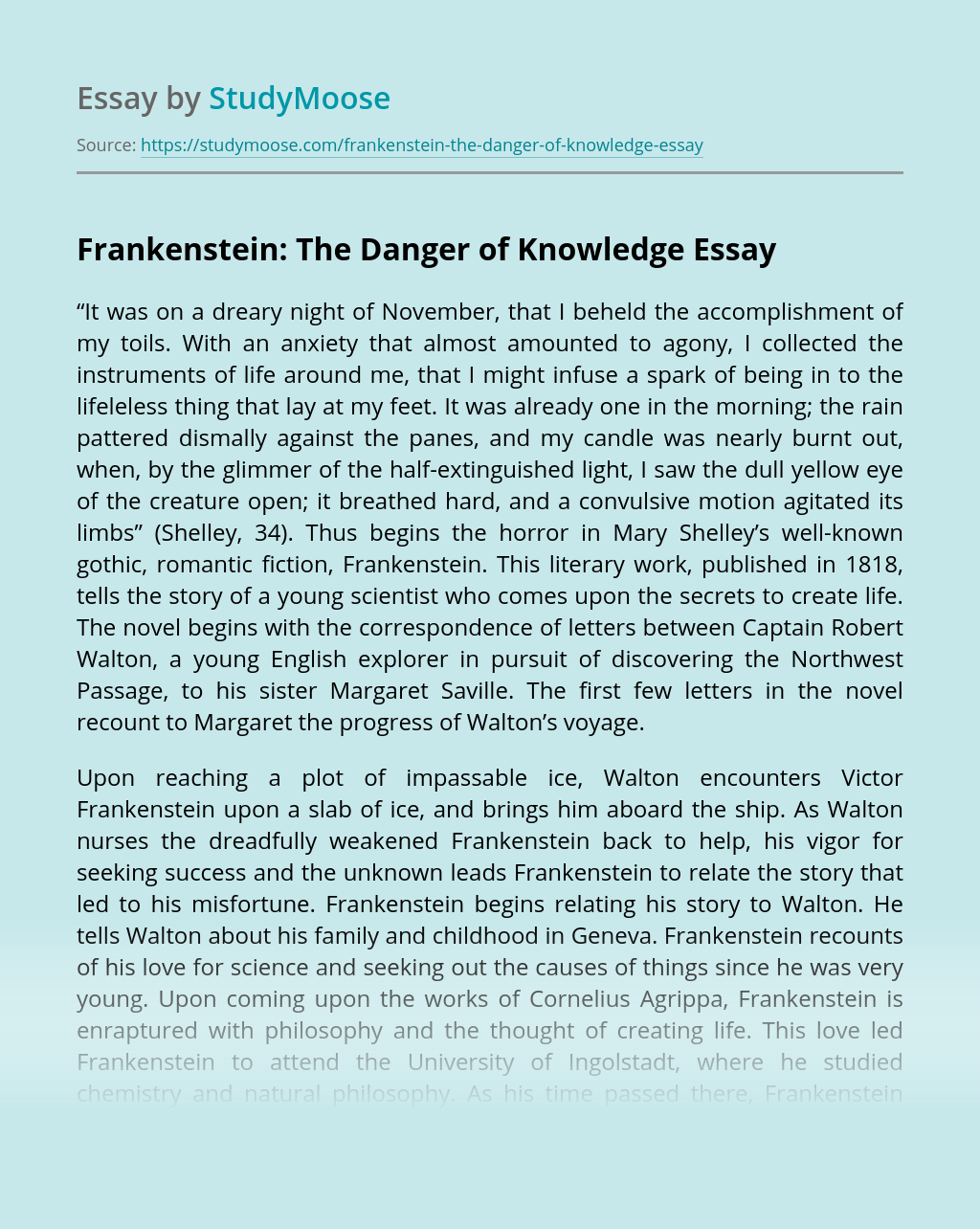