Danger of a Single Story

In her inspirational speech on the TED television series, Chimamanda Adichie argues that single stories of specific races or regions often create misconceptions of their true natures. Adichie, born and raised in colonial Nigeria, uses previous life experiences to support her claims regarding false stereotypes, most evidently during her childhood and her first visit to the USA.

Living under a colonial environment, Adichie was constantly being exposed to foreign ways of life; she had a decent education, read children books about men drinking ginger beer, and was taught to be thankful for the opportunities she was gifted.

Turn in your highest-quality paper
Get a qualified writer to help you with
“ Danger of a Single Story ”
Get high-quality paper
NEW! AI matching with writers

However, not until later in her life did Adichie realize that these influences were incomplete and untrue representations of Western life. This helps to demonstrate “how impressionable and vulnerable we are in the face of a story, particularly as children,” and how we can not truly know the truth until it has been concretely revealed to us.

Furthermore, when Adieche moved into her college dorm with a white roommate, she was automatically pitied.

Her roommate’s “single story of [Africa was] catastrophe,” and not until they interacted further did it occur to her that she was no different from anyone else. These are just two examples of common stereotypes; innumerable others exist around the world, one of which is that of Muslims, the prominent occupation of the Arab region.

Unfortunately, there are groups who claim to be ‘Muslims’ that commit despicable acts globally, such as the plane attacks of 9/11, the Boston Marathon bombings earlier this year, and the perpetuate persecution of refugees in Central Asia (Afghanistan, Uzbekistan, etc.

), that set a bad image upon Islam. Nevertheless, the media disregards the majority of the positive stories of the Arab region, therefore exclusively establishing Muslims as terrorists inspired by spite and ill-will. The single story of Muslims, as is the stereotype of Africans and Westerners, creates a false and incomplete depiction of their authentic essences.

Danger of a Single Story. (2016, Jul 15). Retrieved from http://studymoose.com/danger-of-a-single-story-essay 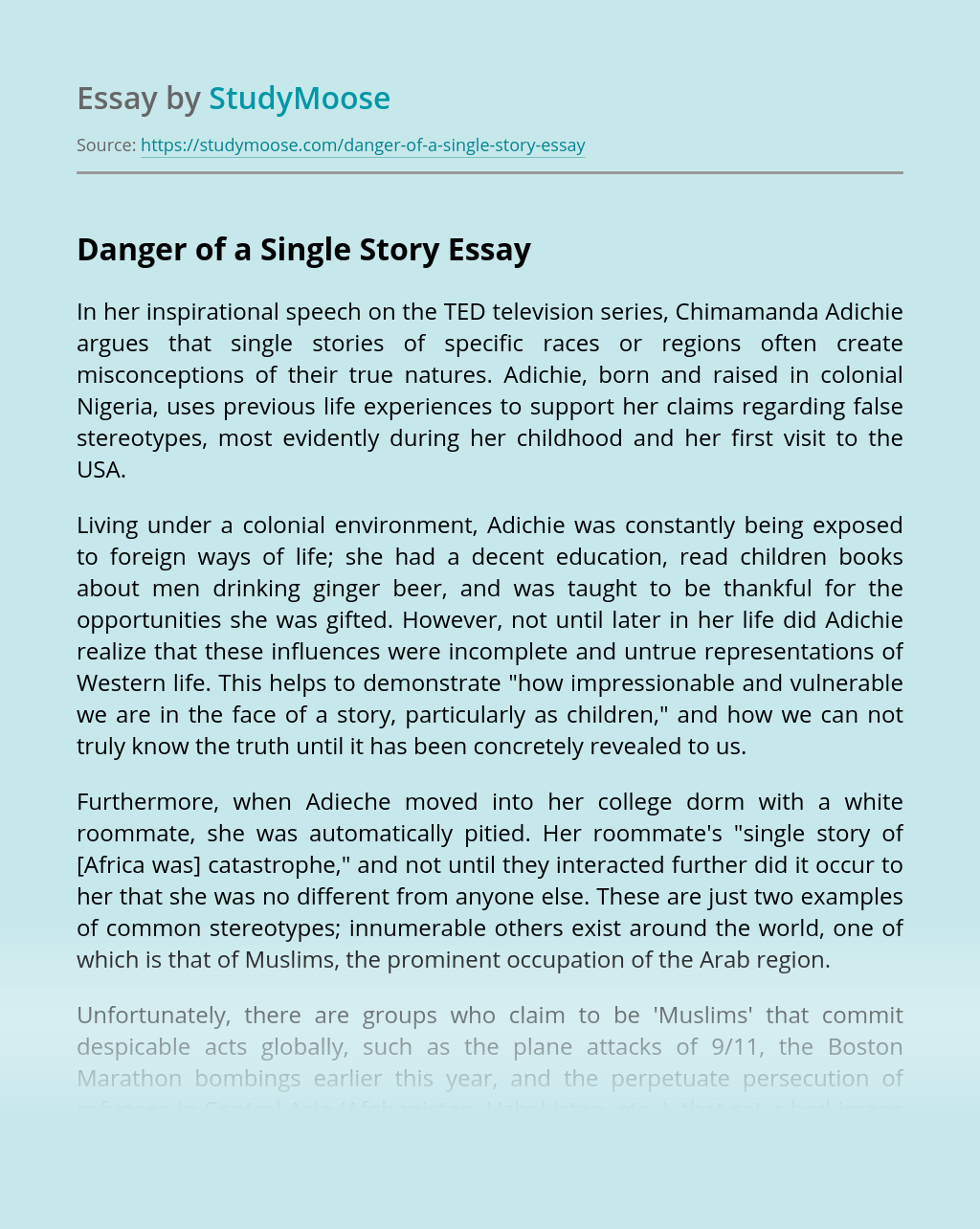 Turn in your highest-quality paper
Get a qualified writer to help you with
“ Danger of a Single Story ”
Get high-quality paper
Helping students since 2015
Stay Safe, Stay Original