The Danger of Having Guns on College Campuses

Policies removing restrictions on gun control laws have changed over the last few decades. The changes are based on assumptions and claims about civilian gun use in populated places. University and colleges have been able to prohibit people from carrying concealed carry on campuses. Now some states have laws that allow individuals who are legally authorized to carry guns to carry them on campuses. The majority of states leave the decision to allow concealed carry guns on campuses up to each school.

Don't use plagiarized sources. Get your custom essay on
“ The Danger of Having Guns on College Campuses ”
Get custom paper
NEW! smart matching with writer

Carrying concealed firearms on college and university campuses should not be permitted because it undermines the safety of the students and faculty.

The rise in shootings on college campuses has opened a new front on the gun debate. After a student at Virginia Tech opened fire on Monday, April 16, 2007 killing thirty-two students and wounding many others (Beck), many students and families want to regulate gun availability on campuses by having a concealed carry permit. They argue that guns on campuses will make students safer, but because the Campus-Carry Movement is to some extent new, there has not been much evaluation of its impact on gun violence.

Advocates for allowing firearms on campuses believe it will decrease mass shootings. These people also blame mass shooting on “gun-free zones” and argue arming more individuals can stop mass shootings. However, eighty- four percent of high fatality mass shootings happened in areas where there was no law prohibiting firearms. While twelve percent of all mass shooting involving six or more people between 1966 and 2016 have occurred in true “gun free zones”, people who are untrained in using a firearm cannot be expected to protect themselves or people around them (Beck).

The National Rifle Association (NRA) has pushed for laws on gun rights and laws that force universities and colleges to allow guns on campuses. The NRA has proposed, campaigns and lobbied for the government to change laws on guns. For example, after the Sandy Hook Elementary shooting in 2013. “President Barack Obama supported reinstating the ban on assault weapons, and majority of Americans favored stricter gun control after 20 children and six adults were killed by a gunman using a semiautomatic weapon. The NRA started a ‘Stop the Gun Ban’ campaign even before the bill was introduced. It failed in the Senate, 60 to 40” (Gerhart). Even before the bill was introduced to Congress the NRA influenced the Senate to vote against the bill. Many States have rejected the NRA’s agenda, despite the push to allow guns on campuses (“Guns on Campus”).

Advocates against guns being on campuses believe that guns will increase shootings in general. A study done by John Hopkins Bloomberg School of Public Health reviews the evidence around the relationship between civilian gun carrying and violent crimes. As well as mass shootings and other factors that are unique to public safety on college campuses. The study also looked at the human brain. From adolescence to adulthood the brain goes through tremendous change and development in the prefrontal cortex (PFC). Areas of the PFC are in charge of self-control, impulse control, and judgement. These skills are crucial for safe use of firearms. Risky decision making in adolescence and young adults comes from both the frontal and limbic balance in the brain. Changes between the connection of the PFC and limbic affect the emotional and behavioral regulation. The limbic areas play a key role in the systems that support emotions, reward systems, and drives. This may also help explain why adolescent behavior is biased toward motivation rather than inhibition (Webster). Because the PFC is one of the last parts of the brain to fully develop, it would be dangerous to put guns in the hands of someone who is still developing these skills. On top of the fact that the brain is still developing, the use of illegal drugs and alcohol that occur by some students increase risk of adding a deadly weapon to “the mix.” This is likely to lead to occurrences of accidental shootings and self-injury.

The Second Amendment has become a huge part of both sides of the gun control debate. Both sides have cited what they feel the Founding Fathers meant when they created and wrote the Second Amendment. The purpose of the Second Amendment was to provide the constitutional framework for America’s gun laws. “A well regulated Militia, being necessary to the security of a free state, the right of the people to keep and bear arms, shall not be infringed” (Hicks). The Founding Fathers intended that the Amendment’s primary justification was to prevent the United States from needing a standing army. Also, the authors of the Bill of Rights were not concerned with an individual right to bear arms (Shusterman). People who are pro- gun use the second Amendment as textual evidence to claim that individuals have a right to own guns. “Before the 2008 Supreme Court case District of Columbia vs. Heller, courts ruled that the right of an individual citizen to bear arms existed only within the context of participation in the militia. In Heller, the Supreme Court overturned that precedent, delivering gun rights advocates their biggest legal victory” (Shusterman). After the decision of the Supreme Court, “the second Amendment meant individuals had an inherent right to own guns for lawful purposes” (Elving).

Professors and administrators should not be allowed to carry a gun on campuses because they are not trained for how to respond to active shooting situations. “A concealed carry class is a permitting class, not a training class. A concealed carry class gives you as much training for the realities of carrying a concealed weapon as your driving test gave you about dealing with your morning commute” (Creighton).

Officer Jesus Villahermosa, is a S.W.A.T. officer in Washington State and is the founder of Crisis Reality Training. Officer Villahermosa has responded first-hand to gun-related violence in schools. In an essay published in the Chronicle of Higher Education, he concluded: “I have been a deputy sheriff for more than 26 years and was the first certified master defensive-tactics instructor for law-enforcement personnel in the state of Washington. In addition, I have been a firearms instructor and for several decades have served on my county sheriff’s SWAT team, where I am now point man on the entry team. Given my extensive experience dealing with violence in the workplace and at schools and colleges, I do not think professors and administrators, let alone students, should carry guns… Adding a weapon … into the mix can quickly turn a constructive meeting into one filled with fear and intimidation” (Dickerson). In an article published by “The Chronicle of Higher Education” about the effect of guns on campuses and the freedom of speech, Jennifer Sinor tells the story of feminists and media critic Anita Sarkeesian who was scheduled to speak at the Utah State University, but after the faculty received threats against the school if Sarkeesian was allowed to speak there would be a school shooting.

Administrators and public officials met with Sarkeesian and made plans to increase security, however, once Sarkeesian learned Utah State allowed guns on campus and the faculty could not guarantee a gun-free audience, she canceled her appearance. “In that decision, we witnessed one of the first clear examples of how laws allowing concealed weapons on a college campuses can thwart academic freedom and First Amendment rights to free speech” (Sinor). As of 2014, legislators in fourteen states have passed and introduced laws allowing concealed weapons on college campuses. Even after faculty members, public officials, and administrators have voiced their opinion that they do not want guns on campuses, they are not in charge of making the decision. Across the country, state legislators are regulating campus culture, and in doing so they are restricting university officials, threatening academic freedom, and interfering with the education of students (Sinor). Professors may even choose to change course content because of a perceived threat or they may retire early or quit their jobs at a college campus that permits guns.

Gun rights and changes to policies concerning gun control laws have become a major part of newspaper headlines over the last few decades, and now it is time for people to take action. People need to educate themselves before they form an opinion about the topic. Rather than accepting an opinion because it is their political party’s view. Carrying concealed firearms on college and university campuses should not be permitted because it undermines the safety of the students and faculty. Families who are getting ready to send their children to college or those who already have a student in college should educate themselves on state’s laws about guns on campuses. Students and faculty should not be afraid to come to school to learn or teach because of a potential active shooter. The safest policy to limit potential violence is to prohibit students and faculty from keeping firearms on campus and allow trained law enforcement officers to provide campus security.

The Danger of Having Guns on College Campuses. (2020, Nov 18). Retrieved from https://studymoose.com/the-danger-of-having-guns-on-college-campuses-essay 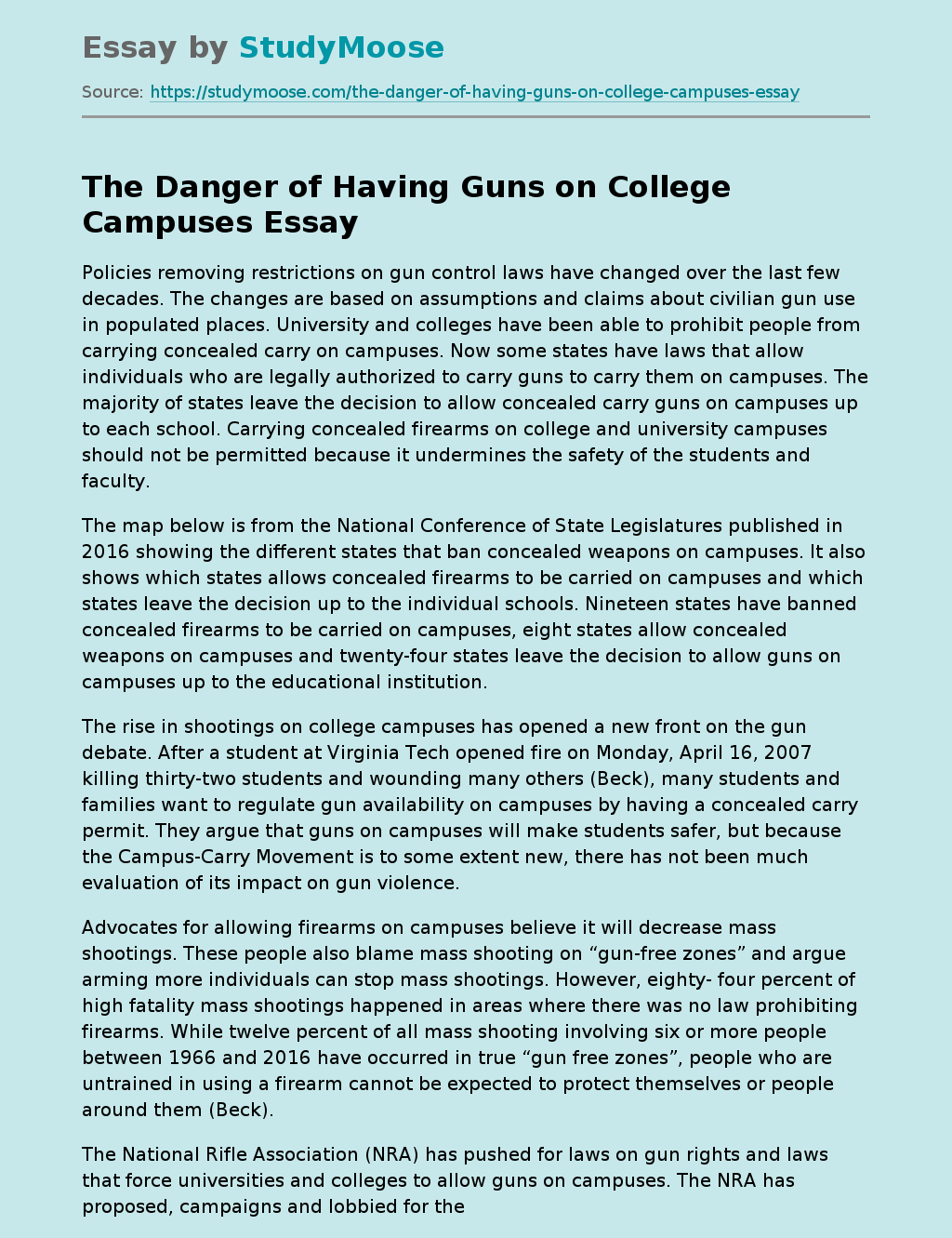