Are We Nothing but Our Bodies?

What does it mean being a faithful person? What is it to believe in something? I would say that such questions are interesting to think about and, at the same time, contradictory topics in terms of perception. As philosopher Augustine said, “belief is a volitional consent.” We can see that faith is within each of us, and it is under our control. According to Augustine, belief is a mental state that can be true or not, which is assessable for accuracy, and always taking something to be the case or not the case.

Don't use plagiarized sources. Get your custom essay on
“ Are We Nothing but Our Bodies? ”
Get custom paper
NEW! smart matching with writer

In other words, we can say that belief is a truth-tracking, involuntary, and an accordingly behaving state.

I would say faith is different for each of us. It may be compared to the reality, which is the same for everyone but each of us perceives it differently, through different lenses and experiences. In this way, no one can be judged by faith or lack of it. For me, faith is being truthful with yourself, your own actions, and beliefs.

We are the only creators of our fate, and lying to ourselves is the worst self-deception that may ever exist. Being in the constant harmony within yourself, giving yourself a chance for compassion, love, and spiritual growth is the best that person can do toward him/herself. Throughout my life, I believe that I am always guided in some sense. In my life, nothing simply happens, but every event has some meaning.

Being in your inner spirituality and peace of mind make people, and particularly me, the happiest people ever.

It guides me all over the years and brings me the joy of life. Once the person has found that harmony within him/herself, he/she is able to light the world with thoughts, ideas, and unique perception of the life. Spirituality is not something that can be dictated. It has to be evoked from your soul, from your heart, from your inner world. That is the most unexplainable connection that ever existed. The person just has to be open to the changes, and the light will guide him/her. By looking at the work “Between the World and Me” by Te-Nehisi Coates, I will examine how people may be the hostages of their own bodies and how the faith or lack of it informs the life of the protagonist, whether he is able to find that inner harmony within himself or not.

In the profound work that brings up the questions about American history and ideals, while analyzing the most personal fears and emotional experiences, Ta-Nehisi Coates presents a powerful basis for understanding the history of the American nation. America was built upon the idea or race relations. The consequences of this idea are seen in everyday life activities of people, especially African American men and women, who are threatened today. How is it to be born African American and find a way to live with it? And how can we all honestly take into account this difficult story and free ourselves from our burden?

“Between the World and Me” by Ta- Nehisi Coates tries to answer these questions concerning the American nation and the current crisis by writing the letter to his teenage son. The author shares his stories about realizing the truth about his own place in society as an African American with his son. The story goes from Howard University to the battlefields of the Civil War, from the southern part of Chicago to Paris, from his orphanage to the living mothers, whose lives were taken as prey. “Between the World and Me” is a beautiful story that shows a significant way of moving forward while finding the strength of living within your own body and realizing rules that are assigned to you.

While reading the book “Between the World and Me,” I was trying to relate myself to the problems, which Ta-Nehisi Coates was raising. Author’s memories of growing up in Baltimore, studying and cultivating himself at Howard University, and a lot of other breathtaking stories helped me create the general idea of what person Ta-Nehisi Coates was. We can see that his black body is always involved in the destruction, “It was always right in front of me. The fear was there in the extravagant boys of my neighborhood, in their large rings and medallions, their big puffy coats and full-length fur-collared leathers, which was their armor against their world” (Coates 14). Ta-Nehisi Coates tells us how cruel and violent were days back in Baltimore, and that constant fear has never left him.

The constant confrontation within the author’s mind helped him broaden the issue of the fight black people have to face in their everyday life. Nevertheless, based on the discussion mentioned above I would like to look at Ta-Nehisi Coates work “Between the World and Me” through the lens of the human condition that includes both facticity and transcendence.

Jean-Paul Sartre, a French philosopher existentialist, claimed that bad faith is the denial or evasion of some aspect of the human condition. There are two types of human condition: facticity and transcendence. Human beings are usually considered to be both of the human conditions mentioned above. Facticity (aka “being-it-self”) means the set of facts that cannot be altered or inescapable set of facts that define what you are. The transcendence (aka “for-it-self”) means that consciousness is nothingness, “nihilates”, “nothingness”, “negation.” It means freedom, a function of consciousness (activity force of “nihilating force”) that constantly transcends, negates the given circumstances (facticity). At that time, consciousness is usually going beyond the being of any given moment. Thus, bad faith is self-deception because a person can either deny his/her facticity or transcendence.

Denying your facticity, which means that you are constrained by the facts, means that the person is being delusional. Delusion means denying the obvious, overestimating the freedom, or simply seeing the world as you want to. Whereas denying your transcendence, which means that you are more than the facts, that you are freely denying your own freedom by usually saying that, “It is what it is,” “I am what I am.” In this way, authenticity is the best and optimal option for a human being. It means a “valid coordination of my facticity and transcendence,” while also a constant ongoing negotiation within oneself.

Ta-Nehisi Coates in his work “Between the World and Me” shows us that he is a materialist who uses the forces of nature to explain the racism. The author proves his skepticism in rejecting the fact that things in our life happen for a reason. In such a way, we see that he is denying the magic that might derive during the life of human beings, which gives hope for moving forward besides all the circumstances. He explains the word racism as “a visceral experience,” while saying to the son that, “You must never look away from this. You must always remember that the sociology, the history, the economics, the graphs, the charts, the regression all land, with great violence, upon the body” (Coates 10). This shows that Ta-Nehisi Coates is denying his transcendence without even realizing it. Facticity emphasizes our social condition, which is publicly visible by claiming that “I am a body” while transcendence is all about the fact that “I have a body.” Although all of the conditions are simultaneously true, the authors constraint of the body shows that he is freely denying his own freedom and opportunities that might arise ahead of him.

Certainly, some people might say that in Ta-Nehisi Coates case, he needs to be constrained by his own body because he needs that first before acquiring his own transcendence, whereas he also needs to survive through the everyday fear. According to Linda Zagzebski’s Self-Trust and the Diversity of Religions, consciousness (aka being careful and aware) belief depends on your self-trust. It means that when you form your beliefs, you rely on yourself, your perceptual abilities, own memory, and, eventually, your self-trust in order to understand that what you believe is true. Based on the discussion above, people can say that Ta-Nehisi is directly following Zagzebski’s ideas, thoughts, and logic. In order to form the conscious belief, Coates needs to fully realize his abilities and the facts of the current situation. Also, Zagzebski states that self-trust and emotions have some connecting points.

Emotions are not only raw feelings but they actually tell us something and help us to fairly evaluate the indicators of happiness, injustice, or maybe even danger. In spite the fact that self-trust is necessary for forming our beliefs and emotional life, and that Coates might be applying such concepts to his everyday life, I would say that being in your constant ongoing negotiation between both facticity and transcendence is better. By consciously realizing the abilities of the persona you are while giving yourself the freedom of choice, it is possible to become a better version of yourself.

Jean-Paul Sartre also presented his view upon human reality in the work Existentialism is a Humanism. There are several critiques that may arise throughout life within one’s person, such as quietism, solipsism, and nihilism. Quietism simply means remain quiet. Solipsism means being trapped in your own head and say nothing about the social world that surrounds you. Whereas nihilism means that nothing matters and that there is no value in it. In such a way, Jean-Paul Sartre proposed his own existentialism motto – existence precedes essence, which means human reality. In other words, we can say that what you are is what you choose to be and that there are no questions, only choices. Realizing all this leads me to say that it is only up to Ta-Nehisi Coates who or what he is becoming. Based on the experience the author went through he was able to realize the facts about his own body and history.

I would say that these factors might help him to move one, find his own way, and necessarily take a more personal responsibility on his own life. He is the only person of interpreting the signs that life is able to give to him. It is a constant ongoing sense of creating yourself as a person while defending your own rights and thoughts. In this way, I want to say that Coates destiny in his own hands as identity is a project we are creating over our lives.

By analyzing Ta-Nehisi Coates book Between the World and Me while relying on the most acknowledge philosophers as Jean-Paul Sartre, Linda Zagzebski, and Augustine I am able to confidently state that being constrained by your own body can lead you to the fact that you are going to remain quiet and just be trapped by the thoughts in your own head. Interpreting all the signs and experience the life gives to us is just another choice we make every day. So let us make these choices without locking ourselves down but giving a chance to our consciousness to go beyond the state of any given moment!

Are We Nothing but Our Bodies?. (2019, Nov 21). Retrieved from https://studymoose.com/faith-example-essay 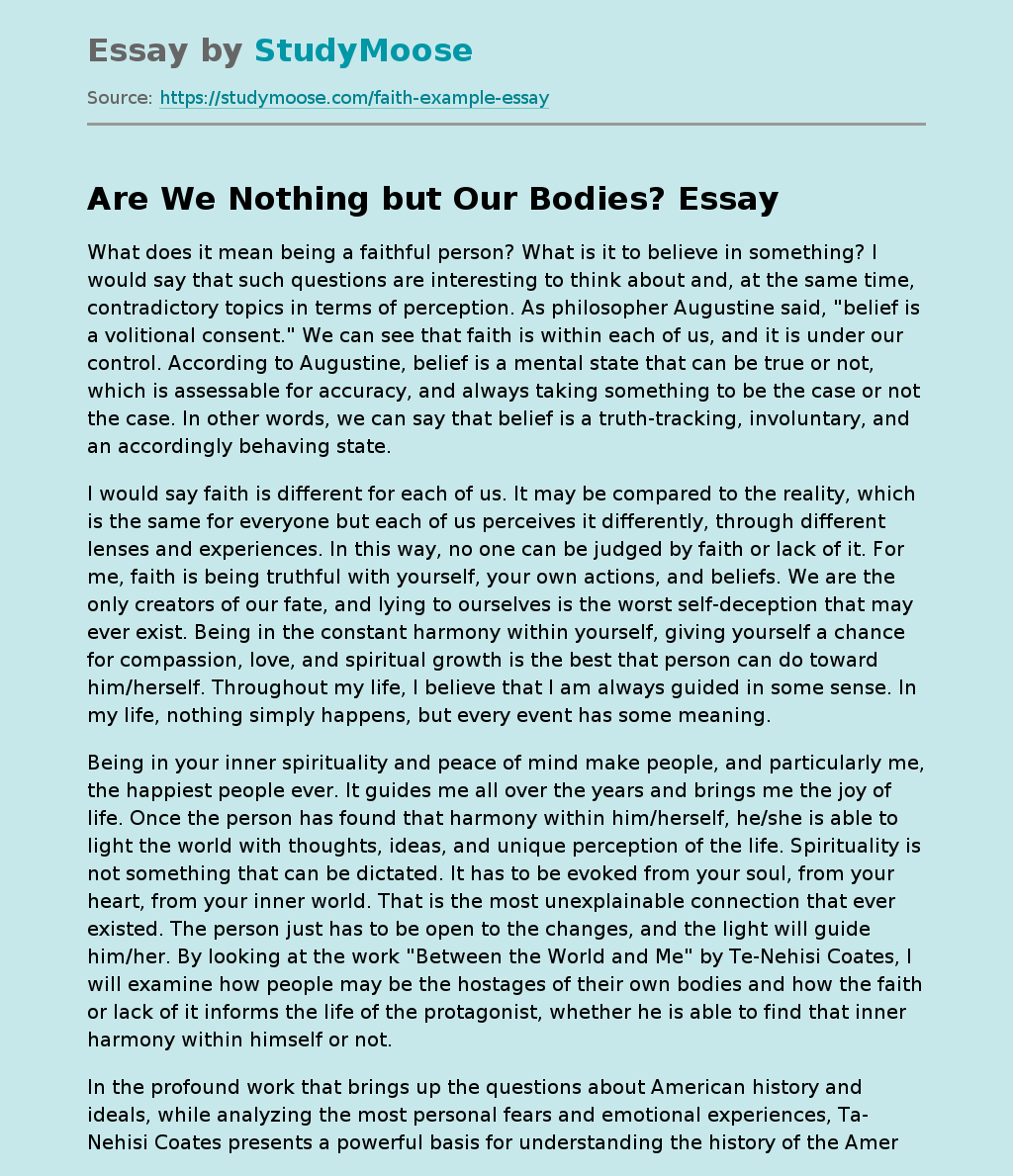