Othello: a noble character who loses but ultimately regains our sympathy

Othello is most definitely an imperial character who gets assassinated by his “trusting friend” Iago. We see his nobility from the beginning, Othello is being accused of all sorts of things, still he doesn’t hide and wants to clarify the situation and even lets his wife speak for herself; he continues to prove that he is a right and just character when he is put into the position of breaking the rules to help his friend or to do what is right, which means he had to fire his own friend.

Don't use plagiarized sources. Get your custom essay on
“ Othello: a noble character who loses but ultimately regains our sympathy ”
Get custom paper
NEW! smart matching with writer

From here on Othello’s behaviour is utterly despicable. However I an abundance of sympathy for him, as we know Iago’s plan however Othello can’t help but lose his peace of mind and his personality completely changes. This leaves me with deep sympathy for his human nature of getting jealous so easily. He treats Desdemona appalling and rules over without giving her an opportunity to prove herself; Othellos behaviour is reprehensible and crashes to a new low when he strikes his wife, calls her a whore and goes to the extreme of killing her.

Here I have a small amount of sympathy as he is being tortured by Iago. At the end he realises what he has done and tries to redeem himself by doing the noble thing and killing himself as well.

However I have no sympathy for him at this point he should have never let it come this far, he had the ability to stop it.

In the opening act we immediately see the racism towards Othello. Iago proclaims to Desdemona’s father Brabantio “even now, now, very now, an old black ram is tupping your white ewe”. Brabantio is outraged by this proclamation and doesn’t believe his daughter would be capable of such betrayal. Iago adds “You’ll have your daughter covered with a Barbary horse; you’ll have nephews neigh to you” and the final comment that pushes Brabantio to go in search of Othello “your daughter and the Moor are now making the beasts with two backs”. I have great compassion for Othello as in the first act without yet meeting him, we are led to believe that he is some animal that has put Desdemona under “spells and medicines bought of mountebanks” When Brabantio confronts Othello, his nobility shines through. Othello shows us that he is brave and calm. Othello doesn’t run away, he stands up for himself and refuses to fight without good reason “Keep up your bright swords, for the dew will rust them.” Othello is definitely respectful and could almost be called a feminist.

Instead of speaking on behalf of Desdemona he “send(s) for the lady to the Sagittary, and let her speak of me before her father” In Shakespearian times was an unheard of thing to do yet it was incredibly noble and respectful. Othello continues to be a model character when he chooses to do the right thing over choosing what is easy. Othello was faced with the decision to fire his close friend Cassio. He values his reputation and if he was to over look Cassio’s mistake, Othello’s professionalism would be questioned. “Cassio, I love thee; but never more be officer of mine.” I have deep sympathy for him at this point as we, the audience, know that this is all part of Iagos wretched plan to ruin Othellos life. Othello is clueless as to what “honest Iago” has in store for him. It is not until the temptation scene until Othello’s nobility immediately gives way. At this point, Iago has a heist on Othellos life. Othello has lost the ability to sleep; his peace of mind is ruined along with his nobility and his confidence in his own opinions and beliefs. As I mentioned already, Othello used to treat Desdemona with the upmost of respect and dignity, however Othellos kind and gentle personality have been drastically altered.

Othello no longer gives Desdemona the opportunity to defend herself. In fact she is so clueless and confused, she doesn’t know why her loving husband has taken such a turn, she then blames his erratic behaviour on work stress saying “something sure of state…. hath puddled his clear spirit” Othello also calls Desdemona a “whore” when he asks “Are you not a strumpet?” I must admit I have a bit of sympathy for Othello here because he is not in his proper state of mind. However he strikes her in front of her friend and family “I (Desdemona) never gave him cause” She is in disbelief that her husband would be capable of such a thing. After this I have absolutely no sympathy for him; it is completely unacceptable to hit a woman, regardless of the circumstance. In the final scene Othello crashes to an all time low. Othello stands over his sleeping wife, preparing to kill her. Desdemona attempts to plead with Othello “And have you mercy too! I never did offend you in my life”.

She asserts her innocence, but Othello smothers her. Again, I have no compassion for this act whatsoever. Desdemona did not deserve to die “a guiltless death”. After realisin the truth, Othello is crushed “Are there no stones in heaven but what serve for the thun der? Precious villain!”. Othello then makes a speech about how he would like to be remembered, and begs for punishment, he pleads “Wash me in steep-down gulfs of liquid fire!” He then does the somewhat noble thing and kills himself with a sword he had hidden “Killing myself to die upon a kiss.” It is clear to be seen that Othello is a noble character however Iago does everything he could possibly do to ruin Othello’s marriage, career and ultimately his life, which conclusively deteriorated his nobility as the play developed. I feel that he did not regain my sympathy as I feel that he took the easy way out by killing himself. Even though he was severely manipulated by Iago, the way he dealt with the situation was too harsh and if he kept a level head and addressed the issue differently, so many lives could have been saved.

Othello: a noble character who loses but ultimately regains our sympathy. (2016, Mar 23). Retrieved from http://studymoose.com/othello-a-noble-character-who-loses-but-ultimately-regains-our-sympathy-essay 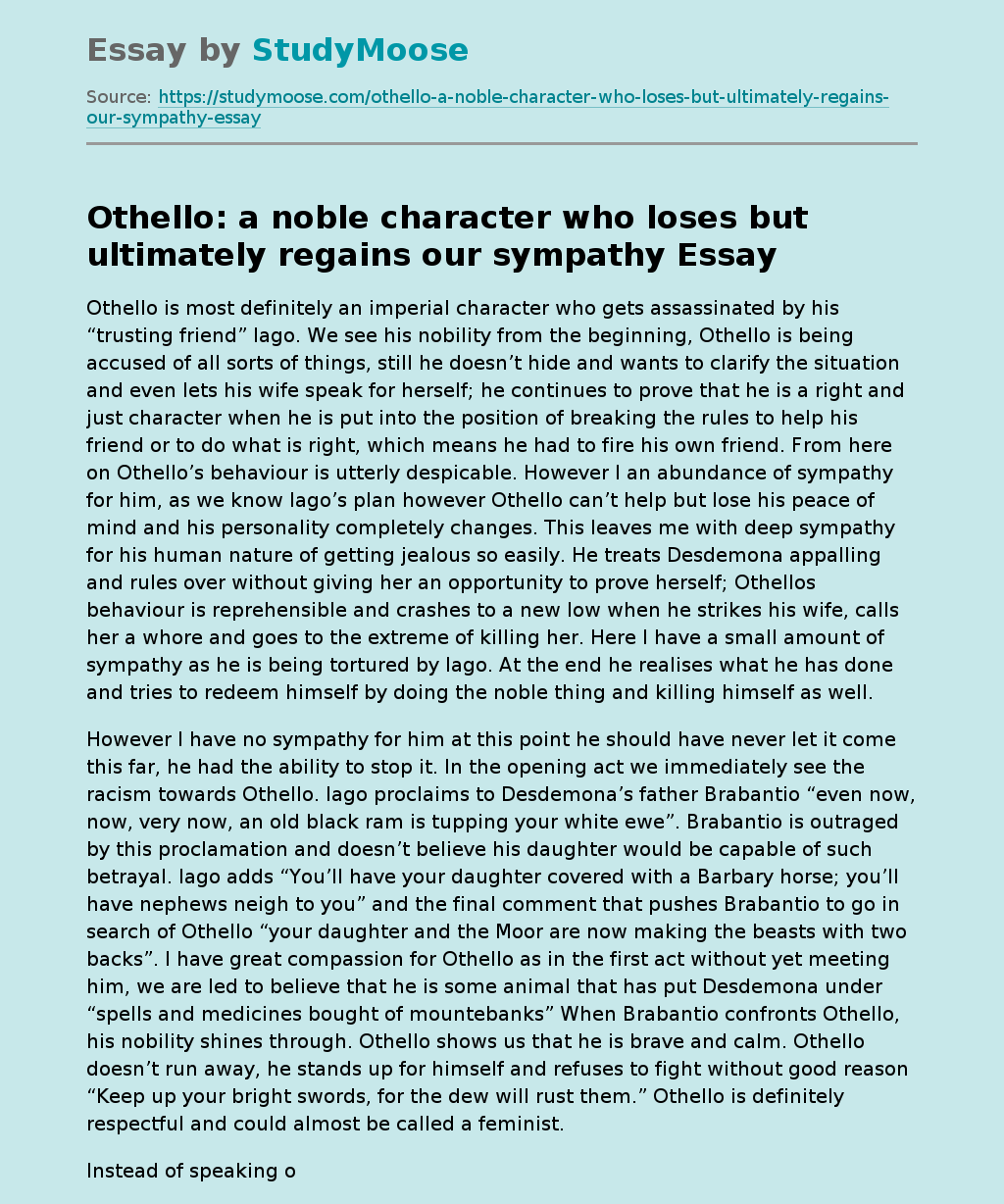