Who Is Ultimately Responsible for the Tragedy of Macbeth

Macbeth was always a loyal man to his King, but when he knew he had the chance to get the kingdom he always wanted, he knew that he had to do everything he could to get it. In this play, Macbeth shows how he was weak, and let people control his actions. His actions and his led to his death, which left the people who changed him ultimately held responsible for his death. The three people that were held responsible for the death of Macbeth were the witches, Lady Macbeth, and Macbeth himself.

Don't use plagiarized sources.
Get Your Custom Essay on Who Is Ultimately Responsible for the Tragedy of Macbeth Just from $13,9/Page

The witches were the characters that started off the twisted events in the story, which led Macbeth to become vulnerable.

Macbeth allowed them to get into his head, which caused himself problems throughout the story. The witches gave Macbeth mixed signals which led him to go crazy and do whatever it took to be fearless. Lady Macbeth pushed Macbeth too hard to become more ambitious for the throne, which brainwashed him to turn into a murderer.

Lady Macbeth was even scared for Macbeth at a later point of the play, because she knew that he had played too rough to get what he wanted by killing everyone in his way.

The most obvious person who was held responsible for Macbeth’s death was himself. Not only was he brainwashed, but he allowed everyone to take advantage of him. He never listened to himself, and never took responsibility for his actions. At the end of the play, he finally understood that he should do what his instinct told him, but at that point of the play, he ended up killing families which led people to be furious with him and want him dead. They are ultimately three reasons held responsible of the death of Macbeth. Firstly it the tree witches.

The three witches took advantage of Macbeth’s ambition for being King, and brainwashed him into changing him for the worst. They gave him prophecies that made him feel unstoppable, but ironically made him fall into his death. The witches started to brainwash Macbeth by getting him excited to be soon to be King. They knew that he had lust and ambition to keep the throne, so they had fun playing games with him. “All hail, Macbeth, thou shalt be king hereafter! ” (1. 3. 50). This was the first prophecy that Macbeth was interested in.

He got the thought of how his life would be of being King, which turned his life around for the worse. An apparition prophecy that the witches gave Macbeth was the apparition of a bloody child that told Macbeth that no man born of a woman can do him harm. That apparition gave Macbeth confidence: “Then live Macduff: what need I fear of thee? ” (4. 1. 78-80). This was ultimately the prophecy that killed Macbeth, because he assumed that no man could kill him. Macbeth was soon surprised to know that Macduff was not born of woman, but born of a C-section, and later killed him in battle.

The witches had suckered Macbeth into thinking that the apparitions and prophecies were not as they seemed. Another apparition that the witches gave Macbeth was a crowned child. “Macbeth shall never vanquished be until Great Birnam wood to high Dunsinane hill shall come against him” (4. 1. 92-94). This apparition was a trick played by the witches on Macbeth. When they gave this apparition, Macbeth got a different idea of what it meant. Macbeth thought that he would never be vanquished until Great Birnam Wood literally came across the castle.

This gave Macbeth confidence which made him think that he was unstoppable. They made him into a fearless character which resulted into him being killed, which was a cause that the witches were ultimately responsible for the tragedy of Macbeth. Secondly. Macbeth chose to go down a path where he could have what he always wanted, which was to be King. What he didn’t realize was how far he had to go to get the throne, and what he had to do to keep it. Macbeth himself is held responsible for his death, because of his actions towards others, and the downfall he caused on himself.

Macbeth became a murderous tyrant soon after he became King, which was the main source of why he was a reason for his death. The first sign of him becoming a murderer was the assassination of King Duncan. “Stars, hide your fires, Let not light see my black and deep desires;” (1. 4. 50-51). This quote explained how he was loyal to Duncan, but was questioning whether to kill him or not. This was the first sign of the changing of Macbeth. At the beginning of the play, he was portrayed as a loyal man towards his King and his fellow people, but this event of the killing of Duncan changed him into a monster.

That I require a clearness: and with him to leave no rubs nor botches in the work Fleance his son, that keeps him company, whose absence is no less material to me than is his father’s, must embrace the fate Of that dark hour” (3. 1. 146-151). Banquo was the only person who knew of Macbeth’s prophecy, so he needed to make sure that Banquo couldn’t expose his plans. He decided that he could kill Banquo’s son so he wouldn’t become King in the future. He started to become a monster because he tasted the power of the throne.

He wanted to make sure nobody stood in his way, and started becoming. “The very firstlings of my heart shall be the firstlings of my hand” (4. 1. 147-148). When Macbeth had said this, he was determined to kill Macduff’s family as a message that he is ready for anything, and that he doesn’t find him as a threat. He wanted to show himself that he needed to follow his instincts, and if he had done that from the beginning, he could have had everything solved. This brought Macbeth one step closer into becoming a crazed monster.

He wanted all his problems to be solved by killing anyone in his way. Lastly is Lady Macbeth. One of the most famous quotes told by the witches was “fair is foul, and foul is fair. ” This quote explains how nothing is what it seems. A prime example of that is Lady Macbeth’s attitude throughout the play. Throughout the beginning of the story, Lady Macbeth acted as the “man” in family and was dominant over Macbeth. She wanted him to work for the throne instead of sitting back and doing nothing about it. Yet do I fear thy nature; It is too full o; the milk of human kindness to catch the nearest way. ” (1. 5. 16-18).

This quote explained how she felt that she didn’t think he had it in him to become a King. She said this quote after hearing the Macbeth had got the prophecy of becoming King. She wanted to make sure that she could man him up. “But screw your courage to the sticking-place, and we’ll not fail” (1. 7. 60-61). After Lady Macbeth failed to kill Duncan, she wanted to try and convince Macbeth that he is incapable to kill Duncan, which made Macbeth more eager to become King.

She encouraged him to become more of a murderous tyrant, which is an example of how she corrupted him to his death. “She should have died hereafter; there would have been a time for such a word” (5. 5. 17-18). This is what Macbeth had said after observing his wife’s body at the castles grounds. After he found out that his wife was dead, he knew that he didn’t have anything to lose. This brought him one step closer into losing control of himself, and not letting anything else get in his way.

He still had the assumption that no man born of woman could harm him, so he decided to just take on whoever wanted to challenge him, which left him to die from Macduff. Lady Macbeth showed to be a dominant character over Macbeth, which led her to be a cause of the corruption and downfall of Macbeth. At the end all three personas led to Macbeth’s death. The three witches gave Macbeth a total of 9 prophesies witch where totally misinterpreted by himself. Lady Macbeth is the one who triggered Macbeth’s madness witch then led to Macbeth killing many people including his own cousin Banquo.

The last person that was responsible is Macbeth himself, he let greed take over and so he started to misinterpreted everything that as going on. Ultimately, the three witches, Lady Macbeth, and Macbeth himself were all responsible for the death of Macbeth. Not only did the physical body of Macbeth die, but the loyal caring man inside that was transformed into a monster. Macbeth transformed from a noble shoulder to a murderous unreliable king which ends up dead because of his actions.

Who Is Ultimately Responsible for the Tragedy of Macbeth. (2016, Dec 12). Retrieved from https://studymoose.com/who-is-ultimately-responsible-for-the-tragedy-of-macbeth-essay 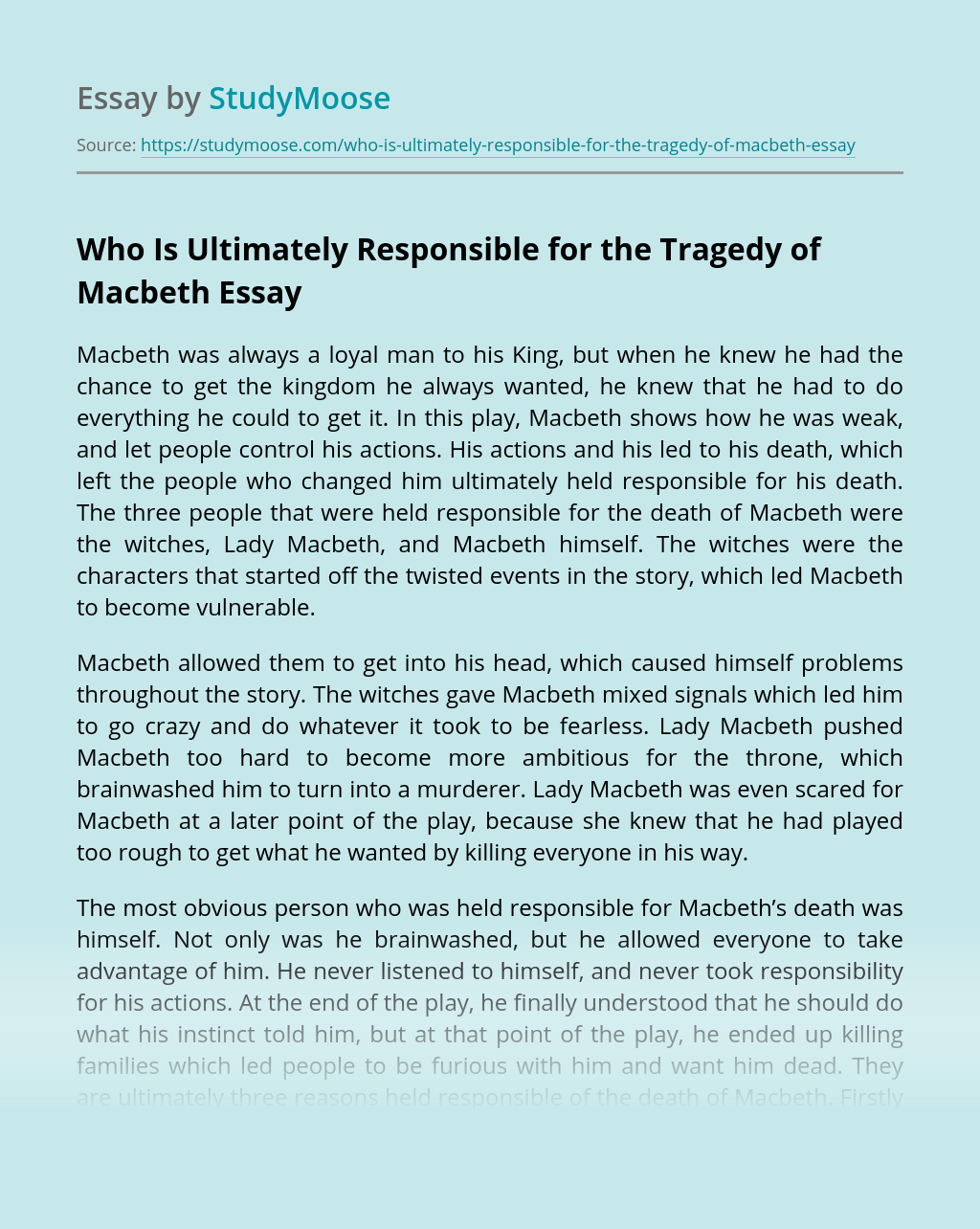 Women’s Role in Heart of Darkness

The two main female characters can be seen as symbols of the contrast between light and darkness. About Kurtz’s mistress it is told that “She was savage and superb, wild-eyed and magnificent; there was something ominous and stately in her deliberate progress. ” (Conrad 125) She embodies the wild, untamed land of Africa. She is...

‘Of Mice and Men’ is a short novel by John Steinbeck, which is set in 1930s America. At this time in American History they were suffering from a hard hitting economic depression. This book is set on a ranch in Soledad, California. Throughout this novella, Steinbeck addresses key theme, for example discrimination, loneliness and the...

Get Essay
A Thousand Acres vs. King Lear

After watching both films, A Thousand Acres made in 2007 starring Michelle Pfeiffer, Jessica Lange and Jason Robards and King Lear made in 2008 starring Ian McKellen, Frances Barber and Kieran Bew, I decidedly liked A Thousand Acres much better. Mostly for it’s acting, and the modernism of the story line. (Although, a King Lear...

In the book Animal Farm, all the main characters are animals. The book starts with all the animals of the farm, gathering to hear the old wize pig, Old Major, telling the other animals of a dream that he has had. Not so long afterwards, Old Mayor dies. The story of Showball starts when the...

“Many critics have suggested Hamlet chronicles the perils of life within a largely false and dishonest world. To what extent has this been your experience of Shakespeare’s play?” The world we currently know has experienced many stages and eras such as the Renaissance era and the New World Era. In each of these eras, falsehood,...