Dramatic devices in "The Inspector Calls"

In this essay I am going to consider and discuss Priestley’s concerns, his dramatic devices and how they make us feel and how he keeps the audience interested. Priestley is concerned about the welfare of everyone and tries to put this across by showing how Eva Smith was a nice girl but she was not treated how she should have been as she was of a lower class to the Birlings and therefore considered a worse person. Priestley was concerned about this as he felt everyone should be treated equally no matter what class they were.

Don't use plagiarized sources. Get your custom essay on
“ Dramatic devices in “The Inspector Calls” ”
Get custom paper
NEW! smart matching with writer

The time in which the play was set, 1912, is important, as this was a time when class was very important to society.

The play was more about moral matters

I think the play was more about moral matters than the Birling family dinner. I think it was trying to show that we should respect men and woman regardless of class and wealth and I think it was about social justice, in a way everyone could understand and relate to.

The play was set in 1912, before the two world wars when there was no welfare state to help people like Eva Smith as she would have been of a lower class and less wealthy than people such as the Birlings. It was written in 1945 after the 2 world wars as a lot of social change had happened and people were starting to respect each other as equals.

This would be an important time for people interested in social justice as the wars brought people together and everyone learnt that no matter what class you were from you were a human being and were just the same as everyone else.

I think a lot of respect would be gained for people of a lower class around this time. Priestley concerns for social justice can be seen clearly in Act 1. You can also see how the feelings between the younger generation such as Sheila and Eric and the older generation, Mr and Mrs Birling differ. It is also clear to see the difference between the Birlings and Eva Smith according to class and wealth.

The difference between the Birlings and Eva Smith

I will explain these concerns in detail later. The Stage devices in Act 1 are important to this play as they really set the scene. The lighting would be dull to make the room feel enclosed and to make it feel quite dim yet cosy and the furnishings would be appropriate to the time the play is set. This affects the audience as it makes them feel involved in something quite intimate. The entrances and exits of the characters are also very important. The way the inspector comes into the play makes him instantly seem mysterious and unpredictable as he is unexpected and unknown.

This keeps the audience interested as, at this point, we are just as clueless as the Birlings as to who this inspector is. The order of events is really good and keeps the audience interested as it starts off as just a basic outline of all the events so we know just the basics of what happened and then during the course of the night more events and stories are entwined into Eva Smiths life. As we find out more and more about this girl’s life and how each person played a part in it our views on the characters are changed quite dramatically as we find out they aren’t really what we thought they were.

This puts across some of Priestley’s concerns as our initial judgements and perceptions are quite wrong as we begin to find out what these people are really like. I think this shows that we should not judge a person, such as Eva Smith, before we know them. Priestley holds back quite a lot of information in this play and that keeps us interested, as we’re not really too sure what’s going on ourselves. Priestley leaves us with a great sense of mystery and we’re forced to try and decide what could happen next. The characters in the play are also really important.

The characters are almost stereotypes of different people and through out the play we start to look past it. Sheila is seen to be a silly immature child but near the end of the play we start to see that she is a mature young woman and is very sensitive. She also appears to have more respect for people than her parents, as Mr and Mrs Birling don’t really feel any remorse for what happened. Although when Mr and Mrs Birling first find out they say if she were still alive they’d do anything to help her, when they realise the inspector isn’t actually an inspector they take it all back and don’t feel any remorse for the girl.

The younger generation, Sheila and Eric are very sensitive to all this and understand what they’ve done is wrong and they truly are sorry and will never treat anyone like this again. I think Priestly wants people to be more like Sheila and Eric and not just forget about situations like this just because they don’t relate to them. The characters also really help us to see the contrast between the Birling’s and Eva Smith’s Lives. The language of each character is very particular to their personality. Mr Birling speaks very confidently and shows he is very sure of himself by doing this.

He speaks his mind and believes what he says is always right. Sheila is made out to be giggly and childish at the beginning as she uses words such as ‘squiffy’, which would not be seen as proper language in those days. Eric speaks in quite a slurred way and sometimes talks very merrily and other times he speaks in quite a sullen manner. The ways in which the characters speak are quite important in trying to understand the characters. Just by Mr Birlings loud confident voice you can tell he is going to be very pompous, such as Eric’s difference in tone shows he could be quite an indecisive person and quite secretive.

The way the inspector speaks is also good for building up his character as he always speaks very calmly yet forcefully. In conclusion I think that Priestley’s concerns do still matter today. Although the social situation has changed slightly and we no longer like to think we use class and wealth to separate people I think we still do. Times have changed slightly and we use different language such as we may refer to really rich people as ‘snobs’ or homeless people as ‘tramps’.

This is slightly different to how it used to be but it is still separating people into class. Money is still widely talked about amongst most people and although we may not boast about it or talk of how little we have, people still make assumptions about how they think your financial state is. It is important these days to have designer clothes and flash cars but we all need to look past this and see the person under all the latest gear or the scruffy clothes because we could all end up in a situation like the Birling’s if we don’t.

Dramatic devices in "The Inspector Calls". (2020, Jun 02). Retrieved from https://studymoose.com/dramatic-devices-7266-new-essay 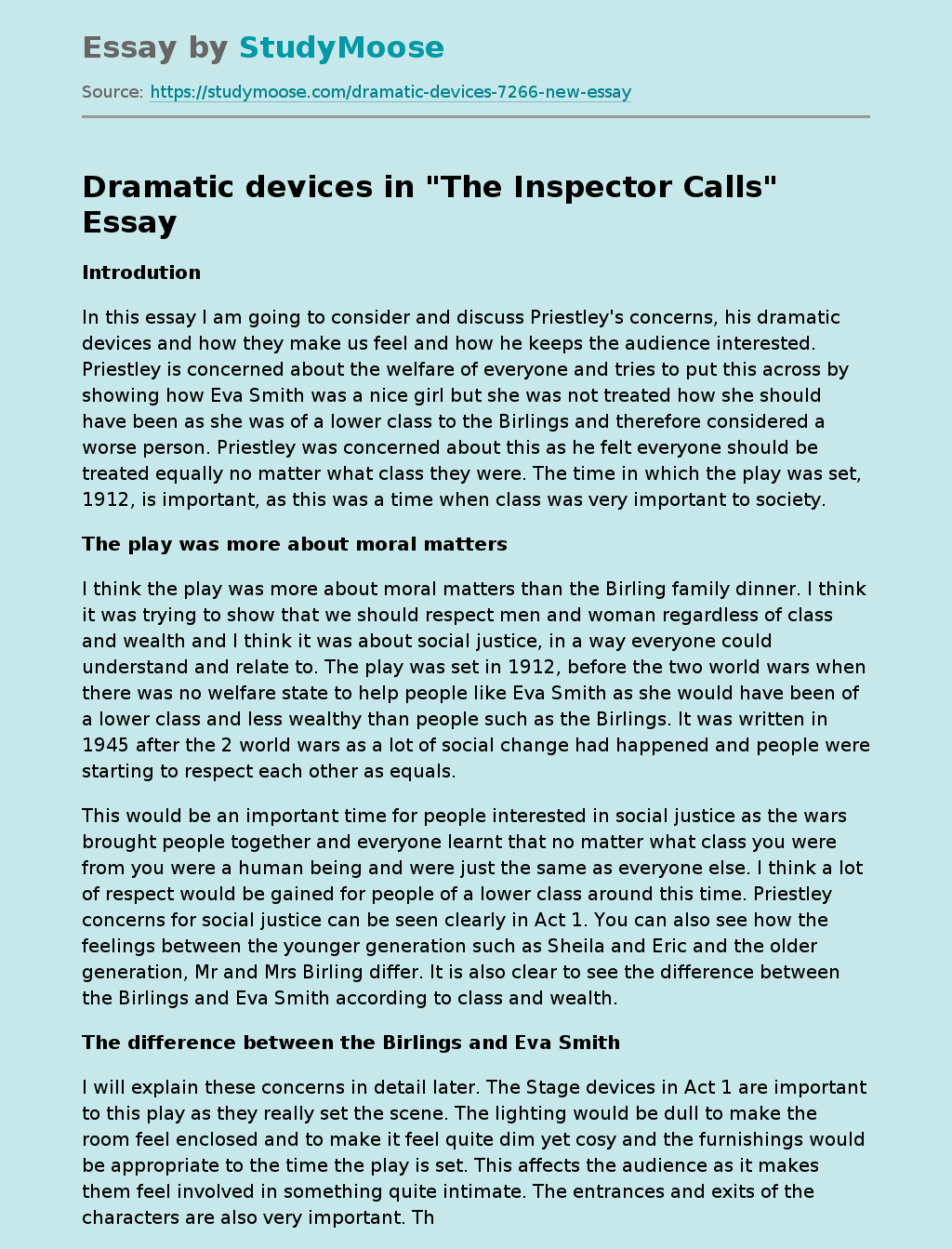