Priestley’s dramatic methods and how an understanding of the historical and social context might help shape the response of an audience Before the characters start talking Priestley describes the setting. The drama is set in a large suburban house in 1912: this was before the First World War and a time of prosperity for people like the Birlings and Crofts. The play was written in 1945, though; after the Second World War putting on a drama production would have been expensive which would explain why the set is reasonably simple and doesn’t change between acts.

Don't use plagiarized sources. Get your custom essay on
“ An Inspector Calls essay ”
Get custom paper
NEW! smart matching with writer

As it is the relationships between the characters in the play that is the main focus the set doesn’t detract from that.

The Birlings are a wealthy upper middle class family and they have a house that they have made sure shows it. They also show off their money through the clothes they wear: the first time the audience sees them the characters are in evening dress.

There are not many props in the set either. The champagne, port and cigars show how well off they are and there are only two other important props. The telephone that could only be afforded by the rich and Sheila’s engagement ring from Gerald.

The lighting is also mentioned in the prologue; at first it is supposed to be pink. This could suggest the idea of them seeing their world and the world around them with rose-tinted glasses. When the Inspector enters the Birling’s home and interrupts the celebrations, the warm pink light turns brighter and harder as if the scene he has walked into is under examination.

This change makes the Inspector seem powerful and is foreshadowing of him being supernatural. The contrast in light is used by Priestley to intensify the dramatic moment when the Birlings cosy bubble bursts.

The opening scene of the play is the celebration of Sheila and Gerald’s engagement and with this comes the usual celebratory atmosphere. This is shown through the oozing confidence of Mr. Birling. He has his place at the head of the table from where he makes his toasts and speeches. ‘It’s one of the happiest days of my life. And one day, I hope, Eric, when you have a daughter of your own, you’ll understand why.’

The speeches give an idea of apparent happiness that will shortly be destroyed. Priestley creates this sense of self-satisfaction in order to increase the dramatic effect when it all crumbles for them. In contrast though Eric is sitting downstage from the rest of the crowd showing physically his distance and separation from them. He openly squabbles with his sister at the table, making him seem immature, and as the quarrel is over his drinking it is ominous for further on into the play. This is only one of the many tensions hinted at though in the opening scenes. One of the ones that stands out most vividly is the question of Gerald’s whereabouts during the summer when he hardly came near Sheila, an odd thing to bring up and discuss on the night of your engagement.

The scenes before the inspector enters are ominous in many ways; the main topic that stands out though is Birling’s references to how a scandal would ruin his chance of a knighthood. This is very important to him as a social climber, and there is a hint that if he achieved it Gerald’s parents would approve of the engagement. Right before the inspector comes in Mr. Birling and Gerald are even joking about Eric causing a scandal when little do they know that he already has planted the seeds for one, they just haven’t heard about it yet.

The sharp ring announces the arrival and cuts through the party atmosphere bursting their bubble. When the bell goes it is late at night and unexpected which seems to clash with Mr. Birling’s assumption that he knows what is going to happen. Which we know he can’t. The predictions he makes are completely wrong, the point of Priestley making him incorrect is to get the audience of 1945 and post-Second World War to question his other views and beliefs. Priestley uses the audiences’ historical knowledge to create dramatic irony when Mr. Birling says, 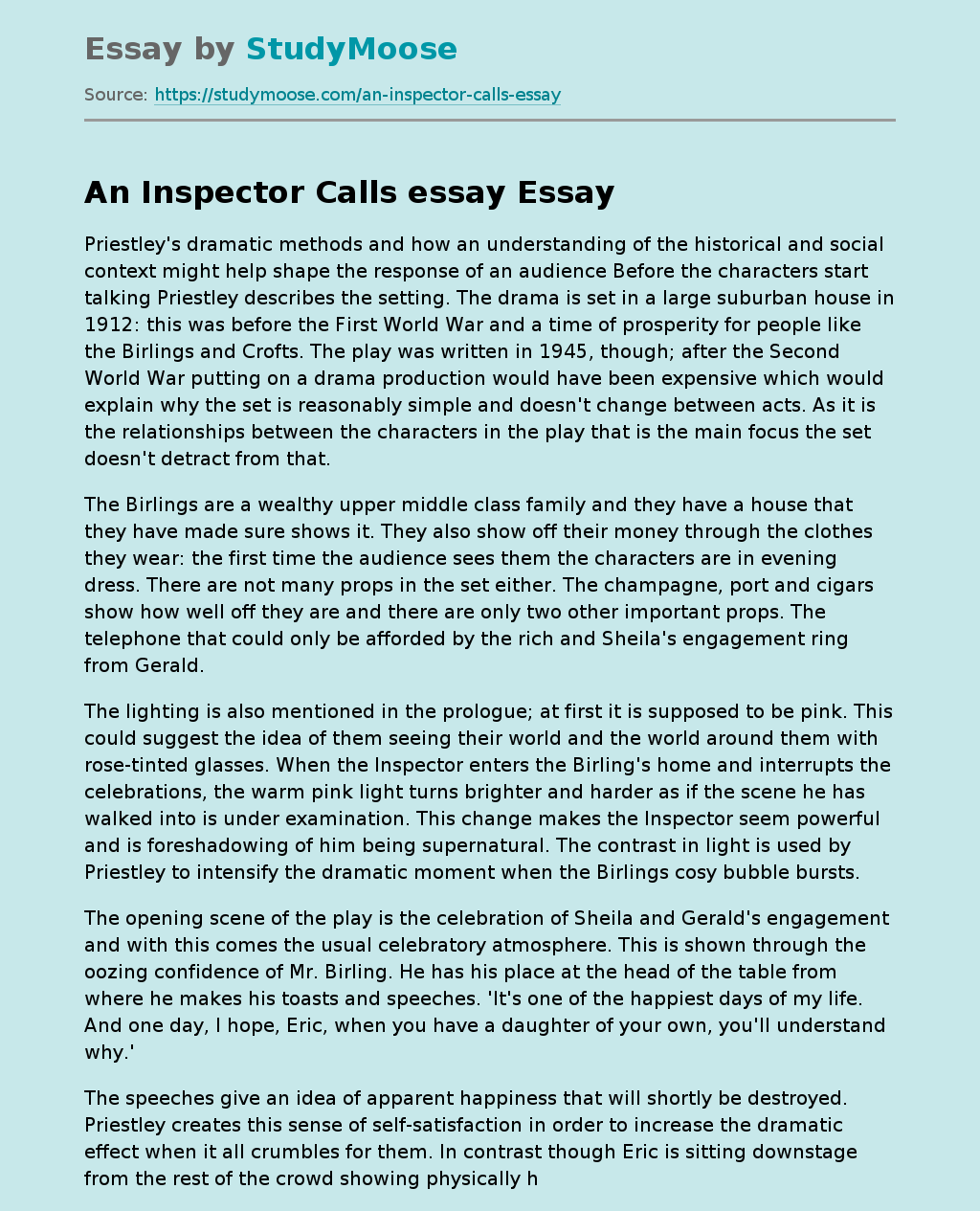