How does Priestley present the theme of responsibility in "An Inspector Calls"?

The play ‘An Inspector Calls’ is a political satire written by a devoted socialist, J.B Priestley – an ex-soldier who fought in World War I. The play was set in 1912, 2 years prior to World War I; however it was written and published in 1945 – just after world war II. Priestley uses this time difference effectively to emphasise the British society of 1912, where there were firm class and gender barriers; Priestly detested this and was passionate towards the need of collective responsibility – he believed that if there was no change, the consequence would be ‘blood, fire and anguish’.

Don't use plagiarized sources. Get your custom essay on
“ How does Priestley present the theme of responsibility in “An Inspector Calls”? ”
Get custom paper
NEW! smart matching with writer

Nonetheless most of these barriers were violated by 1945; Priestly wanted to make the most of these changes. Throughout his play, he influences his audience of 1945 to take advantage of the opportunity the end of the war had set them to reform an enhanced, more compassionate society. J.B Priestly portrays Mr. Arthur Birling as an arrogant, hard-headed, selfish capitalist who is only concerned about his reputation.

Priestley intentionally exaggerates this character to corroborate his own political agenda. Birling’s thoughts towards socialist ideologies about the significance of community is ‘nonsense’ and that “a man has to make his own way”. This indicates that he has no interest whatsoever in social responsibility – through his business or his family. In Act One, Mr Birling dictates his predictions for what he thinks is going to happen in the future. He states that “The world’s developing so fast it’ll make war impossible.” the readers already know that World War I and II have already taken place.

Furthermore, he says that the Titanic is ‘absolutely unsinkable’; the audience already know that t he Titanic has sunk. Moreover, he believes that there will be ‘peace and prosperity and rapid progress everywhere’. To the audience of 1945, this character would have been viewed as laughably optimistic and short-sighted; however these were common assumptions of those living in 1912. Priestley does this to show the lack of responsibility Capitalists had for predicting what will happen in the future and causes the audience to doubt whatever Mr Birling says because he could be wrong once more.

How does Priestley present the theme of responsibility in "An Inspector Calls"?. (2016, Mar 25). Retrieved from https://studymoose.com/how-does-priestley-present-the-theme-of-responsibility-in-an-inspector-calls-essay 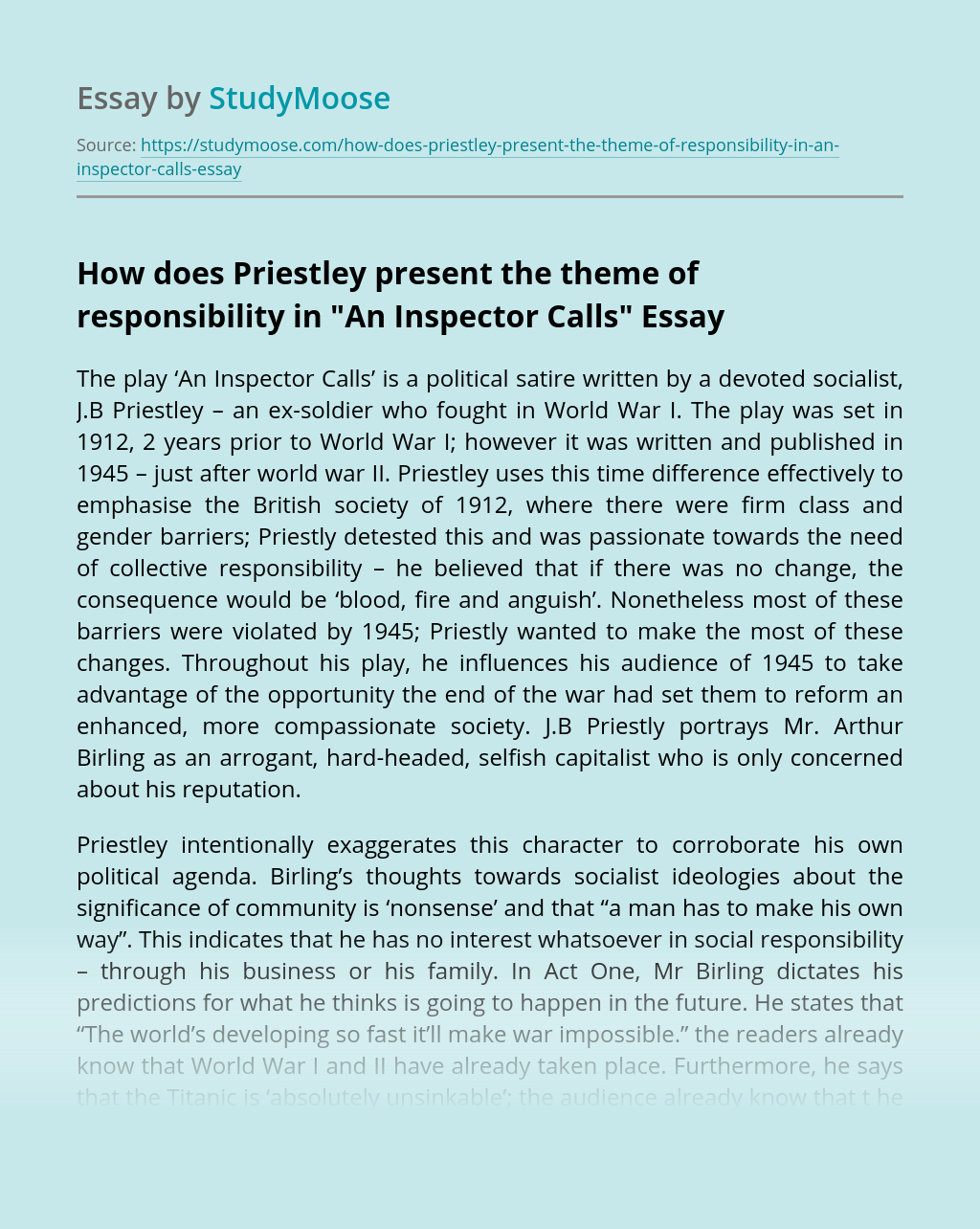