Gerald and Eric in Play 'An Inspector Calls' by J.B Priestley

“An Inspector Calls” is a play that is unusual in the fact that the setting of it never changes, with the 3 act play all set in the Birling’s dining room. It starts off with the Birling family in the company of Gerald Croft, son of Sir George and Lady Croft, sitting at the table celebrating Sheila Birling’s engagement to Gerald. All seems to be going well until the Inspector arrives on the scene and informs the family of a young women’s suicide earlier that evening.

Don't use plagiarized sources. Get your custom essay on
“ Gerald and Eric in Play ‘An Inspector Calls’ by J.B Priestley ”
Get custom paper
NEW! smart matching with writer

One by one the characters are interviewed by the Inspector and some how he draws information out of them, which subsequently leads to each of them to have a role in the events that led to the young women’s suicide. As a political and social thinker, J B Priestley was a patriotic socialist, convinced of the need for social change to benefit the poor so in this play he intended to explore themes of fate, morality and social responsibility to make his audiences think.

“An Inspector Calls” can be seen as a sort of ‘time play’ set in 1912 for an audience of 1945, enabling Priestley to make use of hindsight as a powerful tool of dramatic irony.

At first glance the play seems to be a straightforward detective thriller but as the involvement of each character becomes clearer it develops as a unique form of a ‘whodunit’, still remaining a highly effective thriller right up to the end of the play. For the opening scene, I would have all the characters sitting down around the table with Mr Birling sitting at the head of the table, as he is the head of the family, allowing him to see everyone, and Mrs Birling sitting at the other end of the table, facing her husband.

Sheila would be seated at the side of the table, at her father’s right, with her fiancie Gerald next to her. Eric would be opposite Sheila and Gerald. To show that the family are upper class the room is arranged with grand furniture, giving the effect of a ‘substantial and heavily comfortable’ house but not of a ‘cosy and homelike’ atmosphere. The mood is relaxed and cheerful with pleasant classical music playing in the background. The lighting is not on any particular character, but is on the whole table.

When Mr Birling opens the play with the port in his hand, I would have him smiling and looking very happy with himself, taking great pain to explain to Gerald that it is the same port his own father drinks, “as a matter of fact… it’s exactly the same port tour father gets him”, signifying that Birling is a social climber wanting to be on the same social level as Sir George Croft. I would have Birling standing in a grand posture, the port in his right hand and his left hand behind him with his shoulders back as he stands with his back towards the fire.

As Arthur compliments the cook his wife, Sybil ought to look surprised and shocked that he should do such a thing in the presence of Gerald when she says “Arthur, you’re not supposed to say such things” suggesting that Mr Birling is not actually of the social status he first appears to be, but is thriving to be. This tells the audience that the family, in particular Mr and Mrs Birling are trying to make an impression upon Gerald that they are better than they are, as his family is socially superior to theirs.

As Sheila questions Gerald’s whereabouts during the previous summer she is revealing the first of many incidents, which differ from the happy atmosphere that we first see. I would have her smiling at first when Gerald talks of trying for long enough and then the tone of her voice should change so that it is more serious yet still slightly playful whilst she says “Yes – except for all of last summer”. Tension can be seen between the couple about honesty and trust, with Sheila feeling insecure of her fiancie being away.

After Gerald gives her his excuse of being too busy I would have Sheila emphasise the word ‘you’ as she replies with “that’s what you say”. Although she seems quite suspicious about what her fianci?? was up to last summer, she soon forgets when he produces a ring out of his pocket. As she sees the ring, Sheila should be excited with tears in her eyes whilst looking affectionately at Gerald. Before his speech Mr Birling waits for everyone to look at him ready to listen. The characters should look at him attentively waiting for him to start whilst ‘he holds them for a moment before continuing’.

This tells us something about the character of Mr Birling as it shows that he is a man who has a certain authority about him whom everyone listens to and that he is about to say something important. After expressing his delight for the couple, Birling comments on business and political issues and as a “hard-headed business man”, which he repeats several times, he gives his opinion on these issues. At the beginning of his speech, Birling would be standing up straight with his shoulders back and his hands behind his back. There should be a spotlight on him to make him stand whilst he talks.

As he speaks of the miners’ strike he should be making lots of gestures and hand movements. When Eric asks about war, I think that Birling should start to walk round the room whilst everyone else is still listening to what he is saying with their eyes following him around the room. Birling openly talks of his views on the Germans, the Kaiser and the possibility of a war and rejects the likelihood of war because he thinks they are in “a time of steadily increasing prosperity”. An audience of 1945 would have appreciated the irony here as they had just come out of the Second World War, whilst Birling said, “there isn’t a chance of war”.

Priestley has used dramatic irony as a way of presenting the character of Birling as boastful and overconfident. To make it more effective I would have the sound of a canon going, to signify the war. Another example of this is when he talks of ‘progress’ in technology such as the Titanic that is “unsinkable, absolutely unsinkable”, which of course we know is not true as it didn’t make it to its destination because it sank. To emphasise this use of dramatic irony, Birling should talk slower but with pride, and excitement coming through in his voice when he lists the qualities of the Titanic.

Also I would have him suddenly stop walking round the room and standing still, back behind his seat. To discredit Birling further I would have a great splashing sound of a ship sinking and a picture of a newspaper with the headline ‘Titanic sinks’ behind him, to call attention to how wrong he is. As a self made man, Birling looks out for himself and thinks that everyone should hold the same view as him, but since the predictions he makes about the future are flawed the audience can immediately get the impression that he is wrong about other things throughout the play.

Priestly has created Birling’s character in this way to get his own beliefs of our actions affecting others and being responsible for each other as Birling voices the exact opposite views to the playwright. Throughout the play, a triangle of power emerges between Mr Birling, Gerald and Eric. However it is clear that it exists from the beginning of the play. When Eric interrupts his father just as he is about to make his speech, I would have him speak not too rudely but a bit cheeky as he says “well, don’t do any”.

Likewise, when Mr Birling does not let Eric finish his sentence as they were talking of war I would have Eric left with his mouth open trying to say something whilst his father does not even give him the chance to say it, thinking that whatever Eric has to say couldn’t possibly be of any importance, “Just le me finish, Eric, You’ve a lot to learn yet”. It seems that father and son are not very close at all, with Mr Birling not trusting Eric much and Eric disliking his father.

To show that Birling does not really notice his son, I would have Eric going back and forth between the table and the bar to get a drink, without his father even notice that Eric is drinking. In contrast to Birling and Eric’s attitudes to each other, Birling speaks more affectionately towards Gerald, “like one of the family”. Even though he makes no effort to hide the fact that he is pleased about the engagement because it would help his business, Mr Birling makes an effort to be nice to Gerald and the two of them seem to agree on most things.

Gerald and Eric in Play 'An Inspector Calls' by J.B Priestley. (2020, Jun 02). Retrieved from https://studymoose.com/gerald-and-eric-in-play-an-inspector-calls-by-j-b-priestley-essay 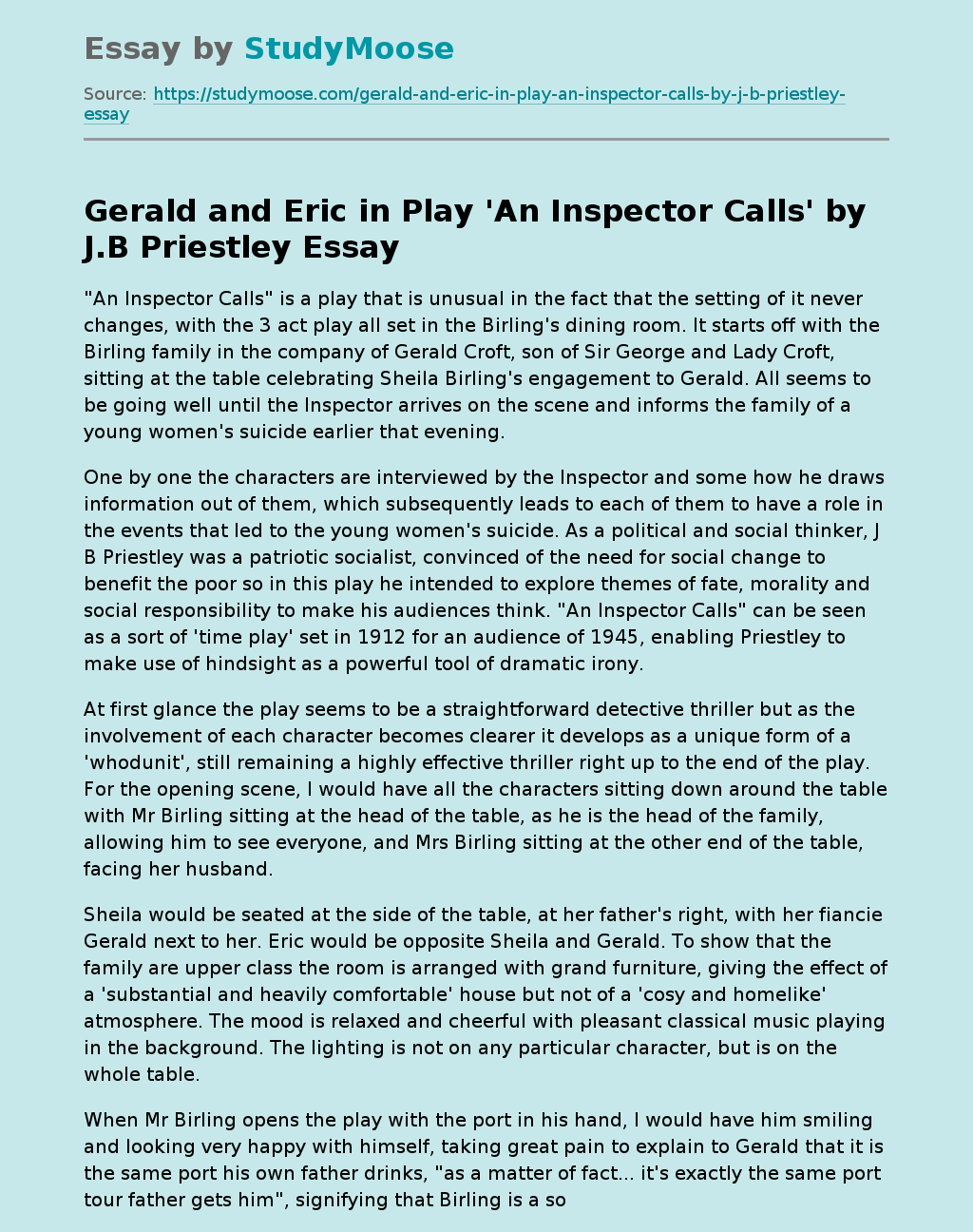