An Inspector Calls by J. B. Priestley

The significant era of the 1940’s had expressed the most rapid innovations within social attitudes since the beginning of the ‘Industrial Revolution’. This was primarily due to the advocating of the first ever-socialist government. The initial idea gained formidable support by a great majority of the public who began to realise the terribly, corrupt social injustice around them, with the importance of society. These also included organisations such as the Fabian Society plus many other influential characters like J. B. Priestley who produced pieces of work i.

Don't use plagiarized sources. Get your custom essay on
“ An Inspector Calls by J. B. Priestley ”
Get custom paper
NEW! smart matching with writer

Continuous campaigning finally contributed towards success on the general election of 1945. It was obvious that the devastating events of the Second World War had shared some connections with these fresh, rational ideas about ‘community’. In my views, it was the war in the ‘Home Front’ (back in England) that began to unite people from all classes, ranging from the rich upper class to the extremely poor working classes. Everyone was in the parallel situation of danger, so suddenly; money was no longer effective as power.

In these circumstances, the only option was working together side-by-side concentrating on near equal terms (regardless of past social disparities) for the same purpose. To me, this had been the first sign of a co-operative society in Britain. Even though this was forced together, I think the most relevant factor was that it gave vital experiences for the upper classes, especially: combining with the lower classes during the worst of times to realise the overwhelming advantages working as a society.

This was brought to real effect when success finally came in 1945 -the same year as the general election.

In ‘An Inspector Calls’, the author, J. B. Priestley chose to set the play in 1912 for the main purpose of highlighting his main message. This was because the period of 1912 was directly during the ‘Edwardian Era’ (1910 -1914) signifying the period with the most acute class divisions in England history had ever encountered: “With 87% of the country’s wealth in the hands of 5% of its population”. In fact, the worst economic and social events occurred during this short pinnacle of the capitalist dominance. Examples include the ‘Great War’ (First World War: 1914-1918) and the sinking of the ‘unsinkable’ Titanic (1912).

Therefore, because of these negative extremities in function, Priestley wanted a play that could illustrate the damaging effects of the past, and the moral implication -with the need to change for the future. The main message he wanted convey in ‘An Inspector Calls’ is that: “We are all members of one body”. What Priestley means by this is that everyone within any society depends on the efforts of everyone else in his/her society. This suggests also that progress itself is a product of the economy working together in a ‘symbiotic circle’ represented by the connotation of the word “body”; symbolic to the context of a ‘living’ body.

This implies the vivid message that if any of the components were damaged or missing (e. g. the lungs in the body) then the body (relevant to society) will fail, or worse: collapse all together. Priestley’s detective drama distinctively conveys the message that: “we are responsible for each other”. The main moral messages, especially towards the end of the play, vigorously supports the initial idea of a “body” and I think Priestley’s aim tries convey the fact that if his intentions are achieved, we will be getting closer to the goal of a ‘healthier’ society.

We can now see this play served a far greater purpose than simply to entertain the crowds of 1945. Focusing now on the content of the play: I noticed Priestley has created many dramatic devices to serve his message, but one that is recognised as the most central device is the concept of the inspector himself. Therefore, his dramatic entrance (in act one) is of great significance to the entire play.

This is chiefly described in how his presents was presented: by a “Sharp ring of the front door bell”-perfectly timed, to disrupt the climax of ironic references made in Birling in his immensely supercilious capitalist speech regarding how “A man has to look after himself”. His imperiously selfish views were propagated to directly attack Priestley’s beliefs relating to a community. This “nonsense” concept of community also directly contradicts the significant concept of a “body”; so now, it is up to the corrective purpose of the inspector to seriously challenge Birling’s eccentric, stereotypical capitalist ways.

The word “sharp” is used especially effectively to create a sudden, striking moment of suspense -just before the inspector’s surprise entrance: simultaneously halting Birling’s conceited speech. As Priestley has cleverly used the inspector as a mouthpiece of his socialist philosophy, his descriptive appearance is intended to emphasise an omnipotent, all-powerful effect, both for the Birlings’ as well as for the1945 audience. Many of his descriptive connotations distinctly illustrate this design; “he creates at once an impression of massiveness, solidity and purposefulness”.

Therefore, although the inspector “need not be” big in physical stature, but expresses his domination in a more psychological sense. These connotations suggest that he was immense in the manner of his movements, actions and expressions so establishing a manipulative atmosphere of power and control around the Birling family. In play, this is reinforced by the way he speaks: “carefully, weightily and has a disconcerting habit of looking hard at the person addresses before actually speaks”.

These qualities were vital of the role of the inspector that J. B. Priestley intended. Another effective dramatic device used to highlight the enormous contrasts before and after the inspector’s entrance was the rather perceptive use of lighting techniques. It was: “pink and intimate” before, emphasising the warm, pleasant ‘rose-tinted’ atmosphere- almost as if the Birlings’ celebration was held in a symbolic, restricting world of their own, yet feeling self satisfied in a naturalistic manner until the inspector arrives.

Then the lights become “brighter and harder”: breaking this confinement and revealing cold harshness of the realistic outside world. The metaphorical connotation of “brighter” suggests the inspector is also shedding light onto “harder” situation. The audience is now fully primed for the main action of the play… The inspector’s entrance and exit unifies the play in the way that it entirely satisfies Priestley’s ideas for promoting social change.

His entrance: as the ‘champion’ of the socialistic values is obviously in direct contradiction, therefore opposing the “nonsense” concept of community. In fact, it is no surprise that when Birling is attempting to transmit his selfish attitudes across to the younger men at his table, the inspector calls to offer us an alternative, because as soon as we realise, the Birlings are in for a lesson! His exit speech is intended to sum up all the key points mentioned (“We are all members of one body”) during the interrogation – putting the author’s philosophy directly across to the audience.

Social versus individual responsibility is the central theme that is at ‘the root of the left-wing social vision- underpinning the play. The structure of the play had been designed purely revolving around the intended function of the inspector, which is again, focused on Priesley’s indisputable ideas regarding society. This effective format of the inspector’s interrogation: in a “chain of events”, has provided many chances for his corrective influence to reinforce the Priestley’s message, and so express the comprehensive theme of the play.

The enigma of the inspector’s character at the end is central to its message in the way that his true identity remains mysterious throughout the play. But Priestley has given us some clues that indicate he may be symbolic not as a living entity but something beyond this. For example: the way he appears to respond as a warning from the future (proved by the end phone call) -this was just one interpretation of his supernatural qualities.

For me, his purpose is displayed to greatest effect by thinking of him as a concept, or metaphor of what he is symbolic to, making his existence much clearer in the play. This was why I think; not only has his character proved dramatically significant but more constructively, his representation. Probably the most discernible linguistic clue that Priestley has presented to us: suggesting that the inspector was symbolic to more than human, was through the connotations of his name. It is spelt: “G. O. O. L.

E”, yet also pronounced in the same way as the noun: ‘Ghoul’ which then brings a whole new level of meaning into his possible representations. The connotations of his name introduce the idea that he maybe symbolic to ‘a spirit that enjoys gruesome affairs’- in this case, the death of Eva Smith. Depending on the variations in perception of inspector Goole’s intentions within the play, he could be symbolic to a range of different concepts from a ‘Nemesis’, ‘Time traveller’, ‘religious character’ to the ‘Birling’s collective conscience’, or even as a mixture of these.

Different productions of the play also portray extremely dissimilar interpretations. For example, the 1945 national theatre production depicting him as a harsh ‘time traveller’ is the antithesis of the ‘benevolent ghost’ form of the inspector (which actually misses his aggressive, almost threatening final lecture in order to harmonise with his philanthropic interpretation) in the 1954 film- starring Alister Sims. For me, the most effective interpretation of the inspector is being symbolic to the Birlings’ collective conscience.

This is primarily because it is closely linked with Piestley’s profound beliefs for rapid change amongst social attitudes, and what more than conscience would motivated the idea of a swift social reform? After all, the only way in which we learn and improve is from our own conscience, neither by over punishment (Nemesis interpretation) nor by the contrast of undermining our mistakes (shown by the benevolent ghost).

Also, because everyone in the Birling family was involved in the case with their own complacent, self-interested mistakes, the inspector intended the family, as a whole, to realise their responsibilities in society, therefore, he is correctly emphasised as their ‘collective conscience’. Through the inspector’s representation, we also get a sense of where his sympathies lie; it is only in the last part of the play, just before he leaves, that we get an explicit statement of his, and indeed Priesley’s philosophy. In his call for collective responsibility for a social whole, we find the antithesis of Birling’s position.

An Inspector Calls by J. B. Priestley. (2020, Jun 01). Retrieved from https://studymoose.com/an-inspector-calls-by-j-b-priestley-essay 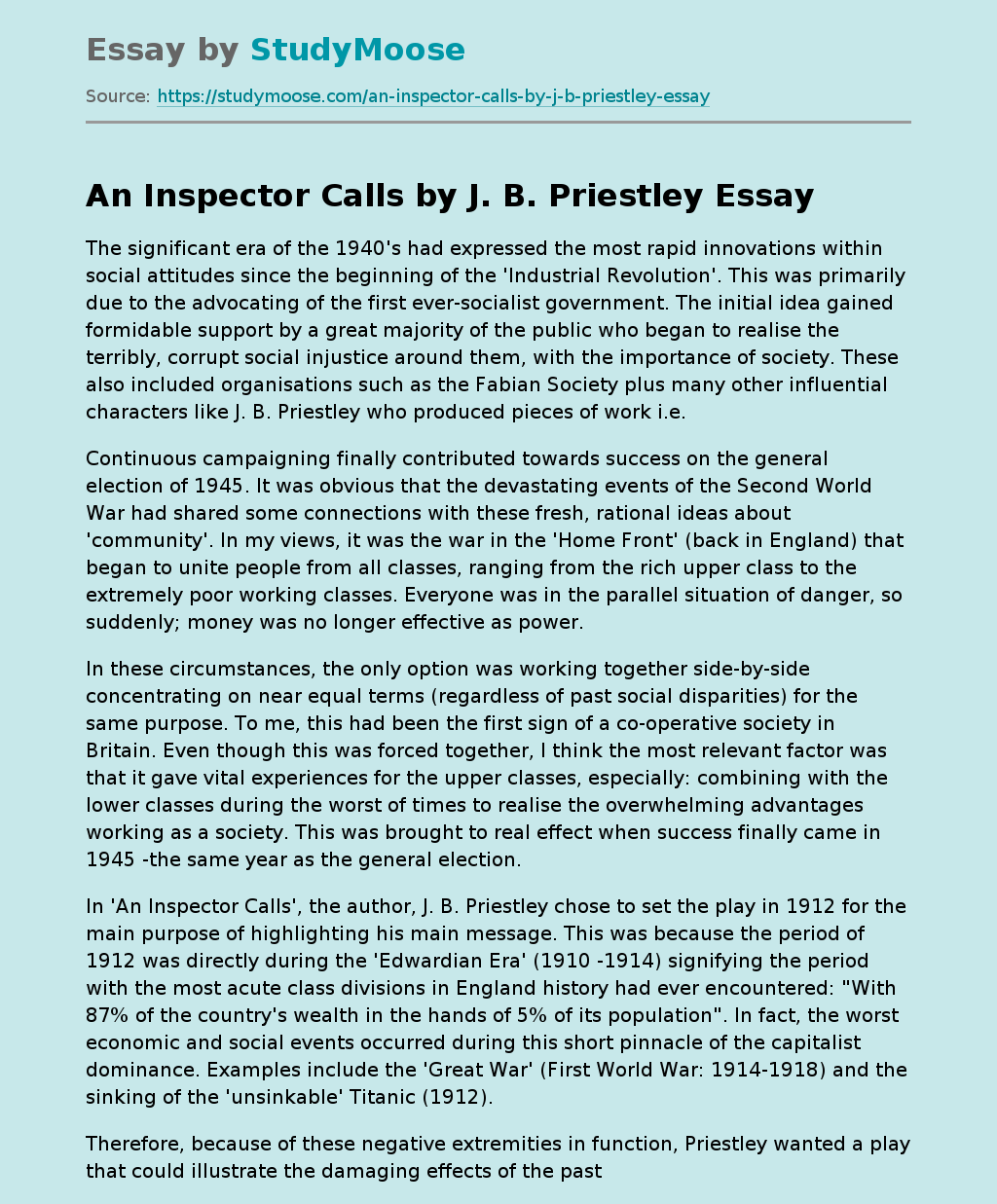