‘An inspector calls’ was written by J.B. Priestley in the early 1940’s but was set in 1012 and was first performed in 1945. This play is written about the classes and how the smallest things can change people’s lives for better or worse. The inspector is there to get messages across to the audience and to be the voice of Priestley and other socialists.

Mr. Birling is a vey confident and cocky man and thinks he is always right even about the future.

Don't use plagiarized sources. Get your custom essay on
“ ‘An Inspector calls’ J.B. Priestley ”
Get custom paper
NEW! smart matching with writer

When the titanic is due to set sail the next week he says “forty six thousand eight hundred tons-New York in five days-and every luxury-and unsinkable, absolutely unsinkable”. This shows that Mr Birling is confident the titanic will not sink; this technique is called dramatic irony. I don’t think Mr. Birling is at all popular with the audience because he is arrogant and extremely opinionated an example of this would be “we can’t let these Bernard Shaw’s and H.

G Wells’ do all the talking.” This shows Mr. Birling wants to be centre of attention and doesn’t think anyone else is better than him.

Inspector Goole is a man with a strong stage presence and he is very powerful, this is portrayed in the RNT production of this when he comes home on stage and there is a change in music and the front of the Birlings’ house opens up like a dolls hose and every one is silent apart from the Inspector. The Inspector is completely in control of the situation and is quite bossy, we can tell this when he states “I would like some information if you don’t mind”.

This creates the impression that he is imposing and determined to get the bottom of the suicide case. Also the RNT make him sound very powerful by making his voice very over powering. I don’t think the audience would like him because of his state of mind and that he thinks everyone is inferior. We can tell this when he says “he must wait his turn” showing he likes to have control and is in charge and very imposing.

Mr. Birling reacted annoyed towards the inspector and got defensive saying that he was friends with real police inspector. He stated “I ought to warn you that he’s an old friend”. This shows us that the Inspector was offending Mr. Birling and Mr. Birling was trying to scare the Inspector by threatening him. The Inspector likes to know better than Mr. Birling and always wants to be right. We can tell this because he says “no sir I can’t agree with you there” this indicates that the Inspector thinks he is always right and like to make people think he to always right, this suggests he is sure of his beliefs and wants to correct Mr. Birling. In the course of the play the Inspector says a few unusual things that you defiantly would not expect a real police inspector to say such as; “we often do with the young ones. They’re more impressionable; this to me creates the impression that the Inspector is trying to persuade Shelia to tell the truth but not to necessarily punish her but to teach her a lesson.

I think the Inspector makes Shelia feel puzzled and confused about his visit and possibly feels responsible. We can tell this when Shelia says “I don’t understand about you.” This makes the audience pity Shelia also the audience may not understand why the inspector is questioning her.

We know the Inspector starts getting impatient and angry with the Birlings because he says “don’t stammer and yammer at me again man. I am loosing my patients with you people.” This shows the Inspector is loosing his patients because the Birlings aren’t answering the questions directly. The Inspector manages to get Mrs. Birling to condemn her own son by getting her to say how much blame should be on the girl’s boyfriend, so the Inspector knows how to deal with Eric. The inspector does this by asking Mrs. Birling what she would do to the boy if she were the police Inspector and the amount of blame that the boy should have. She insists that “he (the father of Eva’s child) ought to be dealt with very severely”. This means that Mrs. Birling thinks that the father of the baby should be more labelled as responsible than Mr. Birling.

Before the Inspector leaves the Birlings’ home he says “And I tell you that the time will soon come, when if men will not learn that lesson then they will be taught in fire, blood and anguish.” This creates the impression that if humans don’t stop being horrible they will be punished in war or maybe hell. The Inspector’s warning is that humans will suffer if they make other people suffer. I think this is the voice of God because in the Inspector’s final speech he says ‘one body’ which is used in the church meaning the congregation is one community. I also think this could be Priestley’s voice because Priestley believed everyone was important like each part of the body this was because he was a socialist.

The role of Inspector Goole is to make people feel remorseful and suffer the consequences of there irresponsible actions. We know the inspector wants to get his point across that people need to be more responsible for their actions when he says “if men will not learn that lesson then they will be taught in fire, blood and anguish.” This shows that people will go to hell or a war will brake out. I think the Inspector is more than just a police inspector because he really makes the Birlings think about their responsibilities of their actions, also that they should prevent this happening again. “one Eva has gone- but there are millions and millions and millions”, this shows that the Birlings should just help others and stop another suicide due to being turned down and let down when help was urgently needed. The Inspector is used as a dramatic device to make Priestley’s view get to the audience and is used to make the audience feel sorry for Eva and feel pity for this innocent young girl.

This play shows us that people should not be divided because of our social status. Priestley shows this through Shelia when she says “you mustn’t try and build up a wall between us and that girl. If you do then the Inspector will just break it down.” This shows that Priestley is determined to stop separating people according to their social status, like a wall separates different things classes separate different types of people and Priestley wanted this to be demolished. Eva was treated very disgracefully and was denied a pay rise as a last resort after already striking, which would have saved her life. “They wanted the rates raised so that they could average about twenty-five shillings a week.” This shows that even a tiny bit of money could have saved Eva’s life. This play shows that there was industrial unrest because people were loosing there jobs and striking, such as Eva. The Birlings believe that the working classes should have little/no rights. I in this play we learn that for the working classes, the conditions were very harsh and unhygienic. The wages were very low and sometimes were not sufficient enough to afford the bases in life. I think if Eva was around today she would have got lots of help including; a council house, money (benefits), help with her pregnancy and with her baby.

I agree with Priestley’s moralistic ideas because he believes everyone is equal and should be treated equally, that money does not make you totally happy, no body is superior and that when possible we should help others, Priestley puts this idea forward through the Inspector when he said “we are reasonable for each other”. This shows us that Priestley wants people to value others lives and help if you can. I think Priestley’s message is still extremely important today although times have changes, and things are much better than they were, there is still room for improvement and there are many people that need help in their lives. There is still a gap between the rich and the rich don’t help the poor even when they could help. In a sense the world still has many problems to do with the poor and this can result in war which does happen. The fact that war is still occurring suggests we, as a modern day audience, can learn from Priestley’s message. I think an audience would respect all the messages in this play. 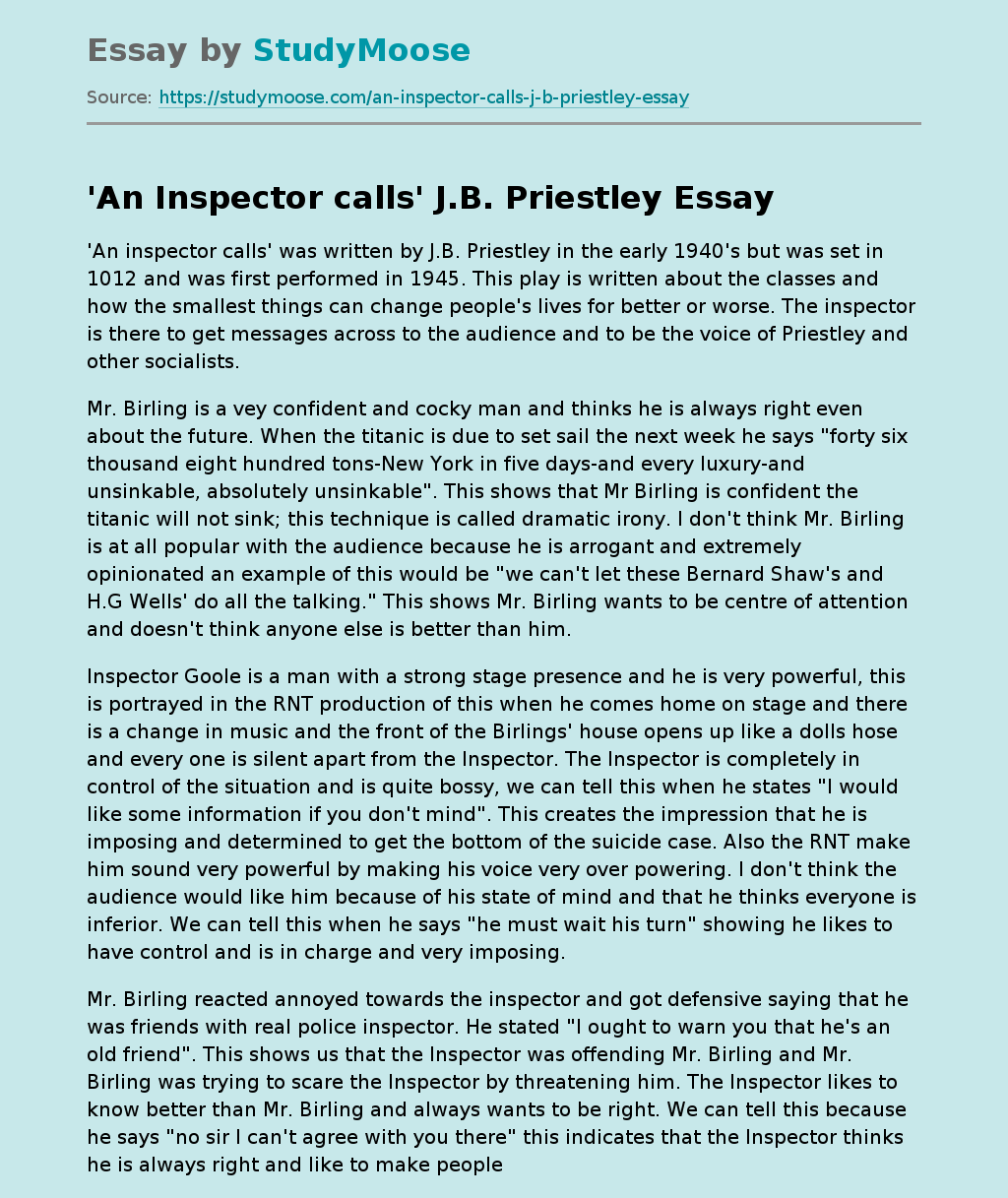